Co-written by Chak, Lydia and Jo-Lyn

Just a few days ago, Harian Metro wrote a story about how cats are being skinned and sold for its meat, right in our own backyard. Needless to say, this news has made cat lovers claw back, asking everyone to be on high alert while condemning the practice of eating our fuzzy friends. 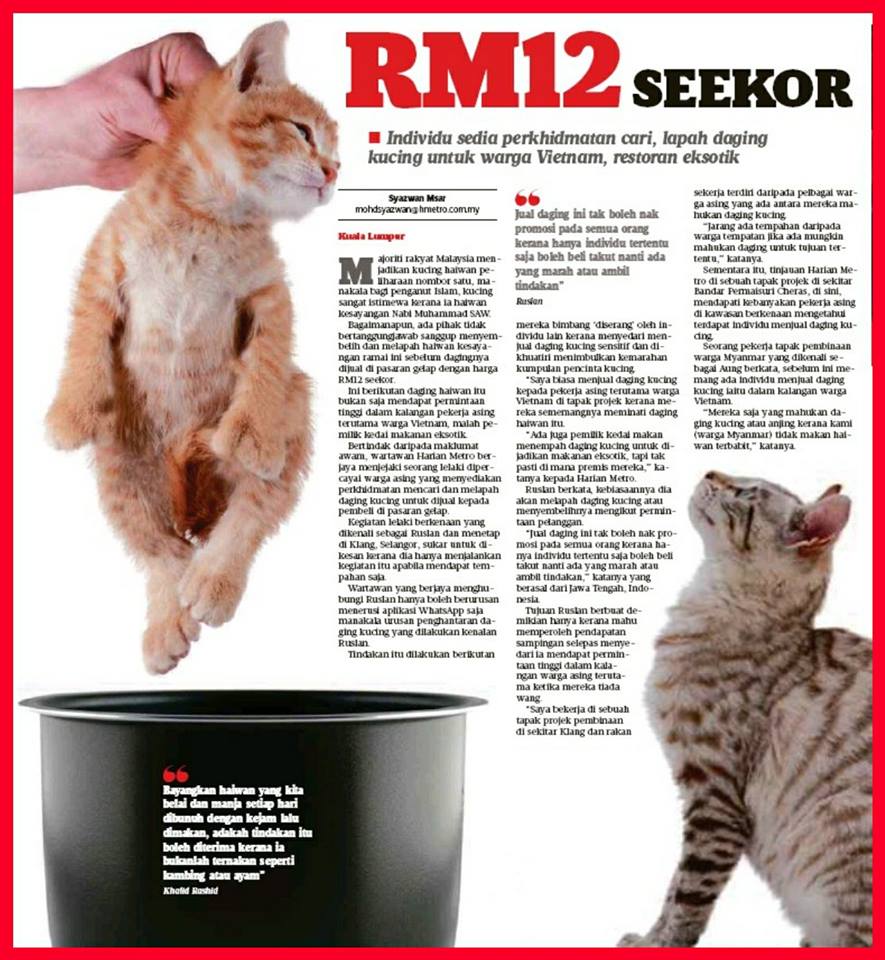 The Harian Metro story. To read the article in full, click here.

According to the article, the meat is regularly sold in the black market and is priced at only RM12 per cat. Their source, a certain Mr Ruslan, an Indonesian based in Klang, said that he would capture cats and skin them for their meat. He only does it when there is a demand, so… no order, no service.

After preparing the meat, it will then be delivered to the buyer through someone else. As for his clients’ identity:

“I usually sell cat meat to foreign workers, especially Vietnamese workers who are based in project sites, because they are interested in the meat.

There are also shop owners who would order cat meat to be made into exotic food, but I’m not sure where their premises are.” – Ruslan to Harian Metro (translated)

As he works in a construction project site, he said that some of his colleagues who are mostly made out of foreign workers, have very high demand of cat meats. “It’s rare that I get orders from Malaysians,” he adds. “If they want it, it may be for specific reasons.”

He adds that he doesn’t promote his work to everyone, only certain individuals, because he’s afraid of people taking action against him. At the same time, he says that he’s only doing this because it gives him some extra pocket money, and there is also very high demand among other foreign workers.

Actually it’s not illegal to eat cats and dogs in Malaysia (!)

Tempting you. Images from bestproducts.com and HD Wallpaper Daily

According to the Malaysian Animal Welfare Society, the law does not prohibit people from selling or eating cat and dog meat. This knowledge came to light in 2013 after Malaysian Independent Animal Rescue (MIAR) rescued an abused dog from allegedly being eaten at a restaurant in Kampung Melayu, Subang. Similar to the current cat case, the activity was exposed after a tip-off from a member of the public.

Although it is not illegal, the thought of eating cats and dogs might be quite geli la for most Malaysians, because we see them as beloved pets (more on this at the end).

“This is ludicrous. Basically it is not illegal, but horrifically uncivilized and unacceptable. I would liken it to cannibalism. Don’t we have enough to eat already? We have become so greedy that we’d eat anything at sight.” – Shenaaz Khan, President of the Malaysian Animal Welfare Society, The Star

But what about the laws in other countries? We found out that it is definitely illegal in Singapore, according to their Agri-Food and Veterinary Authority (AVA). In fact, Singapore had banned this practice for some time now. In the Philippines, it was first banned in Manila in 1982, and subsequently banned nationally in 1998, though the it’s still rampant in the black market. Very recently, Taiwan also joined the ranks by banning the selling and purchasing of cat and dog meat, though it is legal to eat them. Singapore ‘Growing Up’ actor Andrew Seow exposed a dog meat seller who approached him in 2016. Image from straitstimes.com

Unfortunately, in Indonesia, the appetite for cat and dog is growing. 🙁 Then there’s South Korea, where the practice is not outlawed either. And of course, some of us are familiar with the famous, or rather infamous Yulin meat festival in China. But seriously though, why do people eat cats and dogs?

NAH, BACA:
How one Kelabit woman is single-handedly trying to save her people's culture

Outside of Malaysia, taste buds are a little bit different… People eating a dog dish at the Yulin meat festival in China. Image from BBC

The first thing we did was to ask our Vietnamese friends. All three of them said that they DO NOT eat cats, or dogs for that matter. So we Googled and here’s what people had to say: “I’m not going to lie to you…dog can be really delicious,” says one Western traveller who ate dog in China. And then in Vietnam: “Eating cat meat is better than eating dog as the meat is more sweet, more tender than a dog,” says a Hanoi chef at a cat meat restaurant.

Besides the taste, there are other reasons people eat cats and dogs. One is because they are poor! Our Vietnamese friends, Tony Tran, told us that dog meat is generally more popular than cat meat, however it is more widespread in North Vietnam than any other parts of the country.

“North was poorer during the war time so they eat everything. The North is colder too and dog meat is heaty food. So it keeps them warm.” – Tony Tran told CILISOS on Facebook messenger Do you remember this picture? This was a devastating moment a North Vietnamese child finds her missing pet dog cooked at a stall. Image from Daily Mail

We read that the Vietnamese poor ate insects and rats too in a desperate attempt to stay alive during the war. So it just became a habit to continue eating that stuff today. Cases of consumption in Taiwan crop up usually in rural areas and places where living conditions are poor. Same as Indonesia.

“From a strictly practical, agricultural point of view, growing dogs and cats for meat requires far less space and feed resources than growing cows, and is therefore cheaper.” – Brad Anthony, Canadian animal protection researcher and analyst based in Singapore, The New York Times

Thirdly, Tony adds that it has perceived health benefits. The Vietnamese strongly believe eating dogs is good for eye sight. This concurs with the articles we read online, where one customer in Indonesia talked about the traditional belief that it has warm energy (heaty), and South Koreans believe it increases sexual stamina.

One man’s meat is another man’s pet Joey and Chandler kept a pet chick and duck

In light of the whole Harian Metro article, cat-lover groups are calling for owners to keep their cats safe from being captured. Buuuttt, to be fair, the article didn’t say where these cats come from. Were they stolen from homes? Taken from the streets? We don’t know for sure.

Did you know that the RSPCA actually has an entire page dedicated to keeping chickens as pets? In fact, Google most animals meat available at your resident nasi kandar, and someone somewhere in the world keeping them as a pet and would be horrified at us eating them.

We are all conditioned in different ways on what is taboo to eat and what’s not – this is called carnism. It describes how different cultures view different animals differently, and while we do understand the outrage on the eating of cats (and totally emphathise as a 50% cat loving office), it’s also important to realise that other people don’t have the same taboos.

BTW the other 50% of the CILISOS office is a combination of dog/hamster/budgie/Alaskan bull worm lovers. And we reckon people who keep cockroaches as pets would totally be shocked at how cruelly we treat those 6-legged uglies in our office.