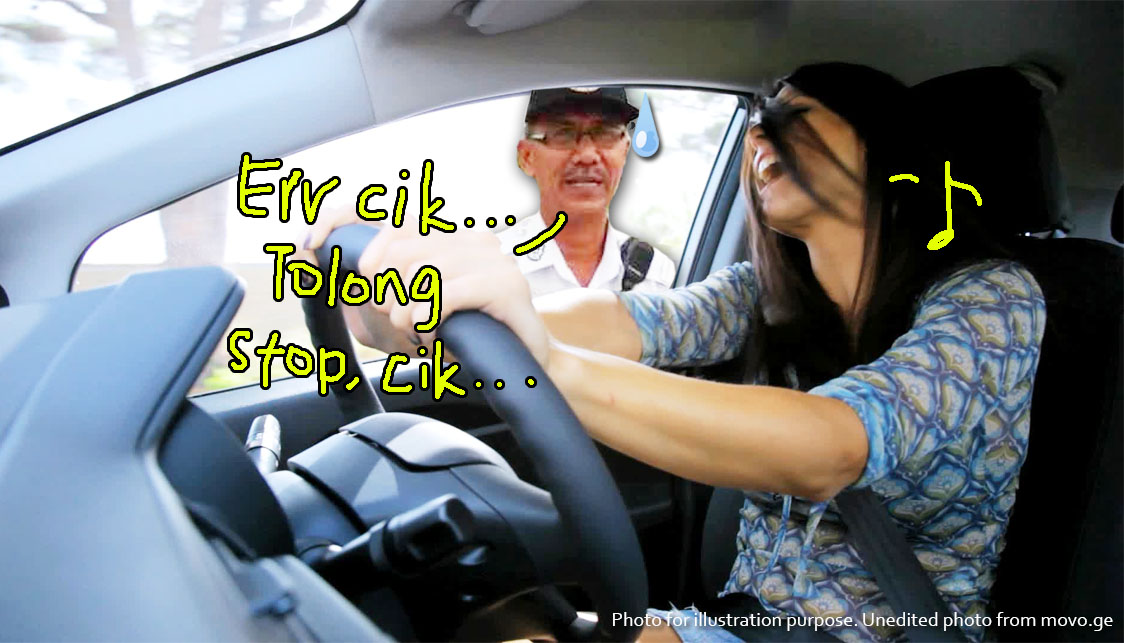 As we’re at the end of the fasting month, we recall a few FB posts on our timeline complaining about authorities crampin’ their styles. Whether for looking suspicious in a car or getting chastised for not puasa-ing, one can’t help but wonder if the authorities are getting a wee bit ridiculous during the month of Ramadan.

“We were in a MASSIVE jam in Kota Damansara and turns out it was a road block. Then they go and stop our car and started questioning my friend who owned the BMW 3-series, asking for I/C and license as though he stole it.

What- I mean- How- I mean- What?! How are they profiling us? Why are cops so ridiculous during Ramadan?!” – Our Editor-in-Chief last week

We’ll address the huge elephant in the room later, but at this point we wanna know…

Anyway, we asked around for stories of people being ridiculously ‘cop blocked’ (being stopped by authorities) and here are the responses:

1. The girl who was singing and got stopped for using her phone In 2013, Balqies Zaed was driving to work on the MEX when she found herself at a road block near the Mid Valley exit. She was already behind schedule when the cops asked her to pull over. According to Balqies, the officer was about to give her a summon, but she questioned him immediately:

As it turns out, a then-pregnant Balqies was singing her heart out but got mistaken for using the phone. And when she defended herself, the officer accused her of lying. Her phone was all along in her handbag, which was placed safely in the car’s boot. As she walked to out show the officer her boot, he noticed that she was pregnant.

“He realised I was pregnant and then apologised because he ‘salah anggap’. I think they realised they couldn’t pull a fast one on me…”

2. The one who drank Milo in plain sight

A few weeks back, Red FM DJ JayDee got cop blocked near the NKVE/Subang Airport exit for supposedly using her phone while on the road. But her phone was in her bag, and in her hand? Neh: 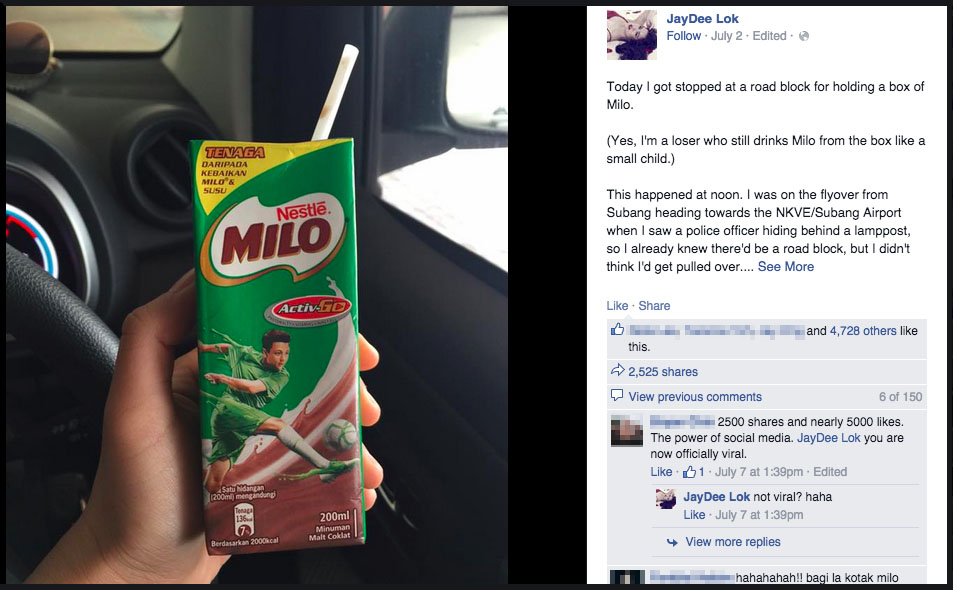 It’s an app that lets you DRINK on the go! Screencap of Jay Dee’s post from Facebook

According to JayDee’s Facebook post, the cops insisted that she was using her phone even after she explained that her phone was in her bag. It’s not that she didn’t see the cops though – she saw an officer hiding behind a lamppost, but she continued to enjoy her drink. (Cos hello it’s not an offence ok?)

So when the officer told her that she was stopped for using her handphone, JayDee spent a good six minutes arguing her case. The following was written by JayDee herself, and we’re leaving it as is ‘cos it’s so expressive :

After a while I get thoroughly annoyed (and was running late for work) so I go, “Eh ni memang fitnah lah. I tak pegang handphone langsung. Fitnah!!! Where is your proof? Do you want me to call a lawyer? You ingat I tak tau undang-undang perjalanan???”

Then they walkie-talkied the police man that was standing behind the lamppost and he says, “Ya. Pakai handphone. Tangan kiri.”

Then they said something super insulting…

Finally they get fed up and they tell me, “Okey. Pergi lah. Kalau you ingat you memang jujur, you drive je la. Nanti you kena accident atau mati, haaa itu sebab you ingat you jujur sangat”.

… and what she said next WILL BLOW YOUR MIND!

I wished him Salam Ramadhan and drove off.

3. The tattooed guy who didn’t seem like he could own a BMW

Here’s another name we bet you’re familiar with. Two years ago, radio DJ Pietro Felix was driving his BMW 3 series near the Mont Kiara end of Penchala Link when he was pulled to the side of a roadblock. It wasn’t for drinking, it wasn’t for indecency… It was because a tattooed guy didn’t look like the kinda guy who could own a nice car. 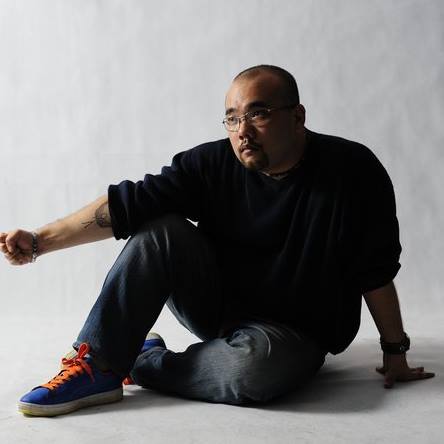 Spot the tatt! (Ok la there are more under his baju.) Photo courtesy of Pietro

“I got pulled to the side of a roadblock because I had tattoos. According to the cop, since I had tattoos it meant I could not afford the car I was driving which was a BMW 3 series. Because people who have tattoos cannot get high paying jobs to afford a BMW.”

He had to prove that the car was his by showing legal documents that the car belonged to him. Although it didn’t take much to convince the cops, they said that Pietro must be a gangster and had used gangster money to buy the car.

So at that point, Pietro whipped out the fancy badge (his Astro tag) and showed the cops photos of him on TV. If you didn’t know, Pietro used to host a show on Astro Arena. Pietro has been on TV… On many TVs… (Photo from Pietro’s blog. Click to read!)

“Then I showed them my Astro tag and photos of me on TV and they were shocked that a person with tattoos can appear on TV in a coat and tie where my tattoos not visible. Go figure.”

4. The guy who got scolded for eating… in a food court.

Haaave you met CILISOS freelance writer Peter Nunis? With four types of ethnicity running through his blood, there’s no wonder why he’s blessed with such good features: 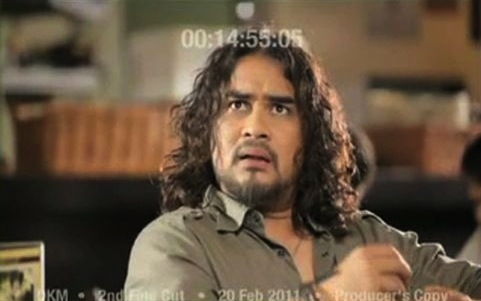 And that, dear readers, makes it difficult during Ramadan. About three to four years ago, Peter was cop blocked at a food court in UOA where a couple of police officers apprehended him for eating.

“They told me, “You Muslim makan tengah hari, tak tau Ramadan ke?” Then I told them that I’m not Muslim, I’m not even Malay, but they insisted that I was.”

Peter then showed his I/C to the officers, which stated in point blank ‘AGAMA KRISTIAN’. However, instead of apologising for wrongly accusing him of eating, they continued to chide him.

“They said, “Orang Kristian takde otak makan depan orang yang puasa.” After they left, I only had one thought in my mind: why are you ronda-ing a food court in the middle of puasa then?”

Walao! Why all these cops macam extra ridiculous during Ramadan?

But actually right……… There were more readers and friends who shared that they’ve had odd experiences during non-Ramadan days, so it kinda looks like funny encounters happen during other months, too.

And femes CILISOS writer Uihua, who has all sorts of weird tattoos (including a Doraemon eating his right nipple), has had three cop blocks because of that. And because of this particular smart-a$$ tattoo… … the cops questioned him if he was part of a ‘geng jam tangan’. Apart from the kiddo gang name, maaaaybe it kinda makes sense to ask questions as some gangsters use tattoos to associate members which each other. (We’ve watched enough ghetto movies to know that.)

And unlike Pietro who had a blinding torchlight shining into the car, the cops actually did a complete search on Uihua’s car. Now, Uihua leaves a long-sleeved shirt in his car to cover up at road blocks.

So they’re not doing it for extra duit raya?

Ok ok we’re gonna try addressing the huge elephant without pissing some people off. It’s widely believed that cops are always on the hunt for ‘duit kopi’, especially more so when it’s closer to Hari Raya as expenses soar… so could their ridonkulous cop blocks be an excuse to ask for duit kopi?

Well…. CILISOS has no answer to that since obviously you can’t find solid data like that being published anywhere la right. From new clothes to a hearty meal, the festivities also mean forking out mo’ moneh. Photo from Flickr user phalinn

Dzul*, a PJ-based traffic police officer in his 40s, who told us that lower ranking traffic officers earn from RM1,300 whereas their superiors earn from RM2,500.

And let’s be honest – with such low salaries, how la wanna settle monthly commitment, buy Baju Raya, decorate house, give Duit Raya, prepare a feast, etc.? Plus, low salaries have been linked to the problem of corruption in the force.

But whether or not they’re extra vigilant during Ramadan, that’s another question altogether. It’s actually during this time that operations go down, such as Ops Selamat which has been going on since 2001. It’s not exclusive to Ramadan – these ops happen during major festive seasons including Chinese New Year, Deepavali and even Christmas Day.

BTW, Ops Selamat was actually Ops Sikap in the past, but according to a top traffic cop in Bukit Aman, the former needed a rework.

“Those days it was Ops Sikap because it was only traffic-related. […] Ops Selamat is about total enforcement.

Three years ago, we advised the public to drive slowly, don’t jump queue, be patient. It didn’t work. Accident cases and fatalities went up, so this year it’s going to be total enforcement. We have given ample warning: if you don’t adhere to the rules, we will take on-the-spot action.” – Senior Assistant Commissioner Mohd Fuad Abdul Latiff (Bukit Aman) in a 2014 interview with Sunday Star

So that may answer the question about whether or not cops are being extra vigilant to the point of annoyance.

But off-road, religious authorities (and cops!) may stop Muslims who eat while supposedly fasting during Ramadan as Malaysia is one of the countries which criminalises this act. Section 15(b) of the Syariah Criminal Offenses (Federal Territories) Act 1997 states that any person who eats/drinks/smokes in public will be prosecuted, which is why people like Peter have to deal with judgemental eyes everytime he goes out for lunch during Ramadan.

But why are they such jerks tho?

Perhaps a running trait we’ve seen in most of these stories is unnecessary rudeness. We’re pretty sure ‘be a jerk while on the job’ isn’t in the police guidebook. (OR IS IT??)

This Poskod.my article shows the struggles of non-Malays who look like Malays, who by now have found it hard to eat in public during Ramadan. It wonderfully detailed several incidents of mistaken identities, with some being decent and polite while others with jerkiness level 9000.

While we could attribute their rudeness to having a superiority complex, it’s only fair to acknowledge that they’re not all – or always – like that. Let’s not forget the times where cops went beyond their duty to help the rakyat, yeah? 🙂 Regardless of the awful perceptions most Malaysians have about the authorities, it’s still their duty to serve and protect.

But if you’re ever caught in a sitch with the authorities, just try being as sweet as you can. It wouldn’t hurt to be the bigger person, cos it may even land you a get-out-of-jail-free card.

Like our Editor’s friend, Edwin Ng who got caught driving while using his phone:

“He wanted to give me a summon, but I pleaded with him. He spoke in really good English and said, “Okay, I will let you go if you can lafaz the whole Rukun Negara.”

I only managed to lafaz 4 of verses, but he helped me with the fifth. And then he said, “Okay, don’t do it again.” Then he let me go. I was so bewildered.

He was so well-mannered, I don’t even mind paying the summon if he issued one. You’ll hardly see any patrol ‘white leg’ cop without belly or moustache for that matter.” – Edwin

Or this clever chicka who didn’t wear her safety belt:

And yes, these two happened during Ramadan 😀

Share this article:
NAH, BACA:
How much does it cost to have a funeral in Malaysia? We calculate.