[This article was originally published on 21st July 2014.]

With all the negativity surrounding our country recently, we at CILISOS think that it’s time for a short breather. Good vibes are in need.

Just last week we were heartbroken by the shock that was MH17 and its 298 passengers’ death, way before we could fully recover from the MH370 incident. But just a day before that, we got our feathers ruffled at Kiki’s racist remarks and violent behaviour, and played disciplinarian by commenting our thoughts, creating Facebook pages and even stalked her at her home.

And a short moment before that, we were enraged with Bung Mokhtar’s Hitler comment and his less-than-apologetic tweet. We hit back against Tengku Adnan’s orders to close down soup kitchens helping the poor and homeless, starting a kickass movement to nullify his words.

The list goes on, but let’s get back to the present.

This is undeniably a hard time to celebrate what should be a joyful and peaceful month of Ramadan, so let’s ease in the transition by remembering the good in people. Or rather, the good in these awesome Malaysians, who stand as one regardless of race and religion. Let’s remember the best of us.

We take a look at six outstanding acts of kindness which have restored our faith in humanity:

UPDATE 24 July 2014: As suggested by one of our commenters, we have removed any units of measurements of kindness. We agree – kindness should not be measured 🙂 Thanks for helping us realise that. It’s in almost 6pm and your tyre goes bust in the middle of Federal Highway (for those of you who have no idea where that is, it’s one of the nation’s busiest highway. Also known for mysterious traffic jams at 10pm and ghostly encounters). You’re in a sweater, sweating away in the heat while angry motorists honk at you for creating yet another jam they have to endure. You try to change the tyre yourself with crappy stock equipment, but even with all your powers combined, the nuts just won’t loosen.

Lucky for Phyllis Kong, a traffic policeman came to her rescue when he stopped to check on her. While the first thing we’d think he’d say is a tacky I-scratch-your-back-you-scratch-mine offer, 26-year-old Syed Hazril Erza proved to be nothing like the Malaysian policemen stereotype.

In short, Abang Polis helped her change her tyre, realised it was out of air, escorted her to a petrol station to pump it up, realised there were more problems with it and escorted her to another petrol station with a tyre shop. Getting a police escort also gave her the feeling of being a minister, running a red light and stopping incoming traffic to let her pass. Bet you wish how that felt, right? Cos we at CILISOS are kinda a little super jealous right now. Well, Abang Polis didn’t go unappreciated for his deed in September 2013. Phyllis’ Facebook post went viral  to the point where her saviour in a suit even caught Najib’s attention. 2. Cikgu-of-the-year who gave a fasting cashier juice and biscuits Tropicana Twister’s PR team should be extremely happy, too.

Who could forget the heartfelt story told by Raven Murugesan during last year’s Ramadan? The 50-something school teacher’s Facebook status narrated his experience when he offered a tired cashier some orange juice and biscuits for an express ‘buka puasa’ nom. The Chinese gentleman behind him ‘sportingly nodded’ in approval, giving the cashier a quick 30-second break under the counter before returning with tears in her eyes. In an interview with MSN Malaysia , Raven said that he reacted in that manner because it was a ‘built-in mode’ which came with his profession. Having raised in the olden days of unity, he recalls his childhood days: he would sleep over at his Malay friends’ house for nights (and vice versa), Indian weddings would see Chinese and Malay youths working together to decorate the house, children could mingle freely and without prejudice, everyone could peek into the lives of each other, he would call his friends’ Mak ngah as ‘Mak Ngah’, while his friends would call his uncle ‘Chittapa’… Now doesn’t that sound like something out of an advertisement? Like something you’d see in yet another dreamy, wishful-thinking 1Malaysia campaign?

But it ain’t. This shizz is the real deal.

“The excitement of friendship and the depth of unity were not moulded by advertisement or promotions,” he tells MSN Malaysia. “What we have now is a formally devised platform to integrate, which is not natural. It gives that ‘fake’ feeling. I personally feel that sections of our society have isolated themselves for various reasons.”

“When I was in Year One in 1970, my shirt was accidentally torn because one of my friends pulled it. My teacher, a Malay lady immediately called me and gave a brand new shirt which she said she had bought for her son. I never saw her as my teacher after that. She was my hero, my mum. That is what we need amongst our young teachers.”

Seems like the 70’s were an awesome time to be a student. What ever happened to the quality of our teachers? That’s a story for another day.

3. Lorry driver who risked his life to rescue a couple 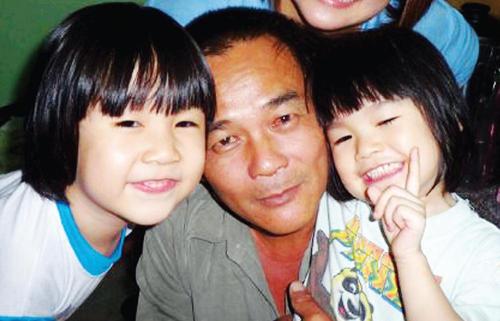 A hero and a loving father. Photo from lanunsepet.blogspot.com

In April 2011, after celebrating his 52nd birthday with his family, lorry driver Ong Kim Koon saw an accident involving two cars along the MRR2 at about 1am. After pulling over, he rushed to rescue a Malay couple who were trapped in their wrecked car. Whilst he managed to pull Rosamiah Hashim, 38, out of their Perodua Viva, he was hit by a Toyota Estima while trying to rescue Zainal Yusoff, 45. The driver who drove the MPV fled the scene. (Estima driver, if you’re reading this, do know that you’re a total jerk.)

Doctors planned to amputate his leg which was infected, but postponed the surgery because of his weakened condition. After 11 days of coma, he passed away. We have our utmost respect for the man who risked his life to help strangers. Photo from lanunsepet.blogspot.com

Although it has been three years now, our thoughts are still with his family. For a man who risked his life to help another, Kim Koon was undoubtedly a hero in the disguise of an everyday man. A neighbourhood guard fills up the water tub in Rizal’s house. Photo from thestar.com.my

Just a few days before the major water rationing campaign began in Selangor, houses in Cheras were already suffering from water disruptions for days. In fact, it is considered the worst water disruption to hit the area since 1998. Homeowner Rizal Mohamad and his immediate neighbours in Taman Damai Murni were one of the few lucky ones with proper water supply unlike the others who lived a few rows away.

Uncle Rizal was a total sweetheart, providing free water to his neighbours throughout the period. Two water tubs – which he’d constantly fill – were placed outside his house for people to use. He’d also allow the neighbourhood guards to enter the house to refill the tubs whenever they were dry. Three buckets were also laid out to help scoop water out of the tub.

Pretty easy for us to empathise, especially after we’ve gone through three and a half months of water rationing. Oh, the torture. 5. Macha who gave his word… and honoured it well Earlier this year, Only in Malaysia, a Facebook page highlighting everything in Malaysia (duh) posted up a story about how an Indian man came to the rescue of a motorist who ran out of petrol. Where did this happen? Federal Highway, again.

In this descriptive status, the driver was dangerously and helplessly stranded in the middle of the highway during the morning rush hour traffic. Shortly after calling her dad and sister for help on the phone, a Indian motorcyclist stopped and asked her about the situation. He asked her to pass him some money so that he could buy some petrol for her. Here’s what he said right before he left:

“You tunggu saya, I mesti balik punya.” (Wait for me, I’ll surely come back.)

After 25 minutes of waiting, she was down with doubt and disappointment. All of a sudden, the macha appeared right in front of her and helped refuel her car using a half-cut mineral bottle as a funnel. This macha damn clever.

In no time, readers who read the viral post identified him as Vaasu Thevan, who in an interview with THR Radio said that he would always help people despite being looked at suspiciously. He also recalled an incident where he tried helping a stranded motorist on Pantai Expressway, but was declined as someone else was on their way. At 3:30am, he was informed about an accident in the same area and found out that it was the very same person who declined his help. The motorist had died, leaving him troubled and sleepless for a week.

Vaasu hopes that Malaysians would do more than staring and ignoring. Instead, they should spare some time to help their fellow countrymen in times of trouble.

6. Incredibly brave, young man who gave his life for others

This just in from The Star…

This is a heartbreaking story of one Malaysian who selflessly laid down his life for three others. What was supposedly a fun, summer business trip to Japan for purchasing officer Tan Hee Shiang, 21, turned into an incredibly touching yet tragic story. The Star’s report on Hee Shiang’s selfless, yet tragic story

According to the report prepared by Beh Yuen Hui, Hee Shiang, his Malaysian colleague, and their Japanese partner went jet-skiing at Sat­suki Matsubara Beach in Muna­kata City, Fukuoka. While he and his colleague shared a jet-ski, their partner and his two female Japanese friends rode another.

The Sun Daily also reported the news, stating that three hours into their beach outing, when Hee Shiang saw his partner’s jet-ski overturn, he rushed to their rescue. He let the partner and one woman ride on his jet-ski, while he and the other woman were pulled back to shore by a rope attached to it. Unfortunately, he was nowhere to be found when they arrived at shore. Outpouring of sympathy from netizens. Screencap of from The Star’s Facebook page.

Thank you Hee Shiang, for reminding us that heroes need not have a superpower or a costume. They come with selfless hearts and incredible bravery. Our hearts are with his family and friends.

Warms your heart, doesn’t it? While we endure the occasional racial fights on Facebook (among others), remember: it doesn’t reflect the rest of us. These little nuggets of positivity restore our faith in Malaysians humanity, rubbing our backs whilst saying, “Hey, maaaybe we’re not that bad after all.”

And you know what?

These are but six of the many, many, many other heartwarming incidents happening throughout our country. We darn well aren’t that bad, at all!