Imagine being able to walk down the streets of Shanghai without people asking you “You want girl?” or light a cigarette on Orchard Road without being fined. Well, Google has made these impossibilities possible! If you use Google Maps and haven’t checked out Street View yet, you’re totally missing out, man.

Street View is this awesome feature that gives you a 360º view of a place while allowing you do “walk” down the street via the on-screen directional arrows. It’s really hard to describe in words, so you can experience it for yourself by exploring Bangsar below (click and move your mouse to look around and click on the onscreen arrow thingys to move):

A few weeks ago Google invited us to Tioman for their World Oceans Day event, held in collaboration with the Malaysian Nature Society. Aside from spreading awareness on the importance of keeping our oceans clean to schoolkids, the event also marked the beginning of Google’s Street View mapping of Tioman – on an All-Terrain Vehicle (ATV).

We also got to sit down with Street View Operations Manager Nhazlisham Hamdan (Naz) and Google Malaysia’s Communication and Public Affairs Manager Zeffri Yusof to talk about their experience mapping out Malaysia, Thailand, and Indonesia. Zeffri on the left, Naz on the right. ATV behind.

We started out with some general questions followed by some questions comparing the three countries. Let’s start off with the answer to the question most of ugaiz are wondering…

* Note: These views are not representative of Google and are based on Naz’s observations. The only views offered by Google in this article is Street… View. In a very simple nutshell, the main star of the show here is that weird ball thing that you’ll see on any Street View vehicle. It houses 15 cameras that snaps two pictures a second while a housing box stores the pictures as a record of the location, speed, and direction of each picture. The pictures are later “stitched” together using Google’s software – which also blurs out faces and car plates.

This rather portable 18kg setup enables the team to attach it to whatever will best fit the Malaysian terrain, which includes the familiar Street View car, backpack, ATV (which was custom-assembled in Sg. Buloh BTW), and kayak (Zeffri tells us this is the first time a kayak has been used… you can read the story here). Street View car on the left, Backpack Trekker on the right.

The kayak was a zero-emissions solution used to map out 2,000km Malaysian coastline, but at the time of writing has yet to make its way to Street View. When it does though, we expect it to make…waves.

Or at least more than the Street View camel used to map a desert. But with so many of us not being familiar with the technology, the good thing is that…

Driving around snapping pictures generally means that Street View will end up inadvertently snapping unintended events, such as people falling or even murder investigations. However, there’re also those who try to get snapped doing strange things on purpose.

So apparently, Street View Trolling is a thing that’s been catching on in several countries, with people planking (remember that?), flashing (Google that urself), and playing dressup for the camera – like these pigeon people in Japan: Because, Japan. Click to view the actual thing (and explore Japan!)

Google themselves are also partially responsible for this, such as when they announced that Wally (or Waldo if you wanna be all Yankee about it) was hidden somewhere in UK Street View and challenged online users to find him: 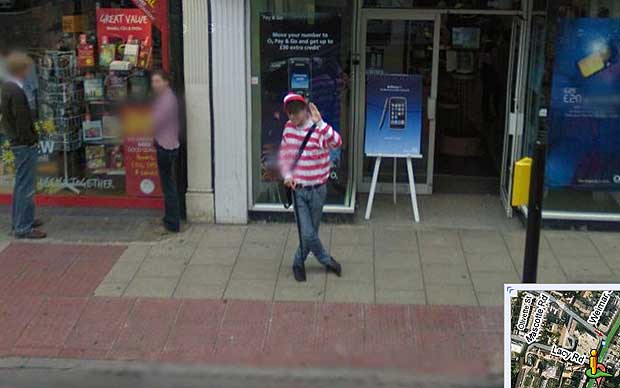 I FOUND WALLY! Image from The Telegraph.

When we asked Naz what was the weirdest thing he’d seen someone from Malaysia, Thailand, or Indonesia do, his response was:

He did elaborate on to say that people in South East Asia are pretty decent in their trolls, nothing beyond striking a pose or, at the most extreme, planking – “nothing that is culturally unacceptable”. In fact, most people just end up asking the driver/trekker what that they’re doing.

Alright, now let’s move over to what we like doing best: Comparing ourselves with our neighbors! And speaking of neighbors…

3.  There are guarded neighborhoods in Thailand and Indonesia too! 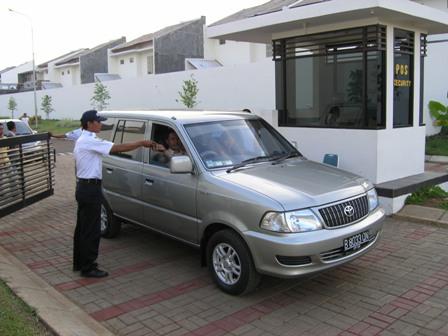 An Indonesian Jaga. Image from perumahantheaddresscibubur.blogspot.com

Okay, let’s clarify this here… we’re not talking about GATED communities, which are private residential areas with walls and guards; but GUARDED neighborhoods, which are public housing areas which have been closed off and guarded by the residents. This distinction is pretty big for Google since Street View is meant to only cover public areas (although there have been exceptions).

NAH, BACA:
Malaysia is the 9th most popular tourist destination in the world?! But there's a catch 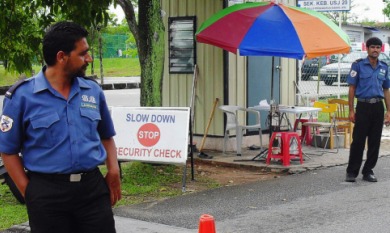 So how often do the cars get stopped?

While Naz says that they don’t technically need permission to map these areas, since they’re public roads and permission has already been obtained from the relevant local authorities, they do make it a point to explain what they’re doing to the guards and/or to a neighborhood representative. So what’s the best way to convince someone to allow them in?

“Easier for friends and family to find your house.” – Naz, in interview with CILISOS

As to which country has the strictest guards, well, Naz says it depends more on the area than the country – the more VIPs, the harder to get in. Speaking of VIPs…

4. We finally know which country has the nicest (and most expensive) houses

Before we answer that question, here are some of the areas known for having nice houses (according to online searches):

If you’re wondering why the houses macam biasa je, it’s because Street View can’t access private housing areas, so these are houses along public roads. If ugaiz know of any other areas with better houses, let us know and we’ll put it up. We tried, k?

So which country does Naz think has the nicest houses? Drumroll please…..

EACH COUNTRY HAS EQUALLY BEAUTIFUL HOUSES! Or in Naz’s words…

“I am Malaysian… If I see a traditional Indonesian house, I might love it more because I’m used to seeing Malaysian houses. Every country has their own house designs which are beautiful in their own right. It’s like if I have three kids and you ask me which one I love more… how to answer? Hahahah. – Naz, in interview with CILISOS

When we asked him which country has the most expensive houses, Naz says that it, again, depends more on the area rather than the country. However, he did point out that Jakarta, for example, has a more noticeable difference between bungalows and normal houses compared to KL (“Not so much”) and Bangkok (“Just a little”).

5. We finally know which country has the nicest roads (according to Naz)

Actually, before we make the big reveal, why don’t you try taking a guess?

Aight, voted? So the answer is…. PROPER drumroll please….

I give up… Image from Glogirly.com

Or at least Thailand has the nicest roads overall. Naz says that Malaysia has the nicest roads – especially the tolled highways – but some rural roads are especially poor. In Thailand, the difference is much less obvious, with city roads not being as good but rural roads not being as bad. We’ll leave it up to you to decide which parameter you’d wanna go with. In case you’re feeling bad that Malaysia doesn’t have the nicest roads, we do have better neighborhood planning in terms of residential areas, so hey… the ride may not be smooth all the way, but at least you’ll find the place easier.  😆

While this article focuses more on Google’s Street View than World Oceans Day (since that was the event we were invited for), we think that the beauty of our oceans should be observed and protected all 365 days of the year! One of the ways we think this can be achieved is through Google’s release of Street View…. for oceans!

While it’s still in the process of being mapped out, the release (also in conjunction with World Oceans Day) does cover certain parts of the ocean which can be used as possible educational material. You can view a humpback whale here:

Google has also expanded their reach to outer space, collaborating with NASA to turn satellite images of the moon and Mars into an explorable 3D terrain. It’s better using Google Earth for this though, so here’s the download link, but if you wanna stick to Google Maps, here are the instructions for your 30 Seconds to Mars.

In case you’re wonder, this isn’t a sponsored post. We’re in genuine admiration of this technology and how this accessibility can be used for educational purposes.

Really wan. It’s not because they sent us to Tioman.