Did ugaiz know that Penang placed #10 on TIME Magazine’s recent ranking of the “selfiest” cities in the world? Though we didn’t know that “selfiest” was an actual word till we read the article (really now?), we can clearly tell you that most, if not all of those selfies, were taken in the island, or also known as Georgetown.

But what about her lesser known sibling, Butterworth a.k.a. Mainland Penang & the gang? She needs some loving as well lah, because we’re pretty sure some just went:

“What’s a Butterworth and how does it taste?” Aik, which one Georgwetown ley?? LOL if I couldn’t see Komtar, I would’ve been confused as well! (Photo credit: Thomas Won)

Now, I know there’s a lot of stigma regarding this topic – made famous by snobbish Islanders who “don’t even consider it Penang”, but no need to be so dramatic ley; she’s lowkey stylo and you better believe it. There are so many hidden secrets about Georgetown’s not-so-famous sister, and CILISOS is going to help unearth that.

Penang is steadily evolving into the number one weekend lepak destination for us Malaysians (ang mohs and international tourists as well) and it’s actually relishing it’s position there; going from strength to strength and winning award after award. The thing most people don’t seem to realise is that Butterworth is actually as involved in that winning formula.

How so? Here are 6 reasons why mainland Penang isn’t the state’s ugly stepsister:

1. The bright lights of Auto-City will compel you.

Imagine a slice of New York’s Times Square, the bright lights, giant billboards, happening nightlife with bustling bars and pubs with all the glitz & glamour cherry topping. Yup. So you’ll get all that, but just smack in the middle of relatively nowhere. You thought I was overselling with the Times Square reference kan? Well, ta-dah. (Photo credit: projectpenang.my)

“Juru? Oh you mean that toll stop the bus driver notifies you when you’re almost arriving in Penang?”

This was born of someone’s bright idea to turn a plot of land into a congregation of car dealerships (luxury car brands and continental car showrooms – hence Auto-City – and it turned out to be a stroke of genius! Yup, that link says 60,000 people. We checked the zeros twice.

The area is flashy, upscale, has the best nightspots (some rivalling even the ones on the island), swanky restaurants/eateries; all of which is the total opposite of the unfairly painted “hulu place” tag. 2. They have the best seafood! Even we Islanders take the drive up there to eat.

This is probably one of the biggest secrets and something we might actually not want to share with outsiders, so shhh. Bukit Tambun! The secret is Bukit Tambun! (Shh, who said that!)

You see Tambun is actually a fishing village, that’s why no one in the state or neighbouring states for that matter (Kedahans regularly come by to eat as well), can match the freshness, taste or prices. There is no specific restaurant that’s got the crown but the majority of the ones concentrated in Tambun are A+ Proton tayar rated (that’s our local version of the Michelin-stars leh!). Seafood is without a doubt the best here and for a 5-person meal of the same dishes, you could easily save RM80-RM100 here in comparison with Georgetown.

Islanders usually drive down for a nice big meal with the family on weekends ’cause it’s relaxing, the food is crazy good, there is no haggling and the prices are never “touristy”. This island-based writer does it as well. (There’s this crab claypot rice dish at this one place, fuhh meleleh I tell you!) Some of the famous ones are Gee Seng Seafood Restaurant, The Fish Village Restaurant, Prawn Village Restaurant, and the Cheang Kee Restaurants.

Most of these guys have a fish farm built-in so it’s from the river straight into your belly! Wee! What a normal session looks like, yep. Oh yea, there’s a particularly hillarious line from the blog where this photo (credit: sixthseal.com)

“The bill came out to a grand total of RM 253.20 for the six (6) of us. We thought there was an accounting error on the restaurant’s part and made plans for a quick exit strategy since a dinner like that has gotta cost around RM 400.

However, upon further inspection, it seems that we were billed for everything we ordered after all. Tambun seafood is dirt cheap and it’s fresh and delicious to boot!” – sixthseal.com‘s blog entry about his trip to Tambun. Click to read more!

3. Its natural, earthy beauty is so raw and untouched. Oh nothing much, just the usual morning in one of our beautiful Mainland Recreational Forests. (Photo credit: Wakx)

So what do you do when you’re tired of the hustle and bustle of the city life? Come on down here, and get in touch with the Zen beauty nature has to offer.

NAH, BACA:
What are these weird grey lumps that washed up on Penang's beach?

The Mainland plays its “Yang” role perfectly in it’s “Yin & Yang” dynamic with Georgetown, offering a welcome calm and tranquil escape from all the honking and madcap Penang drivers. Haha, no really there’s actually a saying that if you can drive well in Georgetown, you can drive well anywhere. It’s pretty nuts.

Don’t forget about the breathtaking experience in the Krian Rivers; this firefly-watching place after an hour long boat ride in Nibong Tebal, has ethereal sights straight out of a romance novel. Just make sure you’ve got your life-jacket on when getting down on your knees to propose! Don’t worry, can kaotim the boatman tolong take photo for your Instagram. Stock up on the mosquito repellant though, don’t forget. Our hospitals need the blood more than these pests. (Photo credit: vincevilla.com)

4. Its old-time wanderlust vibe will transport you to the 80s.

In this ever-evolving modern age that we’re living, there’s no wonder why people seek out the wonders of the past. And that, my friend, is what you’ll see in Butterworth’s ferries and railway lines.

The Ferry is very, very old, but it’s still there because it works extremely well. There’s equal amounts of nostalgia and modern efficiency involved. Every morning, it’s packed with the daily commuters to-and-from the island, and it’s a nice quiet moment for them to stand by the railings with the nice cool morning breeze hitting their faces & basking in that majestic glow of sunrise. Memang layan. How the upper floor looks, whereas the lower floors are for the motorists. (Photo credit: My Little Eye)

The railway lines are scenic and give a nice retro feel to your trip, considering bunk berths are always sold out, book early for an unforgettable trip back to the Malaya of old. Plus the recent announcement that the high speed train from Penang-KL will soon be operational is also going to draw a lot of welcome attention since you’ve now got a new travelling option besides the usual flights & busses. No more getting cooped up in your little seat, travelling has gotta be a “feel” thing. This one more feel mah! (Photo credit: Les Gregory)

5. It has some of the most beautiful temples and churches in Malaysia.

Both the Tow Boo Kong Temple and the Nine Emperor Gods Temple look like they’re sets for an epic oriental movie, every review on travel sites by foriegners just in shock and awe at it’s beauty & heritage. Every year, the Nine Emperor Gods Festival is held for nine days, from the first day to the ninth day of the 9th lunar month & that’s when you get to see them both in all their glorious splendour. Stalls are set up to sell vegetarian food, vegetarian cake & other nice makan-makans (We Penang kia, everything oso must have good food ley. No good food, event fail liao!).

An opera show will also be performed as a mark of respect to the Gods and the other colourfully spectacular events such as Spear Skewing Ceremony, Making of the Herbal Medicine and the Fire-Walking Ceremony. I can already hear the angelic chorus ringing in my ears or an Assasin’s Creed scene playing out in my head! (Photo credit: Clarkson Lee)

Also the St Anne’s Church is one of the biggest churches in the country and is famous for the annual St Anne’s Novenna & Feast, which I’ve personally been to many times myself and it’s safe to say the scale rivals that of South American and Iberian church festivals – jam packed with devotees, lights, colours and sounds.

Every year the festival brings a carnival-like atmosphere to the town of Bukit Mertajam and the church compound is filled with the shimmer of candle-lights held by the thousands of devotees. Regularly drawing around 100,000 devotees each time. The 10-day feast has a planned theme and events organised by the church’s committee, including makan-makan, chariots/floats processions, and performances such as choirs and plays. 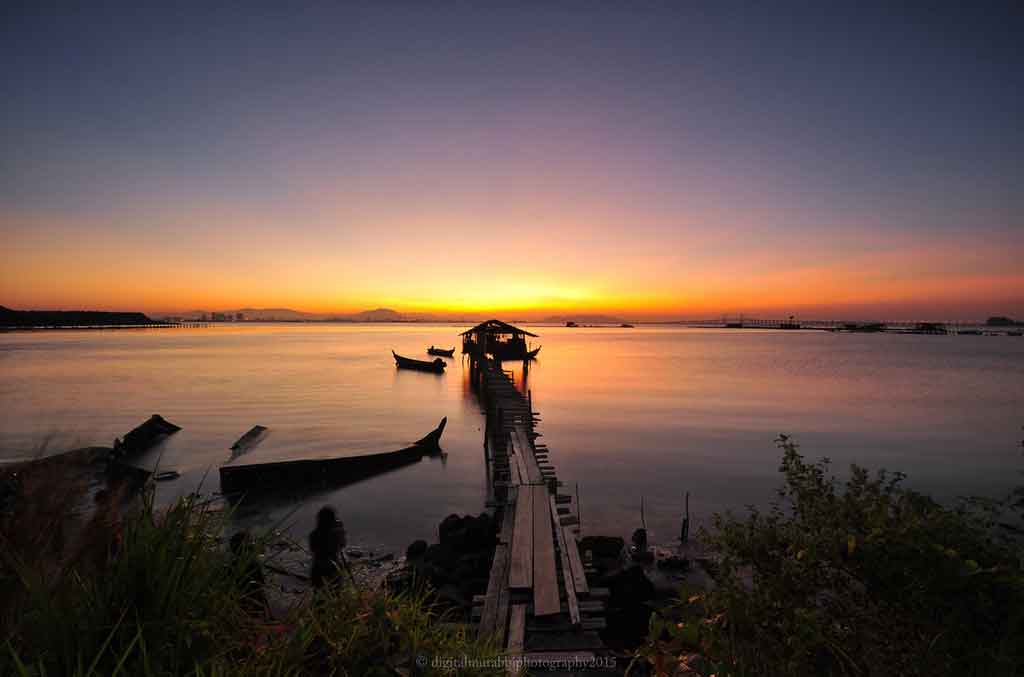 A friend described it best when she said a chill roadtrip to the mainland, driving by the fishing villages, the kampungs and the railway lines was like being transported back in time. Your very own DeLorean adventure back at 88mph!

She was spoiled for choice as to which shots to choose for her insta page. Hand crafted fishing equipment, classic wet-markets, kopitiams, colonial era shophouses/architecture, the whole shebang. It’s a relaxing retro vibe which is a nice offset to the hustle and bustle of the neighbouring elder brother Island, and a few additional photos that you can’t possibly miss out on including in your “Epic Penang Road Trip *kissy emoji* *sunshine emoji* *island emoji*” album.

Hah, see! That was a fun ride now wasn’t it? So what’ve we learned today class? ‘Butterworth’ is not something you spread on toast and neither is the Mainland area some sorta faux pas area on your travels down to Penang. No but seriously, consider putting this whole big part of Penang into your plans, your fellow travellers, family members or friends will be all the more culturally richer for it. It’s not always about the food you know.

Walau, this is Penang lah, it’s always about the food. Happy travels!