By now, you may already know that the annual haze-a-thon that chokes our region is largely due to the palm oil deforestation in various parts of Indonesia. There have been endless calls for Malaysian and Singaporean intervention. There is international pressure. There have been discussions. But recently, it was announced that Malaysia and Indonesia are joining forces to stop the passing of a regulation in the European Union (EU). What could be so dangerous that TWO countries have to team up and travel half way across the world? What are the cunning ang mohs up to?

While this all sounds a bit like a loose local superhero movie plot, they’re actually going to save our palm oil industry from potential disaster. But Indonesia’s the one that’s burning palm oil estates and causing the haze every year. So why are we teaming up with the country that annually blows smoke in our eyes?

On April 4th, a bunch of politicians in the European Parliament (yea, the EU has a parliament) decided that they should check their imported palm oil more carefully. They proposed a Single Certificate scheme that will evaluate imported palm oil. This, made Malaysia and Indonesia very angry.

Why? Because both of us are two of the world’s LARGEST producers of palm oil, accounting for 85% of the global production. Plus, since we ARE the largest palm oil producers, wouldn’t it make more sense if WE do our own checking and regulating? But SO WHAT if the EU decides to reject the palm we produce?

Well, the EU is our second biggest buyer of palm oil. That’s 2.06 million tonnes last year, compared to 2.8 million tonnes we send to India. In terms of value, we export about RM10bil worth of palm oil and palm oil products to the EU. So even if they reject like, 10% of it, it’ll still be a headache. There’s also the concern of Malaysia’s palm oil image. The countries in the EU, like Germany and Netherlands are very atas and well respected. So you could roughly imagine how bad it would reflect on our palm oils if it were rejected by THE EU.

Currently, palm oil certification is done by the RSPO, which was formed in 2004. It consists of companies and brands that pledge to support sustainable palm oil. But to the EU, the current certification is “open to criticism and confusing for consumers“, so they want to make their own one. And there HAS been criticism in RSPO’s standards, about not being strict enough with deforestation standards and accusations of corruption. To better understand the situation, we asked Andrew Ng and Siew Lim, who both served the RSPO, but are now working independently through Grassroots.

“The RSPO has some serious problems, including a credibility gap between what is professes vs. what is really happening.” – Andrew Ng tells Cilisos

“The major weaknesses lie in its implementation on the ground and the lack of enforcement of its own rules (especially when things go wrong). There also needs to be clear consequences for members violating the standards. I don’t see this happening well at the moment.” – Siew Lim tells Cilisos

But the major problem is coming from… underground??? Sh*t’s on fire yo. Image from channelnewsasia.com

So why would they reject our palms? Is there something wrong with our oil? The problems lies with its environmental impact.

Vast spaces are needed for large scale plantations, and that would mean clearing lots and lots of forests. From different sources we looked, Malaysia and Indonesia consistently ranked top 10 in countries with most rapid deforestation rates. But then again, it might not be palm oil’s fault, and it just be because we have more trees than anyone else right? Unfortunately, no. According to this study in 2014 that investigates carbon emission linked to deforestation, palm oil wasn’t the main contributor! It’s actually timber! Produced by… Malaysia… So we can be happy for the palm oil part… we guess???

The main problem is actually our soil, because both our countries are covered in mainly peatlands. The soil in peatlands are more fertile, because it’s made up of moist organic materials (like dead leaves), and holds up to 28 times more carbon than your average… dirt.

Burning of peatlands releases huge amounts of carbon, and results in a deadly haze *stares at Indonesia*. Also, the fiery peats are very hard to put out, as they can burn from underneath instead of burning from above the ground. And the problem doesn’t go away just because we don’t burn it, or even if we try to pour gallons of water on it.

Peatlands are usually drained because planting is difficult when the ground is too soggy. But drained peatlands can still emit carbon because it naturally decompose! Once that happens, it will not only become infertile, but it also becomes easier to burn due to its dryness. But that’s not just the problem…

Not to downplay the importance of preserving biodiversity, but the rights of laborers and workers should draw equal attention with animals as well.

Malaysian palm oil is listed on the “United States Labor Department’s List of Goods Produced by Child or Forced Labor“. Numerous reports and investigations of child labor in Malaysian plantations have surfaced over the years. Findings say its normal for children to be working while receiving little or no pay. The situation might be more serious in East Malaysia, where there’s estimated to be 60,000 children with no documents in Sabah alone.

Hey kid where are you from?

When asked by The Guardian about this, the Malaysian Palm Oil Board did not respond to them. The gomen has recently pledged RM5mil into investigation of the situation, and seek to remove ourselves from that list. Plantation Industries and Commodities Minister, Datuk Seri Mah Siew Keong defended Malaysia by saying it’s normal for children to tag along, and denied that this is an issue in Malaysia. But… the minister might just be right.

“Children in estates working alongside their parents is a common occurrence in Indonesia.” – Andrew

“My recent work has led me to do social assessments on workers’ rights in palm oil estates (owned by major companies) in Malaysia. I don’t think labor violations are widespread but there ARE isolated incidents.” – Siew Lim

But actually, is it fair for palm oil to get this much flak?

“Oil palm cultivation makes up only 5.5 per cent of the 260 million hectares of agricultural land used to grow edible oils around the world. Why does Europe not pass a ruling on other edible oils?” – Kelvin Tio, Managing Director of Indonesian palm oil company

This checks out with these statistics we found as well. While we don’t know if Kelvin’s claim is completely true, soy (which is the main competitor of palm oil) clears 480,000 hectares of forest yearly, as compared to the 270,000 hectares by palm oil.

In fact, vegetable oils aren’t even the main reason of botak-ing forests, that remains to be cattle farming, with destroys up to 2.71 million hectares of land yearly. But the problem was with our peatlands right?

Turns out, palm oil peatlands are the 2nd largest contributor of carbon emission in agriculture, first being the beef industry. But here’s the twist, palm oil is the most resource efficient to grow! Meaning it gives us more product compared to what we give it to grow. Compared to soy, palm oil can give 10 times the yield per hectare, making palm oil a very competitive product.

“Palm is one of the most productive crops on the planet, with the ability to grow in a remarkable range of places.” – Alan Townsend, Dean of the Nicholas School of the Environment at Duke University in an interview with ensia.com

So it’s possible to grow them elsewhere aside on peatlands, plus it also requires lowest pesticides and fertilisers in absolute terms.

Small-time farmers may have the biggest role to play

One aspect that is seldom addressed by the nay-sayers are the small time farmers. Smallholder farms are run by individual farmers that are planting on a small scale. While it’s good that the industry is providing them a way out of poverty, they might be the ones contributing most to the problem. According to the RSPO, these small farms together account for 40% of the global palm oil output. While it’s easier for gomens to regulate and coordinate large companies, it’s more difficult to implement standards to scattered individual farmers living deep in the plantations. As they have less access to the resources and technology that is available, they still rely on traditional techniques that might be against sustainable practices, a good example would be the practice of “slash and burn“.

According to previous study mentioned, unregulated smallholders is a recognised trend across the agricultural industry that’s harming the environment.

“From having been caused mainly by smallholders and production for local markets, an increasing share of deforestation today is driven by large-scale agricultural production for international markets,” – Martin Persson, co-author of the research 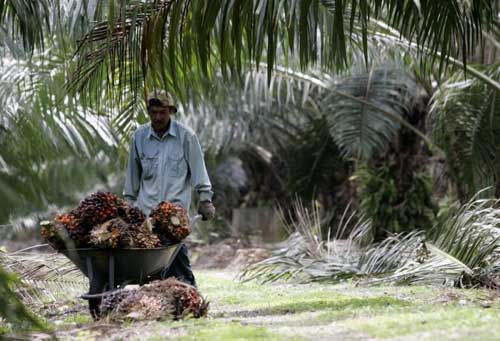 The demand for palm oil will likely continue to grow, as it is used widely in food products (such as Nutella), detergent, cosmetics and even as biofuels. In Malaysia, it’s a growing industry that employs and supports at least 600,000 people, and contributes 5-6% to our GDP, and it’s our fourth largest industry.

While we don’t know if EU’s actions is a personal attack on Malaysia’s palm oil industry (as claimed by MPOC CEO), our palm oil industry evidently has a huge negative environmental impact. But that can be corrected with enough control and enforcement. According to the MPOC, we have more than 15 laws and regulations aimed at keeping palm oil sustainable.

Malaysian agencies such as Malaysian Palm Oil Board, and Malaysian Palm Oil Council will continue to push for the expansion of sustainable palm oil and expand the industry, because we have been pushing for our own certification too! By end of the year, we’re hope to be sending Malaysian Sustainable Oil Palm (MSPO) to Europe. However, Andrew and Siew Lim have their doubts about the MSPO.

“We were also involved in a comparative study of RSPO and MSPO recently. I can say that if RSPO can’t get it right, MSPO has even less chances of getting it right.” – Siew Lim

“The MSPO in contrast is a far inferior standard. It lacks many of the safeguards for credibility RSPO has. NGOs are not welcomed and able to participate in governance, nor do the MSPO reflect the concerns or values of stakeholders, not even local ones.” – Andrew

So we’ll just have to wait and see what our combined forces with Indonesia can achieve in the Europe. To be fair, Malaysia has actually had a good track record, as we were the largest RSPO certified producers for awhile, so here’s hoping things work out for our dynamic duo.