So what did you do during the lulls in between CNY feasts, angpow-hunting excursions, marathon gambling sessions and fireworks?

If you had browsed through YouTube, you would have seen plenty of CNY videos by corporations. Good or bad, these vids usually get hundreds of thousands of views.

Then there are the videos by smaller companies or individuals. A lot of these are home-made, whip-out-your-handphone, by-the-way-let’s-film-this vids of CNY festivities at home, in the office or on the streets. Most of them don’t get that many views.

And then there are those rare CNY videos made by Malaysians that are really fascinating, even though they have really, really low view counts. Some are funny, some are cute, and some showcase incredible talent. And we think some of them really deserve to be have way more views lor.

So we trawled YouTube and compiled 8 Malaysian CNY vids that we think need way more internet love. All of them (except one) got less than 1,000 views. But all of them are si beh fascinating lor.

Here they are in no particular order. Enjoy!

This guy is so…AWESOME!!!! What’s fascinating about this vid is not just the fact that it’s a Malay dude playing a CNY song. But the fact that he’s given it a jazz-funk vibe, channelling the Gods of Funk from the 80’s and 90’s like Chick Corea, Tico Torres, Joe Satriani, et al.

This dude even arranged, mixed, and mastered the song, played all FIVE instruments in the performance, AND shot and edited the video all by himself.

You have got to check it out – it’s absolutely kickass! Malaysia kaw kaw boleh!

2. The most EPIC Yee Sang toss

This video starts off innocently enough, looking like some lame handphone vid of a company function.

10 seconds later, it suddenly becomes a case of, “Holy shit, what just happened?!” Luckily, we managed to catch this video – the most epic yee sang toss ever.

P.S.: If that was the boss in the video…

Well, what she actually ate was the halal version of bak kwa – made from chicken!

The video starts off with some snippets of interviews, showing some Malays feeling geli or disgusted when asked if they wanted to try bak kwa. But then it goes on to feature celebrity chef Sherson Lian showing how easy it is to make the halal version of this delicacy right in your own kitchen.

Which is pretty cool cos now everyone can enjoy the Chinese equivalent of one of nature’s most awesome food group – bacon! Festive season, awesome snack, hot celeb chef, easy recipe, Malaysia’s favourite topic (food) – what’s not to love about this video?!

There’s more from where that bak kwa vid came from, tho… Check out other CNY recipes from this hensem chef: 4. Many, many kids with many, many ukuleles

Could a more adorable combination exist?? Although we wish this video was longer – with an actual CNY song performance – we’re happy to settle for watching this bunch of kids strumming a few bars and calling out Chinese New Year greetings. So cute!

But what we found fascinating was that this video was made by Persatuan Pencinta Muzik Ukulele Malaysia –PPMUM (Malaysian Association of Love for Ukulele Music). Wah…ukulele music so big in Malaysia until can form association ah?

At 809 views at time of writing, we def feel like this video could get more play time. WeChat chronicles the funny misadventures of a guy desperately trying to tell something to several leng luis, an aunty and even one ma lat loh – and failing spectacularly. Every time he opens his mouth, he only gets as far as, “Actually, I…” before he gets cut off with some pretty hilarious brush-offs.

The first girl cuts him off by saying she has a boyfriend and makes a quick exit after foisting the dinner bill on him. The second girl threatens to call the cops. The third girl tells him to forget it because they are from two different worlds. Our favourite is the aunty, who can’t believe that he would go after even an elderly lady!

Of course, he finally gets to finish what he wanted to say using WeChat – which is to wish everyone Gong Xi Fa Cai!

Remember the ultra-funny Oppa Cai Shen Dao parody? Well, it’s been made into a video game.

OK la, the game itself looks pretty lame with its 8-bit music and graphics (especially compared to the awesome original parody). But, we think it’s quite fascinating that someone actually tried to make a game that works! Unfortunately, it turned out more funny to watch than actually fun to play.

This is just one in a series of 5 videos about interesting CNY facts produced by AIA. But none of the videos got more than a couple of hundred views. Which is surprising because a huge company like AIA should have plenty of reach. 🙁 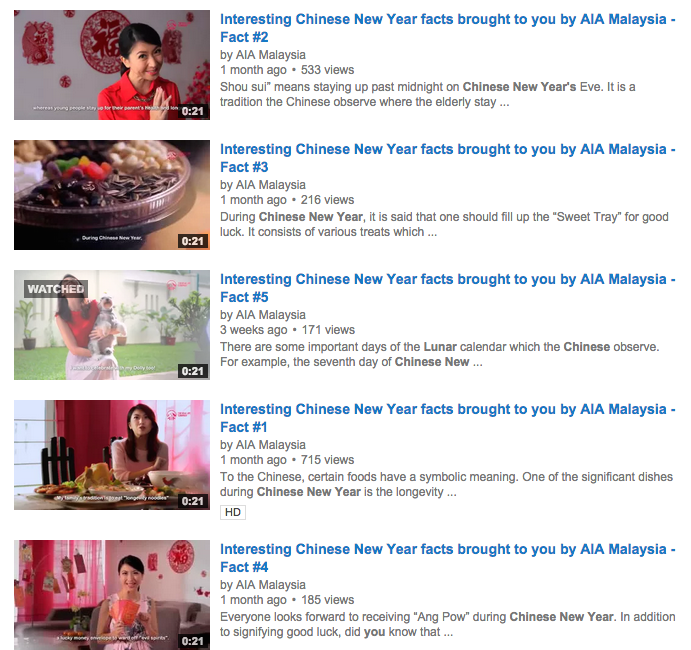 8. CNY greetings in the sand

Sand art is a pretty fascinating performance art and not many people in Malaysia can do it. It takes a whole lot of control and precision planning, not to mention it’s an incredibly messy form of art. I mean… It’s sand, for goodness sake.

So we think this video is really special. And we definitely think it deserves so much more love!

P/S: We highlighted some unique Malaysian artwork including sand art… Check it out here!

If you’re non-Chinese (or banana like us) you probably missed this CNY video by RED People, even though it’s gotten over 400k views since January. It’s a really cute CNY song, sung by REALLY cute Malaysian performers. And the lyrics are slightly wacky, giving the stereotypical CNY lyrics a very young and fun vibe.

The “7 Hole Strong” title translates into “Chi Dong Chiang” in Mandarin, which is the noise lion dance musicians make. And in one part of the song, the singers wish you “10,000 likes” – probably because they are all internet personalities.

But hold up, RED who? According to Wiki, “RED People is a Malaysian online supergroup founded by controversial rapper-songwriter Namewee. It was established with the aim of integrating the forces of Malaysian online personalities, and prepare them for mainstream media.”

Ah… it’s a Namewee production – now we understand why the lyrics are kinda… interesting. 🙂

So, there’s our list. Do you know of any Malaysian CNY Youtube vids that need more love? Let us know in the comments below!