Most Malaysians might know Ramadan or Bulan puasa as a month-long gorgefest of local buka puasa delicacies at one of the many Ramadan bazaars (Pasar Ramadan), and perhaps as the time where ads become suitably cheesy in a 1Malaysia sorta way:

Considering that there are 2.04 billion Muslims worldwide, we can’t help but wonder how Ramadan is celebrated elsewhere with the influence of local culture as well as contemporary issues such as politics and urban development.

BTW: We are doing a concurrent article on the not-so-beautiful things inspired by Ramadan in Malaysia and other countries and one about the beautiful things which you can read about here…

If you’ve been directed here from our sister article, we’re using the same introduction so you can skip this and head straight to the list below.

While sadaqah, or the voluntary giving of charity without guidelines or obligation is something that Muslims do their best to practice in their daily lives, it’s especially observed during Ramadan. Therefore we can’t help but feel a tad bit disappointed when Federal Territories minister Datuk Seri Tengku Adnan Tengku Mansor announced that fines will be imposed on those who give alms to beggars. Yes you read that right. You can get fined for your kindness. Sure, many beggars may be inauthentic or victims of syndicates but should we be focusing on penalizing those who try to help rather than the actual culprits behind the problem?

Oh well, at least people who still want to help regardless can still do so at a soup kitchen.

Soup kitchens have been ordered to move out by July 7th 2014. Just putting this here. Y’know, cause we like the artwork. (Image credit: islamic-quotes.com)

The previous year’s Ramadan dampener was the Bak Kut Teh incident where sex bloggers Alvin Tan and Vivian Lee posted a photo of themselves having bak kut teh (a pork-based dish) with the caption “Selamat berbuka puasa dengan bak kut teh…wangi, enak menyelerakan!” (Happy breaking fast with bak kut teh….aromatic, tasty and appetizing) and a Halal stamp underneath. On the bright side, the couple have apparently split so we can look forward to not having any more porking (heh) hijinks from those two.

There has and always will be a debate on whether or not fasting for Ramadan should be policed by law or left up to the intention and faith of the believer in countries where laws are enacted to for this purpose.

In Indonesia, the Bogor branch of the Islamic Defender’s Front (FPI) – a hardline fundamentalist group – has announced its intention to police and conduct raids on venues for activities that were “a disturbance to Muslims” over the course of Ramadan. This isn’t the first time they’ve conducted such raids too, with an FPI member sentenced to prison for manslaughter when he struck and killed a woman with a motorcycle while fleeing armed residents after a similar raid in 2013.

Despite assurances from the police, some local businesses remain skeptical:

“There are probably no more than ten policemen standing guard in Kemang at any given moment… The FPI can amass 100 people in one go.” – Local restaurant owner interviewed by the Jakarta Globe

From a report of their previous activities this probably isn’t an exaggeration. 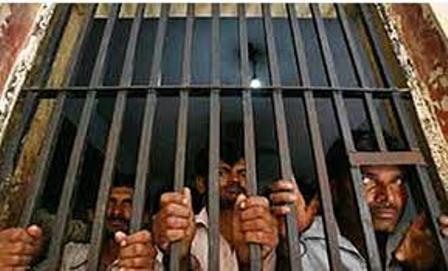 19 Muslim prisoners in Mumbai have been denied Ramadan meals this year (2014). They have been in prison since 2008 while awaiting trial for allegedly belonging to a terrorist group called Indian Mujahedin (IM).

While they have been previously granted the rights to home-cooked meals following Suhoor and Iftar timings on the basis that regular prison mealtime schedules aren’t fasting-friendly, a new judge has refused them those rights this year. This is in contrast to two other such cases in the same prison where the defendants were allowed homemade meals.

The Islamic organization Jamiat Ulema-e-Hind initially took up the case to overturn this ruling in the High Court, but later decided that this may not have been a good idea as losing the case would cause all the prisoners involved to lose their access to homemade meals. The 19 would now have to share meals with the prisoners who were in the two successful cases.

Happening at the time of writing (July 3rd 2014), a cafe in Tripoli was bombed for reportedly being open during Ramadan. While officials have yet to conclusively determine if this was the reason for the attack, what’s known is that two unidentified men on a motorcycle threw a grenade into the shop, wounding four people and causing substantial damage to the shop. Click on the image to watch the event in real 3D

This attack follows a series of warnings in text messages and social media posts to F&B establishments to  not open during fasting hours. While there is no law prohibiting people from eating during Ramadan, many are asked to be respectful of those who are fasting.

NAH, BACA:
How easy is it to buy a gun in Malaysia? We tried to buy one!

The Makiya cafe is known to remain open during Ramadan to cater to non-Muslims as well as those unable to fast due to chronic diseases who are otherwise unable to buy food.

Muslims make up  about 1-2% (Edit: A reader brought this up in the comments below, and after some consideration and research we’re inclined to agree. Thanks Passerby!) of China’s population, with many of them in the Xinjiang region. The Xinjiang region is also home to the Uighur (or Uyghur) people, a Muslim ethnic group. There have been many clashes between the Uighurs and the Chinese government in the past, but things culminated in the 2009 Ürümqi riots. You can get an idea of the background story here. There’s something wrong with this image. Can you see it? (Image credit: qz.com)

This year (2014), the Chinese government has enforced a ban on Ramadan fasting in the Xinjiang region citing student and government workers’ wellbeing and preventing the use of government buildings (including schools) to promote religion. While this has happened before, it has been noted that this year’s ban has been stricter and more widespread than in recent years.

Government websites have been posting photos of local Muslims eating during the day, having local government officials bring gifts of food to local village leaders during the day to ensure they’re eating, and getting schools to ensure that students do not enter mosques during Ramadan. Now why does that sound so familiar….? (Picture linked to article)

Because you’re in our Shiok list as well, but not in a good way.

When we used the search term “Ramadan laws Middle East” during our research for this article, the results returned some pretty interesting…well, results: The news is that US soldiers in Bahrain and some other Middle East countries have to submit to Sharia law during the Ramadan month. Although US military bases are considered US soil, this point hasn’t deterred President Obama from imposing compulsory dawahs (preaching) by Islamic cultural advisors to troops and to order adherence to fasting times (No eating, drinking, or smoking) regardless of personal faith. Bibles have also been removed from bases as a gesture of respect. These decisions bring into question Obama’s secret allegiances to the Islamic Agenda, the New World Order, and/or the Zionist conspiracy (Note: Two of these don’t mix very well).

Now if you noticed, we didn’t put any reference links in the paragraph above because…well, because it’s false. A quick check at the myth debunking site Snopes (EDITOR’s NOTE: More uncles and aunties should visit this site before forwarding me emails) reveals that this story is a greatly exaggerated version of actual military policies. For instance, US troops have been advised to dress more conservatively in respect of those observing Ramadan. These soldiers were not subjected to dawah, but were only briefed by an military cultural advisor on the religious beliefs, customs, and traditions of Ramadan as part of standard practices for US personnel overseas. Also, they have been reminded to not eat, drink, or smoke in public because that’s something that’s punishable offense in some countries.

Saudi Arabia is known for having some of the strictest Islamic laws, even compared to other Middle East countries. While some countries such as the UAE have equally stiff laws, there is a certain degree of leniency given to non-Muslims who may be unaware of such laws.

Saudi Arabian authorities however do not share the same sentiments as they have threatened to sack and/or deport non-Muslim foreigners caught eating, drinking, or smoking in public. The statement further adds that that being a non-Muslim is “no excuse” and “…anyone living in [the] country should follow the laws of the Kingdom, including respecting religious sentiments”. Local citizens on the other hand are subject to corporal punishment. Now for some insightful parting words:

Ramadan is the month in which Muslims believe the Quran was descended from God to the Prophet Muhammad and is one of the required Five Pillars of Islam that make up the foundation of Muslim life. While we usually associate puasa with abstinence from food and drink, it goes far beyond that; extending to abstinence from false speech and procrastination.

This is best summed up by Imam Sohaib Sultan:

Fasting proves to us that we are, indeed, masters over our own passions and that we can reach for greater heights beyond our lower desires. The Prophet Muhammad taught his followers that God has no need for a person to fast from food and drink if they don’t fast from false speech and other greater sins.

Imam Sohaib is currently contributing a self-reflective article a day on time.com over the Ramadan period. We recommend that you check it out regardless of your religious affiliations.

Sun Smiling For you

Trees Dancing for you

Birds singing for you

Because I requested them All to wish You