Malaysian artist Red Hong Yi strikes again! After making news with her incredible Jackie Chan chopsticks portrait last April, she has recently taken a very local twist by arranging 20,000 teabags into the image of an uncle making teh tarik with drink cans and an ice-shaving machine beside him. Commissioned to do a piece for the World Economic Forum, the artist from Sabah decided on the teh tarik concept reminiscent of local kopitiams and mamaks, where Malaysians like to borek-borek about “finding the best durians, the traffic, politics, weather and soccer”, reported The Star.

“It is a drink that brings people together and I hope that I am able to share a bit of my country’s culture through this piece.” – Red Hong Yi, The Star

We’d be lying if we said we weren’t mega proud of our Malaysian artist #tumpangglamor. She’s done so many uhhhmazing artwork which you can check out here on her Instagram account. In fact, we’re so proud of all our people in the creative scene that we’ve featured DeviantArt artists on CILISOS before.

Now we’d like to do a post on 8 other artists who, like Red Hong Yi with the teabag artwork, used some pretty unconventional things to design their masterpieces! We can only describe Lim Zhi Wei’s art as whimsical and romantic. Girly girls will LOVE!

Born in Sabah, based in Singapore, the artist who goes by Limzy uses flowers and other objects combined with watercolour illustrations to portray different subject matters such as animals, people and the occasional self-portrait.

“I wanted to make something specially close to her heart, something she will understand immediately. I thought a rose looks like a girl’s puffy dress. So I pressed some rose petals between books, and made her a bookmark with a girl wearing a rose dress. And she loves it!” – Limzy, Artistic Odyssey According to PitaPixel, Limzy doesn’t use flash photography because the most important elements in her illustrations are natural light so she often rushes home after work to make sure she can get her shot before sunset. As for what art means to her, she says:

“I believe art is not meant to be found only on walls or in high-end galleries.” – Limzy, The Instagram Blog

More of her illustrations on her blog and Instagram. Mulut Meriam. Image from The Star.

We warn you that Jamil Zakaria’s art is philosophically deep. All his creations are steeped in Malay proverbs, like the one pictured above; Mulut Meriam.

It’s a very curious piece isn’t it? Looks like a half a dude kneeling on the ground, but instead of his upper body, he has a cannon attached to wheels. There appear to be red cannon balls in the dude’s belly. But the very bizarre thing is iron-ball shackled to the wire dude’s ankle. Wonder what Jamil’s trying to say?

“Mulut Meriam is an idiom used to describe someone who lashes out at others with offensive and hurtful language,” Jamil explained in The Star’s article.

We told you. Deep.

“All of us have that nature (of lashing out with offensive language) within us and we have to control that nature. That is what the iron-ball shackle represents. We have to restrain it like prisoners are restrained.” – Jamil Zakaria, The Star Jamil posing with his steel wire art. Image from The Star.

His work involves a lot visualising and planning on paper first, before starting on the steel wires to create his installations. You can check out his CV here. Because throwing plastic bottles into the recycle bin is too mainstream, architect Lisa Foo and landscape designer Su Sim have repurposed them into gorgeous lamps instead.

Some of Lisa Foo and Su Sim’s plastic bottle lights.

But Lisa and Su Sim’s art are quite next-level. They’ve transcended the staticity of just ‘tengok saje’ art to dance and music. In collaboration with dancer-choreographer Aida Redza, they had produced a mixed media performance called River Meets Light. Driven by the sad state of our rivers, the performance was given to inspire the restoration of Malaysian rivers and preserving them for future generations.

Watch the performance below:

“In my creative experimentation with found objects, I am seeking that transformation of the unexpected into art and beyond.” – Lisa Foo, lfss-create.blogspot.com Artists can go nuts too when their kids refuse to sit still and eat their meals. So to train her daughters Elizabeth and Evana to eat independently, Samantha Lee started with her first food art in December 2008. A Hello Kitty meal. It worked though! Fussy eaters eat faster with visually appealing meals.

From then on Samantha researched artworks to see how she can make her meals more interesting. Then when she posted her creations on the Internet, she became a hit. This form of food preparation is called kyaraben. Insanely popular in Asia, especially Japan. According to Rocket News, a Twitter user named Clicohibi shared news that kyaraben is apparently not new. It’s been made and photographed 10 years ago.

“Personally, the more challenging food art is making cartoon characters compared with people’s faces because for characters, we have to try to make them look exactly like how they do in cartoons. Animals are generally easy.” – Samantha Lee, The Heat

So do you guys think someone start a restaurant selling meals like these in Malaysia? Anyway, check out more of Samantha’s creations here. 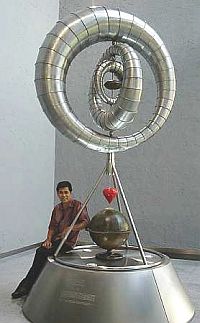 Lee Kian Seng posing with Millenium. Image from The Star.

What you see here is the Father of Installation Art’s original!

Lee Kian Seng started out with his first solo in 1966 at the age of 18. In the 70s, he was among the first few who experimented with Installation art. That’s how he became known as the Father of Installation Art Malaysia.

Millenium (pictured above) took Kian Seng 5 years (!) to complete. Standing at 4.5m tall and made of stainless steel and bronze, the artist was able to sign his sculpture at home on midnight, to mark the end of the millennium and celebrate the future.

Snippet of The Star article from leekiansiang.com.

According to him, the 3 tapering stainless steel spirals revolve independent of one another. The endless coil effect symbolise continuity, while in the centre, a bronze egg-shaped piece symbolises rebirth.

“I wanted to make something that was original and innovative, contemporary and yet relying on our creative impulses. Artists should always explore new possibilities, a kind of paradigm shift, if you like.” – Lee Kian Seng, The Star Leon Lim’s The Recycled Head looks like The Terminator after taking a beating, to us. According to his own site, the sculpture was made from damaged objects, plastic items, broken glasses, lamps and computer parts which he picked up from the streets of Georgetown, Penang in 1998.

But this Kedah artist has really come a long way and now he’s like femes yo! He was featured in the second season of Work of Art: The Next Great Artist, Top Chef, Project Runway, and The Real Housewives.

Leon is kinda unique. His start is not like any other. Since birth he has been deaf, which helped him to develop a strong sense of seeing. When he was younger, drawing took the place of speaking when he couldn’t find the words, reported Vimala Seneviratne in The New Sunday Times.

“Painting or drawing was something I loved doing. For me, art was never a means to escape. It was communication and a way of showing my skill.” – Leon Lim, The New Sunday Times 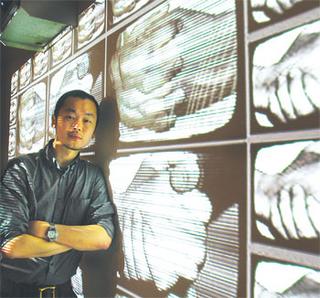 While most 14-year-olds taste freedom when they skip sekolah, Leon was literally living independently in Penang. Then he received a full scholarship from Rochester Institute of Technology in New York and he has settled there since.

Leon told The New Sunday Times that he is inspired by the works of Leonardo da Vinci, the Italian scientist, inventor and artist.

“He is more than just an excellent artist and what I like about his works is that they always engage the viewer. The viewer has the opportunity of grasping the artist’s thoughts, pose questions and find answers.” – Leon Lim, The New Sunday Times Hsulynn’s free hand painting with a teaspoon and coffee. Image from hsulynnpang Illustrations on Facebook.

Hsulynn Pang is a freelance illustrator who loves working on projects that involves creating, doodling and story telling. She once said:

Since making art with coffee, she has shared her talent with others through 2 projects. One is Astro’s Football Overload show – they challenged her to do a piece of her World Cup hero. She picked Brazil’s Neymar and painted him with coffee and crayon.

The second is a shareshop with Culturerun, where she taught 10 girls how to paint with coffee and teaspoons! But Hsulynn doesn’t just paint with coffee. Take a look at some of her awesome watercolours on her Facebook. Using only his hands as his tools, artist Bee Ghee Leng, better known as Loong Bee, creates amazing sand animation. Why do we say animation? Because his art is a series of images. See, what he does is shape a picture and then reshapes it to tell a story. Watch the video:

But Loong Bee isn’t even an artist by profession. Not strictly speaking. He’s actually a hairstylist. When sand animation was popularised by Ferenc Cako from Hungary, Ilana Yahav from Israel, Su Dabao from China and Chuang Ming Ta from Taiwan, Loong Bee felt like he had to try it.

“About half a year ago, I watched Su on television in a talk show. I was really impressed with this kind of performing art. The drawing process is synchronised with rhythm and music to tantalise our senses,” said Bee, who is a hairstylist by profession.” – Loong Bee, The Star So he picked up tips from sand animation websites and videos. After playing around with different types of grains, he discovered that natural sand worked best for him. It’s quite something to watch on screen as someone’s hands shifts sand around to tell a story.

Loong Bee has done live performances himself like the one for Courvoisier, which is kind of a personal favourite for us now. It depicted Napoleon Bonaparte’s 1811 visit to Bercy in 1811, Courvoisier cognac. Watch the animation here.

And the arts scene in Malaysia is growing like never before!

So as we mentioned in our DeviantArt post, we’re not saying that these featured artists are like the best of the best, the top of the top, the Da Vinci’s of….. you get the picture. We’re just saying, hey, we’re CILISOS and we love art, especially the ones created by Malaysian artists. Check out our other post on controversial art that made pissed people off.

But if you guys actually know of any other artists who have made spankin’ masterpieces with unconventional items – no rules, can be bubble wrap, ice-cream sticks, brillo pads, etc. – do share some links on the comments below.

There really is a budding arts scene in Malaysia compared to the days of Generation X youngsters who probably got their hands rapped with a ruler for doodling on their buku exersise… It’s all thanks to young professionals these day who recognise that art is a serious investment, stated The Malaysian Insider’s report. The Wall Street Journal reports that there’s been a rise in the number of auction houses in our country.

“How many Ferraris can you own before you start to look around for something more sophisticated and meaningful?” – Pakhruddin Sulaiman, Lawyer and art collector, The Wall Street Journal

If you are an artist yourself, you’ll find yourself in good company. There’s a lot of encouragement and showcase space to be had in these places. Or like the Art Malaysia group for example. CILISOS looks forward to its readers becoming femes!