Most of us would know Tun Dr Mahathir and Datuk Seri Anwar Ibrahim. Many of us would also know that Anwar was once Deputy Prime Minister to Tun M, but they had a huge argument and didn’t like each other anymore.

But that was history. This is today (we updated this part like 5 times adi). It started last year, prison authorities disallowed Tun M from visiting Anwar at the hospital, sending about 30 prison guards to the scene just to bar him. Like a celebrity crashing a birthday party, Tun M showed up at court to SUPPORT Anwar’s challenge of the new National Security Council Bill. Apparently the first time that the two had met each other in 18 years! Image from The Sun.

And this year, once Pakatan Harapan won GE14 and Tun Mahathir became our seventh prime minister, he had said that Anwar was going to get a royal pardon and he could be free to participate in politics… and as we write this, he had just been released from the Cheras Hospital!

But despite all that, the reunion between Tun M and Anwar is one that has shocked many, many, Malaysians. How many of us actually know the origins of their relationship? When did they first meet? What did they talk about? Where did it all go so wrong for them?

It’s a relationship that has been around for the past few decades, and so we thought we’d explore a brief history of the love-hate (probably more hate than love) relationship between Tun M and Anwar Ibrahim. And it all began when Anwar first joined UMNO.

When everyone thought Anwar was going to join PAS

To understand the relationship between Tun M and Anwar, one should also understand the context of their lives before they started working together. We’ll start with Anwar: 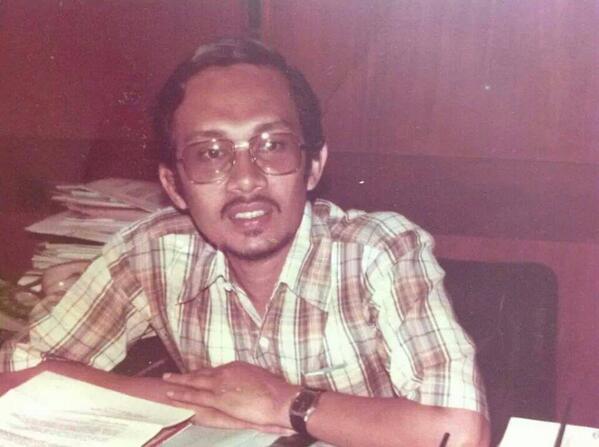 Yes that actually is Anwar Ibrahim. Image from his Twitter profile.

Unlike some politicians who spend their whole lives associated with one political party. Anwar Ibrahim didn’t actually start off as an UMNO guy. During his younger days, Anwar was actually famous not for being part of a political party, but an Islamic youth movement called Angkatan Belia Islam Malaysia (ABIM). Anwar was apparently a founding member, and the movement’s second President. And because it was a very Islamic-focused party, it also ended up being associated with PAS.

So that was Anwar Ibrahim during the 1960’s and 70’s: a figurehead for an Islamic movement in Malaysia.

Fast forward to 1982. Anwar shocked his supporters by announcing in a press conference that he was joining UMNO, the arch-nemesis of PAS, and apparently right in front of Tun M himself.

“I chose UMNO because it gives me the avenue to continue my battle, and I give my full support to the Prime Minister (Tun M), and the party that he is heading.” – Datuk Seri Anwar Ibrahim when he joined UMNO in 1982, as quoted by Utusan Malaysia, and translated by CILISOS

But that’s not what he told his pals at ABIM, instead he claimed that he wanted to cleanse UMNO from the inside.

Tun M, on the other hand, had only been President of UMNO for about a year. Unlike Anwar, Tun M was UMNO through and through, but his rise to the top wasn’t always smooth sailing. He had been kicked out of UMNO by a former PM before, but his passion saw him being brought back by another former PM. Now he was PM himself, and in the midst of forming his cabinet, leaders that he could trust, and lead the country alongside. An undated but pretty old looking picture of the pair. Image from jamalrafaie.com

We don’t know the story behind their first meeting, but according to this article, which was allegedly written by Tun M (alleged because we can’t confirm the source), Tun M was just as shocked to hear that Anwar had decided to join UMNO. Which could be true, because Anwar was already quite a popular figure by that time.

Anwar Ibrahim wasted no time in making inroads amongst the UMNO faithful. In his first year in UMNO, he ran for the UMNO Youth Leader seat, and actually won! But that was only the beginning, he would rise from being just the Minister of Culture, Youth, and Sports to Agricultural Minister, and then to Education Minister….all in the short time span of 4 years!

His steady rise to power must also have caught the eye of Tun M for the one that many people described as a “dictator” had allowed Anwar to rise so many ranks in such a short time. The late Tun Ghafar Baba. Image from The Rakyat Post.

Anwar however, never seemed satisfied with what he had achieved. He had his eyes set on something much bigger: the role of Deputy Prime Minister. It would take him a while to make his next move, but in 1993, he finally did. He ran against the DPM at the time, Tun Ghafar Baba, who at 68 and more than 20 years his senior, was already among the veterans of UMNO.

There will be no prizes for guessing who won. Anwar had become DPM, and Tun M seemed quite content to let him to take the place of Tun Ghafar, whom just a few years earlier stood by the PM’s side when UMNO split into two.

Anwar had already been appointed Finance Minister 2 years before that, but now that he was DPM, he became a household name not just in Malaysia, but worldwide. And oh how the world adored him. Image from Time Magazine.

It was often said that Tun M was already grooming Anwar to take over from him when he retired, but that all changed when that financial crisis hit.

NAH, BACA:
BN won in Perlis, but its new Menteri Besar is Independent. How does that work?

The financial crisis that became a relationship crisis

Maybe, just maybe, if the Asian Financial Crisis of 97/98 didn’t hit Malaysia, we may have seen Anwar Ibrahim as our PM after Tun M. But the crisis is often mentioned to be the breaking point of their relationship.

The Asian Financial Crisis of 97/98 started when the economies of developing Asian countries started to collapse. Malaysia was not spared, and so was the relationship between Tun M and Anwar. And thus began the painful breakup. Original image from mynewshub.cc

Anwar wasn’t satisfied, but this spurred him to push on to his final ascent: To take the position of Prime Minister from Tun M himself.

“In the run-up to the UMNO general assembly in June (1998), he spoke of “weaknesses in internal policies” and warned that “we may face the Indonesian situation where the people demanded changes. We have to make changes before it is too late.”” – CNN on Anwar Ibrahim

On the eve of the UMNO General Assembly in 1998, Anwar supporter, Zahid Hamidi (yes, he was once an Anwar supporter), brought up allegations of cronyism, which Tun M saw as a challenge to his authority by Anwar and his followers.

And he even he got a black eye from the Police Chief. Image from keadilandaily.com

That seemed to be the last straw for Tun M. Anwar was eventually sacked as DPM and from UMNO a few months later. Anwar, being the ambitious person that he was, refused to back down and started his ‘Reformasi’ movement to protest against his sacking, and against the gomen itself. He ends up leading tens of thousands of people to call for Tun M to resign as PM which eventually gets him arrested. Funnily enough, it’s also around this time that allegations of him being a homosexual start circulating.

Anwar returned to politics stronger than ever

It’s been 5 years since Anwar’s conviction, and about 2 years since Pak Lah had taken over from Tun M. The country has calmed down a bit, and UMNO has returned stronger than ever, proven by their big win at the 2004 General Elections. Anwar around the time he was released from prison. Image from abc.net.au

But just a few months down the line from the elections, and it was announced that Anwar was being released early from prison because of a combination of good behaviour, and his sodomy conviction being overturned. You’d think that being in prison would have slowed him down, but it didn’t. Though he was still banned from politics for a few more years, (because his other conviction still stood), he was soon installed as the leader of KeADILan, the party his wife had formed while he was in prison (later known as PKR).

Fast forward to the 2008 General Election. Despite BN’s best efforts to have the election BEFORE Anwar’s ban expired (it expired a month after the 2008 GE), they still suffered their worst defeat ever at the hands of the opposition. And if the opposition was capable of winning big without Anwar at the helm, imagine how much stronger they would be if he was leading them. Well, that’s exactly what happened at the 2013 General Election. The opposition still didn’t win, but they were able to rally crowds like these. Image from Straits Times.

But what about Tun M? Well, he would end up being unhappy with both his successor, Pak Lah, and his successor’s succesor, Datuk Seri Najib Razak. While Pak Lah seemed to be a little easier to get to step down, PM Najib has managed to resist the pressure from him to do so.

But all that only leads to their eventual (attempts at) reconciliation. Though it may seem that Tun M was the one who made sure he went to jail, Anwar seemed to have let go of his anger rather quickly. After his release, Anwar reportedly said this.

“I bear no malice against him. Let him retire.” – Anwar Ibrahim, as quoted by theage.com.au

“I find it difficult to forgive Anwar for demonising me in the eyes of the whole world. Anwar should have been the Prime Minister of Malaysia today. But if he is not, it is because of his own actions. He left me no choice but to remove him and I did what I thought was best for the country. I may have made many mistakes, but removing Anwar was not one of them.” – Tun Mahathir in 2011, as quoted by Asiaone

Tun M and Anwar are back at it? What’s the worse that could happen?

Wellllll we really can’t say for sure that they’ve put all their differences aside and are working together like they used to. In fact, while Anwar did voice some support for Tun M’s Citizens’ Declaration, it’s reported he eventually warned PKR to be careful about working with Tun M. But now, opposition coalition Pakatan Harapan has made Tun M their Prime Minister candidate, with the consent of all the major members (finally), including Anwar himself.

Obviously it was never gonna be easy for two former enemies to suddenly be able to work together again, but it’s been said that without conflict, there can be no growth, and even if it’s took 19 years, the fact that they’ve met again is possibly… growth. And even though it didn’t end so well the first time, perhaps it’s only fitting that they would team up now, when they see that the country is in conflict once again. “You’re telling us we’re gonna fight, not see each other for 18 years, and then team up again to fight for change together? Get outta here!” Image from dinmerican.wordpress.com