Public schools (termed Sekolah Kebangsaan) in Malaysia have been getting bad rep for years, and with the recent loosening of regulations in international schools, middle-income families have started making the shift rapidly. In a recent article by The Malay Mail, parents are forking out up to RM100,000 annually to send their children to international schools, citing that they wanted a well-rounded education with quality facilities and special classes.

Kebangsaan schools are most often regarded as unstructured, unsafe and poor in standards as compared to public schools in other countries. It also doesn’t help that news such as student abuse, violence among students, poor education standards and racial mistreating pour in by the dozen. In fact, Malaysian students have also been said to perform worse than rural Vietnamese students, as PISA – a world student performance assessment – measured that the students from the 2012 results scored below average or ranked 52 out of 65, whereas Vietnamese students ranked 17 out of 65. It is no wonder why middle-income parents are pushing their financial limits to secure their children’s future, be it in the area of lifestyle, learning opportunities or the overall experience.

As ex-Kebangsaan kids, we’re not putting down privately-schooled children but rather, looking at the bright side of life. 11 years of singing lagu-lagu perpaduan, following questionable syllabuses, enduring biased teachers and attending daily perhimpunan sessions under the blazing sun have given us a certain kind of grounding in life. Read on as 10 other readers share how Sekolah Kebangsaan made them who they are today.

(Names with an asterisk (*) have been changed) 1. We’re used to being compared to and we don’t stress over it

“If there’s one thing every Kebangsaan kid knows, it’s being compared to Chinese school students all the time. Sure, they’re technically Jenis Kebangsaan, but they were always called hardworking, disciplined and smart while we were always thought of as lazy losers. Well, – I’m not going to live the rest of my life as a nerd. I’m happier chillin’ out.” – Aaron K, 31 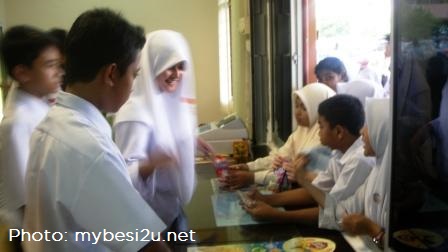 2. We know how to handle a cheapskate

“I learned two main things from ‘Kedai Koperasi’: one, I was pretty damned surprised to find out just how stingy, dodgy, advantageous, and cheapskate my friends could be – even the privileged kids! Two, never, ever, EVER trust a sweet-talking teen that’s desperate for Twisties. They’ll steal, man.” – Mukriz R, 30 3. We (probably) have a high pain and humiliation tolerance

“When I was in school, we used to have teachers punish us for stuff like forgetting our books, forgetting our homework, answering a question wrong, chewing gum… Y’know, the tiny stuff. I’ve had my waist pinched, my sideburns twisted, hands caned and ass whipped – IN PUBLIC, no less. Kind of makes you wonder what else we couldn’t endure.” – WK Neo, 26

4. We have learned the art of being crafty…

“The annual ‘Larian Desa’ was the best. Only 5% of the students would actually run and the other 95% of us would walk and chat. I took the chance to ‘lari sampai balik rumah’ because my house was in a nearby residential area. Where do you think I learned to schedule work appointments at 3pm, just so I could leave for home at 5pm?” – Michael C, 29 “In our school we had something called ‘Program NILAM’ where we had to read books and write summaries in a designated NILAM book to monitor our progress. If we hit a certain number of books, we’d get a fancy certificate. A few of us cheated by getting our domestic helpers write programme summaries in ASTRO magazines. I guess you could say we worked smart, not worked hard?” – Nick S, 27

NAH, BACA:
Meet SAINS, the political party that started as a Twitter meme “As a Penolong Pusat Sumber, I had to take turns to stay back after school. They scheduled two librarians to cover each session, so my librarian boyfriend and I made sure we were always on the same shift. We made out behind book racks, at the reception table and in the projector room without anyone noticing. Dirtied some books too, if you know what I mean.. D’ya think we’d get away with CCTVs in private schools? Yeah, didn’t think so.” – Alexis*, 26

Editor’s note: This entry has been edited to achieve a PG13 rating. 7. We can handle third world standards

“Have you ever been into a toilet that perpetually smelled like pee, even after the cleaners come in? Or having to sit down on scorching tarred roads during daily perhimpunan sessions, while teachers hide in the shade? Maybe used vandalised furniture that’s been broken, fixed and broken umpteen times? I have, and unfortunately I’m used to these standards.” – Susan C, 27 8. We can blend in to any culture with ease

“Unlike private schools which were generally hosts to wealthy kids, I grew up with children of different races and walks of life. During Pendidikan Jasmani, we’d be playing football together regardless of our differences. We studied and played together, making it so easy for me to blend in with just about any culture now that I’m on my own in the workforce. Just can’t beat that.” – WS Neo, 29 9. We recognize and are familiar with the need for extra guidance

“Our public school teachers were just either hopeless or heartless, making learning seem difficult or almost ineffective. So, instead of having the afternoon for revision and fun, we added on the ‘challenge’ of attending home or commercial tuition centres with double the amount of homework to help us score in our exams.” – WC Kwan, 26 10. We learned that the best things in life are sometimes the smallest

“Nothing was more fun than days where the Milo and Vitagen trucks came. Seriously, you just cannot beat the sense of manic and euphoria at the sight of one of those. And to top it off, kids from poor families were given packs of tiny UHT chocolate milk drinks with cute cartoons on it… You’d have to be really protective of it ‘cause all the other kids would try to take it from you!” – Ann Y, 29 11. We learned how to watch out for ourselves…

“We had two sessions in a day (Sesi Pagi and Sesi Petang) and we were natural enemies. Having to share our tables, chairs and whatnots, a lot of us were territorial and defensive, making sure we took home all our things and never leaving it for our ‘enemies’ to destroy. Torn books, nasty messages penned onto tables, vandalised notice boards… Always come prepared for battle, guys.” – Natalie J, 27 “We used to have this ‘program bimbingan’ where a few seniors would play mentor to juniors who were failing in their studies or in their social life. It was a little burdensome, I’d be the first to admit, but when you’re given an insight into another person’s less-than-fortunate life, it kind of makes you grow up, start caring, be thankful of what you have and use it to help someone’s life.” – Goon, 30