Since the pandemic rolled around in March, many of us found ourselves stuck at home, trying to find productive ways to keep ourselves occupied. But realistically, we ended up scrolling through TikTok for hours on end, or singing along to the “Xue Hua Piao Piao” song during our home-karaoke sessions. Things which usually can only be done in the comforts of our own homes.

But what if you’re sharing your home with hundreds of other people?

For those of you living in apartments and condominiums, impromptu karaoke sessions would probably not be allowed to happen. And with the MCO in place, more people will probably be stuck at home too… which means that there’s a higher chance that disputes might happen. That’s where the condo management, or more specifically, the condominium manager comes in. If you haven’t met this person before (or if you’ve never lived in a condo); they’re basically the head of customer service, security, finance, and mediator for a condominium all packed into one hooman. And since the Cilisos writers are a kaypoh bunch, we interviewed a condo manager whose been in the biz for 11 years across 5 condos to ask him what the residents themselves might not know about condominiums. Of course, he asked to remain anonymous so we’re going to call him Tauge in honor of his love for Char Kuey Teow.

1. Condominiums actually collect A LOT of money from fines.

According to Tauge, one of the rules that has gotten him the most hate with residents is clamping. He said that the clamping rule has become his least favourite rule, as it gets broken so often and has become tedious to enforce. While that wasn’t such an exciting fact, what really surprised us was how much people have paid in parking fines:

“The most I’ve ever collected from clamping fees in a single year was RM 30,000. And the amount is quite consistent throughout the years as well.” – Tauge, in interview with Cilisos

Yes, you read that right. In a single year. Tauge also told us about his second-least liked rule, which is littering. Unlike something obvious like an illegally parked car, Tauge notes that littering is an incredibly difficult rule to enforce.

“One of the most difficult rules that I have had to enforce is littering. Especially with cigarette butts. But honestly, I don’t think it applies to condominiums alone. I’m sure that if you drove around KL, you’d probably see used disposable face masks lining the streets.” – Tauge

With that being said, where exactly does all the money go? Unlike the misconception of Malaysian authority figures who tend to masuk duit dalam pocket; the money, fortunately, goes back into the condo, where it’s used to fix and maintain the condo’s common grounds and facilities. So if you notice that your condo needs a new paint job, you could always start leaving your car in no-parking zones. (We’re joking of course! Or are we? 😉)

2. Condominiums see quite a number of deaths.

(Note: If you takut hantu and live alone in a condo, then you might wanna skip to point 3…)

You’re gonna want to sleep with your lights on tonight, kids. Because this fact is a terrifying one. Condominiums see a lot of deaths. First of all, we have deaths due to natural causes such as residents dying of old age or chronic illnesses, which naturally occur in residential areas as the old and sick usually stay home and rest. And unfortunately, there are also deaths that occur due to unfortunate incidents; such as accidents, suicides, and even murders.

But what if we told you that a condominium may have seen death even before its first resident even steps in?

According to an ex-contractor and former construction site manager who we will cheekily refer to as Bob The Builder (yes, he also asked to be anonymous), high-rise construction developments see an average of about 1-2 deaths of construction workers per development. He noted that though these instances usually go unreported, it has become somewhat of an informal fact that is understood by many of those in the Malaysian construction industry.

We also found a research paper conducted by Nor Haslinda Abas, with information obtained from the Malaysian Department of Occupational Safety and Health (DOSH), which shows that one of the primary causes of fatalities in the construction industry is due to the “fall of persons“, which peaked between the numbers of 40 – 45 in the years 2006 and 2008. Oh! And so you tidak confused, both Bob’s statement and the research paper refers to high-rise buildings in general, and are not limited to condominiums alone.

We asked Bob for his input on why these instances have occurred in the past.

“One reason is that because the scaffolding is often unstable, sometimes it could fall, or even break while a construction worker is standing on it. Sometimes, there are construction workers who accidentally fall off the scaffolding due to exhaustion. There have also been incidents where people have fallen through the holes in the floors where the lifts would usually be placed.” – Bob The Builder, in interview with Cilisos

So while the chances may be low… high-rise buildings such as a condominium could have seen at least a death or two in its development stage alone.

NAH, BACA:
No plans this Sunday? Come to Plaza Low Yat and you may learn how to dance and make salsa

3. Some residents can be mean, or downright dangerous.

Speaking of deaths, Tauge told us that there have been moments where disagreements with residents became physical. He notes that one of the most memorable ones was when he acted as a human barricade when a hearse tried to enter the condominium compounds.

“A resident and their family members wanted to hold the funeral in the condominium compound, and I told them no, because of sensitivity issues. But they still tried to get the hearse to come in without permission. So, I stood in front of the hearse and tried to block it with my body, while the security guards called the police. I got hit a few times in the face, and got dragged away by the angry mob.” – Tauge

Tauge said that a small fight ensued until the police were called, which resulted in everyone being taken to the balai polis. But this isn’t the only time the police got involved. As the condominium manager, he has also assisted the authorities in coordinating for raids on condo residents suspected of operating drug dens, a murder investigation, which even ended in a high-speed police chase. We can’t share the full video to avoid revealing the condo, but here’s a short clip:

Converted into GIF by makeagif.

But nowadays, Tauge’s biggest work headache is Covid-19. Since the start of the pandemic, he’s had several days where he’s had to show up for work at 3.30 in the morning just to sanitize the area by himself after a case involving a resident has been reported, in order to ensure that the condominium facilities are safe for usage. But even then, there are still residents who are unsatisfied. Tauge went on to tell us that he’s even had someone come looking for him in his office with a handsaw, while he was out for lunch. He says that threats and screaming matches have become an everyday occurrence, to the point where he’s become desensitized.

“I’ve been threatened, screamed, and cursed at during arguments with residents countless times. One of the most memorable ones was when someone told me that outside the condominium, I was nobody, so ‘I should watch my back‘.” – Tauge

Tauge also told us about one of his favorite “scoldings”, where a resident gave the best reason for not following the rules:

“One time, a resident told me that “Ini Malaysia lah! We are not like Singapore!”, when I told him that he needed to abide by the condominium rules. I found it quite amusing.” – Tauge 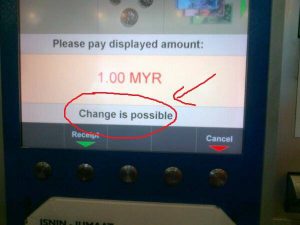 So don’t be malas and play your part, okei.

If you’ve ever wondered why your condominium’s rules aren’t the same as your friend’s, it’s actually because not all condominiums share the same rules. Though they do generally follow the same basic set of rules, many condominiums do customize their own additional rules, based on factors like size, number of residents, funds needed to maintain the condominium, as well as the needs of the residents.

“Condominiums generally follow by the Strata Management Act,  But depending on the size of the condominium, they may fine-tweak some of the rules or add on additional rules to better suit the needs of the condo.” – Tauge

But how exactly can residents ask for a change in the rules?

While a home is what you make it, that saying becomes a little more complicated when you have neighbors in all directions.

The only way to change a rule you don’t like is to submit a proposal at the condo’s AGM (Annual General Meeting). If the residents attending vote in majority – and assuming it doesn’t break other rules – then congrats, you’ve just changed the rules! So it becomes the condo manager (and the rest of the staff)’s job to enforce these new rules that the majority of residents have decided would make their living experience better.

But we’re pretty sure that no one is going to agree to let you sing Xue Hua Piao Piao at 3 in the morning lah.