When it rains, it pours. The phrase accurately and emphatically summarizes what’s been going on around the country: an uptick in the number of scams during MCO. So, what’s the deal with MCO scams?

Well, scammers have cooked up New and Improved™ tactics to get Malaysians to unwittingly give up their cash. As a matter of fact, these fraudulent tactics have conned Malaysians out of more than RM100 million since March 2020. That astronomical sum begs the question: How convincing were these scams to have worked so well?

A scammer hard at work trying to lighten your burden and your bank account.

To answer that, we went around looking for some MCO scams and rated them according to how convincing they are. Our methodology is simple: how likely will we fall for these if our uncle forwards them to our family WhatsApp group? Oh yeah, let us know what y’all think by answering the polls as well. Without further ado, let the Fraud Fest begin!

We’re starting off basic – the typical e-commerce scams we’ve seen before. They’re the kind where the victim buys a product online, but they’re either fake, or the product never gets delivered. Here’s the twist – scammers have started to take advantage of the increased demand for healthcare products like face masks.

If you think people are losing maybe RM50 to these scammers, think again. Two Penangites were fleeced out of nearly RM42K while trying to get their hands on some face masks while another online trader lost roughly RM108K thinking they were gonna turn a profit reselling face masks. Zhang Lin, the 43-year old Chinese national who got swagged on by a scammer.

The champion for this one has gotta be a Chinese mainlander whose passport and RM600K got songlap-ed in a similar scam. She ordered 1.1 million face masks and handed her passport to a conman because he could allegedly help her renew her visa, but we know how that ended.

Rating: ★★☆☆☆ 2 out of 5 stars. No effort went into innovation here. You hate to see it. These are just your average e-commerce scams with a different coat of paint.

A little more creativity went into some of these investment scams that cropped up in the latter half of last year. One scam involved messages being passed around WhatsApp with the Amanah Saham Nasional Berhad (ASNB) logo to get gullible geese to deposit money into a bank account for “investment purposes”. 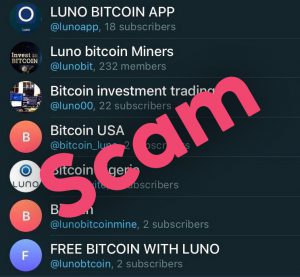 Tag a friend whose WhatsApp inbox looks like this. Img by Luno

In another nefarious scheme, an honest-to-goodness fake Bank Negara Malaysia website was set up to harvest login credentials. A hospital consultant in Pahang was parted with almost RM64K after men who claimed they were from the Malaysian Anti-Corruption Commission and Royal Malaysian police approached the victim and instructed him to use the fake website as part of an investigation process. There’s a separate app version of this scam, but it’s the same thing with extra steps.

The last investment scam has a bit of a happy ending: Bukit Aman managed to crush an online investment scam syndicate that was using the brand “i-Rakyat Trade” to offer high-yield “investments” via Facebook.

Rating: ★★★★☆ 4 out of 5 stars. From personal experience, it’s not simple setting up websites and coding apps, especially if you wanna convince your potential victims your platforms are legit. We could see ourselves falling for one of these.

With the rakyat scrambling to get COVID-19 vaccination appointments, it was only a matter of time before opportunists came up with vaccination scams. The deal seems pretty sweet; if you fork out a little money, you could have a guaranteed vaccination slot! Realistically though, you’re just getting played. Some victims have reported that these appointment scams also asked for personal data and bank details, apart from money. 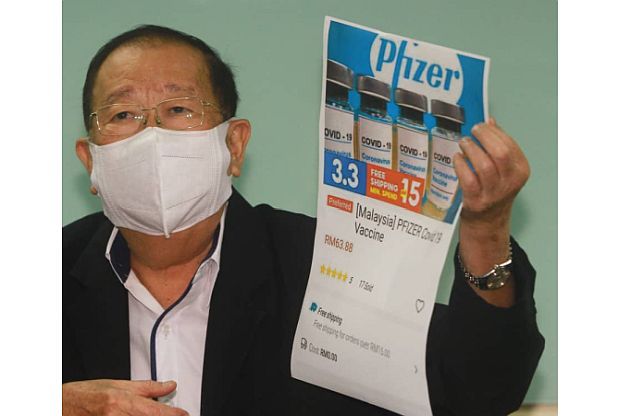 It’s so cheap! Let’s get a 10-pack for the whole family! Img by The Star

People who make and sell counterfeit vaccines prey on the same fear of missing out on vaccines. Scams usually result in victims having their money taken away, but fake vaccines have an additional, sinister consequence – they can be fatal. Don’t get your vaccines off Shopee, Lazada, eBay or other shopping sites, ladies and gents.

Rating: ★☆☆☆☆ 1 out of 5 stars. Again, do NOT trust anyone that attempts to sell you vaccines or vaccination appointments. To scammers that resort to these strats: y’all real low. By the way, if any business owners out there are planning to get vaccines for their employees through the Selangkah initiative, this is their official site.

NAH, BACA:
[PHOTOS] This Orang Asli school may be on par with private schools, thanks to this headmistress

No one would willingly give up their private info for free, right? Of course not, but what if you’re in need of a cash injection from, say, a government assistance scheme that you’ve applied for weeks ago?

Lembaga Hasil Dalam Negeri (LHDN) released a statement last year warning Malaysians of fake SMS messages going around asking recipients to reply with their banking details. In return, these potential victims were supposedly going to receive their Bantuan Prihatin Nasional payments within 24 hours. These fake texts looked somewhat close to actual texts that LHDN sends out, except the sender numbers are mighty sus. A more recent example of a fake government aid was the “Bantuan Warga Emas” scam. Apparently, a series of viral WhatsApp messages claimed the government was giving a RM500 monthly angpau to senior citizens in Malaysia, and all they had to do was click the link accompanying these messages. We didn’t manage to find out whether any unknowing elderlies were swindled out of their pension, but we sure hope not.

Rating: ★★★☆☆ 3 out of 5 stars. Props for inventing a whole new government scheme, but old people should be off limits, man.

EPF scams made a comeback in a big way in 2020 and 2021. In March last year, our PM, Tan Sri Mahiaddin Yassin (Muhyiddin Yassin as he was known back then) announced that EPF contributors could make withdrawals as part of the i-Lestari initiative so that folks in need could fall back on their EPF funds. RIP in peace to 30 years of EPF savings.

Scammers started posting on social media platforms shortly after offering to “help” people withdraw their EPF savings. That’s a bit like a friend offering to “help” finish a piece of your fried chicken that you’ve been saving for last.

Rating: ☆☆☆☆☆ A big fat 0 out of 5 stars. It takes balls of steel to openly try to commit crime on social media platforms, but balls and brains can be mutually exclusive, it seems.

If it sounds too good to be true, it’s probably not true

There are two things you can’t avoid in life: death and taxes. What you can avoid, though, is getting deprived of your cash. These scammers have upped their game (in all the wrong ways) over multiple phases of MCO, but don’t get greedy, and be wary of any links that you’re about to click.

If you’re a victim of a scam, don’t take it lying down. Lodge a report to the relevant authorities or the Malaysian Communications and Multimedia Commission. Who knows, you might be able to recover any losses you’ve suffered but more importantly, you can help prevent other Malaysians from being scammed as well.