Remember when you were 15 years old and your biggest worry was PMR? Getting straight As, getting into the Science stream, that crush you had on the lengchai in class, your girlfriends and their pimple freakouts. Well, if you can relate to this, you’ll know that your life was pretty decent…

… especially when you compare it to a 15-year-old girl who now has to care for a child of her own, facing judgements from the people around her for what seem like a hellish incident. 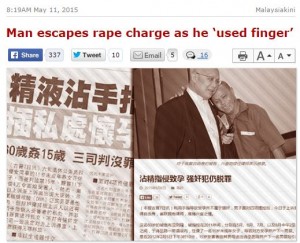 Finger-raped at 15, this young girl from Sibu probably be going through a very different kind of teen-life than us.

In May 2015, news broke when a 57 (now 60) year old man had inserted his semen-coated fingers into this 15-year-old girl’s vagina. In case you were wondering, yes, she got pregnant from the act and the DNA of the baby confirms this man to be the father. To put two and two together, she’s a minor and it was allegedly involuntary… but the court decided to let the man walk free.

For many Malaysians, this was our natural reaction: 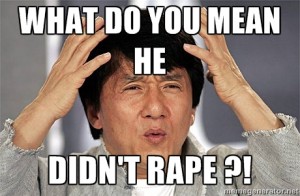 Actually… he did, at least according to the Sessions Court and then AGAIN in High Court. But the Court of Appeal (the highest court for this case) said otherwise.

OMG… Is the law in Malaysia useless then?

First of all, what IS ‘rape’? And did you know that the definition of ‘rape’ in the UK (which is where modern Malaysia got our laws from, btw) may not be the same in Malaysia? Like whuuut?

See, the definition of rape differs in each country. In Malaysia, rape (Section 375 of Penal Code, pg 145) happens when a male forcefully inserts his penis into a female’s vagina without a valid consent. There are certain exceptions to that definition, but it seems simple enough right? Well, the people who attended the #HentikanRogol rally in June didn’t think so, and neither did the 1000 over people that signed this petition who demanded changes to the rape law.

So we search the news and ask some lawyers about how the Malaysian rape law needs to change.

1.Don’t be so fixated on the penis

After the uproar, many people have put forward their ideas on the possible amendments  to the definition of what amounts to rape. Question is, how wide should the amendment be?

Let’s start by looking at what some other countries have done.

As far as we know, Singapore’s definition of ‘rape’ is pretty similar to Malaysia, so they’d probably charge him instead with assault by penetration. The UK has tweaked their definition to include all three orifices (mouth, vagina, anus) to make it gender-neutral, but kept penile penetration as a requirement. In India, the law includes the insertion of any object or a part of the perpetrator’s body into the urethra or anus of a woman. Yeap, it’s still considered rape even if a pen was used!

Despite its progressiveness, it seems that countries cannot be in agreement over the definition of ‘rape’. So how should Malaysia rework ours? Well, over here, several people have put forward their idea on how it should be and it ranges from:

These all carry weight, as the judges in the ‘finger-rape’ case had their hands tied since the alleged rape took place with fingers, not the penis. They cannot say it was rape unless they consciously overstep their jurisdiction. So instead, even they themselves have called for amendments (check out para 78, page 59) to be made to the definition!

And what about men who get raped? Wouldn’t the law seem unfair for them if they, too, were sexually forced upon? In 2013, The Star ran an article on when men become victims of rape, which shows how difficult is it for them to get aid and justice. Since society itself doesn’t seem to believe that men can get raped, can you imagine how a male rape victim would feel if he actually said something about it?

2. All sexual-offence convicts should be put on a public list.

Currently, Malaysia does not have such a system, although there are talks about it. However, the IGP said that it would be redundant because we already have a criminal registry which lumps all criminals (regardless of type of crime) into a single book (figuratively la). He is also adamant that the existing registry should not be made available publicly. Although he didn’t mention why, it’s generally understood that by making it public, we’d encourage prejudice towards the offender.

In the UK, those who have committed sexual offences after 1997 are required to register under the Violent and Sex Offender Register (ViSOR). A convicted sex offender must register when convicted and also continue registration annually for a certain period of time. This registry is not made public; ONLY in the US is such a registry made public.

There is no doubt that this is an imperfect system. You win some, you lose some. For the parents with this system they can always run a check on adults their children interact with. Wouldn’t you wanna know if your neighbour is a sex offender? However, to do so will be at the expense of the privacy of former sexual offenders, some of whom might have even turned over a new leaf.

While the privacy of the perpetrators is subject to debate, the safety of our community cannot be compromised. Using a publicly-available list, all of us can keep ourselves safe-r, whether to simply check on the person we’re dating or to seriously consider a new neighbourhood to reside in.

Plus, even if the list isn’t made public, a specified list of sexual offenders can still be given to the neighbourhood police to protect the public. Wouldn’t we all feel a little more secure that way?

3. A marriage certificate cannot be a licence for forced sex. 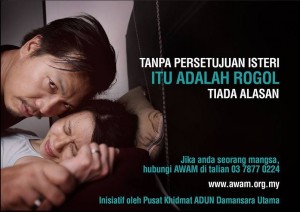 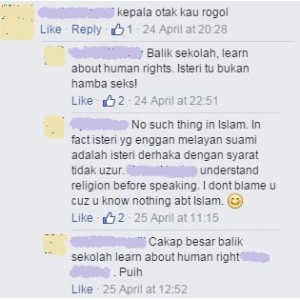 The gist of the arguments when it comes to this issue. Taken from YB Yeo Bee Yin’s Facebook

Let’s talk about marital laws instead. If you were married, and if your husband forces himself onto you even though you don’t want sex, is it rape? He paid the dowry, he signed the papers, he said his vows… So does this mean that sex is a given right?

NAH, BACA:
If X-MEN were Malaysian... here are 10 superpowers they should have!

In Malaysia, this isn’t recognised as rape. Despite efforts from the public to make this change, YB Nancy Shukri, de facto Law Minister said that forced sexual intercourse between husband and wife is not considered rape. The decision was based on research and findings of a special select committee in 2006. Recently, she reaffirmed this position after this video by ADUN Damansara Utama, in collaboration with AWAM got people talking.

While some consider this amendment to be crucial, several others are opposing it using religion as a context. Several of the more controversial statements were by the Perak Mufti who stated women must have sex with their husbands even while riding on the back of a camel. A spokesman from Hizbut Tahrir Malaysia, an international Islamic political party, also stated, “Even if it’s by force, it’s not sinful for him; the sin is on his wife”.

Based on a press statement by the Association of Women Lawyers, here’s why this amendment is important:

This position of law originates from way back in the day, when wives were seen as property of their husbands. Since then, women’s rights have progressed so much that retaining such a clause is an insult to women.

Currently, there is only minimum protection for the wife; the husband is only charged when he injures his wife for sex, whereby he can be sentenced to jail for up to 5 years. That is not even the case all the time because some husbands get away with a lighter sentence when they are charged for other sections under the Penal Code. For instance, in this case, the husband would only be jailed for a month for causing harm to his wife for refusing sex.

4. Be less tolerant of any sexual offences involving minors Faces of innocence. Taken from allanaphiliba.com

Let’s retract and talk about the 15-year-old ‘finger rape’ victim whose alleged rapist walked free. How’d he even wriggle his way out of this, knowing the very fact that she was a minor? In this case, many were of the opinion that the lawyer representing the man was crafty in his arguments as opposed to the prosecutions.

“A lawyer with his briefcase can steal more than a hundred men with guns.” – Mario Puzo, writer of The Godfather who probably didn’t really like lawyers

They are only children, regardless whether they’re 3 or 12 or 16. They’re vulnerable to adolescent curiosity, and if we don’t protect our children, who will? With too many perpetrators out in the open, we need to do all that we can, to protect our flesh and blood from being victims of this heinous crime.

While increased jail sentence for sexual offender is debatable, the government should consider implementing it, especially where minors are involved. Currently for rape, regardless of the age of the victim, sexual offenders are sentenced to imprisonment for a maximum of 30 years (minimum 10 years) with possible whipping, if found guilty. In certain countries (like the UK), such an offence is punishable by life sentences.

Well no doubt that Malaysia’s 30 year sentence ain’t short, but the judges here do have the judicial discretion to reduce jail sentences. In fact, in 2012, YB Nazri Aziz, the de facto law minister then, said that the law will be amended to prevent judges from lifting jail sentences in cases involving minors. Many called this hasty and agreed that better education for judges was a more reasonable opinion.

In countries like Russia and South Korea, sexual offenders in cases involving minors may be subject chemical castration. When treatment is discontinued, the effects of the treatment is generally reversible. According to this article, a Scandinavian research suggests it can cut rates of re-offending from 40% to 5%. (We tried tracing the study but couldn’t find the exact source online.) While some perceive this punishment as a symbolic retribution, Amnesty International deems this treatment as inhumane.

All the methods of punishments for sexual offenders have their critics. In the end, what matters is if the punishment would protect minors from sexual crimes. Nevertheless, taking away the blame from minors when it comes to sexual crimes against them would be unfair in some cases. Perhaps, minors are having sex at such an early age because of misguidance and curiosity. So, will the hotly debated idea of implementing sex education in Malaysia solve sexual crimes? Possibly… Despite the calls for review of the finger-rape case from various parties, Deputy Solicitor-General (I) said that there will be no further review of the case.

Senior lawyer George Lo in his article suggested that Bunya be given a new charge for sexually abusing the 15-year-old girl.

“We can only hope that the prosecution can still charge him for a lesser offence because, otherwise, our system will have failed that poor child.” – George Lo, senior lawyer

For now unless new evidence emerges, it is unlikely that the alleged rapist would be facing jail time.

What about the girl? 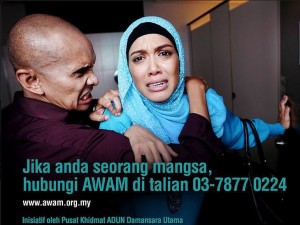 According to reports, her mother would legally adopt the kid as her own. So now although biologically the baby is the victim’s son, he would now be her… brother? This just shows how messed up the consequences can be for a rape victim in such situation.

These problems with rape laws are not new, neither are they exclusive to our country. As citizens we can change the law by signing a petition to make our voices heard. Our call for change should not only appear when an incident arises, and end with us being keyboard warriors. We shouldn’t have to wait for another incident to amend our laws. If you do know a rape victim who is still suffering from it, encourage her to give AWAM a call….