As Malaysians, we’re really action about a couple of things like our food, driving skills and multicultural harmony. But what truly defines us as Malaysians is our ridiculous and wonderful language. Our own brand of Malaysian English. Manglish. Sounds like a mixture of Mango and English? Yum. How does one describe Manglish anyway? Here’s a cute analogy. Imagine a bowl of Maggi Mee. The noodles represent the English language where as the seasonings, soup and dried veggie are all the other main languages spoken in Malaysia: Malay, Tamil, Mandarin, Hokkien etc.

Manglish is unique because it’s peppered with slang words derived or borrowed directly from the many languages spoken in Malaysia. But do you know the history behind these words?

Disclaimer: Truth is no one ACTUALLY knows the origin of these following words. But we decided to compile the most interesting ones anyway, CILISOS style. This is Datu Paduka Mat Salleh! Photo from engineering-machanical.blogspot.com

This is a favourite term to refer to our Caucasian braders and sistahs. It is also interchangeable with ang moh, gweiloh. Ugaiz must have come across Datu Paduka Mat Salleh in your Sejarah books before right? That cool pirate dude who led a rebellion against the British? This common term is thought to be derived from this dude’s name. However, there’s no clear link between a Sabahan rebel and Caucasian people, so there must be a better reason why we use Mat Salleh the way we do.

Agak-agak Origin: Ages ago, Westerners appeared in the form of drunk sailors on our shores. Apparently, the term ‘mad sailor’ was used to refer to them Jack Sparrow wannabes. 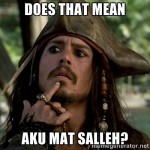 Cause locals were not familiar with English, ‘mad sailor’ translated to Mat Salleh in their native language! So when you call someone a Mat Salleh, you’re saying that they can drink you under the table. That’s a compliment alright.

Basically, potong stim means something/someone that kills the mood a.k.a killjoy a.k.a your friend Alan that doesn’t like chocolate. But potong stim carries a more boy-related definition. Remember this ad? 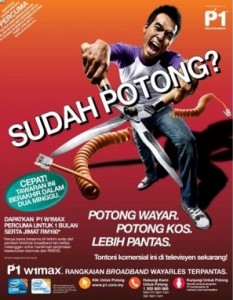 This ad got a lot of heat back in 2009 for insinuating a certain sexual innuendo. Judging from the image, the other meaning of potong stim is pretty self-explanatory.

Agak-agak Origin: Potong means cut lo (die lah if you don’t know). In this case it means to cut short or halt. But what on earth is stim? First thing that comes to mind is the word steam, but no. Stim is the short for stimulation! Wahlaoeh makes so much sense now. On a side note, potong stim would be such a cool saying if your connection gets cut off while on Steam. Gamers, you get it right? 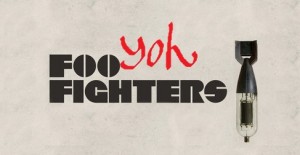 This word is basically what you say when you want to express astonishment. For example, ‘Fuyoh!, CILISOS got 12K likes d ah?’. Fuyoh is used when wow is just not wow enough. This word also can be shortened to fooh or fuh if desired.

Agak-agak Origin: Fuyoh sounds like a Chinese word but is actually a mash up fulamak from Malay and aiyoyo from Tamil, making fuyoh a muhibah exclamation. However, a blogger named Jee says that fuyoh is adapted from its Chinese meaning, wealth.

Wait. Isn’t this a British idiom? Surprisingly not. It might be used abroad to tell the time but us Malaysians went and berheboh and created our own meaning. Anyway, half-past six is an old school way of implying something is meh and below average.

Agak-agak Origin: One of the theories behind half-past six is that the Selangor Club in KL only allowed non-Mat Sallehs to enter at 6:30 pm way back when. Much discrimination. Another theory comes from our neighbours down south in the Lion State. This origin is also boy-related like the potong stim one. Oh well.

“Half past six is droopy, while midnight is impressive.” Champion. Screenshot taken from mysmu.edu, a Singlish dictionary 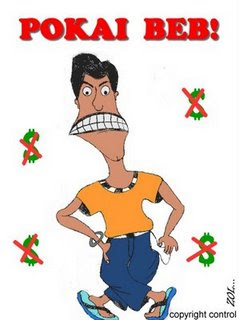 After paying off your credit card…. Photo from strawberrylettertwentytwo.blogpsot.com

When your friends want to have Nando’s but you can only afford roti canai, you are pokai. It sounds like a curse word but it’s not lah. Maybe it’s because it rhymes with so many famous Malaysian curse words. This is the Manglish equivalent to the word, broke.

Agak-agak Origin: Pokai is considered a Malay slang but it’s actually derived from Cantonese, which means to fall on a hard surface like a pavement or your ex’s heart . Eh, it’s also recognized in Kamus Dewan as a legit Malay word. Cool right. 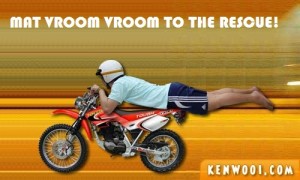 The word to describe talented motorcycle riders in Malaysia. They ride fast and do stunts. There are movies about them, there are songs written about them. Hai, you know what rempit means lah. But do you know how the word was coined in the first place?

Agak-agak Origin: Rempit is believed to be derived from the phrase ‘ramp it’ or ‘rev it’. Another theory is that it resembles the noise a motorcycle engine makes. Not vroom vroom, but remp-it? Let’s ponder on that for a while. Oh well, Mat Vroom Vroom just doesn’t sound as badass and dangerous as Mat Rempit. Interestingly, rempit carries a whole other meaning in the Perak Malay dialect. Over there, rempit means to whip someone with a cane. This word is famous and well loved by Malaysians to express satisfaction and pleasure. Yeah baby, yeah. It’s that feeling you have after eating a bowl of chili pan mee or riding the Vuvuzela at Sunway Pyramid. This word is also used in the phrase syiok sendiri to describe people who are self-absorbed and narcissistic.

Agak-agak Origin: Apparently, syiok/shiok is a stylo version of the Malay word, asyik, which means feeling blissful or infatuated with something or someone. It also can mean being to into something so much you forget everything else.

Another theory behind shiok is that is was adapted from the word, shauk, which means satisfaction in the Indian dialects of Urdu, Hindi and Punjabi.

Wow, going to explain the 8th word d ah? Abuden. Yup, this is the typical Malaysian and Singaporean response to an obvious question. Warning: You might make the person asking the question feel dumb for a while. You can either say abuden or ‘Wasn’t that obvious?’ while drinking a cup of tea with your pinky out. Your call.

Agak-agak origin: This expression is believed to be ‘ah boh’ from Hokkien which directly translates to ‘if not’ and the English word, then, glued together in perfect sarcasm harmony. Yes, we grudgingly acknowledge that abuden is originally a Singlish saying made famous by this fler below. But we Malaysians use it so often we kind of have adopted the word as our own. (Sorry, Singapore!). To really make it our own, we have created variations as well. Introduced by CILISOS.MY’s very own Jo-Lyn, is the word ‘abohow’. Didja know it’s also CILISOS’ runner up for favourite word?

Malaysian drivers sure familiar with this word wan. We don’t tell people to reverse their cars, we tell them to gostan. This term is apparently used more in the Northern states of Penang, Kedah, Terrenganu, and Kelantan. Eh, there’s actually a French DJ called Gostan, check out his music here.

Agak-agak Origin: Always thought gostan was a Malay word? We did too. This beloved driving lingo is derived from the English term, go astern. The original meaning of go astern has a nautical background explaining when ships moved backwards cause of strong winds or currents. Now, it is used to maneuver cars into sempit parking spaces.

Yes, most Malaysians can speak boring and correct English. But remember that we’re a bilingual bunch, meaning that we speak at least two languages! Those two languages are bound to influence the way we speak. And with the many wonderful languages spoken here, the rojak language process cannot be avoided.

And of course even we at CILISOS.MY love to make up our own words, change their spellings and create new meanings cause that is what Malaysians do. It’s accepted by most Malaysians but sometimes we get called out for it too. Like this comment section for a previous CILISOS article below:

To avoid instances like this in the future, people need to understand the difference between Manglish and Malaysian English. The latter is the English we learn in school and read in English-based newspapers like The Star. Malaysian English practiced for academic reasons and international communication where as Manglish is used by Malaysians for Malaysians. Manglish is like an official declaration of Malaysian identity yo, so don’t be afraid to use it.