Teaching might seem easy on the surface but most teachers would say that it isn’t. From workload to dealing with students… Teaching can be quite tough.

We’ve previously covered just how much Malaysian schoolteachers actually earn, and if you guessed that they don’t earn much, then congrats – you get invisible brownies. They don’t get paid overtime, and it’s common for them to use their own money on their own students!

Since Teacher’s Day is coming up tomorrow, here are 4 stories of extraordinary teachers who went beyond classrooms for their students.

1. The teacher who created a ‘murder scene’ in class

Typical classes with exercises and exams can be boring… MOST of the time. This teacher in Sarawak opted to conduct his class in an interactive way by using simulations in his English class. (If you’re a teacher and want to emulate, it won’t be a bad idea to use the module he found online.)

Based on his Facebook post, teacher Raee Yeoh created a murder scene of a Ms McGowan in his class 1 Lawas for their final exam at the end of the month. Raee set up a murder scene by placing a dummy (Ms McGowan) on the floor, clues and number tags around it for the students to infer and deduce, as well as confessions of 11 suspects around the classroom.

He alter-egoed himself as an angry head detective who would “whack” his newly recruited detectives (aka his students) who speak languages besides English. This encouraged his students to speak in English as those who have better command in English would help those who are weaker by communicating effectively.

“Your activities are the best, bah! We don’t need exams, we are willing to play games like this everyday.” – Raee’s students

But it’s not just about the game, though. Raee mentioned how the detective skills in his lesson were actually the usual reading comprehension skill (it is called inference) that students have been practicing since their primary school; the only difference was that he chopped a long reading text into 11 text excerpts and stuck it around the classroom.

His interactive method went viral until he was featured on a Chinese newspaper! Raee was spotted in a Chinese newspaper. Image from Amei Wong’s Facebook

Besides a murder mystery, he also conducted other hands-on activities based on various themes, such as an election day simulation, a Train to Busan team activity and a Lancelot & Arthur civil war play. He received many positive comments from teachers and the public who wanted him as their teacher. 😉

2. The teacher who brought Malay kampung kids to victory… in an English choral speaking competition!

Who would’ve thought regular kampung kids would end up acting in a movie based on their own story? Adiwiraku, a movie released last year was inspired by a true story of a teacher, Cheryl Ann Fernando, who brought the students of SMK Pinang Tunggal to victory in an English choral speaking competition.

Cheryl, who became a teacher after 8 weeks of training under Teach for Malaysia, was placed at SMK Pinang Tunggal, a rural school in Kedah as an English teacher for three years.

She faced challenges when her students were afraid to speak in English and would rather speak in Malay. She also mentioned in an interview with Astro Awani that slang was a barrier as she couldn’t understand the Kedahan Malay her students used to speak to her. At the same time, they couldn’t understand the KL Malay she would use to converse with them. Cheryl and her students. Image from star2

These challenges didn’t stop Cheryl as she used creative ways to help her students learn English. How? By playing games and using popular pop songs by Taylor Swift and Bruno Mars. Other than that, together with other teachers, they coached the students in choral speaking.

Cheryl recalled the first moment when she announced the formation of the choral speaking team. She mentioned how most of her students were afraid to participate but, with her encouragement, they finally did. They trained for six months and she saw improvements in their English whilst gaining the confidence to speak the language that was once foreign to them.

Lo and behold, the team made it to the top 5 in the Kuala Muda/Yan district level. A still from the movie, Adiwiraku showing the choral speaking team of SMK Tunggal Pinang. Image from star2

Not only do the students get to achieve such placing, we also mentioned how they were featured in a movie… about themselves! Believe it or not, Adiwiraku was starred by the students of SMK Pinang Tunggal themselves. Among the students who acted as themselves were Ahmad Adnin Zidane, Irdina Tasmin, Balqis Sani and Rizal Fahmi.

“I was touched by how hard the students worked. They were a very dedicated lot who never acted in their lives but had a lot of passion.” – Cheryl told Star2

3. The teacher who brought sports day back to a small Sarawakian town

Do you remember what it was like during Hari Sukan? While most would be semangat about Sports Day, some take it for granted cos every year also got what, right?

But not for SK Airport, Belaga, Sarawak.

Cikgu Syamil was a Sports and homeroom teacher for the Year 6 pupils in SK Airport. Known as Sekolah Kurang Murid (SKM) as SK Airport only has 104 students. Syamil told Says how the number of students in a school determines the budget given for the school.

He emphasised that the workload faced by teachers teaching SKM, however, is similar to other teachers besides adding how they had to fork out their own money when it comes to teaching creatively. Cikgu Syamil on the boat to SK Airport. Image from Says

And speaking of creativity, in 2012, Syamil and other teachers went all-out to organise a supposed annual event in most schools; Sports Day. Due to financial constraints (because Sports Day requires a lot of work and money), the teachers of SK Airport decided to DIY their sports equipment!

NAH, BACA:
This cultural dance was created in Kelantan, so why has it been banned there?

They transformed used wood to create the tools needed for the sit-and-reach tests, chairs for the students to check their pulse rate and tables for table tennis. They even stacked and sewed mattresses, covered them with plastic canvas to make the mattress used for high-jump activities. Not only do the teachers get to channel their creativity, the fact that the villagers were helping them out as well made the whole scene seem like a festival! Syamil told Says how the students were delighted and excited to be apart of the Sports Day.

However, it took SK Airport three years later to organise another Sports Day. In 2015, Syamil was determined to bring another Sports Day to SK Airport by putting his cause up on Give.my. He managed to raise over RM 1,600 (exceeding his target of RM 1, 300) in which were used to purchase sporting attire for the pupils, medals, and even rope for a tug-of-war game. 4. The resilient teacher who didn’t give up on an introverted student

There are many types of students in class, from hyperactive to shy and quiet. It’s easy for people to overlook quiet students, but not for this practical teacher.

A tweet thread that went viral late last year by practical teacher Amy aka @amymistika on Twitter, tells a story of how she managed to help an introverted student from 4 Einstein named Yip Kah Shzen to participate in her class. In her thread, she mentioned how she didn’t realise Kah Shzen’s presence as he was not only quiet but he was seated at the back of the classroom. When she asked students to introduce themselves, Kah Shzen only stared at his table quietly.

Amy decided to change the seating of the class by moving Kah Shzen in front so she could monitor him. She also implemented a class fund for students who fail to bring their books and calculators to her class. And as usual, when it was his turn, Kah Shzen simply stared at his table quietly.

Curious about how other teachers taught him, Amy decided to ask 4 Einstein’s class teacher who simply replied,

“You can’t do anything about him. You just have to let him be.”

She felt that it was unfair to just leave him alone, so she took a step further and initiated a conversation with him in Mandarin. That was when she discovered that Kah Shzen didn’t have the tools to learn. Concerned, Amy lent him a book and calculator which she retrieved from the school. In addition, Amy would guide Kah Shzen personally in class. In her tweet, she mentioned how she would repeat whatever she taught in class to him personally to ensure he understood the lesson. This was when she found out he was actually a decent student as he could answer 80% of any questions she posed correctly.

Amy’s effort didn’t only help Kah Shzen in his studies, but also changed him. He started to open up by interacting with her when he had left his ruler in class. He texted her asking about it: Conversation between Kah Shzen and Amy. Image from Amy’s Twitter

He was also seen mingling around with his classmates during a farewell party organised for Amy. 5. The teachers who brought in Ultraman to welcome new students

(Bonus cos not technically done by the teachers themselves, but pretty cool la.)

How many of you cried on your first day of school? We know how terrifying it can be! 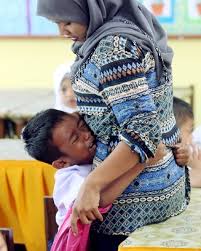 Have you cried like this before? Image by Eizairi Shamsudin via New Straits Times

These school teachers found a creative way to combat this fear by bringing in fun characters such as Ultraman and Mickey and Minnie Mouse.

Teachers of SK Sri Rengit, Batu Pahat, Johor brought two Ultraman characters to welcome students on their first day of school. The headmaster, Le Ronzee Samad mentioned that the school wanted to relieve students’ fears and anxiety to attract their attention to come to school.

“The children like Ultraman and it is a character that helps people, does not give up, will persevere and is always successful.” – Le Ronzee told The Star Ultraman combating student’s fears instead of the usual monsters. Image from Says

“When students feel good to come to school, they will have fun while learning and teachers will respond in a similar fashion.” – Ramlah Othman to Free Malaysia Today This is not Disneyland but Mickey and Minnie Mouse are welcoming students to school! Image from Says

Ramlah Othman noted how response from parents were very encouraging. Rahimah Mohd Noor, a parent to a 10-year-old student noticed how the children were happy, indicating that the school’s effort to reduce nervousness in students paid off.

Sometimes, it’s more than just what they teach you in class…

From Adiwiraku to a resilient practical teacher, passionate teachers would go beyond classes to share their knowledge to their students. Like candles, they would sacrifice themselves for the sake of their students.

That is probably why we celebrate Teacher’s Day annually! Historically, Teacher’s Day was inaugurated in 1994 by UNESCO to focus on the contributions and achievements of teachers, and to highlight teachers’ concerns and priorities regarding education. But did you know that Teacher’s Day is celebrated globally on October 5th? 😮 So why do we celebrate it on May 16th in Malaysia? Basically, that was when the Razak Report was formally endorsed by the Federal Legislative Assembly of the Federation of Malaya. It provided a framework for the education system in post-independent Malaya and, later, Malaysia.

But as they say; everyday should be Teacher’s Day. From the bottom of our hearts, we would like to thank all teachers who are dedicated in teaching us. Happy Teacher’s Day!