Seeing as GE14 is just around the corner, genius Malaysian entrepreneurs grabbed the opportunity to cash in on the election fever. We’re sure you’ve seen politically themed items popping up for sale on the internet, like tudungs, kopiahs, flags, t-shirts, etc. Ka-ching-chong-ding-dong-bing-bong! We found 7 so far that range from the biasa to the bizarre and decided to share it with you guys.

But actually though, think about it… is it wise to wear your political affiliations for the world to see? We’ll be discussing this as well below.

1. This fancy shmancy manicure (or should we say politicure?) 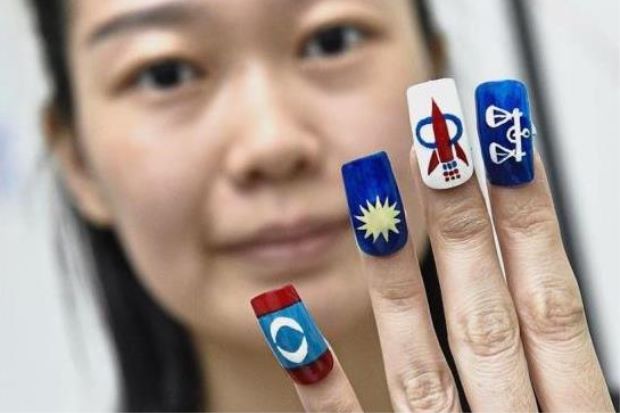 Manicurist Leanne Tan’s nails are ready. Img from The Star

Love getting your nails done? Why not paint your favourite political party’s logo over them? Manicurist Leanne Tan (pic), 32, told The Star that the trend started back in GE13, as she carefully painted a set of artificial nails with different political party logos on a customer.

“I, too, painted signs of political parties on my nails in the last elections. It brings out the mood of people gearing up for the polls.” – Leanne told The Star

For as little as RM7, you can have each nail painted with the party logo of your choice, although the price may increase depending on the designs. Using dark blue, light blue, red, yellow and white nail polish, she painted the logos of Barisan Nasional, MCA, DAP and PKR at her Suave Nail Shop at Symphony Park in Jelutong.

It’s up to you if you wanna show party support on your nails – Katy Perry and Rihanna manicured their support for Obama too – but not during polling day. We’ll get to it later. A beverage stall in Taiping was spotted selling blue, green and orange iced drinks, according the political party colours, Sin Chew Daily reported. They refer to Barisan Nasional, Parti Amanah Negara and PAS respectively, but for the benefit of the uninitiated, the vendor also pasted party logos onto their corresponding clear containers. 😆

Not being biased or whatever, but the blue BN drink looks a lot like detergent, yuck! Img from Wanny Jibril on FB

Political t-shirts are so last millennium… it’s time to show it on the tudung! You can buy PPBM, PKR, BN, PAS, Amanah, DAP, Puteri Umno, Umno, and Pakatan Harapan tudungs from Chenta Watie Scarf and De’Suria Collection on Facebook. And if you’re a bit shy to show who you support, Chenta has a ‘Undi Saya Rahsia’ version with all party logos on it due to popular demand! 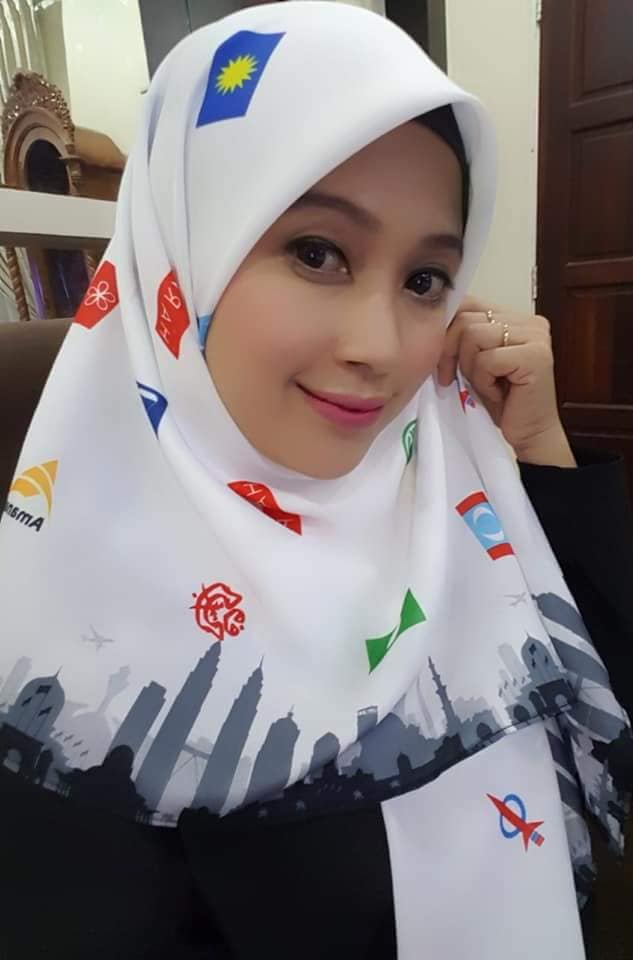 Chenta’s Bawal Satin tudungs are selling for RM59, while Bawal Crepes go for RM39. Meanwhile De’Suria showed customers that their headscarves can be used by both women and men, depending on the way you wear it. Men can tie it like a bandana around their heads. Their scarves retail for RM35 a piece, but if you buy in bulk, prices can drop to RM20 a piece. Strangely though, their PAS scarves are slightly more expensive – RM45 per piece and RM30 in bulk. How the men can wear it. De’Suria Collection

If bandanas are not your thing, men can opt for the subtler kopiah (aka skullcaps). An e-shop, located at @by.taiyuddinbakar on Instagram has selling handmade kopiahs knitted in the colours of different political parties since February. For example, the #SahabatDAP kopiah is white with two thin stripes of red and blue, while the #SahabatBN one is dark blue with white stripes. They retail at RM45 a piece.

35-year-old actor Taiyuddin Bakar started the business over a year ago, and initially catered for football fans with kopiahs for different states in Malaysia.

“As for GE14, I am someone who grew up in a very politically-inclined family. Political ideologies can differentiate people’s way of thinking, but I choose to see the similarities. We may have our small quarrels here and there. But my dream is to see all the people, wearing the different kopiahs, praying together in one masjid. Or maybe even spotting them in one saf (row in place of worship).” – Taiyuddin told The Star Image from by.taiyuddinbakar on Insta

4. These Najib and Khairy cupcakes You thought you’d seen it all, but you ain’t seen nothing till you’ve seen these cupcakes. Carousell user Nurfazlyana Shahira bt Mohd Rosli partnered with bakers to sell politician inspired cupcakes on her platform, fazly_ana, in January. So far she has only two figures, Najib Razak and Khairy Jamaluddin cupcakes, selling for RM29.90 (9 pieces) or RM35 (12 pieces). The Najib cupcakes are jackfruit colada and the KJ ones chocolate.

“Cupcakes are one of the desserts that have no boundaries when it comes to creativity. Creating a series of cupcakes inspired by political figures such as our Prime Minister and our Youth and Sports Minister help bring more attention to our political scene and the potential of Malaysia’s culinary creativity. I hope that Malaysians will enjoy the richness of our politics, just like our cupcakes.” – Nurfazlyana, quoted in ohsem.me

However if you’re more of a lychee lover, try the La Vida cupcakes, inspired by the flamboyant and very pink Dr. Vida. meow.

NAH, BACA:
4 possible outcomes if the US petition for Anwar succeeds Ok we know we said political t-shirts are so passe, but we found one that’s worth putting into this list simply because of the product description. MD Textile is selling a t-shirt with the face of a newcomer in the political scene, ex-beauty queen Jo-Anna Sue Henley Rampas.

If you’re not very familiar with Sabahan Jo-Anna, she is the 2007 Unduk Ngadau (Harvest Queen) winner, a high-profile beauty pageant in Sabah. She is contesting in Kiulu against BN incumbent Datuk Joniston Bangkuai. You can read our article about her and a few other unlikely GE14 candidates.

The shop has a bunch of other GE14 themed t-shirts and iron on stickers. So we came across Mudah and Lelong selling bamboo sticks for RM2. But yeah political parties use them to put up flags during the campaigning period. Rather than selling them to the general public, these are sold to political parties.

Election season spells good business for distributors and sellers, particularly for generic election paraphernalia, stuff like flags, banners, t-shirts, caps, button badges, stickers, and so on, to distribute to voters. But it’s been quite quiet so far according to vendors, maybe because the issue of the Pakatan Harapan coalition not being allowed to use a single logo. This 7 May, Chef Isadora Chai of Bistro à Table is bringing back her special GE13 Disgustation menu. For RM180++ diners can enjoy this Malaysian French 8-course meal with tongue in cheek dish names:

Lots of businesses are gonna make big cha-ching during GE14 Malay Mail reported that the Election Commission set aside a budget of RM500 million for GE14, this includes things like rental costs, equipment procurement and allowances. In the last elections they spent RM400 million.

Lots of businesses, especially printers, t-shirt, cap, umbrella, flag manufacturers, all these people will usually receive big orders from political parties to print their respective logos for the campaigning period to be given out to voters. Malay Mail made a chart (above) of all the businesses that are expected see it rain this elections.

“I’ve already received many orders for party flags. Competition between parties will be more intense in GE14, so I expect a bigger demand for my products this time around.” – owner of a business based in Kepong, The Star

Komtar assemblyman Teh Lai Heng said he would be printing about 10,000 report cards, recycled bags and T-shirts for his team members and other personalised items if he is chosen to defend his seat. Billboards and banners are expected to cost about RM50,000. State seat candidates will also have to pay RM10,000 for a package of standard items for the party, said Teh, whose funds usually come from supporters and public donations.

But like we mentioned earlier, is it wise to show who you support? According to Section 26(1) of the Election Offences Act 1954, no persons are allowed to wear “any form or type of clothing, head covering, ornament, rosette, water bottle or umbrella on which the name of a candidate or the name, emblem or symbol of any political party is printed or imprinted” 50 metres away from polling station.

So no tudungs or Jo-Anna t-shirts k gais, not even the Undi Saya Rahsia tudung! The kopiahs are at least more discreet. But we doubt anyone would arrest you for eating Najib cupcakes or drinking the PAS green beverage at the polling station, so knock yourself out.

A neutral approach to dressing is probably your best bet, plain clothing, with minimal or no prints is a safe choice, wrote AskLegal. Maybe just wear all black….like you’re mourning the death of democracy. In fact, do remember to dress decently because if you’re not wearing proper outfits, EC officials have the right to deny entry to you. Avoid singlets, slippers, shorts or miniskirts. To ensure everything goes smoothly, wear long pants and toe-covered shoes.

Lastly and unfortunately, no manicures, or should we say politicures. And not just because it shows party support, but the EC will have difficulty applying the indelible ink on your nails. They’re not gonna be providing nail polish remover at the stations either. However, according to this 2008 statement by the EC, henna is allowed because it’s red and a different colour from the indelible ink.

To know more about the Do’s and Don’ts, click here. Happy voting!