As we got into work on Monday, we were disheartened to hear about the hostages being held in a Lindt Cafe on Martin Place in Sydney. Not so much because it was an unexpected event, but because violence and terror reared its ugly head again, as though trying to completely destroy the human spirit in the remaining days of 2014 after what could be the most tragic year of our lives.

Throughout the day, our newsfeed were filled with heartfelt wishes and new updates about the incident, and it wasn’t till much, much later when it all ended, where the gunman and two unfortunate victims died and some others ran free. Although not everyone made it alive, we were thankful that it was all finally over.

As we reflect with equal parts relief and sadness, we felt the need to share these key lessons we all can take away from the horror Sydney went through.

1. To the media, including ourselves: We can choose responsibility over traffic

While arguable by Australians who have direct access to TV broadcasts and every single minute detail, what we folks across the sea realised was that the Australian media (well, most of ’em) were pretty respectful and responsible by restraining information and being careful with the words they chose. According to a piece by Amanda Meade for The Guardian, police asked for the identities of the gunman and hostages to be suppressed and the chilling videos made by the hostages and uploaded onto YouTube not to be shown.

Amanda also writes that the identity of the gunman was kept from the public until police media gave the go-ahead after midnight. Even then, some outlets chose not to air graphic footage of a victim receiving CPR. She adds that there was also a horrific vision of a woman being shot which never got broadcasted. The two victims who lost their lives in the siege. Photo from theguardian.com

There was also the case where a network’s newsroom, which was positioned directly across the Lindt cafe, was evacuated early on in the siege. However, two staff were allowed back in and shared vantage point with a sniper. Even with that, there was much they didn’t share with their viewers.

In the same article, Nine, another network, adds that all the networks provided good coverage. News director Darren Wick said that several stations had conversations with two hostages on separate occasion, but even so, everyone deferred to the police negotiators and did not broadcast the contents of their conversations.

“This is not, nor should it ever be, a time for boasting about who was first, and who had what. Australians lost their lives. It’s a terrible incident, whichever way we look at it. (…) Everyone realised that there were lives at stake here. And that’s all that mattered.” – Nine news director Darren Wick

But on the flip side, The Daily Telegraph, known for being tabloidy and sensational, pissed the hell out of their readers with this ‘special edition’ at 2pm: The headlines, ‘IS takes 13 hostages in city cafe siege’ and ‘Death cult CBD attack’, linked the hostage situation to the Islamic State even before any form of confirmation by officials and instructions for the press to report responsibly. Their readers reacted as such: On the same day, many other publications referred to the situation as ‘terrorism’/’terrorist’ without linking the IS, to which several personal friends gave their two thumbs up on Facebook.

However, criticisms quickly came running in as more details about the gunman were revealed.  Identified as Man Haron Monis, it turns out that he wasn’t linked to the IS and was more of a mentally-unstable person with a sick history of violence.

Russell Brand’s webshow, Trews, shared a 9-minute video on his analysis of the situation, calling out the press and the government for crappy handling of the event. “By us labelling him a terrorist as opposed to a dangerous mentally ill – not that all mentally ill people are dangerous, I’m mentally ill – and by allowing him to set the agenda of ‘I’m doing this on behalf of Islam’, it gives a certain grandeur to nihilistic and violent actions but what’s more interesting that the actions of a mentally ill person is the response of the political establishment,” he says in the video.

2. To social media users: Your posts CAN affect the situation

According to Jane Wardell for Reuters, traditional media refused to broadcast or print details of the phone calls made by the hostages, which then caused Monis to use his hostages’ Facebook and YouTube accounts instead. He forced his hostages to use their own accounts to issue out his demand to speak to the PM and to claim that he had planted bombs around the city.

While some people found the need to ‘like’ and ‘share’ these updates, others felt the need to report these posts and refused to share them to their own friends. Jane adds that these messages never went viral, which explains how we only saw it on… Umm… Yet another tabloid paper, The Telegraph (UK).

If there’s one thing we know, it’s SO easy for a post to spread. Think Kiki’s rise to fame. Think the fake news about MH370’s recovery in the ocean. Although two very different scenarios from the siege, they both shared the same lesson – shit goes viral, fast. Not everyone is as self-controlled as to think, “Should I share this? What good will sharing this do?” So seeing this form of social media responsibility in the time of panic and unquenchable thirst for information is definitely something to behold.

NAH, BACA:
OMG... there's an old Malay community in South Africa?! How are they different from us?

On the other hand, something else did go viral and that was the amazing #illridewithyou campaign. It started with this Facebook posting: Then this other person took it to the next level, starting a whole new campaign on Twitter which trended in a short span of time: 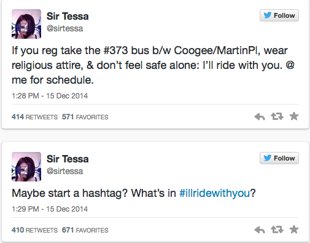 #illridewithyou showed the solidarity between Australians and the world as they extended their care for Muslims on the public commute who were worried for their safety. Although heartwarming, it too got a bit of backlash such as one from Queensland MP George Christensen, who said that it portrayed Australians as violent people who would hurt the Muslim community. He instead said that the focus should’ve been on the heroic efforts of the two victims in the siege.

Shallow campaign or not, one thing’s for sure – not only did it trend worldwide, it even extended to the offline world where people stood up to defend Muslims who were bullied. Check out more reports in this news.com.au article.

3. To the general public: Be positive, but don’t be an a**hole

While Sydneysiders evacuated the area (even causing Uber to charge riders with a fare that was out of this world, although it was an automated system which was then rectified), there were those who stood their ground, unmoved. News.com.au reported that Jonathan Thomsen, a nearby busker, was playing his ukelele singing to “Summertime and the living is easy” during the ongoing sitch.

“It’s still summertime, it’s still a beautiful day and that’s why I’m playing this song. I’m actually really annoyed at these stupid terrorists*. It’s a beautiful day. Get out of my beautiful day is basically my message.” – Jonathan Thomsen to news.com.au Jonathan with his ukelele. Photo from news.com.au

The article by Anthony Sharwood added that Sydneysiders were saying that the gunman might’ve given them momentary surges of fear and horror, but would never steal what they held dearest – the freedom to religious, political and personal choices. He identified Australians as easygoing and fantastically easy to get along with. “Belligerence and bullying has never been the Australian way. As proof, we’ve never started a war,” he writes.

Like the saying goes, “united we stand”. The violent may try to cause disharmony, but it’s also up to the people to stand together, strong and defensive against these efforts.

But on a disappointing note, there were people (tourists?) taking selfies at the scene, uploading them to their own accounts with big smiles and all. As tasteless as the MH370 Halloween costumes, this instantly generated anger from the public. The Daily Mail was one of the first to name and shame. Seriously tho, it’s as tasteless as taking a group photo with thumbs up at a funeral. Not cool. 4. To the gomen (or anyone, really): Don’t blame everything on religion

Perhaps what was most respectable was Aussie PM Tony Abbott’s refusal to blame Islam for the gunman’s act. In an interview with Chris Uhlmann of ABC AM, he said that terrorists claim to act in the name of their God and religion, but there isn’t a serious religious leader defending this. Screencap of the news report on theguardian.com

He adds that the ISIL death cult in the Middle East has been roundly condemned by all of the leading Sunni scholars, and even added Najib’s quote that the ISIL movement is against their God, against Islam and our common humanity.

“We don’t blame the pope for the IRA and we don’t blame the Catholics living next door for the folly and madness of some people who may claim Christian motivations.” – Aussie PM Tony Abbott

Truth be told, PM or not, it’s nice to have someone *not* bring religion into things. In a time where Islamophobia is increasingly growing, our fellow moderate Muslim friends are bearing the brunt of the radical, unacceptable and extremely horrific violence in the Middle East. If you looked through comments on social media, news sites and blogs, people are condemning the Muslim population and asking them to GTFO of Australia. In fact, it’s not just Australia – it’s happening all around the world. Why is there even a need for this?

After the shitstorm we’ve all been through, it’s sad to think that this year couldn’t get any more tragic. And how heartbreaking is it that even as we write this, we hear news about the Taliban school massacre which killed 141 people (mostly children) AND the retaliation air strike which killed 50+ militants. And just today, the stabbing of children in Cairns, also in Australia.

While most of us can’t wait to wrap 2014 up and store it deep into our mental store room, let’s make the most out of what we’ve been through, reflecting back to see how we can better ourselves. Here’s hoping that if an incident that echoes the siege happens again, we’ll all be able to be a little more courteous and responsible in what we say or do.