So, there has been news of a new type of weed hitting the streets of Malaysia. Word has it that the supply has come right from Mexico itself and is said to be able to leave you breathless with just one touch. And also give you the itch of your life.

Sorry if you thought we were talking about marijuana… It’s just lalang weed. #trollsomemore #ihatecilisos

But waitttt, it haz funny name and it really makes you gatal!

By gatal we mean itchy la. This fella touch you ah, you itchy di. Probably that’s why the locals call it Rumpai Miang Mexico, because miang means feeling in the mood, you know, that kind of mood, and the fella miang so go touch people and make them gatal, which can also mean the same thing as miang, but then the gatal you feel is not miang gatal but itchy gatal so it’s actually a play on the wor….ah give up lah so hard to explain.

This weed is better known worldwide by names such as Santa Maria Feverfew, Carrot Weed, Congress Grass, and some other stuff. Yup, this weed is a problem all over the world. From what used to be its hometown of Mexico, Central America and South America, it has now spread all over the world. 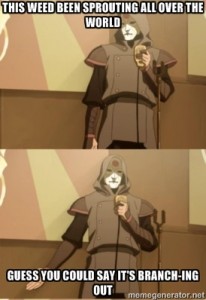 And to add to the already long list of names, here is its scientific name Parthenium hysterophorus. Which is so much easier to remember than Rumpai Miang Mexico or Santa Maria Feverfew. Pharthenium Hystepoporus. That was us trying to type is out without looking at the original spelling. Well, call it whatever you want la but the thing is this weed has arrived here at our doorstep. ….Uninvited….. How root!….. 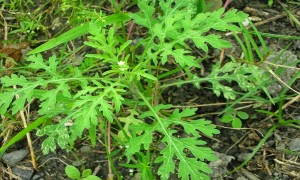 And unlike other types of weeds that just invade gardens or alter your current state of mind, this one actually actually harms you. Physically. No joke, seriously. This weed is potent enough to give you respiratory problems and rashes that can last for months when in close proximity or upon contact and leave scars. Scars wei, don’t play-play. Whoever told you that weed is harmless probably lied, this stuff is pretty toxic. Talk about making your skin crawl: 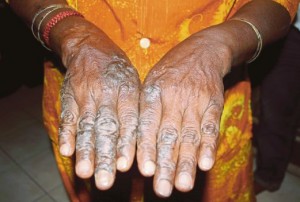 Rashes caused by that very miang lalang. Photo by hmetro.com.my

More of its scary effects on people in India. Click image for the research piece. Photo from ijdvl.com

Got lalang then cabut la. Complain what sumore?

It’s just not that easy with this one. It’s one really tahan lasak kind of plant. Some attempts to spray it with herbicide have only ended with it springing back up a few days later. No weed killer for this killer weed. It competes with other plants for nutrients while at the same time releasing chemicals that damage other plants. Did we also mention that it spreads like nobody’s business?

Yea, so what we have is basically a chemically resistant weed that grows quickly, steals food from and damages other plants. If this weed were a person, it would be a jerk, a jerk that can make copies of himself and poison everyone around him.  More like super villain la actually.

And maybe some of you are going “Nah this is a problem for the farmers and petani and Jabatan Flora dan Fauna and all. Not my problem.” We assure you it is. It’s already been confirmed to have hit several states and while it may or may not be a problem all over Malaysia, it is good to be prepared anyway. 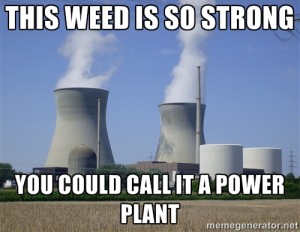 Yes I was asking the brown cow. Because btw it can kill livestock too. Anyhoo, doctors advise the public to avoid this abomination of a plant at all costs. Just leaf it alone okay (I think I’m just trying a bit too hard at this point). Don’t go kacau-kacau the thing. If you’re a hypersensitive individual (someone who gets allergic reactions easily, not someone who is easily offended) it is recommended that you wear long-sleeved outfits when leaving your home.

Also, because it looks a lot like the Ulam Raja (a plant used in Malay cooking), be on alert and don’t simply pluck and cook – look out for its identifying elements. In our humble opinion, it looks like a cross between a marijuana plant and a papaya leaf, but here’s what State Agriculture Department director Zabidi Dun said: If cannot do anything then abohow???

Dun worry brudder, all hope is not lost! The Department of Agriculture (DoA) has formed a special task force to in other words ‘seek and destroy’ these sons of itches and while this task force leads the battle on the front lines, a certain Professor Dr Abdul Shukor Juraimi, dean of agriculture at Universiti Putra Malaysia is putting pressure on the flanks by working on biological pest control methods such as fungal diseases to fight the blight since herbicide would be ineffective in the long run.So it’s probably for the best that we stay away and let the experts deal with this. 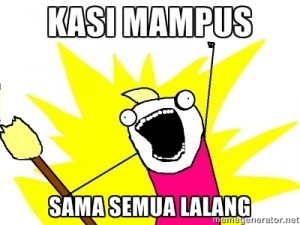 What we assume the DoA is saying.