Fyi, when we went to both Vietnam and Thailand for our matches there were no recorded instances of abuse against us so kudos to them for that. It’s a shame that this happened.

“Wait, if we lost the game already why got another game wan?”

Well  the thing about the AFF Suzuki Cup is that the final match is held over 2 games (known as a two-legged tie) with the aggregate score determining the winner.  Each game is held once in both countries that made it to the final, with this edition’s final involving Malaysia and Thailand. The first game was held in Bangkok and thus the second game will be held here in Malaysia, and judging by the response from the first leg, you can generally expect lots of Thai people to be crossing the border (legally of course).

So as we prepare to host what is probably the final match for the equivalent of a world cup in South East Asia (since none of us have ever even gotten close to the actual World Cup) here are some things we would probably like to avoid before, during, and after the match.

Malaysians are great at this la. Growing up among so many cultures, we’ve been primed from young to create insults for other races, sometimes even in their own language. Let’s be honest, some of you are already thinking of Thai insults like sawadicrap and  kapun-kap massage-kap Honda-kap. We suppose in good fun these things happen but we probably should be looking to draw the line between joke and insults because they’re just as human as we are. And really, you do not want to get into a war of words with a person whose country’s capital’s full name is too long to even tweet (Krung Thep Mahanakhon Amon Rattanakosin Mahinthara Ayuthaya Mahadilok Phop Noppharat Ratchathani Burirom Udomratchaniwet Mahasathan Amon Piman Awatan Sathit Sakkathattiya Witsanukam Prasit a.k.a. Bangkok). They’ve had practice saying stuff like these their whole lives. You no chance mannnn.

(Bangkok’s full name. There’s a play button here, even if you don’t see it.) 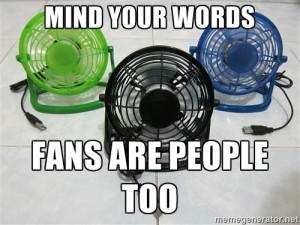 UPDATE: Our CILISOS commentors agreed with us so much that they gave us more suggestions on what NOT to say to our Thai friends!

To our commentors, we not making fun of you, we really laikkkkk your comments. Dun angry k? 😀

On a side note, commentators can take note of this too. Don’t eat chicken thigh on set, if your co-host has a nice tie on, don’t comment on it, and if you have a colleague named Tom, don’t ask him if he would want some yam. This paragraph is totally serious in nature. Really.

If the score was tied that is.

2. To Authorities: Please control us!

Just this once, the authorities need to keep us under control. Football games are known for their emotions and when tensions are high these emotions can translate into actions. Violent actions (sorry la same link). Last week’s game with Vietnam does show a very bad side of us but it also showed that the authorities need to step up their game (pun not intended, serious) in when it comes to crowd control. Because while the game is gonna be pretty big, lives still come first. And if you’re a Thai fan reading this, don’t worry, even our Youth and Sports Minister is working hard on keeping everyone safe. 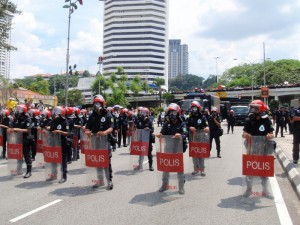 Hopefully the Federal Reserve Unit will be there to keep things clean and in order. Image taken from Wikipedia.

One other thing we could keep a look out for is stadium overcrowding. While this has never really been a huge problem in Malaysia, it has happened and for a game of this magnitude we really would want to take all precautions to avoid this ever becoming an issue because even some of the biggest nations in football have had problems dealing with it. Ever heard of the Hillsborough disaster?

3. To Players: Please kick, not punch.

Football is a sport that shows the potential of the human race to function normally even if we were to one day evolve to a state of having no arms. Some professional footballers are so good that they can even juggle chewing gum with their feet. So, in a sport that avoids using the hands so much (aside from the goalkeeper) that there is even a foul for it, there really is no need to pull unnecessary punches (pun intended?) on the pitch.

Seriously though, with us being 2 goals down already, the last thing we need is someone getting sent off for hitting another player, be it out of frustration or for kicks….

4. To Referee and Linesmen: Just….try your best k?

Obviously we could just hope for an error free game but in truth refereeing a football match, especially a final match, is never easy. Sh*t happens and we should probably admit that wrongs can be made. Even FIFA has acknowledged that these things happen.

Wrong decisions by referees are now clearer than ever. With instant replays the crowd can immediately see what happened in close up but not yet available to be used by referees. While technological advances like goal-line technology have been introduced during the FIFA World Cup and in some football leagues, it has yet to reach many parts of the world including Malaysia and referees will just have to make do for now.

We’re not saying this in a way that gives free reign to the ref to make as many mistakes as he wants but to say that refereeing decisions are a part of football.  It may be right, it may be wrong, we can grumble and argue about it but at the end of the day the decision stays, even controversial decisions like these.

*Disclaimer: While we at CILISOS want to be all civilised during the match, we will probably be caught screaming ‘referee kayu!’ as often as the next person. Emotions mah.

5. To Hooligans: Violence doesn’t show our strength, but our weakness.

This just has to be said even if we’ve been hearing it over and over. Don’t go beating up our opponents (yes yes, same link again) if things don’t look too good for us. Think about it, who are you beating them up for? The team? The country? Khairy? Everyone’s against it so why would you go and do something that would not only ruin the mood of the game but piss everyone off in the process?

Btw, nine people have already been arrested for the events that took place during the other game so yea, you can be caught. 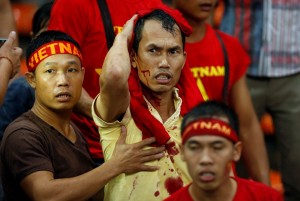 This really, really shouldn’t be what we’re remembered for. Image from Thanh Nien News.

Honestly, if we’re on the losing side it’s actually an opportunity to bounce back stronger, both as a team and a nation. Take for example how the nation responded when Chong Wei lost in the Olympic final. We actually supported him when he needed it the most. #hopeinmalaysiarestored 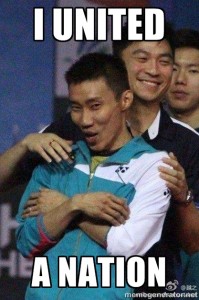 But waittttt, we’re not saying we’re gonna lose. We’re not giving up okay! Let us tell you why!

6. To everyone in Malaysia: Don’t give up hope! We can still win this! 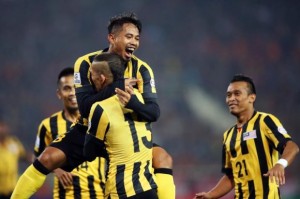 We beat the odds that time! Who could have expected us to come back that well? Now we couldn’t find anything on how the players are currently feeling but here are a few tweets of Malaysians who have not given up.

Translation: Together we rise…fight for the final game Harimau Malaya…

Translation: Gooaaal! That would be the screams that would be heard at this Saturday’s final)

Like that last one says, kalah tidak bermakna tewas. Losing does not mean defeat. That is beautiful isn’t it. It’s not just the players who would be out there. We’re going there as a nation, as the 12th man. So chin-up Malaysia, the fight isn’t over yet. #lawantetaplawan