Few Malaysians would argue that it’s been a horrible year for our country. With the two MH tragedies, the haze, the FMFA deaths and shutdown and dengue, 2014 has been a year of hard lessons – but it seems that we’ve learnt a thing or two. The most obvious comparison is between the reactions to the tragic losses of MH370 and MH17, so let’s take a look at how we’ve grown.

When MH370 happened in March, it was an unprecedented event – the last commercial plane to go missing was in the 1950s, and it has only 67 passengers at a time when flying was a lot more risky than it is now. Given the unprecedented nature of this occurrence, contrasted with Malaysia’s history of censorship and control policies, it was understandable that our government and related agencies were unsure of what information to release.

When MH370 disappeared around 2:40am, the first tweet from MAS was some 6 hours later, and the first from Prime Minister Najib was 3 hours after that.

MAS’s first tweet after MH370 was a rather cold press release at 8am, 6 hours after the flight first disappeared

Assumedly, the various parties were scrambling to get their stories in sync before confronting the media, which caused outcries about conspiracies and information withholding.The press conference was a full 179 HOURS LATER (there’s actually a counter on top of the video).

With each bit of information that got delayed, the complicated web got even more complicated, resulting in a series of delayed information releases that dropped like thunder in the international community – and our country has been struggling to restore its credibility ever since. BTW you can view a full timeline here.

When MH17 happened last Friday,  the first tweet from MAS came within minutes, and was immediately retweeted as the first official statement about the disappearance.

Malaysia Airlines has lost contact of MH17 from Amsterdam. The last known position was over Ukrainian airspace. More details to follow.

The Prime Minister’s tweet came minutes after, and an emergency press conference was organized at KLIA barely 4 hours later. 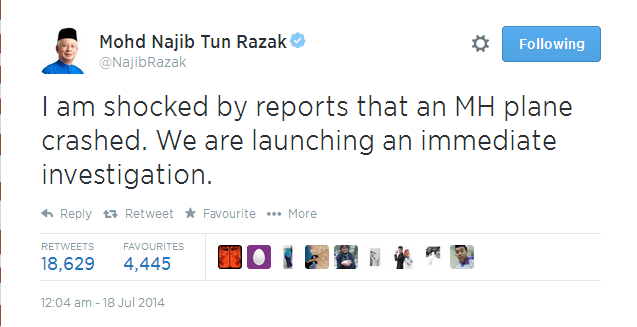 The first tweet from the PM was firm, swift and to the point.

As far as emergency response to a crisis goes, for us here at CILISOS at least, we applaud MAS and our Prime Minister on lessons well learnt. We feel that if there’s any silver lining to the tragedies we have faced in 2014, it’s that through this baptism of fire, we have learnt the benefits of transparency. Hopefully lesson will be adopted across more areas.

2.    To take time to consider before spreading information

If there’s one thing that history has taught us, it is that in the absence of information, people make up their own. In the wake of MH370, the uncertainty itself generated enough conspiracy theories to spur its own Wikipedia entry. Many online spammers took the opportunity to create linkbait-y articles, which people then forwarded to their friends and subsequently infected them with viruses and such 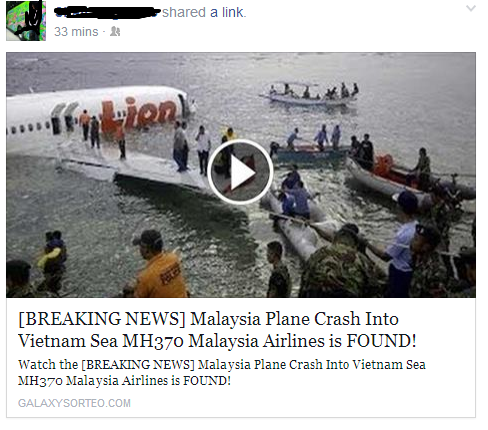 There’s a special place in hell for asswipes like this who take a horrible situation and make it worse just to benefit themselves. Unfortunately, just as many people were forwarding ‘scoop’ information before it was verified, some even causing investigations.

And an equal number of people just hung on to anything they could. Aiyo… image from the huffingtonpost.co.uk

Right from when the news started appearing, we saw Tweets and FB posts urging Malaysians to think before they shared info. Perhaps learning from how misinformation seems to spread 5 times faster than real info, Malaysians shared responsibly 🙂 In the light of MH370, the media were also whipped into a frenzy, often joining the mob to point fingers. Sometimes, alot of the theories came at the expense of still mourning victims. For instance, when the Malaysian Government made a statement saying that the plane was officially assumed crashed, many keyboard warriors took it to themselves (including our dear editor) to ask people to wake up and smell the bodies. Unfortunately, some of the people on Facebook really did know someone on board, and sometimes, keyboard warriors make statements that are often insensitive to those who just need closure in any form.

Below is an excerpt of a VERY long FB thread between such a keyboard warrior, and an actual relative of a victim, who we can only assume now was typing her comments with wet eyes. Of course, some of our Ministers joined in, blaming the anger of victims on, of all things… our local Chinese papers…

Zahid pins the blame on Chinese media for causing families of Chinese passengers onboard MAS flight MH370 to be upset with the Malaysian government. – The Malaysian Insider pic, March 26, 2014

As early as an hour after the crash, there was a document going around claiming to be a passenger manifest list. However, the minute it started appearing, Malaysian Netizens discouraged each from using it, to avoid adding to the confusion. 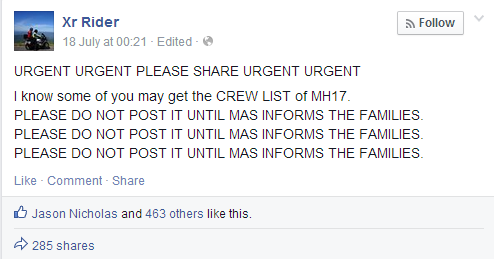 Even when grotesque images of bodies and such started circulating on Facebook, the spread was much less rampant than expected (I personally didn’t see any, although some of the CILISOS staff did see a few isolated links). This was partially due to people discouraging and refusing to share them on social media. When MH370 went down, the lack of information caused a flurry of bad faith. Our Netizens were quick to jump – and made many conclusions that usually targeted the usual suspects – the government, and the government-backed company. While some were warranted, alot of it was just fingers looking for somewhere to point.

Of course, when you don’t know better and you’re angry and people are slow to respond, who can blame them?

Of course when MH17 happened, we were afraid history would like…happen again, which is why we published this article, to tell everyone that MAS was not to blame. However, it seems our fears were largely unfounded. 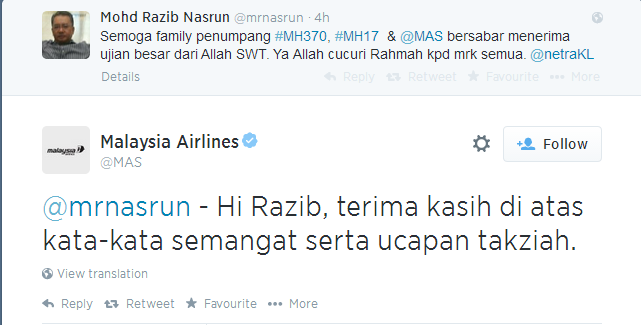 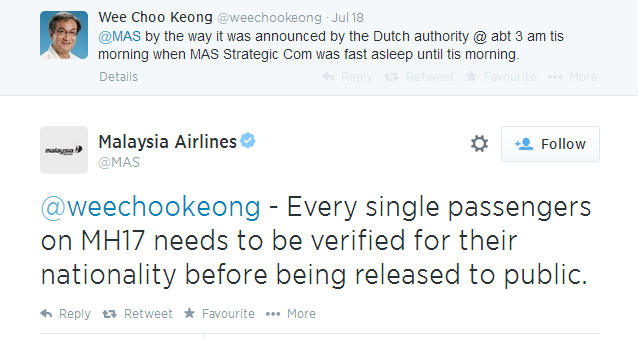 But it was touching to see normal civilians come to the rescue of this sudden underdog juggernaut. We’re sure part of this is the sheer sympathy we have for an organization that has effectively been struck by lightning twice in a year.

Even the media got into the act – the Malay Mail Online, which is known for being one of the more openly critical publications recently published an opinion column expressing the same opinion.

“The rest from both sides of the political divide thought it was important that everyone set aside their differences and stand behind Prime Minister Najib Razak instead. And we did. Najib’s response was surprisingly swift.” – Zurairi AR, The Malay Mail Online.

The Sun Daily, another known hard-hitting news source instead covered reactions of netizens who were united in their support for MAS.

And it didn’t stop there either. Regular Malaysians even jumped to bring a message of peace to the people responsible for the missile launch.

And the villagers of Donetsk, where MH17 crashed even took a timeout of their war to make their own memorial.

If there’s a main lesson in the madness that is 2014, perhaps this is it – that regardless of race, religion, beliefs, or even location… a little bit of compassion and understanding can go a long way.