The past 2 weeks have been…interesting to say the least. After the huge discussion about the lack of Malay representation at BERSIH 4.0 (where we even attempted to find out why), the country was greeted with the recently concluded Himpunan Rakyat Bersatu (better known as red shirt rally). And if you take into account the Low Yat brawl which was turned racial even if it started with a handphone, as much as we rather not say it, all these things seem to point to one thing:- That the issue of race is still looks like a very big thing in Malaysia la.

And thus we believe this article is timely, because it came from a specific meeting between academicians and politicans to discuss the issue of race politics in Malaysia. And what they said may surprise you, because some things did actually surprise us.

So about a month ago we went for a meeting which had people from UMNO, DAP, PAS, PKR, and a few other organisations. And believe it or not, the meeting didn’t end up like this.

Nah we kid, meetings between the gomen and opposition are civil la….most of the time. :PPPPPP

Anyway, back to that meeting we went for. It was organised by the GMOMF (headed by Dato’ Saifuddin Abdullah, whom we interviewed for a previous article recently). It was basically a roundtable discussion on the topic of ‘The Politics of Race in Malaysia’.

So what you have is gomen people, opposition people, and academicians all discussing race politics in our country. Sounds like a pretty cool topic of discussion right? Especially when an UMNO guy is the one chairing the whole meeting? (UMNO guy being Dato’ Saifuddin himself).

And believe us when we say that what was said during this meeting actually made a lot of sense! Like after the meeting, we basically went back feeling like we could see Malaysia in a whole new light! 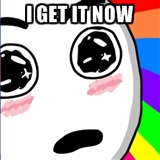 Like rainbow light. That has illuminated the dark ignorance of our souls.

That’s basically what we’re gonna talk about here la. So here are some of the most interesting points when gomen, opposition and academicians discuss the topic of racial politics.

1. The meaning of the word ‘Bumiputera’ is debatable

This was said by former UMNO Supreme Council member and the moderator for the session, Dato’ Saifuddin Abdullah. Yes, an UMNO guy said this. So according to Dato’ Saifuddin, the National Unity Consultative Council (a council set up by our PM in 2013 to deal with unity issues 😯 ), which he is a part of, tried to define what ‘bumiputera’ actually meant.

“We were discussing at great length but without any conclusion in regards to the term bumiputera.” – Dato’ Saifuddin

He then goes on to paint how complex the word bumiputera can be because there are people who want to be identified as bumiputera, & people among the bumiputeras themselves who would feel that they are treated less bumiputera-ly than other bumiputeras.

But basically his point was this: People actually talk about the races they identify with. Something that we will talk about more as we go along with this article.

2. Malaysia isn’t just about Malay, Chinese and Indian ya?

So this point actually comes from a presentation by Serdang MP, Ong Kian Ming. Malaysia has been slowly reducing the number of race categories in Malaysia. And this one haven’t include Sabah & Sarawak cos not Malaysia yet. From page 24 of document on csde.washington.edu.

Ong Kian Ming quotes a research paper titled “The Meaning and Measurement of Ethnicity in Malaysia: An Analysis of Census Classifications” by Charles Hirschman. It’s a long piece of work but basically it shows how the classification of race in Malaysia has evolved since 1871.

Hirschman research demonstrated how the English documented the races in Malaya all the way until 1957 when we Merdeka. In the document, you can see how they kept adding different subcategories to the races until it looked something like this>>>

But as the years passed, with Sabah and Sarawak joining us, you would expect this list to expand right? But no, as time passed, Malaysia’s race categories simplified. We managed to find an update of the research paper by Charles Hirschman (which Ong Kian Ming also quotes) that mentions 1991 as the turning point.

In time, while Malaysia continued to list down these various ethnic groups. Malaysia’s race census started to look more like below. With a few more categories for Sabah & Sarawak. Taken from psu.um.edu.my.

Why? Sadly the research does not conclude with a reason behind these changes. At least we couldn’t tell from the research paper la. But Ong Kian Ming did say this at the meeting.

“From what I understand, Tun Mahathir preferred a very simplistic understanding of racial & religious categories in Malaysia.” – Ong Kian Ming

3. According to survey, race politics may not work anymore…. but religion maybe?

Remember the time when former DPM Tan Sri Muhiyiddin Yassin once said something along the lines that he is ‘Malay first, Malaysian second’ and everyone lost their minds? Well turns out he may not have spoken on behalf of Malaysians at all.

Ibrahim Suffian of Merdeka Center (Malaysia’s first polling organisation) presented some findings from a project between them and another organisation that showed some pretty fascinating results. Here are some of the findings from their research.

But from Merdeka Center’s results, we could possibly say this about Malaysia. But that is only part of their research la. Ibrahim Suffian actually talked a lot more about the attitudes of Malaysians towards race and politics in general, and we don’t think we’re able to cover every topic that they researched. Don’t worry if you want to read sumore though, cos The Malaysian Insider actually published more of their research findings recently.

In fact, we at CILISOS also intend to get a copy of the research & look through the findings on our own. Hopefully even write an article about it so yea, akan datang.  😉

4. But we can’t just get rid of racial identities either

But despite Merdeka Center talking about how race politics may not necessarily work in Malaysia, Dr Mujahid Yusof Rawa of PAS (or GHB) said that race and religion are not things that we can just do away with. He uses article 153 and Islam as the official religion of the country to illustrate that these things are embedded into Malaysia’s laws.

“The very essence of this country, how it was built, is actually based on multi-ethnicity and multi-religiosity. And that is why it’s all written in the Federal Constitution.” – Dr. Mujahid Yusof Rawa

He also said that he will always be a Muslim, a Malay, and a Rawa. But his job as a politician is to put those things into perspective.

“You can identify yourself based on your racial background, but you do not turn that into a political struggle.” – Dr. Mujahid Yusof Rawa *Hint hint* “Hisham Keris” by Source. Licensed under Fair use via Wikipedia.

In addition to that, he believed that the most challenging element plaguing the nation is, in fact, racism. But he has hopes that it will all change one day.

“I hope that the issues surrounding this country will be dealt with not through the eyes of racism and ethnicity but dealt through good governance and performance.” – Dr. Mujahid Yusof Rawa

He says race issues must be dealt together with political and parliamentary reform for the sake of the future generations, and these are what will eventually move us away from race politics.

“I don’t think the next generation would want to identify themselves anymore with racial background so we have to prepare that now.” – Dr. Mujahid Yusof Rawa

5. There will always be people who want race politics

So far got representative from UMNO, DAP, & PAS. Now we go to PKR. More specifically, Pandan MP, Rafizi Ramli. Now on his part, he believes that there will always be people who want race to be a part of politics.

Rafizi went on to talk about how race politics exist in even the most developed countries. Race politics has become increasingly dominant in Europe (e.g. here & here) and he believes that this is due to immigration. He also believes that race politics in Malaysia have been largely economic in nature, but immigration may take its place in the future as more and more migrants make their way to Malaysia. Thus, Rafizi also echoed Dr Mujahid Yusof Rawa’s opinion that we cannot get rid of race politics. BUT he says we can do this instead. “What a society can do is to make sure it remains a fringe, it remains the most extreme of views, and that we push these extreme views to where it belongs and get more people to the middle ground.” – Rafizi Ramli

He describes the middle ground as the so-called ‘non racial’ perspective of an issue or event. And he said that this is easier now because people are able to understand that some race-based mindsets need to be reexamined.

However, he states that there will always be groups who will jump at every opportunity to latch on to racial incidents (e.g. Lowyat incident), but the good thing is, it’s getting harder and harder to make a big fuss out them.

“More and more people understand that race in out society has often been used as a bogeyman to eclipse the real problems.” – Rafizi Ramli

And thus, despite all the attempts at race-politicking, he believes Malaysia has managed itself well in the last 5 years. His only cause for concern is whether or not we’re satisfied with the pace we’re going at. If we’re not, he says this.

“I don’t think we can expedite (hasten) the process without changing the government.” – Rafizi Ramli But maybe we can start with the little things?

All that we’ve just said may sound a bit overwhelming la, we get it. Cos after we heard all these things, we were also like “Okay, now what?” you know? So many complex explanations about race but what can the ordinary Malaysian do?

At the end of the whole thing, we managed to speak with Rafizi Ramli about it. We were expecting some grand answer of how Malaysians should be more active in making policies and what not. But he said this instead.

“Make a friend of a different race.” – Rafizi Ramli

Honestly, we were taken aback by this answer. But we eventually realised, that answer quite good la. It may not be as earth-shaking as we want it to be, but it’s definitely something that every Malaysians can participate in.

And maybe that’s how we can eventually move away from race politics: One friend at a time.