MH370 was a Malaysian tragedy, there is no easier way to put it. It’s difficult to believe that in one night, a plane just disappeared. It’s also hard to believe that countries have been searching for it for over a year (17 months to be exact).

But just last week, search efforts received a massive boost when plane debris washed up on the French island of Réunion.

But what caught our interest in this whole thing was how they determined that the flaperon was part of a Boeing 777, what more MH370 itself. And beyond that, the technology that is being used constantly to determine the location of MH370. So let’s check into the lab where all the detective magic happens…

What did they find? Something known as a flaperon (some flappy thing on the wings of a plane that helps stabilise it). It may be just one tiny piece but not long after that, the deputy prosecutor of Paris said that there is a ‘strong presumption’ that the piece came from MH370. Right after that, our PM has confirmed that it is, in fact, a part of MH370.

How are they all condamnfirm sure this piece is the correct one and not some other random plane? Speaking to the press, the prosecutor named 2 reasons – firstly, he said experts recognised its design to be a Boeing 777 piece. And at this point of time, MH370 is the ONLY missing Boeing 777 in the world.

CNN followed the investigations to aviation forensics lab RTI Forensic Services in Maryland, the US, and spoke to its CEO Joe Reynolds. Every move of the investigators are recorded so that people know it was treated properly and nothing was altered it in any way and the record is there for everybody to see. What’s the first thing that investigators look for?

“Well, one of the first things they’ll look for is does anyone recognise this piece. The manufacturer’s engineers will know fairly quickly what this came from.” – Joe on CNN

Then they move on to the next part of the process…

2. MAS flers recognised it as THEIR missing plane Joe pointing to distinctive marks that they can use as clues

So it may not be anyone’s or your grandma’s Boeing 777, but specifically MAS’s MH370 plane. They’ll look for unique markings, serial numbers, manufacturing stamps.

A cool device they’re using is a scanning electron microscope which is capable of reading out what elements the metal is made of and analyse layers of paint. If they know MAS painted MH370 a certain colour with a certain material of paint, then they can look at the piece and match it to MAS’s plane.

Representatives from MAS had informed the prosecutor and his team about some very specific elements of their flaperon and the team was able to compare that to the piece that washed ashore. It was in line the common characteristics they described. Accepting the conclusion, MAS issued a statement yesterday.

3. Investigating WHAT caused the plane to crash Using a low res microscope to check out the damage

This is something that can’t be done with the naked eye, so they use a low resolution microscope.

“Very helpful for them to know whether things came apart because of a lot of force, impact, or whether they broke up because of, let’s say fatigue in the air.” – Joe on CNN

It has a rotating capability to scan the object, producing a record that investigators can use to develop a 3D image on a computer. The damage pattern will tell investigators what exactly happened. What they found appears to be a small amount of damage to the front of the flaperon and a ragged horizontal tear across the back.

There have been a number of differing opinions on how to interpret this, but the American Mobile Satellite deduce that the piece fluttered until it broke off while the plane was in a high-speed, steep, spiral descent in the air. At this point, investigations are still ongoing and they can only conclude what happened to the flaperon – not the whole plane.

4. Picking up black box signals in the same ocean 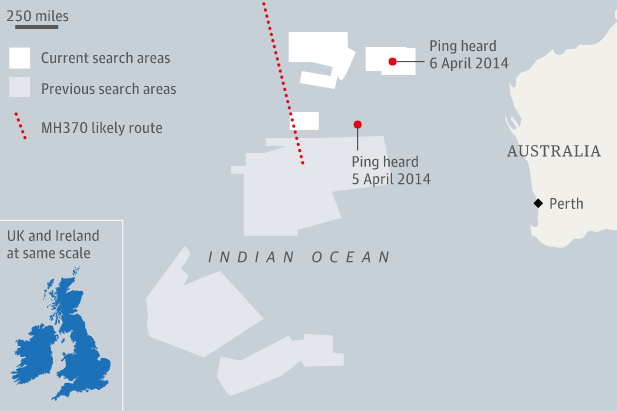 Image from The Guardian

Stumbling upon the flaperon – which was a real stroke of luck – probably will not change anything in regards to finding other parts of the plane, like the body of the plane and the black box. Meaning they can’t be any MORE optimistic about the search than they were before, Australian Deputy Prime Minister Warren Truss had explained. They can only hope for the best…

On the bright side, there was a time ago when investigators came close to the trail of the black box last year – and guess where…. it was in the Indian Ocean near Reunion Island! An Australian defence vessel called Ocean Shield picked up black box-like signals, the first lasting 2 hours, 20 minutes and the second, 13 minutes. Back then, it really was the most promising lead everyone had in the search.

So basically they should keep looking around the Indian Ocean areas la, right? Geez, you don’t say! Thanks to scientists we can predict where plane parts might show up. Image from CNN

The Indian Ocean is like 28.4 million sq miles wide – the thought of it is every bit as scary as 1MDB’s missing RM42 billion. Yet, the flaperon did manage to show up on shore! With this, scientists from The University of Western Australia drew up a map where other parts of the plane might be found in the coming weeks around Reunion Island and Madagascar.

Actually the scientists have been drawing up computer modelling maps since 12 months ago and refined it summore on 31 July. They’re based on potential drift patterns based on ocean currents and stuff.

“The ocean is a great disperser. If you put 3 objects in the ocean of different sizes and shapes, and let them go at the same time from the same place, over time the ocean will separate them, depending on whether they’re being pushed by the winds or the currents or a combination of both.” – Warren Truss, Australia DPM on CNN

But Professor Charitha Pattiaratchi who’s leading the search, hopes that pieces will show up in different locations. He said that through reverse computer modelling, it’s possible to reduce uncertainties in the search area.

Hopefully it ends with closure for the families And hopefully it’ll help them move on with life. Photo from US News

Most of the experts agree that finding the flaperon doesn’t change much. Even if it’s at least one step forward in the investigations.

“It confirms the sad truth that the plane ended up in the water with all its passengers and crew and that there were no survivors, and that’s the fundamental truth of today. The confirmation on how it went down is still many months away. This is a very difficult investigation. It’s going to continue to be one.” – Peter Goelz, CNN aviation analyst

Unfortunately, if anything… finding the more parts now might just reopen wounds that have been slowly healing with the passage of time. Grieving relatives still don’t know what happened to the plane or its passengers and until then, reminders offer more pain than solace.

As for the average Malaysian, 2015 has so far not been much better a year than 2014, but unlike the relatives of the ill-fated MH370 passengers, we can actually do something about it.

We have something missing too and hopefully we’ll also find the answers soon.