Today, 8 March 2015, marks the one year anniversary of MH370’s tragic disappearance but no trace of the plane has been found.

More than 10 months after it went missing, Malaysia officially declared it an accident, presumed to have gone down into the Southern Indian Ocean. All 239 people aboard the Boeing 777 were presumed dead and the search for survivors was called off, although underwater search for the wreckage continued.

In the latest news, rumours were circulating that Australia is stepping out of the search, but Warren Truss’ (Australian Deputy Prime Minister) office assured that it WASN’T TRUE. “Discussions are not under way to call off the search. Discussions are ongoing about the search,” said a spokesman. However, the Deputy PM said that though they would do everything reasonably possible to find MH370, the search can’t go on forever.

Yes, governments around the world spent huge amounts of resources to help Malaysia in the search effort (here’s an infographic of countries that responded), but there were also millions of ordinary people who cared.

Here are 6 heart-warming efforts from ordinary people who really gave their all towards the MH370 effort.

1. The fishermen who used sonar boats in the search Fisherman in Kedah watching the sonar. Image from The Star.

Thumbs up to our Malaysian fishermen! Life at sea is already a challenge, and yet they took the time and effort to look for the plane with the resources they had.

Along the Malacca Straits in Kedah and Perlis, more than 30 fishing boats joined in the search party. Kuala Kedah Fishermen Association Deputy General Manager Mohd Sam Mohd Zuki described how sonar technology that’s used to detect fish would work in this case: “These devices (sonar), which can detect all the way down to the seabed can also detect heat or thermal reaction of the aircraft. We also use GPS,” he told The Star.

2. The SES volunteers who flew 15 hours daily over the ocean Jim Maclean and Lyn Bryant, SES volunteers. The faces of dedication, yo! Image from The Guardian.

Could you spend 15 hours looking for something? Probably not a lot of people can, but more than 200 Perth State Emergency Service (SES) volunteers did just that to look for signs of the missing aircraft, and all without taking payment, reported Paul Farrell in The Guardian.

SES observers chartered long-range commercial jets and spent abound 15 hours daily concentrating intensely over the ocean. “You might have a second or a second and a half between seeing something and it disappearing from your view,” recounted Jim Maclean, who has been with Perth SES for 32 years. “So you’ve got to look at it, identify it and decide whether it warrants being called in before it disappears out the side of your view.” For 15 hours, this was what SES volunteers looked at everyday. Screen cap from The Sydney Morning Herald’s video report.

Volunteers were trained by the Australian Maritime Safety Authority on search patterns and aircraft safety, wrote Chenee Marrapodi in The Sydney Morning Herald. They were also taught to SACCADE rather than see – that is to move their heads in fixed positions to scan down and back for pinpoint accuracy. “When you look, you poise as you go up and you poise as you go down. So you’re basically covering the whole of the area as you’re moving. Your peripheral vision comes into play as well,” described Lyn Bryant, another SES volunteer.

Why would anyone spend 15 hours in a plane staring out at the ocean? Lyn said the team were only glad to help if it would give the families of the flight victims closure.

“We’re just up there trying to find evidence that this plane went down here in the ocean to give the relatives and friends something to grasp.” – Lyn Bryant, SES volunteer, The Guardian

3. The guy with a campaign to hire a private investigator… And the P.I. themselves Ethan Hunt, organiser of a fund-raiser for MH370. Image from Gareth Brown on The Guardian.

After 2 months of desperate waiting and no news, families of the MH370 flight passengers took matters into their own hands by launching a fund-raiser to reward any insider who could come forward and resolve the mystery of the plane’s disappearance.

How could a plane VANISH in the 21st century? It was impossible, they felt. So the Reward MH370 campaign went live on Indiegogo’s platform with a US$5 million target. It was organised by Ethan Hunt (not the Mission Impossible guy), CEO of an Australian 3D printing company called Rapide 3D and part-time investigator (ok, maybe a bit like the MI guy).

NAH, BACA:
5 technologies that are helping in the search of MH370

The story began when 6 very different people across the globe set out to solve the strangest mystery of modern aviation. You can read about it in Jon Ronson’s report in The Guardian.

Who did Ethan lose on MH370? Surprisingly, NO ONE. Then why is he doing this? After watching Sarah Bajc crying on TV (Sarah’s boyfriend Philip Wood was on board the plane), he felt a compulsion to just… help. Sarah and Philip. Image from Indiegogo.

Their efforts were noble, but the team didn’t manage to come up with $5 million. When the campaign ended on 8 August with a total of $100,516, they had so abandon the reward idea. So they used the money to hire a team of private investigators instead in the hopes of finding answers.

Today, they’ve used up all the money, but the PI firm is still working for them for free. If they come closer to solving the mystery, we’ll update it here.

4. The psychologists and counsellors who offered a shoulder to cry on

Everyone scrambled to aid in the aircraft search when the news came out, but there were others who did not forget the people who would be affected most – FAMILIES of the flight victims. Counsellors stationed at KLIA. Image from The Ant Daily.

To help loved ones cope with their sadness, special assistance teams of psychologists and counsellors were stationed in Malaysia and dispatched to Beijing. Dr. Anasuya Jegathesan, a senior lecturer at HELP University College and Academic Head of Master’s in counselling programme, was one of the psychologists stationed in KLIA. “Everybody is frustrated, that is the bottom line. We are here to listen to them rather than say anything,” she told Cecilia Jeyanthi Victor from The Ant Daily.

Beyond counselling, Dr. Anasuya said there was little they could do to ease their pain and anger. “We listen as a fellow human being and allow them to express how they feel. You (approach them)… and let them convey what they are feeling, so that it helps calm them down.”

Over at the Lido Hotel in Beijing, volunteers from the Tzu-Chi Foundation accompanied families who camped out there as they waited for more information. The Taiwanese organisation had also sent 50 volunteers to KLIA. Zeng Yunji, a volunteer in Beijing reflected on his experience:

“Volunteers will bring them tea, snacks and fruits anytime. Over the past few days, they have been so worried about their relatives on the plane that they no longer have the mood to take care of themselves.” – Zeng Yunji, Tzu-Chi Foundation, Channel News Asia

In their time of sadness, it’s heart-warming to know that some people still cared.

5. The 3 million internet users who combed inches of satellite imagery Screenshot of a search on Tomnod.

And let’s not forget the regular Joes behind their computers!

Three million Internet users started the world’s largest crowd-sourcing project when they joined in the hunt for the missing MH370 plane. That’s literally about half of the world’s population! Using a satellite imaging tool called Tomnod, by DigitalGlobe, volunteers combed through imagery displaying large swathes of the ocean and tagged 2.9 million areas of interest on the map.

So how does the tool work?

Rakesh Sharma from Forbes spoke to Dr. Shay Har Noy, Director of geospatial data at DigitalGlobe, to understand the process. He explained that because computer vision is not 100% accurate, they gabung it with human cognition to recognise data patterns. Sorta like a machine-human hybrid.

“For example, if 9 out of 10 people agreed on a piece of debris, then it was categorised as such. However, the reputation and ranking of the individual dissenting opinion may also have the power to sway opinions. The goal was to make a statistically significant aggregate of key features.” – Dr. Shay Har Noy, Director of geospatial data at DigitalGlobe, Forbes

With people tagging ‘suspicious’ things on the map that looked like wreckage, rafts, oil slicks and stuff, the Australian Maritime Authority was able to shrink the search area by a whole lot and eliminate sketchy objects that would have otherwise required hours to identify.

We have one more heart-warming story to share with you.

Three months after the MH370 tragedy, flight MH17 was shot down. Relatives of the passengers and crew members of the former came forward to counsel the loved ones of MH17 victims. Jacquita Gonzalez, wife of MH370 in-flight supervisor Patrick Francis Gomez had this to say: 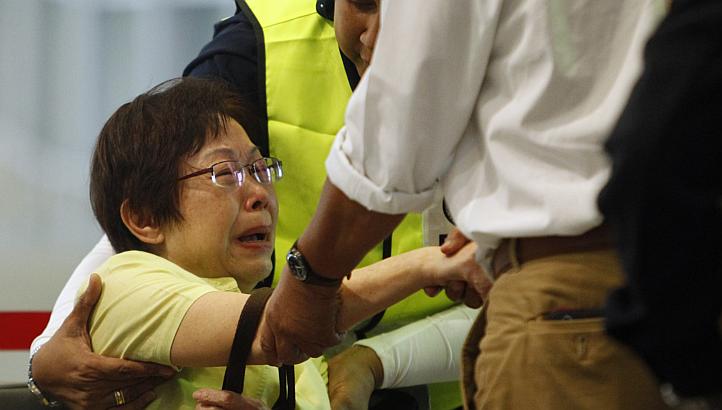 Image from The Straits Times.

Now one year on, there is better hope for the future of air travelling. Australia, Malaysia and Indonesia are testing a new aircraft tracking system which raises the monitor rate from 30-40 minutes to 15 minutes as planes fly over remote oceans. And if a plane deviates more than 200 feet from its assigned level or 2 nautical miles from its expected track, the system would automatically monitor it every 5 minutes or almost continuously.

Air Chief Marshal Angus Houston told The Malay Mail Online that though it’s “not a silver bullet”, he believes it is a big step forward.

So there IS hope. We make mistakes, we correct them, we do better next time.