I’m sure you’re wondering, “How can there be a tall, pale, cloak wearing, blood sucking creature living in Malaysia?” Either that or, “How can a vampire go unnoticed in a hot, sunny country like Malaysia – wouldn’t they… SPARKLE??”

Well, I’m here to tell you a few things, the most important of which being: No, I do not sparkle. BUT, I do feed on rely on the blood of others for survival!

Me. GIF from the movie Dracula: Dead and Loving It

For me, at the age of 20, I get just under three bags of blood (900ml) every 3-4 weeks, so in other words, I have three victims a month!! My blood transfusions began when I was about 1.5 years old – or 18 months, for all the new mothers out there who like to refer to their babies’ ages in months instead of years… As for my iron chelation meds, they come in tablet form which I just dissolve in water and drink every day. Easy peasy, guys! Cilisos editor, Chak, getting ready to donate blood for me! ?

Besides that, most people with Beta Thalassemia Major who get proper treatment look and behave like any other person, except for the fact that we can get tired a bit easier than others as our haemoglobin (HB) levels are generally lower than normal people’s.

Now, there’s a great amount of awareness spread about blood donations and its benefits and all that, but not that much awareness about the recipients’ side, so here are 5 things I learned being a vampire in Malaysia:

You might think that once blood is donated, patients will get it for free, but sadly, that’s not the case. According to The Star, hospitals usually get their blood from the National Blood Centre (NBC) at RM30 per bag. Back in 2014, The Star also reported that patients in private hospitals were being charged up to RM250 for a bag of blood which is INSANE considering the blood is obtained from DONATIONS and not sales.

Just to confirm things, we called the blood bank of a private hospital to ask a bit more about the donation costs. A representative, who chose to remain anonymous, confirmed that the National Blood Centre does charge the hospital RM30 per bag of blood (for the bag itself and any other equipment they use), but she did not know how much the private hospital itself charged patients for the blood…. From my blood transfusion bill: RM690 for 3 bags of blood!!

Audrey told us that her daughter’s blood transfusions in a government hospital only cost around RM93 a month for 3 bags of blood and a small service fee. On the other hand, the monthly cost of transfusions for Elisabeth’s children in a private hospital amount to RM1,800 EACH for only 2 bags of blood per child! Mahalnyaaaa….

But then again, if you’re a patient in a private hospital, it’s only normal you’d pay more than what you would at a government hospital la.

2. You CAN get diseases from blood transfusions!

Ya wei… I learned that the hard way when I got a serious case of dengue fever through a blood transfusion about 3 years ago. ?

It wasn’t until after the transfusion when I found out that the blood had the dengue virus in it and that I had been infected… The good thing was that the person who donated the blood was a family friend, and she called to let us know that she only just found out that she had it too. So in the end, we learned that despite the screening of donated blood, it’s still possible for diseases to be transmitted. Cooties can’t be transmitted, but AIDS can. Image from me.me

When it comes to screening, donated blood is tested for diseases such as HIV, hepatitis B, hepatitis C and syphilis. Unfortunately, the transmission of diseases through blood transfusions has happened more often than not, for instance, in India, over 14,000 cases of HIV have been caused due to unsafe blood transfusion over the last 7 years!

Even in Malaysia, there have been a couple of big cases where diseases have been spread through transfusions. In 2016, an Ipoh man, contracted HIV from a blood transfusion after he was involved in an accident. He sued the hospital (Kinta Medical Centre) a total of RM896,000!

According to the transfusion guidelines. Screenshot from hsajb.moh.gov.my

So truthfully, if you’re a patient, you can never know for sure whether or not the blood you receive is infected. Hopefully with advanced technology nowadays, hospitals and blood banks will be able to screen the blood for more diseases before it is used.

3. Some Malaysian patients get free iron chelation medication, while others don’t

And I’m one of those who don’t…

The only suitable GIF for free stuff, tbh

Depending on the type and dosage of medication we use, prices of our medication can go up to tens of thousands of RM per month!!

Here are the prices of the three main types of meds for an average adult dosage, as of 2015:

The two mothers, Audrey and Elisabeth, also told us about the cost of medication for their children: Audrey’s daughter (government hospital) gets her medication TOTALLY FREE, while Elisabeth pays about RM10,000 a month for the medication for both her children (private hospital).

4. Unused blood gets… THROWN AWAY?

If you’ve ever wondered what happens to donated blood that isn’t used, well, it gets discarded. What a lot of people don’t know is that blood has “expiry dates,” which means that blood can’t be transfused into a patient after a period of time.

When a person donates blood, the blood is usually then separated into three main components that can be used for different types of transfusions: red blood cells, platelets and plasma. In some cases, the blood isn’t separated and is transfused as whole blood. I personally get only red blood cells.

To find out roughly how much blood gets unused, we asked the same hospital representative from earlier on.

“Unused blood gets thrown away… But the demand here is very high so we rarely throw them away… Sometimes we try to give some to the National Blood Centre if they need.” – representative of a private hospital blood bank

Besides that, blood is also thrown away whenever there is a problem with the donations or separation of the blood components. Back in 2007, a study on the National Blood Centre was carried out regarding discarded blood and it was found that out of over 390,000 donations throughout the year, almost 9,000 units of blood were thrown away!!! This study only looked at problems with the blood and separation and not expired blood so there could have been MORE wastage than what was studied!

Most of the time, it’s quite sad when people think we can’t do a lot of physical exercises because generally we may get tired more easily than other people, but actually with the right treatment, us vampires can actually do a lot of things!

A few years ago, I even got the chance to climb Mt. Kinabalu! Ok la, I didn’t reach the peak because it got a bit too tiring for me having to wake up at 1am and start climbing ASAP so I ended up being a bit too slow, BUT I did make it to Laban Rata (the rest stop about 2/3 of the way up), so I’m pretty proud of myself. That’s not all! A friend of mine, Andrea (not her real name) whom I’ve known since Standard 1 is also a Beta Thalassemia Major patient, and is super active in cheerleading – which is, by the way, a really really tiring sport. Here’s what she told me:

“It doesn’t really limit me from doing sports other people are doing , but only when my HB is lower, I get tired and out of breath more easily. But I’ve trained up my stamina and exercised very often over the years so I don’t feel as tired as other Thal patients.” – Andrea To be honest, one good thing came out of this assumption that a lot of people have: I always have an excuse if I ever want to skip out on tiring activities like hiking with friends! 😉

If Thalassemia is treated well, patients will have little to no difficulties at all!

Beta Thalassemia Major is a genetic disorder, which means it’s in the genes (duh…), but it can be “prevented” in a way. See, Thalassemia Major happens when a person inherits two Thalassemia genes  from both parents. Here’s an easy way to look at it: So to be on the safe side, before planning to start a family, it could help a lot for couples just to get a simple blood test done because a lot of the time, people are unaware that they are carriers of the Thalassemia gene. 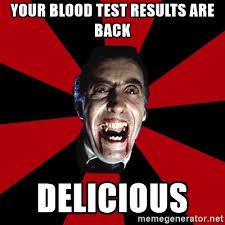 If parents do find out that their baby has this condition and are afraid it would be too expensive of difficult to maintain, Thalassemia Major is potentially curable with either a bone marrow transplant or a stem cell transplant but like with any other surgery, there are RISKS. For these surgeries, there is no 100% success rate, and that rate depends on the age of the patient – younger patients have a higher success rate.

But for us older Thalassemia patients, as long as our treatments are consistent and effective, this condition doesn’t give us much problems at all. To me, going to the hospital once a month doesn’t really bother me; I’m pretty darn happy with my life and I’m sure that if I keep working and studying hard, I will still be successful despite being a vampire! ☺️