Who among us Malaysians have never heard of a guy called Jamal Yunos? The name may leave some people scratching their heads, so here’s a reminder.

Jamal Yunos, or Datuk Seri Jamal Yunos, is most probably known most as the leader of the Red Shirts, a group that organized anti-Bersih rallies. While his official post is the Umno chief as well as the BN parliament’s chairman for the Sungai Besar division, Jamal is also famously known as the owner of a chain of restaurants called Sekinchan Ikan Bakar.

However, what really put him under the media’s spotlight was a series of outlandish political stunts. To cover all of them would warrant an article on its own, but some of them include: While the media was still abuzz with the final stunt on that list, Jamal once again made headlines when he announced his intention to replace Youth and Sports Minister Khairy Jamaluddin as Umno Youth Chief, should Khairy no longer want the post.

Ehh… He looks pretty old. Why would he want to be Youth Chief?

Some may think that the list above is reason enough for this piece of news to be alarming, but for Jamal to be a Youth Chief… Isn’t he a little too old for that? Jamal was born in 1970, which would make him approximately 47 years old this year.

While it may seem a bit weird, Malaysia had a somewhat loose definition of youth. The National Youth Development Policy categorizes youths to be people aged between 15 to 40 years old, but Khairy had planned to narrow that range down to 15-30 next year. Therefore, by definition, Jamal is not a youth.

Khairy Jamaluddin, on the other hand, is 41 years old, and has held the post since 2009. While Khairy himself had so far said nothing about Jamal’s announcement, according to Jamal in a recent Umno assembly Khairy had stated that this would be his last term as Umno Youth Chief.

“I feel that I also have a right to offer myself as a candidate for Umno Youth chief because in his address at the Umno general assembly before this Khairy had said this would be his last term,” – Jamal Yunos, for FMT.

As to why would he suddenly have his eyes on the Youth Chief post when he’s the Sungai Besar Division Chief, Jamal had stated that it’s a possibility should there be no seat for him to contest in the approaching general election.

So far, it would seem that he’s serious about becoming Youth Chief, or perhaps he had no choice but to. What are the other people in Umno saying about this?

Perhaps unsurprisingly, UMNO leaders are behind him on this When news of Jamal wanting to contest for the UMNO Youth Chief Post came about, one of his backers is a member of the UMNO supreme council, the Tourism and Culture Minister Mohamed Nazri Aziz himself. Nazri had been quoted as saying that should Jamal go for the post, as a member of UMNO Jamal could rely on his support.

“Why not? If Khairy does not stand (for the post in the next party election), then Jamal can go for it. What’s the problem? I think he is a good candidate,” – Nazri Aziz, for FMT.

Nazri had later met with Jamal on the matter, and Jamal had claimed that Nazri had said that he would support him if he was indeed serious and not playing around. Jamal, seen not playing around. Source

Armand Azha Abu Hanifah, an UMNO Youth exco member had said that there is nothing wrong with Jamal wanting to contest for the post if Khairy vacated it. Widia Wati, from Sungai Besar’s Puteri UMNO had also supported Jamal’s intention, convinced that Jamal has his own aspiration and mission to strengthen and enhance the party’s right wing in the future.

“To me, Jamal is worthy even though he had never led youths before, whether in the division or state levels. However, he is a brave person with a strong influence to lead and get support from the younger generations,” –Widia Wati, Sungai Besar Puteri UMNO chief.

Widia had also felt that Jamal had been a success as a Division Chief, being able to handle some issues that the state government had failed in as well as increasing the number of voters in Sungai Besar.

While Umno had been very supportive of Jamal wanting to be Youth Chief, others outside the party aren’t sharing that enthusiasm.

A quick look at any of the comment sections of articles on the matter can give a general idea of how the public feels about Jamal becoming UMNO Youth Chief:

However, it’s not only the public who felt that way. Fahmi Fadzil, PKR’s communications director had said that to back Jamal on this, the Umno Youth must be ‘scraping the bottom of the barrel‘, showing that there is a lack of talent among the party’s youth.

PKR’s Batu MP, Tian Chua, on the other hand said that Umno supporting Jamal as Youth Chief showed how desperate they are, as Umno had to depend on Jamal playing the race card to save them. 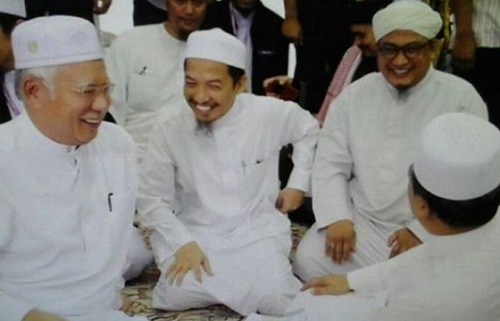 The race card and its implications can be a stimulating conversation topic for some. Source

On Jamal being the Youth Chief, Mukhriz Mahathir, deputy president of the PPBM and former Menteri Besar of Kedah had allegedly replied with a sarcastic

However, Mukhriz had also felt that Jamal offering himself to lead showed that Umno Youth is unable to attract intellectuals or people who are concerned with the country’s future, as all of them already left Umno for PPBM.

With all this negativity thrown Jamal’s way, one wonders…

Is he really up to the task of filling KJ’s shoes? Not everybody can pull off running shoes. Source

The Umno Youth had been said to be Umno’s right wing, so to actually lead it will be a significant responsibility. While Jamal had been the Sungai Besar Division’s chief, leading youths should be a more daunting task.

Academically, some had questioned whether Jamal, whose highest level of education is SPM, will be able to replace Khairy, who is an Oxford graduate. To that, Jamal had promised to reveal his credentials at the Pandan’s Umno Youth official event on the 23rd of July, and reveal he did. His short presentation, which included a video, garnered a standing ovation from Pandan’s Umno Youth delegates.

The video contained a montage of pictures from his primary and secondary school days, as well as his story of rising from a mere employee to owning several businesses.

“I have my qualifications. You can see it in the video just now. When it comes to qualifications, education and ability, we all have our advantages,” – Jamal Yunos, as quoted by MalaysiaKini.

But a leader isn’t measured by his academic qualifications alone. From the opposition side, Jamal’s only supporter seemed to PKR’s Pandan MP, Rafizi Ramli. In a statement to MalaysiaKini, Rafizi had felt that Jamal is qualified to replace Khairy, as he is brave. Perhaps even brave enough to defend Najib in a debate against him.

“Jamal wants to become the Umno Youth chief, Khairy is no longer as powerful now… after this I am willing to campaign for Jamal to become Umno Youth chief. Because if you want to compare Jamal with Khairy, I salute Jamal more because he is braver than Khairy. Jamal is brave enough to wear towels and I feel like if Jamal becomes the Umno Youth chief, if Najib is attacked and we call for a debate, Jamal would dare to,” – Rafizi Ramli, for MalaysiaKini.

Whether Rafizi’s comment was sincere or not is up for interpretation, but he does raise an interesting point. Jamal may not be the kind of leader that Khairy is, but that is not to say that he won’t be able to shoulder that responsibility. For now, only time will tell whether the Umno Youth will change for the better or for worse with him at the helm.