I still remember the first time I was introduced to the world of cheerleading. I was 12 and it was my first time attending The Star’s annual cheer competition as an audience. The performance, the crowd, the energy, the striking uniforms, the high-flying stunts and just the overall glitz and glamour of it completely bowled me over.

As the competition was for high school students only, I made a vow to myself that I would be in a cheer uniform and compete on the blue mat one day. Lucky for me, my ex-high school just formed the first cheerleading team to compete in the one and only competition back then (it was only The Star’s CHEER).

1. I freaked out the first time I witnessed a dislocated ankle It was a few weeks before competition and we were practicing our routine like any other day. Halfway through our stunt sequence, we heard a painful SCREAM from one of my teammates. It turned out that she fell and landed on her foot the wrong way. It resulted in her ankle dislocating and we saw… the dislocated bone from the outside!! There was a lot of screaming, crying and panicking from not just her, but the whole team. We even had to call an ambulance so that was really traumatizing, but thankfully we found a substitute and competed as planned.

I have experienced my fair share of injuries too, although they are not as serious. The list includes falling flat on my back multiple times, spraining my ankle and arm, hitting my head which resulted in a slight amnesia – like for real though, I couldn’t remember what happened the past 10 minutes – along with scratches, bruises, scars and cuts that I’ve practically lost count.

Yep, you might assume that cheerleading is just about waving pom-poms and yelling “Go team!”, but in truth, A LOT of injuries can happen behind-the-scenes. Did you know that cheerleading is the THIRD most dangerous sport in the world? More dangerous than freaking American football ok! And people worship those guys, geez. Cheerleading is also one of the major causes of brain injuries, according to the American Association of Neurological Surgeons. 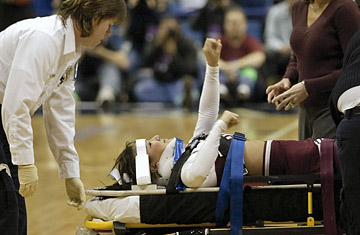 Heck, my teammate’s dislocated ankle and my 10-minute amnesia in fact can be considered ‘mild’ compared to some of the WORST injuries that cheerleaders experience – there have been skull fractures, cervical spine injuries, paralysis, and deaths reported.

2. I found out that cheerleading isn’t exactly an affordable sport

Other school sports were considerably cheaper (if not free)

Being in a government school, I was used to the idea that we don’t have to pay for anything except the yearly PIBG fees, so it kind of confused me when I found out that we had to pay for coaching fees which was RM60-RM70 a month. As we progressed, other fees started popping up, like the occasional gym fees when we practiced out of school (RM5), cheerleading workshops (RM90-RM100) and even more $$ for competition stuffs (like props, transport, etc). Not to mention we couldn’t afford proper mats, so we used those kindergarten alphabet ones: The baby mats we practiced on because we couldn’t afford proper mats. Image from rubberflooringinc.com

The uniform itself was RM200+ which we will only wear ONCE for two and a half minutes, just so you know. Most cheer teams will design a new uniform every year cause seniors can’t pass down their uniforms to the juniors, as every uniform must be tailored according to our bodies. This means there is no such thing as reuse, reduce and recycle. Then there is music editing, which can cost an approximate RM200-RM500. And these were fares back in 2009-2011.

But this is just for high school level… cheerleaders in all-star (higher level) teams will definitely need to pay more as they participate in international competitions.

“All-star cheerleaders would have to spend quite a bit for say, a year. To break it down: uniform could easily cost them about RM300 to RM400, shoes another RM200+, if you’re getting the cheaper ones, that is. Fees would be RM80 a month for cheer, then gym fees requires RM70. Medical cost if you get injured like buying sports tape, cold sprays and whatnot can amount to around RM300. This excludes competition fee with international competition costing up to RM500, music which will be an approximate RM800 shared by a team and RM200 for props.” – Chung Yih Hern, Cheer Aspirations Awesome Legends Captain year 2015- 2016 and Team Malaysia Elite Captain year 2016. Some of the products and services offered by Cheer Aspirations

Yep, my (parents’) wallet found out that cheerleading is NOT CHEAP! While other students can just pinjam the padang and school facilities, we had to really fork out a lot of cash.

3. Just cause you’re a cheerleader, it doesn’t mean that you’re a bimbo

Cheerleaders in an American high school (left) vs Malaysia. Screengrab from R.AGE video

Back then, cheerleading was still a pretty new thing in my school, so we were also guilty of the ideal picture of hot jocks and pretty cheerleaders being the popular kids in school like every American movie. Those movie cheerleaders may look like Megan Fox doing splits in teeny shorts and a sports bra, but the reality was that our team just consisted of a bunch of Asian girls wearing our PJK t-shirt and track bottoms. As a matter of fact, teachers in our school did not allow shorts cause, haram.

“When anyone mentions the word ‘cheerleader’, the common perception is a not-so-bright girl wearing a sexy outfit and shaking some pom poms. It is sad, but we are slowly and surely working hard to change that perception.” – Jaymee Tan Yee Ming, Coach, owner and director for Cheer Aspirations, Vulcan Post

While it’s true that we have to skip classes to practice, especially when competition is near, our grades have never been compromised. I had a close friend who scored 10As for SPM, and another friend scored the highest marks in Malaysia for History in her A-Levels.

Cheerleading can also be life-changing. The dedicated teacher of Team Ignite used this sport to turn the misfits of their school around. Click here to watch the boys from Bandar Baru Uda, Johor, talk about it has given them discipline and a sense of purpose, keeping them away from bad influences. You might also think that some people would call us mengada for importing this Western culture into local schools, but strangely, for my team, we never experienced anyone from our school calling us out. In truth, the students at my school didn’t even bother enough to make fun of us.

4. No, male cheerleaders are not ‘pondans’ either “We were teased by some of our friends, discriminated and stereotyped as “soft,” “gay,” “pom-pom boys,” – Brandon Tan, cheerleader.

While I love my stronk female bases, I actually feel safer flying on male bases when I cheered in college because they provide more stability and security to the flyer since they’re stronger and their palms are bigger. Check them in action and see if you still think this is easy:

As a matter of fact, there are plenty of physical and psychological benefits for male cheerleaders like improving their stamina, coordination and strength. Cheerleading also enhances confidence, positivity and team work! Ok, now you’re probably wondering why they didn’t go for a ‘manlier’ sport like football, rugby or whatever, well:

“I joined cheerleading because of the uniqueness of the sport. The elements of cheer like performing, stunting, tumbling and dancing makes it really different from other sport.” – Aloysius Lim (my college cheerleading teammate)

Before the co-ed (boys and girls) team were introduced in CHEER in 2011, there were only all-boys or all-girls. The all-boys team probably had to face more cruel teasing, but come on guys, these boys are buff and strong and talented and they are athletes who LIFT people. That’s right, it’s people, not just one person. Have you ever seen one guy lifting 3 people at one go? This stunt is called a triple cupie:

Can a regular guy do this?! Image from cheerleadingconfessions.tumblr.com

In all seriousness, it’s seriously unfair and downright bullying to make fun of someone because one cannot or refuse to understand the nature of a misunderstood sport. If Tom Holland can go from Billy Elliot to Spiderman, people can stop calling cheer boys ‘pondan.’ Even George W. Bush and Samuel L. Jackson were cheerleaders!

Didchu know that cheerleading has been granted provisional Olympic status??!! Yes, cheerleading is finally being recognized as a legit sport, deal with it!! 😛

Plus, the cheerleading scene in Malaysia today is definitely looking better than before. With companies like Cheer Aspirations and Cheer Aces who specifically cater to the industry, the number of competition opportunities and all-star teams to represent our country is increasing. We have come a long way from the first and only CHEER competition organized by The Star to a number of all-star teams participating (and winning!) international competitions now. The Awesome All-Stars finishing third at the Australian All-Stars Cheerleading Federation (AASCF) in Melbourne, Australia back in 2013. Image from R.AGE

The annual CHARM Cheerleading Championships organized by the Cheerleading Association and Register of Malaysia (CHARM) has also introduced the all-college division which will encourage cheerleaders to continue their career beyond their SMK days.

People like Jaymee Tan, founder and CEO of Cheer Aspirations, vice president of CHARM, coach and judge of various prestigious championships like the International Cheer Union World Championships is proving that prancing around in miniskirts with pom-poms can bring you quite far in life.

“I strongly believe cheerleading benefits us in so many ways – to be a team player, to be positive, to have discipline, dedication and leadership. Most importantly, the strong bond and memories that the cheerleaders form with their teammates is something they will cherish and remember for the rest of their lives.” – Jaymee Tan Yee Ming, AOne

We may not be on par with the US, but the cheerleading scene and the people who are involved in it here are on the right track to expanding and establishing the industry. I may not be cheering anymore but I will always remember the first time I put on my very own cheer uniform. It was extremely difficult to put on cause it was so tight, but the feeling of performing the perfect routine in front of thousands of people as they cheer for you (ironic, right? People cheering for cheerleaders), is what us cheerleaders live for. After all, once a cheerleader, always a cheerleader.