When it comes to finance ministers, perhaps Anwar Ibrahim would be the most popular, having served as finance minister and DPM at the same time before being imprisoned. But since the time of former PM Abdullah Ahmad Badawi, the position of finance minister has always been held by the PM himself. For a few years, even Mahathir served as his own finance Minister.

But actually, did you know we once had a finance minister who was not only not a PM, but was also picked two times. He was the 2nd longest serving finance minister of Malaysia, having about 9 years under his belt. During both his terms, he even had to preside over two separate MAJOR financial crises. But, he was not a fan of making headlines and was a man of few words, to the point of being painted by the media as a “mysterious figure“. Despite that, his comment once lead KL stock market to crash. Not too long ago, he returned to the spotlight when he voiced his concerns about Malaysia’s current economic situation, even signing the Citizen’s Declaration (though he did not attend the press conference) that called for PM Najib to resign.

So, who is this guy Mahathir appointed twice as finance minister? We shed some light on Tun Daim Zainuddin. His experience and pursuit in business lead him into politics

He was a law graduate from Lincoln’s Inn in london. He worked for a few law firms and had some success serving the government. Eventually set up his very own firm: Daim and Co., with a fiery ambition of becoming a millionaire. He managed to get a RM 10,000 loan from Majlis Amanah Rakyat (MARA), whch he used it to invest in stocks. He profited at first but the market crashed when the May 13 riots happened. His lost was so great he swore off investing in stocks, not until he learns more about it at least.

Not discouraged, he ventured into production and established factories, but that failed too, costing him hundreds of thousands of ringgit. His breakthrough came in the form of a property development project. Under his company “Maluri“, they got hold of a plot of land near Cheras from the government. The project was developed into housing estates and shop lots, and is known till today as Taman Maluri.

In Lincoln’s Inn, he was rubbing shoulders with political big shots like Tengku Razaleigh (former finance minister), Syed Jaafar Albar (former UMNO secretary general) dan Tun Hussein Onn (3rd prime minister). But, Tun Daim himself cites his first brush with politics was when he was working in Allen & Gledhill law firm, working on a political case in Sarawak, and he had to constantly report to ex PM Tun Abdul Razak. At one point, Tun Razak even offered him to run as a representative in the General Elections, but he refused because he wanted to focus on his businesses. Eventually, he accepted his appointment by Tun Hussein Onn as a senator in 1980. At the same time, he was also appointed as president of Peremba, a subsidiary of Urban Development Authority (UDA) and UMNO’s investment arm Fleet Holdings Sdn. Bhd.

In 1982, Mahathir asked Tun Daim to contest for the Kuala Muda seat in the general elections, which he accepted and later won. Shortly after that, he was promoted to finance minister in 1984.

As Manathir’s Finance Minister, he wrestled 2 financial crisis, among other things And macho mustachio. Image from kinibiz.com

Following his appointment to what is regarded as the 3rd most important position (after PM and DPM), many people (including reporters) started to wonder WHO he was, and HOW he ascended to a high rank in such a short time, because there was almost no news about him before. There was naturally a lot of doubt surrounding his capabilities, but not for too long.

Tun Daim was pretty much Dr. Mahathir’s economic general. The success of Mahathir’s economical legacy would not have been the same if not for Tun Daim, and Mahathir himself admitted the proficiency of Tun Daim’s business know-how.

“(He) knows the nitty gritty, the way to carry out (the policies). For example, if I say privatisation, his job is to find the means of privatising. He showed how it should be done and all that.” – quoted from Kinibiz article “Daim: From teacher to corporate godfather”

Once elected, Tun Daim had about 3 months to prepare the Federal Budget, while at the same time the 1985 economic recession was looming over SEA like an impending storm. Not only did he completed the budget in time, he also managed to keep the economy afloat during the recession.

He also helped implement the famous “Dasar Penswastaan“, which privatised companies like Telekom, TNB, Pos Malaysia, and many more. So skilled was he at business-ing, that he even turned the once nameless islands of Langkawi and Labuan profitable:

“When Dr. Mahathir gave the responsibility of Langkawi to Daim, he transformed the cursed island of Mahsuri into a tourist attraction that’s famous both in and out of Malaysia. When Labuan was given to him, it was made into a investment hub.” – Surat daripade Dr. Mahathir, p213

Even after he resigned from cabinet, Mahathir still appointed him as Economic Advisor to the Government, and also as Treasurer of UMNO.

NAH, BACA:
Is it worth it to Balik Undi in GE14? Here's a list of the most narrow-win seats. With his accumulated abilities and influence, he set his sights beyond Malaysia 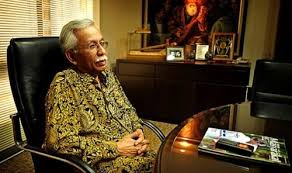 When he resigned as finance minister in 1991, it caused a major stir because it was not common for high ranking government officials to do such a thing, least the finance minister of Malaysia. According to Tun Daim himself, he resigned because he felt he has fulfilled his duty as minister, and wanted to focus on his businesses again.

He started an investment bank in Switzerland called International Commercial Bank, which by 2007 was awarded “Bank of the Year” by The Banker magazine 4 years in a row. His bank reached across the globe, setting up in various countries including Czech Republic, Hungary, Guinea, Ghana, *inhales*, Tanzania, Albania, Sierra Leone and Gambia. In the process, he also bought over Hock Hua bank, Bank Bumiputera Indonesia, and Oriental Bank from Bangladesh.

Where are these countries even. Image from twistedsifter.com

He became so influential and well-known, that his words once influenced the stock market. In 1993, he gave an interview with BERNAMA, where he commented that the stock market boom has reached a critical stage, and he had already cashed out his shares. Because he was known to own shares in many companies listed on Kuala Lumpur Stock Exchange, it caused a widespread panic in the market when BERNAMA published the article 5 days later, and investors lost thousands of ringgit in a flash.

And now this financial big shot is critisising our gomen, should we be worried? Aside from the economic climate, Tun Daim also had this to say:

“…the lack of integrity, honesty and moral courage. The lack of moral values is a widespread problem that exists among the country’s elite.” – Tun Daim Zainuddin, from The Edge, also from Sinar Harian.

Second finance minister Datuk Johari Abdul Ghani, said all criticism would be received positively by the gomen. However, he added that the current situation cannot be compared to the era of Tun Daim, while Minister of Tourism and Culture Nazri Aziz accused Tun Daim of being nostalgic of the days of Dr. Mahathir’s dictatorship.

Though a figure surrounded in controversy, from accusations of being a political mastermind to controlling the economy through filthy rich underlings, Tun Daim has had a hand in developing Malaysia. Looking at his many accomplishments as finance minister, it’s hard to deny the part he played to usher in the progress during Dr. Mahathir’s premiership. From overseeing Malaysia’s economy during the crises, to the modernisation of the financial system, not to mention his success in the international banking industry. When a figure such as Tun Daim finds the need to voice out, perhaps there is something here, for both the people and the government, that needs to be heeded and reflected upon. After all, thought they’re not always right, the wisdom of old does hold true sometimes.