To be honest, Thaipusam may be one of the lesser known Malaysian celebrations. To the general public, it’s considered an Indian festival and all of us get a public holiday. But what else do we know?

Let us first look at some of the things that make Thaipusam, well, Thaipusam. The word Thaipusam is derived from the Hindu month of Thai and the Pusam star which is at it’s peak during the festival.

What happens on this particular day? Well, in a nutshell, it commemorates the occasion whereby Parvati (the Hindu goddess of love, fertility and devotion) bestowed upon Murugan (the Hindu god of war who is also her son) a Vel (divine spear) to vanquish the demon known as Soorapadman. There are also other stories related to the origins of Thaipusam that you can read about here. 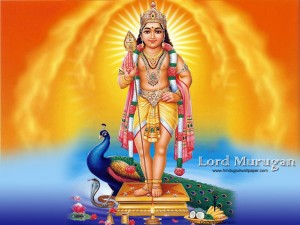 Murugan, the Hindu God of War. Image credit to hindugodwallpaper.com.

Besides origin stories, Thaipusam is when devotees who have made vows to Murugan would undergo certain devotional acts in exchange for having their prayers answered. These acts are where the kavadi comes in. It is said that the kavadi represents two hills in a story about Murugan and an asuran disciple by the name of Idumban. The kavadi are offerings that the devotees carry. It’s a very interesting story that you can also read about here. 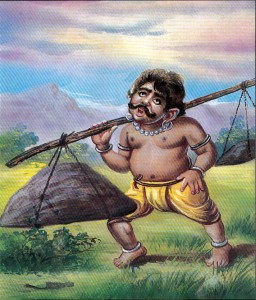 There are actually many different types of kavadi, each with a different level of preparation needed. They range from carrying a pot of milk (Paal Kavadi) to the large scale ones (Mayil Kavadi). You can check them out here.

Thaipusam is bigger in Malaysia than in India

Believe it or not, Thaipusam is more widely celebrated in Malaysia than by Hindus in other countries. Malaysia celebrates it on a very large scale as is evident in places like Batu Caves in Selangor and Waterfall Hill Temple in Penang. And as such it’s no surprise that huge numbers of devotees head to these places every year (about 1.6 million people expected at Batu Caves during Thaipusam 2015).

Recently though, it was reported that Hindraf (known for that one rally they did in 2007, not BERSIH), was urging people to boycott this year’s Thaipusam at Batu Caves. The reason being the installation of a new automated system that they claim desecrates an ancient Hindu rite.

This made us question of how has Thaipusam changed over the years. Because honestly, we know how culture can change the way a festival is conducted and we wanted to find out if it were the same with Thaipusam. So here we go once again, CILISOS number style.

Not all devotees carry big kavadis during Thaipusam. Many people actually carry a different kind of offering, which is a pot of milk (the Paal Kavadi as mentioned earlier).  Normally, devotees carry these pots of milk to the priests who will then pour the milk onto the deities while chanting mantras as a blessing and a cleansing of sins.

A new system however, will be introduced this year to allow devotees to pour milk into drums that channel the milk to a machine in the temple. They now don’t have to queue up to hand their pots to the priests. This was implemented to ease congestion and speed up the process.

But as mentioned earlier, this what’s gotten Hindraf’s feathers all ruffled up. Hindraf Makkal Sakhti, a human rights group, has protested against this saying that the new system ‘desecrates the ancient Hindu right and practice known as paal abishekam (the act of showering the milk on the deity)‘.

“There are no mantras chanted under the motorized method intended to be practiced in Batu Caves.

The belief between an individual and the deity is personal in nature, stressed the Hindraf Chief, “and therefore motorizing the showering of the deity or motorized abishekam is clearly an absurd method by the Batu Caves Committee.” – Hindraf Chief P. Waythamoorthy as quoted by Free Malaysia Today

However, it has also been reported that there still will be priests for those who prefer the traditional method. The new system will be available for those who would rather not wait in line.

As we’ve mentioned earlier, the kavadi represents a physical offering that devotees carry to seek the help of Murugan. 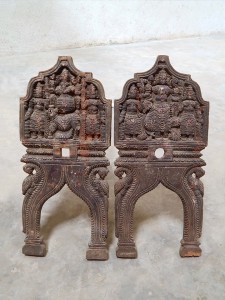 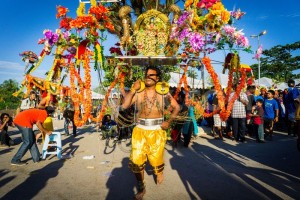 But while carrying the kavadi is an impressive feat, what makes it even more impressive is the design of the kavadi itself. According to this report by The Star, a kavadi is made using common items such as rattan, screws, bolts, peacock features and a statue of a deity but it is an intricate process.

A large kavadi, weighing between 40kg to 50kg, costs RM2,000. The high cost is because of the expensive peacock feathers. – Kumar the kavadi maker as quoted by The Star

And as time passed, these designs have also changed. In recent years there have been reports of kavadi designs that were very different from what people are used to. Well instead of talking about it, we’re just gonna show you. Liverpool logo on a kavadi. Photo credit to thestar.com.my.

Other logos on kavadis. Photo taken from forum.lowyat.net 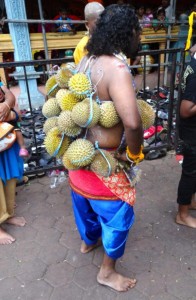 Durians fastened to hooks on a devotee’s back. Photo credit to fest300.com.

“First of all, people must understand the real sense of Thaipusam and why we carry the Kavadi. I think this football-inspired Kavadis are pointless and not funny. Maybe the people who choose to carry such Kavadi crave for people’s attention.” – Sujintheren, as quoted by malaysiandigest.com

3. Trance music now got use Gangnam style all

When carrying the kavadi, devotees go into a trance, an altered state of mind.

*Warning: not for the faint in heart*

According to the video above, the trance helps them block out their mind to everything, including pain. The video also states they are placed into a trance by their gurus but some also say that it can be induced with chanting, drumming and incense. It sounds something like this.

Anyway, this too has seen people use different errr…music in recent years to help with the trance process. This news report mentions how the popular song Gangnam Style was used in a trance recently. Original video below.

It was also mentioned that other popular songs such as the immensely popular Tamil song ‘Why This Kolaveri’ were also ‘widely used’ so these weren’t isolated incidents. Anyway, this wasn’t taken so well either. This article brands these acts as disrespectful and that it is a mockery to the event while this one said that the songs made Thaipusam look like a street dance event.

“There are many religious songs meant for Lord Murugan that they could have used for the festival. Yet, they chose ‘Gangnam Style’. It is a holy place not a pub. Please respect the place and the religion.” – Malaysian Hindu Sangam deputy president V.Kandasamy, as quoted by Astro Awani

Still, the article also said that people have defended the devotees saying that it isn’t the devotees themselves who are playing the songs but the vendors around them, which is what we will talk about next.

4. Some places now got fun fair

So we mentioned that they are vendors around during Thaipusam, and these vendors sell a variety of things. According to this piece, things like wigs, masks, and even vuvuzelas (!!!) are all sold by vendors during the festival. These have led to other criticisms as well, saying it has caused the event to look more like a fun fair than a religious event.

But wait for it.

For this year’s Thaipusam, Batu Caves is actually going to HOST AN ACTUAL FUN FAIR! It’s gonna be a six-day carnival on temple ground.

FYI, the idea for a fun fair was first cancelled in 2014 after 50 thousand signatures were gathered to protest against it. This is also after The Batu Caves Thaipusam Task Force, a coalition comprising Hindu Temples and Hindu-based NGOs, banned any form of entertainment last year as well. 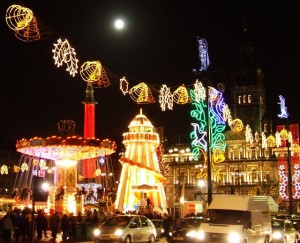 While it is called a fun fair, we’re not sure if they meant this kind. Photo credit to wikipedia.org

Thus it is no surprise that this year’s decision to have a fun fair was also on the receiving end of objections. The Batu Caves Thaipusam Task Force has urged the public to boycott the fun fair because it wouldn’t represent the religious tone of the festival.

With the Thaipusam crowd growing bigger and bigger, it would have been inevitable for people to eventually try to exploit the huge number of people. In the recent years (feels like we’ve said this phrase too often in this article) there have been a rise of complaints of syndicated parking operations.

Reports say that devotees who park their cars near Batu Caves were asked to pay up or risk their safety and the safety of their cars. And if someone says something like that to you, the only option really is to pay up. Other reports say that people are usually asked for a RM10 fare though from the excerpt below, it’s not actually fixed…

“I asked him why have to pay since it’s on the roadside and he answer ‘cari makan la anne’ (to make some money brother). I said no change…then he said RM5 also enough. What is happening? Someone has to do something to stop this.” – Anonymous, as quoted from The Malaysian Times.

This is actually such a big deal among syndicates that there was even a turf war about it between 3 rival gangs recently. It ended with one of them being injured via gunshot. So yea, guns involved. Where is Rajinikanth when you need him?

Aiyo… Why everything so negative?

Chup. There’s a positive side to this. In light of all these changes, we realised we have also seen a rise of responsibility and care during Thaipusam from authorities and organisations in the past few years. One thing we do really want to point out is this article by Malaysiakini (which deals with the issue of the new automated system in Batu Caves). Check this out.

“Whatever it is, I am glad to note that the Batu Caves Murugan temple committee has been receptive to the Hindu devotees views and sentiments and has announced that devotees who wish to perform milk abisyegam (offering) in the traditional way can continue to do so and the temple authorities will have enough manpower to facilitate it.

Whereas those devotees who feel that they cannot wait for too long in the queue are allowed to use the motorised method to perform their milk abisyegam.” – S. Param, as written for Malaysiakini

Besides that, the police force is also starting to take measures to ensure the safety of the people. Like for instance, 1,200 policemen will be deployed to the Batu Caves area to ensure the safety of the people so if got people come kacau you on that day ask for money, look for policeman and tell them. Whereas in Penang, 33 people were recently arrested on suspicions of planning a riot during Thaipusam festivities.

We could also go on to talk about how the Malaysian Plastics Manufacturers Association (MPMA) is organising a campaign to address the problem of litter that is left after Thaipusam. The Malaysia Hindu Sangam and the Malaysia Crime Prevention Foundation (MCPF) have also printed 15,000 copies of a guidelines set this year with the purpose of educating devotees on the proper rituals of Thaipusam.

Change for better or for worse?

So yea, Thaipusam is experiencing a lot of changes, just like other religious events and traditions that have experienced changes with the passage of time. An example would be the Chinese Hungry Ghost festival and how people now burn models of iPhones and swag kits instead of just money. Are these good or bad changes?

Well we would say that we are in no position to comment on whether these changes are positive or negative, but one thing’s for sure: we hope and believe that these changes would come to define us as a people, rather than destroy us.