An article written by The Star on 22 June 2017 described the atmosphere created by the popularity of a particular company, like its logo on tour buses and the aerobridge at Penang International Airport. Some Penangites may be familiar with this company but peeps in other states may be clueless about it. 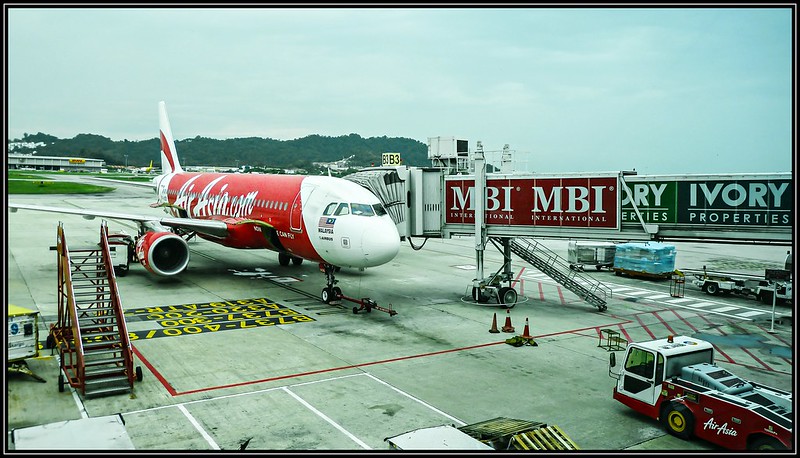 What is this company we speaketh of? Founded in 2009, it’s MBI International (MBI for short), which is a diversified investment company involved in several ventures like entertainment, tourism, restaurant, property development, technology, business, beauty and health, and more.

Yeah, this MBI. Image from The Sun Daily.

M Mall (a.k.a M Mall O2O), set up in 2015 by MBI near Penang Times Square, uses a loyalty point system. Customers who become members by investing in MBI get to convert virtual coins into loyalty points that they can use to purchase goods in M Mall. A mall that uses virtual currency? That’s… different. Turns out it’s a big hit among thousands of Chinese tourists (as in those from China) who are members of MBI and love shopping at M Mall with their loyalty points too.

You feel like shopping there but cha need some virtual coins. Image from Malay Mail.

MBI also has its hands in soooo many events and corporate social responsibility activities. Like, according to this forum post, MBI actually sponsored the Penang Bridge International Marathon (PBIM) 2017, which is a pretty huge event!

If you look closely at this poster, you’ll notice that it’s a major thing in Penang. Image from SGRunners.com

Maybe it sounds like any other successful diversified business but over the years, MBI has been subject to a lot of hoohah…

Last month, The Star reported that MBI directors finally pleaded guilty to money laundering crimes and were fined a total of RM20 million. The ordeal started when raids were done by enforcement officers from several agencies.

Back in 2011, MBI founder Tedy Teow Wooi Huat and his son Teow Chee Chow were fined RM160,000 and jailed for a day for cheating investors in their Island Red Cafe franchise scheme. 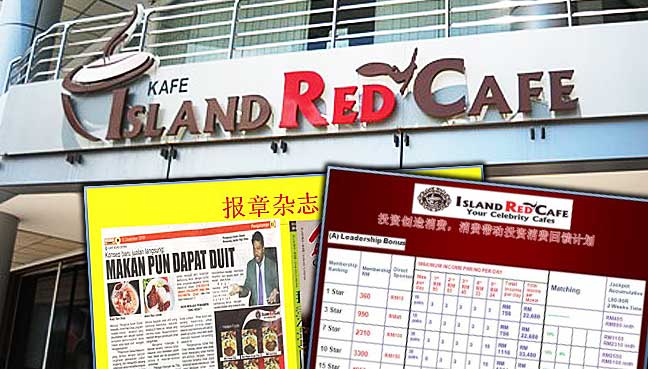 Why is it called Island Red Cafe anyway? Image from FMT.

“The man, believed to be the founder of the Group, has been remanded for four days for investigations under the Anti-Money Laundering, Anti-Terrorism Financing and Proceeds of Unlawful Activities Act 2001. Operations were conducted at about 6.30am yesterday at three premises believed to be involved in the pyramid scheme Mfc Club or Mface Club under the Group,” said Datuk Mohd Roslan Mahayudin, the Domestic Trade, Co-operatives and Consumerism Ministry (KPDNKK) enforcement chief.

After a year, Tedy Teow was fined RM5 million for issuing illegal payment instruments under the Payment Systems Act (but he denied it). Three directors of MFace (part of MBI) were charged with money laundering crimes too. Kau Fong Seng, Teow Ee Meng (another son of Tedy) and Wong Weng Torng received monies said to be raised from illegal activities and for promoting a pyramid scheme. 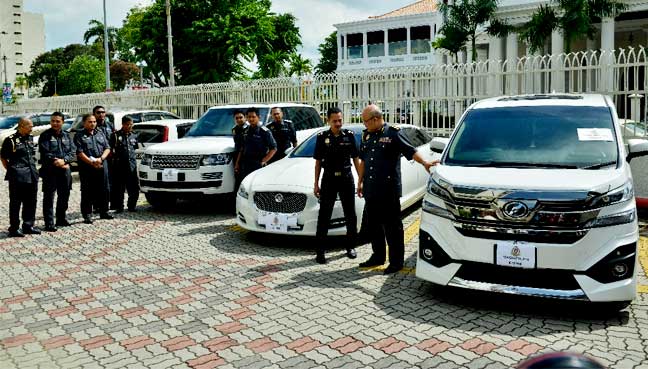 The 3 luxury cars seized.. so rich ah.. Image from FMT.

Because of all these financial crimes, MBI ended up on Bank Negara’s Financial Consumer Alert list. Even the Financial Markets Authority of New Zealand (FMA) issued a warning against MBI in light of its misleading seminars within the Chinese speaking community in Auckland.

Some investors have also been angry towards MBI. In June last year, an unhappy investor said in an online forum that he had lost his personal sum of 35,000 yuan (RM22,000) and his group in Guangxi has lost a sum of 51.6 million yuan (RM32.4 million) from investing with MBI. In the same forum thread, The Star found that 69 investors were gonna come to Malaysia to demand that MBI return their investments following Teow’s arrest.

A few months after that, MBI came under the spotlight again with estimated losses of RM700 million, which police believed involved 350,000 victims. Despite its notoriety, MBI still retained a strong presence last year, especially in Penang.

But is MBI really doomed?

There were many investors who still had faith in MBI. Despite knowing that MBI’s investment model would not get an official sanction in Malaysia, members believed that MBI will survive mainly because its business was “legit” and still “going on as usual” after the raids. One investor even told FMT that she hoped the authorities would not take action against M Mall because MBI and M Mall have honoured their promises and were problem-free. 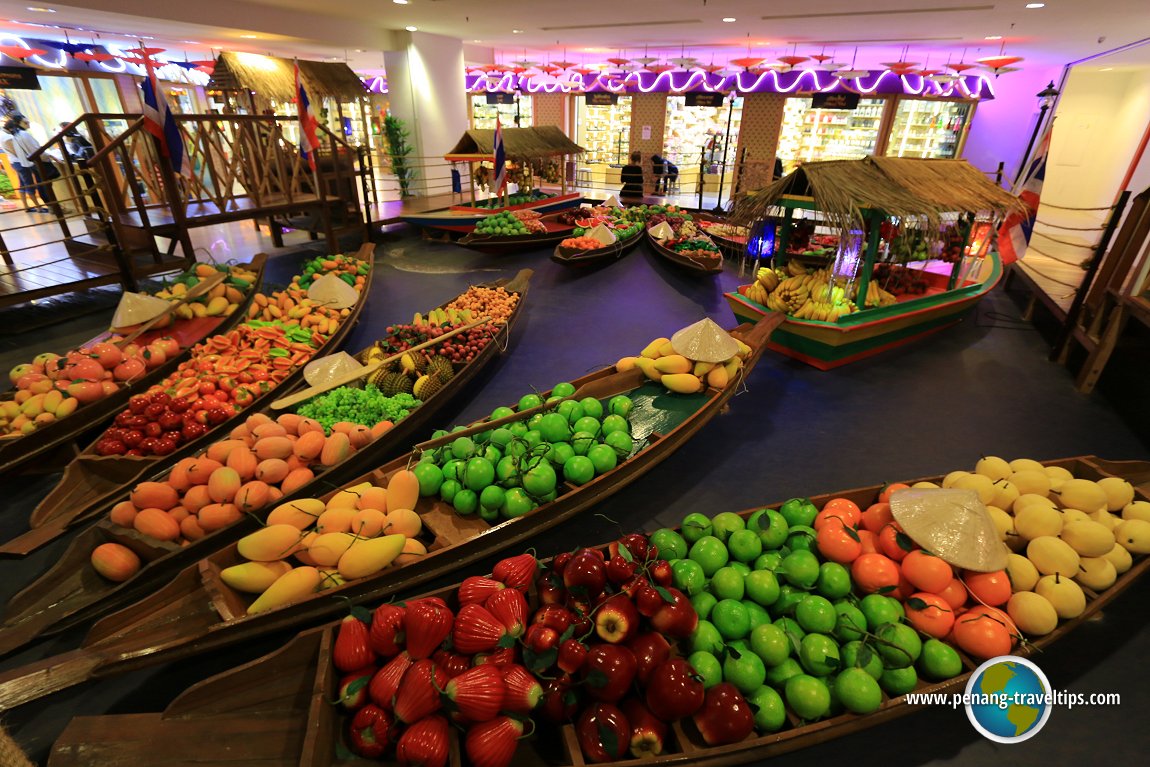 This is actually in M Mall O2O! Image from Penang Travel Tips.

An investor, Loh Keng Peng, told The Sun Daily that he was confident in MBI after investing lots of money in it and in exchange, he was given loyalty points to purchase goods. The scheme gives loads of returns a year and is believed to be the longest running financial scheme founded in Penang!

“The returns are very lucrative, even for sleeping members who invest US$100 (RM427.70) and do not recruit members. That is why people are confident of this scheme, not to mention it has been running for a long time,” said investor Andy Tan, who recruits members as part of the scheme.

A shop assistant in a store in M Mall told The Star that the loyalty points were still being accepted since the management didn’t say anything about cancelling the loyalty point system. One guy also said that his virtual money was still intact when he checked online despite the raid.

Some people were also not aware of MBI’s placement in the alert list. An investor from China, Yang Qing, said she was not aware of MBI ending up on the list as she was not familiar with Malaysian law. The same goes to some of the traders who were approached by The Sun for comment.

The mall even has an indoor amusement park, that is so.. whoa. Image from M Mall O2O.

We tried contacting MBI itself but when we called MBI’s main number, we were given its customer service number and told to call it. Tried calling that number soooooo many times but… No answer. The following morning also no answer, so we called MBI’s main number again. The person on the line took down some “details” and told us to wait for a call from their person-in charge, who didn’t call at all. Let’s just say that MBI couldn’t be reached for comment.

We also tried contacting some peeps from Penang to get some public opinions but only one source could tell us what he knows about the status on MBI. Jason (not his real name) said that this type of investment companies like MBI, MFace and Monspace are phasing out. MBI is still accepted by the public but is not reliable anymore. According to him, there have so far been no signs of money laundering but since MBI has gone under probe, his friends who invested in MBI are withdrawing from it.

This is why we need to save ourselves from such situations

While there are several reasons to need or want big money, there may be better reasons to not participate in “money games” like MBI. CILISOS previously wrote about pyramid schemes but we still wrote about it here for your convenience.

Maybe you would have heard of the terms “MLM” (multi-level marketing), “Ponzi schemes” and “chain letters”. Well, in case you didn’t know, they’re actually some of the many different types of pyramid schemes, with the two very basic types being product-based (like MLM) and non-product-based. Dr Azwan’s blog has an article listing real-life scams of different forms in Malaysia.

Why pyramid schemes are unsustainable. Image from HowStuffWorks.

Basically, the objective of pyramid schemes is to make money out of recruitment, instead of assets. These schemes recruit members at seminars, home meetings, phone calls, emails, snail mails or social media, so if anyone comes across these recruitment drives, they might think it’s legit. But guess what? It’s actually not legit but rather a disguise.

Yeah, the promoter would make claims like “this is legal” or “not a scam”. But people get tricked into thinking that by investing in something like this, they might generate more money, when they actually get NOTHING but a financial deficit. Here’s why…

Then, the new recruits become recruiters themselves and this goes on until the pyramid structure can’t take it any longer due to the limited number of people in this world. Because of this, the scheme collapses and the losers are those at the bottom of the pyramid. They not only lose their money but also their relationships with the people (family members, friends etc) they recruited who lost their money too.

Some warning signs! Image from Investor.gov US Securities and Exchange Commission.

Luckily, there are ways to spot a pyramid scheme and avoid getting trapped by one. Here are some signs of a typical pyramid scheme:

– No genuine product or service is sold:  Exercise caution if what is being sold as part of the business is hard to value, like so-called “tech” services or products such as mass-licensed e-books or online advertising on little-used websites. Some fraudsters choose fancy-sounding “products” to make it harder to prove the company is a bogus pyramid scheme.

– Promises of high returns in a short time period: Be skeptical of promises of fast cash – it could mean that commissions are being paid out of money from new recruits rather than revenue generated by product sales.

– Easy money or passive income.  There is no such thing as a free lunch. If you are offered compensation in exchange for doing little work such as making payments, recruiting others, or placing online advertisements on obscure websites, you may be part of an illegal pyramid scheme.

– No demonstrated revenue from retail sales.  Ask to see documents, such as financial statements audited by a certified public accountant (CPA), showing that the company generates revenue from selling its products or services to people outside the program.  As a general rule, legitimate MLM companies derive revenue primarily from selling products, not from recruiting members.

– Complex commission structure. Be concerned unless commissions are based on products or services that you or your recruits sell to people outside the program. If you do not understand how you will be compensated, be cautious.” – info taken from the US Securities and Exchange Commission.

The most important step is to not give in to the pressure of investing in something just because your friend or relative told you to. They most likely wouldn’t know what they’re getting themselves into, so it’s best to consult an independent financial adviser before making any investment decisions.

And one thing about investments is that returns always have some uncertainty to it, so beware of schemes that claim a guaranteed return. Also, think about whether the promised returns depend on product sales or not. If yes, then find out whether the products are of real value, reasonably priced and something that is actually used by consumers.