Whenever Godzilla rages or flaming meteors rain on Earth or aliens invade to enslave the human race, they ALWAYS target New York. Why should New York, or even Tokyo, hog all the action? Well, this time KL might be in the thick of it, as a 8.5-tonne space station hurtles towards Earth… and KL city has been listed as one of the potential crash [email protected]#*!! Wuuut? First, it was discovered that ancient fault lines in KL could cause an earthquake, now some hecking space station is gonna destroy KL? Why us? Go back to New York. GET GONE.

What da heck is this space station? The space station, Tiangong-1 (translated as ‘Heavenly Palace’), is China’s first prototype space station, launched on 20 Sep 2011 from Jiuquan, Gansu Province. It was built as a sort of ‘potent political symbol’ of China (read: show off power), part of China’s ambitious scientific push to become a space superpower, coz you know, being an Olympic superpower is too mainstream already by their standards. China is the third country to launch a space station after Russia and the US.

Tiangong-1 was used for both manned and unmanned missions – it served as a laboratory, as well as an experimental test site for space rendezvous (manouevering 2 spacecraft to a very close distance) and docking capabilities. Its main objective is to research the effects of long-duration spaceflight on the human body.

It was also visited by the country’s first female astronaut (or taikonaut, as they call them in China), Liu Yang, in 2012, where she did taichi! Check out her moves below:

BUUUUT then in 2016, Chinese officials officially officiated that they lost control of the space station and notified the United Nations that it would crash to Earth somewhere between October 2017 – April 2018. Since then the station’s orbit has been steadily decaying and in recent weeks it has gotten closer to Earth’s atmosphere and started falling faster. Right now it is estimated that the spacecraft is 300km away from the surface of the Earth. NOOOOOOO 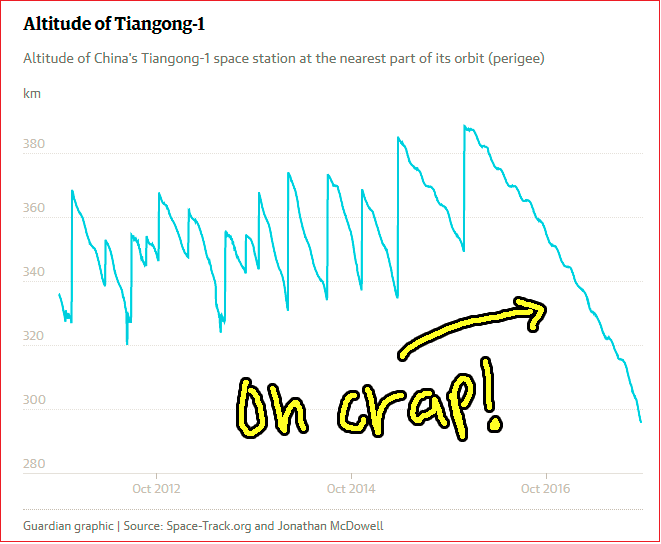 Original chart from The Guardian

As you probably know by now since it has been reported in the news, KL has been identified as a potential crash zone along with these other cities, according to Aerospace Science and Technology, the European Space Agency (ESA):

Uhh, at least the odds are evened out. And we’re not alone. Maybe we can start like a support group or something on Facebook. Oh crap, is it really going to hit us?

Now for the important question – are we going to die? Maybe not, maybe yes. Ok, here’s what we know now – when the space station enters Earth’s atmosphere (now say the last 3 words 10x faster), it’s not going to remain an 8.5-tonne killing machine. Much of the craft is expected to burn up in the atmosphere, although some components that were built to withstand extremes in temperature might survive the plunge, explained China’s manned space agency’s Deputy Director Wu Ping.

“There will be lumps of about 100kg or so, still enough to give you a nasty wallop if it hit you.” – Jonathan McDowell, astrophysicist at the Harvard-Smithsonian Center for Astrophysics, The Guardian

Basically, he’s saying that it would not cause the entire city to explode and become a giant crater, however a 100kg object falling from the sky, with gravitational pull and all would still do some damage to somebody’s house, somebody’s cow, somebody’s head, etc. 100kg is half of Harambe’s weight (200kg)… or CILISOS Editor’s full weight, for comparison. That would make an impact! Ori image from eco-business.com

China told UN’s Committee on the Peaceful Uses of Outer Space (wow such a thing exists) in May that they will carefully monitor the craft’s descent and inform the UN when it begins its final plunge. Predicting where it is going to come down would be impossible even in the days ahead of its landing, Jonathan McDowell said.

He added that a slight change in atmospheric conditions could nudge the landing site “from one continent to the next”. So, it’s a lil comforting to know that it would not 100% land in KL or Malaysia.

NASA and other space agencies say it’s very hard to compute the overall risk to any individual, though numerically, the chance that one person anywhere in the world might be struck by any piece of space debris comes up to a chance of 1-in-3,200, said Nick Johnson, Chief Scientist with NASA’s Orbital Debris. Other sources say 1-in-a-trillion. Phys.org assured that Tiangong-1’s debris has a higher chance of falling into an ocean, since 71% our planet’s surface is covered by water.

That’s what the experts say la, but got guarantee onot wan?

In the entire history of the space age, 2 people have been struck by debris In fact, there have been many uncontrolled re-entries of spacecraft larger than Tiangong-1 itself. During the past 50 years, an average of one piece of space junk falls back to Earth per day.

Nick reminded everyone that throughout the entire history of the space age, there have been ZERO reports of anybody in the world being injured by re-entering debris. BUUT one chunk narrowly missed an American woman once. Read on to find out…

Russian 3.8-tonne reconnaissance satellite Kosmos 954 was launched in 1977. When the satellite reentered the Earth’s atmosphere the following year, it scattered radioactive debris over northern Canada, prompting an extensive cleanup operation known as Operation Morning Light. In fact, the radiation was more dangerous to humans than the fall. Reportedly it could cause death to anybody that came into direct contact with it for a long period of time. NASA’s ginormous 77-tonne Skylab space station came hurtling down almost completely uncontrolled with some large pieces landing outside Perth, Western Australia and the Indian Ocean. Since it was so big, it could accommodate a shower for astronauts. Hilariously, Australia fined NASA A$400 for littering, which went unpaid for 30 years, until 2009 when radio host Scott Barley raised money on his morning show and paid the fine on NASA’s behalf. In one of the only known cases of a people actually being struck by space junk, a piece of a Delta II rocket hit Lottie Williams, an Oklahoma woman, who was taking a walk and felt something brush her shoulder. It turned out to be a small piece of woven metal that weighed no more than an empty soda can. Lottie was not injured, though there were reports that same night of a 580-pound fuel tank that narrowly missed a farmhouse.

That same year, a woman in Turkey was hit in the head by a lightweight piece of charred woven material, which was also identified as a fragment of Delta II, though luckily she was also not injured.

Space shuttle Columbia’s descent was a tragic one. It was completely destroyed upon its reentry into Earth’s atmosphere, killing all 7 crew members inside and shedding thousands of pieces of debris in Texas and parts of Louisiana, but didn’t kena anyone on Earth. More than 80,000 pieces of debris were recovered and stored for further research. Fragments of Columbia in Texas. Image from csmonitor.com

For more cases of falling space junk, read here and here. In all these events, their crash sites were difficult to predict, and where calculations were made, there were errors, so debris has landed in areas it was not expected to land. What we’re trying to say ultimately is, when they say KL could potentially be a crash site, take it with a pinch of salt.

Still scared? Here’s where you can monitor the space station’s patterns

Honestly, why don’t governments just send fighter jets to pew-pew Tiangong-1, like how you would play Space Invaders? That is some weirdass looking jet plane. Ori image from vincognito.co.uk

If you are still worried, there are sites you can Google, such as Heavens-Above, Satflare.com, or n2yo.com, that provide tracking information anywhere around the world. Just input your specific location and click on ‘Tiangong-1’, listed under ‘Satellites’. They’re great for being able to see satellites like the International Space Station and Hubble, as well as astronomical objects like planets and asteroids.

Despite being able to track Tiangong-1, as well as knowing its location and orbit, it is not the same as being able to say exactly when and where it will fall to Earth la. So, guess we’ll just have to see.