We think it’s impossible for most Malaysians to not have heard of Jamal Yunos by now. If you haven’t it’s most likely because you might know him more as the Red Shirt Rally guy… you know, the guy who’s been getting many Malaysians seeing, well, red with his antics. Really, there hasn’t been someone so associated with the color red since Bono with the Product (Red) campaign. But in case you were wondering, which we really hope you were since we’re telling you anyway, Jamal Yunos was one of the organizers of the Red Shirt Rally held on September 16th (Malaysia Day). The rally kinda ended on a less-than-peaceful note when the police had to watercannon protestors who tried to get into Petaling Street despite given warnings not to, which Jamal Yunos later attributed this to protestors showing dissatisfaction at a sign at the entrance barring them from entering. That’s Jamal in the center, waving his hands in the air like he just don’t care. Image from The Star.

He then urged the authorities to ensure that Malay vendors be allowed to operate in Petaling Street in order to “not be racist” and to crack down on counterfeit and illegal items being sold. He later warned that if the authorities didn’t take action on the sale of the contraband goods, the red shirts would stage another rally on September 25th.

Jamal Yunos was arrested on September 25th and released a day later, when he posted this: We happened to look at the comments and what we saw blew our minds because they were totally not what we expected. Malaysians of all races came together to criticize the heck outta the picture and his message from every aspect imaginable; from the sarcastic to the even more sarcastic. To give you an idea, we grouped them into several categories, starting with…

Content warning: Some of the comments might be crude in nature. We censored off what we considered to be cuss words, but some readers may still find the language offensive.

Apparently Malaysians are quite the fashion fabulous since many comments have been on his prison appearance, such as…

Orange is the new red

It seems that many commenters familiar with color mixtures have pointed out the coincidental coloring of his prison jumpsuit, since Rally Red + Bersih Yellow = Go To Jail Orange.

This is your look dah-ling

Some also complimented him on his look, saying that he should keep the style because the orange jumpsuit look suits him really well.

Apparently Jamal Yunos’ pity-inducing barefooted appearance didn’t go unnoticed, as was the pair of slippers next to him  🙄 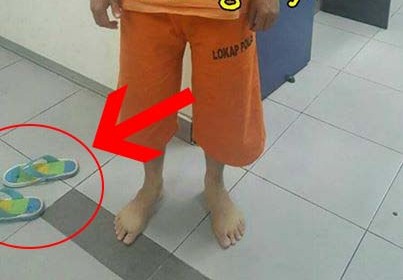 You might say the slippers were two feet away. Hur hur hur.

2. The snap back to reality oh there goes gravity commenters

If Jamal Yunos really does, with all the sincerity of his heart, think that he’s doing the country and/or Malays a favor; these types of comments would be a pretty unpleasant alarm clock since they’re saying…

There are far bigger issues at hand These commenters note that Jamal has missed the larger issues at hand – such as GST, our economy, 1MDB, etc etc etc – with his current agenda. Although we try our best to keep from pointing out specific races and religions, it really should be noted that many Malay Muslims (as exemplified by the screenshots above) have given him the waggy finger of disapproval for claiming to be a warrior of Malay rights, and for further fueling racial tension.

Errr… we don’t actually support him.

NAH, BACA:
4 Ways RedShirts are similar to BERSIH (And 4 ways they're not)

Surprisingly (or not) enough, not all Malays are in support of Jamal Yunos or the Red Shirts.

We expected to see a lot of macai comments on the photo, as can be expected based on our experience with a certain Prime Minister’s Facebook page. However, we were quite surprised to not see any until…. Yup, for about 300 out of the 1,700 comments at time of writing, this was the only possible macai account that we spotted. Mostly because it was called out by the other commenters. We highlighted her (?) comments in fuchsia: Although, we don’t know which is better… the Fake Macai or the comment that followed.

While some commenters decided to give Jamal tips to appear more genuine in order to invoke pity and support,

We do hope this advice is followed though, otherwise we’ll be expecting a Red Pants Rally in the future.

Okay to be fair, both of these comments aren’t particularly accurate nor are they representative of the “berjuang untuk rakyat” designation but… those Likes tho’ We probably don’t need to mention this again, but Altantuya didn’t really die fighting for Malaysia. And Anwar is only a pejuang if you sit on the Opposition side of the fence.

And what’s a Malaysian politician’s comment thread without trolls? There are tons of them, but we decided to highlight some of the ones that made us LOL (your sense of humor might be different): For context, the “bakar ikan sampai hangus” comment was in reference to one of Jamal’s businesses: Ikan Bakar Sekinchan. The restaurant chain has been the subject of a boycott since 2012 due to accusations that he profited from his anti-Bersih campaign; where those who Liked the FB page and spent a minimum of RM50 at a Ikan Bakar Sekinchan would stand to win either a 5 Series BMW or a Lamborghini Gallardo. There’s a Facebook group dedicated to reporting the number of outlets that have closed down, if you’re interested.

Of course, not everyone is as direct, mean, or trolly in their comments. Some actually took the effort to pay him a compliment or to speak to him with the wide-eyed idealism of youth in order to bring their points across:

We would like to note that these are the most rare.

And that’s the comments thanking him

Despite all the bad press he’s getting, maybe Jamal Yunos shouldn’t be villainized as much as he is. You can definitely check it out for yourself here, since we had to censor the names due to privacy concerns but we note from our observation that the commenters were:

So yea, you might say he somehow managed to bring Malaysians together quicker and more effectively than any government framework has in recent years.

Unedited image from The Malaysian Times.