You youngsters these days. Tsk. Probably never bought a CD. Or *gasp* a cassette tape. In fact, you probably have no idea why iTunes (Spotify?) got that funny virtual album covers on screen. Like why music need art? But you like it right? It’s as if our cicak brains have no choice but to link the two together. 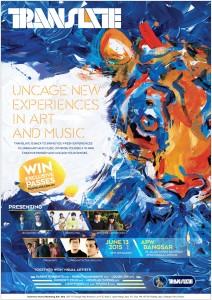 It is on this basis that Tiger Beer sponsors this music+art festival called Tiger Translate, every year – that combines arts and music with Eastern and Western elements. This year, the festival is on June 13th 2015 at APW Bangsar. Buuuuuut, it’s INVITE ONLY.

Luckily, CILISOS and TIGER Beer are like totally BFF! So If you want to win tickets, just scroll to the bottom of the article! Click on the image to watch the full vid

Some of those acts sound dem hipster wei.

Yea, there’s gotta be like a random name generator for hipster artists n bands (OMG there is!).  BUT what IF RIGHT… your current hipster album covers aren’t really as ORIGINAL as they seem. What if our nenek datuk were way way more hipster than you?
Did you know Malaysia actually had a thriving music scene of its own in the 70’s, 60’s, yes, even way back in the 50’s? We had singers like P. Ramlee, Saloma, Sudirman Arshad… And it wasn’t just solo singers. We had bands too, like The Strollers, The Jayhawkers, The Sangam Boys. Using the power of Google, we compared some of our old album covers of Malaysia’s yesteryears to today’s hipster equivalents, showing you that they can totes pass of as hipster album covers of today.

It’s like he’s saying, “I am danger.” Images from rateyourmusic.com Creepy super-villain sunnies and ridiculous hand-on-face pose aside, Frankie Cheah is said to have sung with perfect diction and a strong, clean voice… but apparently not songwriting skillz. He was a romance ballads kinda guy who covered songs, something like Boyce Avenue (Thanks to this nostalgic blog run by Andy Lim, a Singaporean who used to front bands in the 60’s himself).

Frankie’s name got popular not just in Malaysia, but in Singapore as well coz he was right across the island in Segamat, Johor Bahru. We think it probably blew across the Causeway because…. His Name is Wind mah.

Or it coulda been a calculated move since…He was a Maths teacher! Wahlao hipster Level over 9,000, this one.

If Frankie was #swag, Rocky is #superswag. Image from singapore60smusic.blogspot.com So apparently, Wind was a big thing back in the day.

Rocky Teoh was the Malaysian version of Elvis Presley, which we assume means he got laid quite a bit. Born in Taiping,  he loved singing since he was a boy and was winning Elvis contests throughout the country before he turned 18. At 19, a local recording company signed him up and the result you see are the album covers above.

Surprisingly tho, King Drummer and Cool Wind were both said to have more of a lounge feel than rock n’ roll. King Drummer was actually based off a popular Chinese soundtrack from a famous movie of the same name. Have a listen here.

Oh and his full name was…TEOH BENG HOCK (!!!!). If we’re not making sense our article here will explain the connection.

Omg colours of the universe! Images from karyangan.com 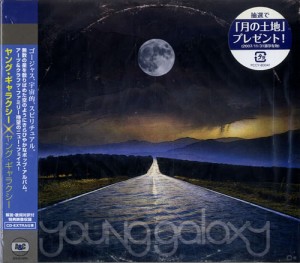 The Strollers was a psychedelic SUPER MUHIBBAH rock band, formed in Petaling Jaya, in 1965. Angmoh got (Jimmy D’Olivero, Michael Magness), Chinese got (Billy Chang), Malay got (Hassan and Hussein Idris) and India also got (Nand Kumar). And Malaysians LOVED them. Hussein recalls:

“We had screaming fans waiting for us at the airport in Kota Kinabalu. It was crazy. It was like a sea of people, waiting.” – Hussein Idris, The Strollers drummer, The Star

‘Waiting Is…’ became their most successful album. It was even given a shout out by a Spanish label, which described it as ‘one of the best psychedelic albums ever recorded in Asia’.

Also, if you’re waiting for the end of the title then you need to learn this joke first.

Oh, and if you think all this band sudah hang up their cape, you’re wrong because The Strollers are still rocking out. Today, they’re known as The Strollers 2, although they may have replace their capes with…….strollers. Yea, vintage is relative. In 30 years, your Prius can be hipster album cover.

Way back inRudyn al-Haj‘s time – they had to go find a MUCH older vehicle. Look closely and you’ll see the number plate says ‘1907 Model R’. You might think that the R stands for “Retro,” but this is beyond retro you coffee-drinking hipster you…. that’s antique. The song, which was written and composed by Rudyn himself, is seriously catchy and could EASILY pass off as a hipster Malay band from 2015. Click here to listen.

His band, Impian Bateks has another album with equally awesome art cover. Recurring themes in their songs were typical teen angst and schoolgirl crushes. Pen pals were common in the days before email and social media, so that explains the album cover. 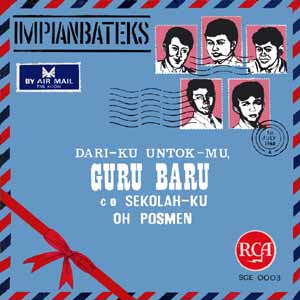 Incidentally, this music category was called the pop yeh yeh music scene. Pop whaaat? Pop yeh yeh is sorta rock’n’roll but BM and was hugely popular in Malaysia, Singapore, Brunei and Indonesia back in the 60’s. The weird name’s reason quite potong stim tho – it’s from The Beatles’ lyrics “She loves you, yeah, yeah, yeah”. Fronted by A. Romzi, The Hooks were yet another pop yeh yeh, who’s claim to fame was an appearance a 1969 Malaysian film Mat Toyol. Their other claim to fame was THIS newspaper clipping stating that their song from their debut album Dendang Remaja, got banned on radio for unsur-unsur dodgy! But when we listened to the lyrics, it didn’t seem like there was anything wrong with it, much less any references the dodgy. Here are the offending lyrics: Screenshot of song lyrics from arkibnegara.blogspot.com

Maybe it’s the “Kata kawan-kawan sungguh istimewa, tapi tiada berkesan dan tiada juga ku rasa” part? Big deal, they could have been singing about a cough drop. Besides, it was the innocent 60’s… there was nothing happening during that time that could- Nevermind. Amazingly, The HOOKS still have a Facebook page created by fans. So this couple literally started the whole pop yeh yeh culture in Malaysia. In 1964, M. Osman released a track called “Suzana” (click to listen) which made M. Osman an overnight sensation. In fact his wife related a story in 1964, where the two of them were locked in their room and protected by police from the humongous crowd at Stadium Negara:

BTW, not to be confused with Aziz M. Osman, director of XXRay. We checked. Not the same dude. (BUT APPARENTLY HIS SON OMG! Thanks Wazida!) We saw Tonic Chop Gajah, laughed for 15 seconds, then laughed some more. But the jokes on YOU cos it isn’t really that random! Tonic Chop Gajah was basically the Gatorade of the 70’s, although it’s really random that a band would tusk themselves to make a song out of it. Their blogspot website makes us wanna stick to Gatorade tho

Under the initiative of the singer Halim Yatim, The Sangam Boys was formed in 1964. It’s not their surname so we’re thinking either it was the popular Hindi movie, Sangam, or because “Sangam” is a Hindi word for two rivers that join to make a big river, much like the musicians that joined to form a… big musician? #logicfail

Speaking of random, the song itself sounds like a bunch of guys had a bit too much to drink (vodka tonic cap gajah maybe?) and decided to do a commercial jingle (they even spell it for you – T-O-N-I-C, C-A-P). Not the sorta thing we’d listen to in the office (although of course Uihua liked it). Today’s hipster equivalent: Of Monsters and Men, My Head Is An Animal (2011)

Even the 90’s were weird. When we saw this, how could we not add this in as a bonus?! It’s not an old 60’s band, but Kah Keh Keh released in 1998 is a collection of funny songs by Maidin, Piee, Non and Chick, Rockydin, and Omar Hashim. Pretty hipster cover too for the Malaysians of the 90’s. Photoshopping some guy’s face on a woman’s body, not to mention the psychedelic colours.

Neutral Milk Hotel’s album In The Aeroplane Over The Sea used some old postcard and plonked a tambourine over the woman’s head. To see the original postcard, click here.

Phew. We said the word ‘hipster’ in this article so many times (about 37 times actually) until wanna drink some Tonik Chop Gajah already. But we’re not done yet!

Think you can think of better hipster equivalents to these? Then UWINZ Tiger Translate 2015 TICKETZ! Remember that contest we mentioned earlier? Well if you’re interested in free tickets to Tiger Translate 2015, read on!

Ticket price: Priceless, cos this event is INVITE-ONLY!

Tiger Beer wants to give 20 CILISOS readers TWO pairs of tickets each! Uh huh, …your Saturday night party with friends kautim already lor. Just find a current hipster album that compares to any of the vintage albums above, and fill in the form below. The best 20 entries win!

Check out some of the entries we’ve had so far 🙂