Ever since we were kids, we’ve loved those magical moments when wishes came true. All Disney’s fault la! Like Pinocchio’s wish to become a real boy came true when some freaking Blue Fairy waved her wand. Or when Wendy, John and Michael started flying with little pixie dust and happy thoughts. And OMGGGG, who wouldn’t want Aladdin’s lamp? Give it a rub and some hilarious, blue Genie pops out to grant your every wish!

But guess what, there are actually organisations that grant wishes (omg, where can we submit requests??), BUUUT for kids la. For example, there is the Make-A-Wish foundation and Children’s Wish Society, that exist to make the dreams of children with life-threatening illnesses, come true. Here are the 7 AWESOMEST wishes Malaysian kids made.that.came.true!!

1. I wish I could meet a Manchester City footballer Murkeish (11) got to walk with his fave football star onto the field before Manchester City’s match against Chelsea. Image from The Star

Some people take ages to save up before they have enough money to watch a football match in England, but 11-year-old Murkeish Krishna Murthy, who suffers from leukaemia, had his wildest dream come true when he got to fly business class to Manchester to watch a match between Manchester City and Chelsea! Not only that he walked his favourite footballer Sergio Agüero onto the field and got to be the Match Day Mascot.

“I told Sergio to score a goal for me and he scored the first goal in the match,” he said. “People told me that it was my luck and presence there which made him score.” – Murkeish

2. I wish I could meet Justin Bieber 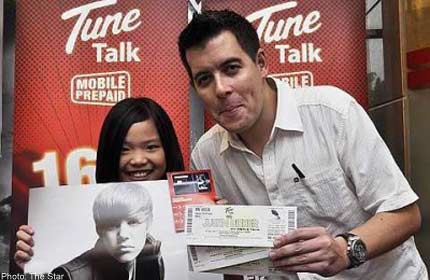 We know that’s not Justin Bieber, it’s Jason Lo, CEO of Tune Talk, who GAVE her the concert tickets to go see Bieber. Image from news.asiaone.com

The custody battle for 12-year-old Low Bi-Anne between her dad and mom in 2011 wrenched the hearts of Malaysians. Her mom who is staying in London initially won custody, but Bi-Anne refused to leave her dad. Every day that she stayed with him, her dad had to pay a heavy RM400 fine (total he paid RM72,000).

It’s always hardest on the kids when parents go through a split, so to help her forget her worries for a while, Tune Talk arranged for the Belieber to meet her idol Justin Bieber! She got three concert tickets worth RM498, a Bieber t-shirt and BEST of all…a meet-and-greet session with Bieber.

“I don’t think I can sleep tonight. When I meet him I want to hug him and shake his hand. I will never wash my hand again after that.” – Bi-Anne

*In 2012, Bi-Anne’s dad won full guardianship rights and she is just the happiest kid thanks to the court’s decision.

3. I wish I could go to Australia to see dolphins Adriana wished that she could play with dolphins. Image from makeawish.org.my

Who wouldn’t wanna play with dolphins right? That was exactly what Adriana, 9, had been wishing for, for almost one year. But finally in Gold Coast, Australia, alongside her family, she got to pet a dolphin in Sea World. Even while having the best time of her life, the grateful little girl sent photos to her wish granters at Make-A-Wish Malaysia.

4. I wish I could be Princess Elsa Every little girl dreams of being a princess and 10-year-old Qistina (who has a rare type of primary brain or spinal cord tumors) knew one princess she definitely wanted to be is Princess Elsa in Frozen. Finding a dress for her height almost made her give up her dream, but on her wish day, she got a dreamy, blue dress that was custom-made for her, and she got to ride like royalty in a limo to i-City in Shah Alam.

Of course she went to SnoWalk (currently Malaysia’s biggest winter wonderland). And throughout the day other kids crowded around wanting to have their photo taken with ‘Princess Elsa’. Would that make a girl feel like royalty or what? Make-A-Wish Malaysia receives lots of princess wishes (and they mostly gravitate toward being Princess Elsa, hehe).

5. I wish I could fly in a helicopter Shahrul dreams of being a helicopter pilot or firefighter. Image from Make-A-Wish Malaysia

Shahrul, a brave eight-year-old who’s battling leukaemia, got his wish to fly in a helicopter. The day started out with him and his family checking into their hotel room with flight theme decorations. On the wish day, Shahrul was given his own Captain’s uniform before meeting his co-pilot, strapping in and then lifting off to an amazing flight over KL. It doesn’t end there…Shahrul still also to try out an A380 Flight Simulator.

Another little boy Yusaidinnor Bakari wished he could fly in a helicopter. The 6-year-old kid who was diagnosed with retinoblastoma (a type of cancer that begins in the eyes) got his wish granted by The Children’s Wish Society and the Sabah police. So along with his mom Maimunnah and Sabah Deputy Police Commissioner Datuk Awang Sahari, up he went in the chopper, flying over Kota Kinabalu. Yusaidinnor and his mom in the chopper. Image from New Straits Times

6. I wish I could be a firefighter and a cop

Haris got to a firefighter hero for a day. Image from Make-A-Wish Malaysia FB

Remember as kids we would dream of growing up to be firefighters and cops? This kid actually got to live out his ambition to be a firefighter for his birthday, complete with uniform and all! Doesn’t he look cute in it?? 6-year-old Muhammad Haris Wafiq Mohd Hawary who has cancer, was taken on a fire truck ride, played a giant game of ladder-and-snakes and took photos with his heroes.

Same for Rayyan Seif Rizqin Mohamad Shukor who dreams of growing up to be a policeman. At home he would play cops and robbers with his sister and cousins, but his wish came true when he got play a cop with his adorable uniform at the Damansara Utama community police station. Rayyan helped with the arrest of two “snatch thieves” (LOL played by an engineer and construction manager). Rayyan listening to instructions from a senior officer. Image The Star

7. I wish I could meet my favourite Korean boy band Chemotherapy was tough on 13-year-old Lee Qiao Siew who had leukaemia. During these moments, listening to EXO (a Korean boy band) gave her strength and made her able to forget the pain. So naturally the fangirl badly wanted to meet EXO when they came to Malaysia for their concert. Make-A-Wish Malaysia coordinated with their Korean branch to make Qiao Siew’s wish come true.

On the day of the concert, Qiao Siew was brought into the waiting room to talk to her music idols and take pictures with them. Beats having a normal poster of the the boy band by a mile!

Know a kid who is badly wishing for something? Send it to these wish granters… If you know a kid who wants something so very really badly, YOU can help his or her dreams come true, by sending in a request to Make-A-Wish Malaysia or Children’s Wish Society of Malaysia (CWS). But bear in mind, some organisations only take requests for children who are terminally ill. Others perhaps grant wishes from orphanages or poor and needy children.

Or if you’re the person who likes to be in on the fun action, you could help the organisations fulfil children’s wishes. To date Make-A-Wish Malaysia has granted 291 wishes, while CWS has granted more than 600 wishes. How can you get involved? Well, two ways – you could be a wish granter or donate to them.

So if you’d like to volunteer, you can click here to submit an application to Make-A-Wish Malaysia. But if you would like to submit a kid’s request, check out the steps HERE. For CWS, email [email protected], or call 03-5632 4941. As one volunteer described her experience:

“Ultimately, even if it doesn’t amount to anything physical, a little bit of your kindness or friendship is equivalent to giving somebody an entire world. We have more than we could ever want, why not share it with others?” – Alexa and Alia Abishegam, Make-A-Wish Malaysia volunteers