DISCLAIMER: If you are afraid of bugs, this is NOT THE ARTICLE FOR YOU. Some of the images here may make you think twice about stepping outdoors again.

Mother Nature is truly wondrous. She works with such beauty and majesty, creating breathtaking wonders such as tulips and waterfalls and Lisa Surihani everywhere we turn. Just gaze upon the majesty of a sunset, or upon the beautiful hues of a flower petal. Perhaps Mother Nature was in love when she created them, so magical they are!

Her insects, on the other hand, were probably made after a bad time-of-the-month or a nasty breakup. Because, ye gods, look at them. Terrifying appendages. Sinister murder methods. Nastier eating habits than the patrons of discount Ramadhan bazaars. Malaysian insects are HARDCORE. 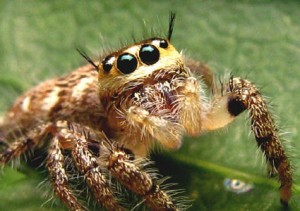 The Jumping Spider of Sabah. Isn’t he cheery? Picture from wongchunxing.com

In this article, CILISOS goes  into the depths of the Malaysian jungles to uncover some of the most nightmare-inducing local insects we could find. And hoo boy, we found a few contenders.

(Our criteria: it would have been easy to just fill this article with the ugliest Malaysian bugs we could find, and our local spiders would have taken half the list. But we don’t believe in judging solely by appearances, which probably explains some of the writers in our employ.

Instead, we’re looking at bugs that were not only weird-looking, but possessed unusual traits or habits that scared us. Which means we did not include things like the stalk-eyed fly, whose only claim to fame is that its eyes are freakishly far apart from each other.) 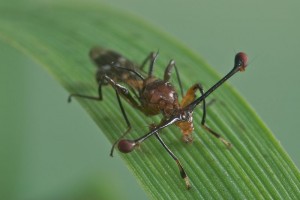 1. The Assassin Bug Wears its Victim’s Dead Bodies Like A Fancy Coat 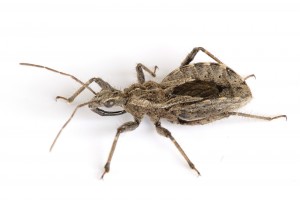 You think this bug is creepy? Oh you have no idea. Picture from oldschoolheretic.blogspot.com

They say that the smallest things are the deadliest. Anyone who’s read about the atom bomb or accidentally bitten into a cili padi can testify.

And this holds true in the insect world. At less than 1 cm, the Assassin Bug is one of the smallest bugs on this list, but is also one of the most disturbing. When an Assassin Bug encounters its prey, it injects it with a special enzyme in its saliva that dissolves and softens its guts so they can be sucked out of their shells. That’s right, it drinks its victim’s liquefied innards like it’s air kelapa. That’s stone cold.

But that’s not the worst part of this story. Oh no. After it’s done, its victim’s exoskeleton still remains. And the Assassin Bug isn’t going to let that go to waste. What does it do? Using a sticky secretion, IT ATTACHES THE BODIES TO ITS BACK. Sing with me! “Recycle! That’s what you do! Recycle!” Picture by Mohd Rizal Ismail via Flickr.

That’s right. This is an insect version of Cruella DeVille from 101 Dalmatians. 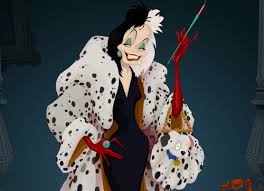 Noone cares about murdered animals if they aren’t adorable, right? Picture from movieweb.com

The Assassin Bug can stick up to 20 dead bodies on itself, which it uses as armor and also as a method of confusing its foes. It’s also probably considered the height of fashion in the insect world, but what do we know? 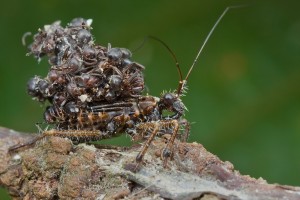 2. The Ninja Slug Will Shoot You With Chemicals Until You Love Him

When it comes to courtship, there are many ways of winning over your beloved. You can use flowers and heart-shaped boxes of chocolate. You can serenade her and take her on dates. Or you can fire darts at her until she gives in to your advances.

Such is the modus operandi of the Ninja Slug, the date rapist of the bug world. Male slugs shoot their potential mates with hormone-spiked darts made of calcium carbonate, in a bid to increase reproductive success. 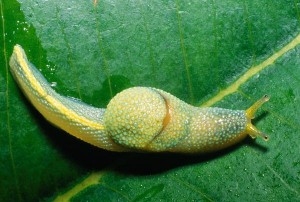 If you take the shell off a snail, does it move faster? No, it becomes sluggish. Picture by Peter Koomen, taken from nationalgeographic.com

Yeesh. And we thought Facebook stalking was creepy. The slug was almost named ibycus Felis, due to the slug’s cat-like habit of wrapping their tails around them as they slept. Instead, the scientist who discovered it decided to name it ibycus rachelae, after his girlfriend. Which is…romantic, we suppose?

We were sadly not able to discover if the scientist won Rachel over by shooting her with love darts.

3. The Horsehair Worm Possesses Minds and Makes Them Commit Suicide 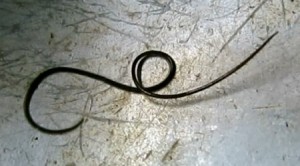 I iz in your heads, drinkin ur water. Picture by Murphy Ng via mysabah.com

Oh God, this worm. Looking at it, you may mistake it for a shoelace, or a loose strand of mee. DO NOT BE FOOLED. That little strand is a MIND-CONTROLING PARASITE.

The larva of the horsehair worm enter their hosts (which are usually grasshoppers and other insects: no humans yet, thank God) through hooks on their bodies, and develop inside them, growing slowly to maturity. Not creeped out yet? Good, because the worst is yet to come. Once the larva grow into adults, they need to return to the water. But they’re still stuck inside their hosts.

So what do they do? Crawl out and make their way to the local swimming pool right? WRONG! 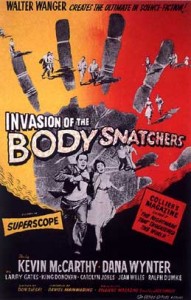 These little Alien rejects emit some sort of neurotransmitter to brainwash its hosts, persuading them to go DROWN THEMSELVES. Once submerged, the worm leaves its host’s body, to leave happily ever after.

Horsehair worms can be found in many places, with local blogger Murphy Ng posting a video of a discovery of them in Long Pasia, Sabah (scroll all the way to the bottom.

4. The Vampire Moth Vants to Suck Your Blood, Mvahaha 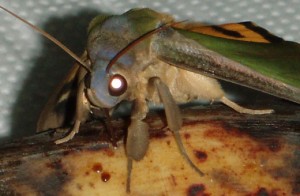 The only way to defeat him is through Moth-al Kombat. Finish him! Picture from itsnature.org

Moths are probably the Kylie Jenner of the insect world: beautiful and fascinating, but often overlooked over their prettier relatives. Everyone is always “ooh butterfly” this and “ooh butterfly that”, leaving the poor ignored moths to hang around candle flames until they catch fire and die.

Well the vampire moths aren’t going to stand for that. No playing second fiddle for these little Draculas. They’ve developed a taste for blood, which they take from mammals after penetrating their skin with their special hook-laden proboscises. 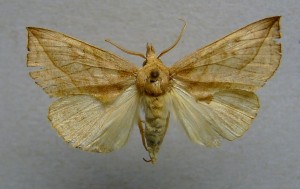 A subspecies of the Vampire Moth up close. Picture by Dumi via WikiMedia Commons.

Vampire moths can feed on humans, although cases are rare, with the first recorded incident taking place in 1999. Human skin penetrated by the vampire moth will turn red and be sore for a couple of hours. We do not think, though, that it will make you sparkle in the daylight, or make you allergic to garlic. Which is a blessing: how will you be able to eat sambal belacan afterwards?

Also note that unlike mosquitoes, it is only the male vampire moths that drink blood.

A fascinating fact: while the vampire moth was native to Malaysia and southern Europe, they have recently been seen in northern Europe as well. Which can only mean one thing. 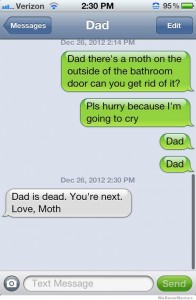 This is like, totally legit. Trust us. Picture from weknowmemes.com

The vampire moths are on the move.

And they are coming for you.

5.The Orchid Mantis is Beautiful Yet Deadly

After all those ugly, creepy bugs, it’s time for a little variety. Lets look at some pretty things for a change! Such as these orchid mantises cosplaying as pretty flowers. 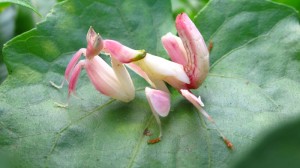 A real man(tis) is not afraid to wear pink. Picture from portwomanteau.tumblr.com 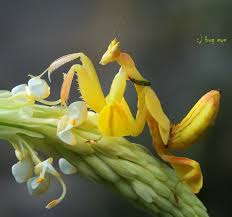 Yellow is all the rage in Paris now I hear. Picture by Bug Eye via 500px.com

We have to admit, they’re good at it. Some of them are so pretty we’re starting a feel a little confused ourselves. Our kids would either be really gorgeous or really freaky. Picture from biologypop.com

Imagine how the insects feel though. Most of them think they see a flower and get ready for some sweet pollen threats, only to have their heads ripped off and be eaten. It’s like ordering a pepperoni pizza, only to have it lunge at you and tear you apart.

Some of these mantises are apparently even better at attracting insects than actual flowers! Which is the insect equivalent of the ladyboys looking prettier than actual women.

Relatives of the orchid mantis are the Malaysian dead leaf mantis: 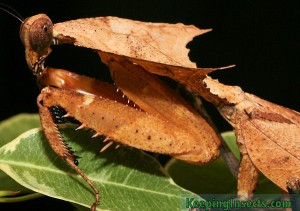 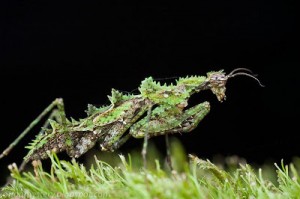 It clearly doesn’t like the Rolling Stones, then. Picture by Kurt(Orionmystery) G via thefeaturedcreature.com

There is also it’s complete opposite, the bird dropping spider, which well, lives up to its name. 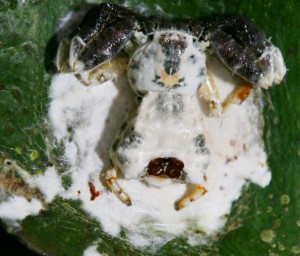 They really should make a romantic odd-couple comedy where an orchid mantis falls in love with a bird dropping spider. They could be played by Jennifer Lawrence and Jack Black.

6. The Trapdoor Spider Brings Death from Below Malaysian trapdoor spiders are a combination of these two. Why are they hipsters, you ask? Because they stray from the mainstream so much they are literally underground.

That’s right. Instead of spinning webs on branches like normal spiders, these trapdoor spiders construct nests in the earth, complete with trap-doors and trip-lines. The front doors of these nests are trapdoors, with 6-8 signal threads or trip wires radiating out. The spider waits patiently with one leg on each thread, possibly sewing patches on its eight legged-jeans and listening to Arcade Fire in the meantime. Should prey trip the wire, the spider rushes out, catches the victim and runs home to eat it, slamming the door in the process. “Andrew Garfield got nothin’ on me.” Picture from virtualmalaysia.com

That’s right. This is a spider who operates an underground murder dungeon.

Thankfully, these spiders are extremely rare, hanging out only in particular Malaysian caves. See what I mean about them being hipsters?

7. The Cave Centipede is Many Legged Horror Incarnate

OH. GOODNESS. WHY. OH WHY. Picture by Chun Xing Wong via Projectnoah.org

Okay, I must confess that I put this here mostly out of personal phobia. I HATE CENTIPEDES. I mean, look at that. Look at all those legs. Imagine that crawling  up and down your skin. The thought just makes me feel queasy all over.!

The bad news is that Malaysia has many centipedes, and not just in caves: there is even a CENTIPEDE TEMPLE in Seremban! I am crying as this picture uploads. WHY. OH WHY. Why did I become a journalist again? I should have stayed in law school. Picture from travelinmalaysia.com

One of the most prominent local centipedes is the Malaysian Cherry Red Centipede. To whoever named this centipede: Damn you. DAMN YOU A THOUSAND TIMES! ‘Cherry Red’ is a cute term that should be reserved for lipstick flavours or quirky cartoon dogs. IT DOES NOT BELONG TO THIS MANY LEGGED MONSTROSITY. ‘Screaming Blood’ centipede, maybe. ‘Nightmare Crimson’ maybe. NOT CHERRY RED!

As a bonus, here is a video of a giant centipede fighting a snake in Penang. (Hop to 1:00 for some drama!) I did not sleep for two days after watching this, and now do not want to go to Penang, EVER.

8. The Exploding Ant Blows Itself Up For the Greater Good

These ants possess two oversized, poison-filled mandibular glands that run the entire length of the ant’s body. They are a species of carpenter ant, which is questionable. If your carpenter blows himself up regularly, perhaps you should get your woodwork done elsewhere? Whats it like being featured in this article? It certainly is da bomb! Picture from http://weirdandcoolanimals.blogspot.com

The secretion has corrosive properties and functions as a chemical irritant, entangling and immobilizing all nearby victims. The ant, however, dies in the process. I guess their foes wouldn’t have…ant-icipated that?

Little insect suicide bombers. Wow. I guess if these ants lived in Afghanistan, they probably would be called…Talibants? Ahahaha. BONUS: The Hitler-Bug of Kluang!!!

You how many people wish they could look like famous peeple? I think this bug should have been careful what it wished for.