[Update: With the recent shootings happening in the country, we’ve updated this article to include these incidents]

We’re so unfamiliar with the idea of guns being used in crime that there’s usually a pretty high level of shock whenever one gets reported. But in the past 2 weeks, even before we could get over the shock of Sarawak PKR politician Bill Kayong’s murder, another three shootings happened in relatively quick succession – each one a drive by, each in broad daylight. And then, someone threw a grenade at the patrons of a bar in Puchong. So what’s going on? Are people getting easier access to lethal firearms?

No, our gun laws are still as strict as ever

We daresay it’s common knowledge among all Malaysians that owning a gun is an absolute no-no. In fact, Malaysia is so well-known for our strict gun laws that when a Malaysian journalist introduced himself to Gary Player – one of the best golfers in the history of golf – during a press conference in the US, his first response was:

“Malaysia has the best gun control laws in the world. Malaysia has got it right on gun control. You don’t simply issue gun licences to people.” – Gary Player, as quoted by The Heat Malaysia.

So unless you’re with the armed forces or a super big shot (The only gun-related pun in this article, BTW), the only guns you’re gonna own are the laser pew-pew types from the toy store or the musckles next to your armpits. 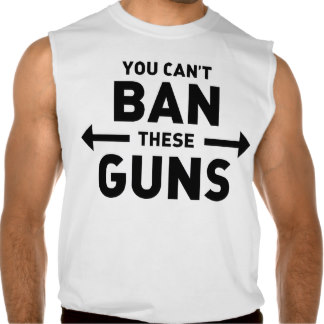 On a serious note though, along with our equally strict drug laws, this is really one law you DON’T wanna mess with. Here are a couple examples of what would happen to you if you decide to pop it like it’s hot:

You can read more of why you shouldn’t be playing with guns – even fake ones – in our Arms Act and Firearms (Extended Penalties) Act.

We spoke to a Malaysian gun owner and a seller of gun accessories for information about buying and owning a gun. Both have chosen to remain anonymous so we’ll be referring to them as John and Wayne throughout this article.

Also, since we were already going down this road, we might as well try buying a gun for ourselves.

Basically, we wanted to see what a Malaysian gun dealership looks like, and if they’ll entertain any random person interested in buying a gun. But first, we had to find a gun dealer.

That turned out to be an easy task because finding a gun shop was as simple as typing “Gun shop Malaysia” into Google search. However, some dealers will mention straight up that they won’t entertain walk ins – you’ll need to submit your gun permit for an appointment. We found one in the Klang Valley that didn’t have such a requirement.

We also thought that it would defeat the purpose if I (this writer) went in as media (durr), so we decided that I should go undercover. “Hallo. I is not from media.” Image from M-Magazine.

Okayla, CILISOS has no budget for convincing disguises so I just relied on my wits and walked up to the door, like a secret agent man.

I couldn’t take any pictures (for obvious reasons), but all I can say is that the place doesn’t look like one of those gun shops you see on TV or in GTA games. In fact, it’s one of those places you’d probably walk right by thinking they were some sort of kedai cenderahati. There are no guns on display, and no salesperson with a beard and hunting jacket (yee-haw!). Instead, the person who attended to me was well-dressed, professional, and very courteous in telling me that I couldn’t buy a gun.

Again, I didn’t get to buy a gun, so please don’t #IGP #PDRM. However, Q did share some pretty interesting information about getting a gun, such as…

1. Anyone can apply for a gun permit… and it’s easy! For illustration purposes. Image from RossySweety.

“We can help you to apply, but only for the process la… like what documents to get, how to appeal, things like that.” – Q

Actually, what we found out is that applying for a gun permit is really easy, like applying for a loan or scholarship except with more pew pew. In fact, you don’t really need to ask for help since all the forms are available online from the PDRM website!

It’s worth noting that there are actually two types of gun permits that you can apply for – shotguns and handguns. We will be referring to handgun applications for the rest of the article, but as a side note Wayne tells us that shotgun applications are slightly easier because they’re less concealable, and priority is given to land owners and (based on the form) RELA members. We’re not sure how much land you need to own though.

To start the application process, you first need to make sure you got the basics covered:

Ah you optimistic reader, you. 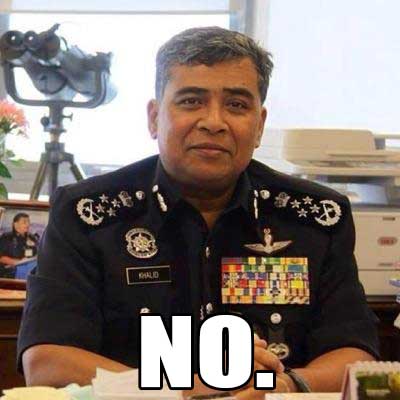 Unfortunately, applying for a gun isn’t the same as applying for a passport – it won’t be done within a day. In fact, it might take years before you know whether you kena approved or rejected:

“To apply memang can. Approval is hard… may take up to a few years.” – Q

The other tough part is to convince the police WHY you’d need a gun. Generally, it will help your case if you can provide reasons that would justify why you’d need to carry a gun with you, like if you own a security firm or if your job puts you at high risk of getting injured or killed (like a lawyer). For shotguns, it could be to protect yourself against wild animals if you’re a landowner. Being a member of a shooting club may also help the process.

We can’t confirm how true this is, but it might also help if you know people in the police department or go to the “right” dealer. This is because the permits go through a three-stage approval process:

There has been a recent controversy that the IGP’s daughter and son-in-law are majority shareholders in a gun dealership in Nilai, which according to the Sarawak Report is known for getting easy permit approvals. IGP Khalid has confirmed that his daughter does run a firearms business, but denied there was any favoritism in giving out permits.

Again, we cannot confirm if this is true, but we thought we’d add this tidbit in for anyone who doesn’t mind driving to Nilai to try their luck  😆

3. If you can’t convince the police, you can try convincing the Home Ministry Assuming that you haven’t died of old age by this point, you finally get a reply on your application! But sadly, it’s also a rejection.

What you can do now depends on which point of the approval process (refer to the previous point) the rejection took place. If it’s at the District or State level, you can either make an appeal to the IGP at Bukit Aman or resubmit your application and play the waiting game all over again. But if the rejection is from the IGP (Bukit Aman) level, you’ll have to make an appeal to the Home Ministry:

According to John, you’ll have 30 days to appeal to the Home Ministry once you get the rejection. The Ministry’s FAQ also mentions that their decision will be final and you can no longer appeal if they reject it, and you have to…..you guessed it… start the application process all over again.

But even if your application is approved, it doesn’t mean you’ve seen the last of police applications because…

4. Owning a gun is a HUGE responsibility That’s a friend of mine, during shooting course in Klang…

Being the proud holder of a gun permit doesn’t mean you can go around buying rocket launchers and using your backyard as a shooting gallery. Your permit will state the caliber (kinda like the bullet size) of the gun you’re allowed to own and the maximum number of ammo you can have at any one time. Also, a rocket launcher is not a gun.

Aside from that, here’s all the other stuff you’ll have to do:

a. Train to use the gun

You can arrange with the gun dealer and/or shooting clubs. The police don’t conduct training courses.

b. Renew your license every year

“Applicants have to submit a letter of competency from the shooting clubs of which they are a member of, and who have reached a certain age will also need to provide a medical report during annual renewal.” – John

c. Make an application to the police every time you run out of ammo

Once you’ve used up all your bullets, you’ll have to fill in a permission form with the police to buy more. Gun dealers won’t sell ammo without a signed form. You’ll also have to return the spent casings to the police.

d. Be the best that you can be™ with your gun

As a gun owner, you need to be on your bestest, responsiblest behavior at all times because you’re liable to be jailed and/or fined for stuff like losing your gun or ammo, or even being drunk while having your gun on you. And yes, you’ll get in trouble if you turn your back yard into a firing range. Even after all this talk about procedures and laws and stuff, there’s one more thing that about owning a gun that we’ve not mentioned: It ain’t cheap.

The upcoming Malaysian-designed and manufactured gun – the Malinnov M1P by local company Aegis Malinnov – is estimated to cost RM4,000 when it launches next year. The company has said that this is 20% cheaper than international brands, so you can kinda do the math yourself. Joining a club will cost you a few more grand (we found one with a joining fee of RM2,000), and that’s not including the cost of ammo and other government processing fees.

And then there’s all the responsibility that comes with it. 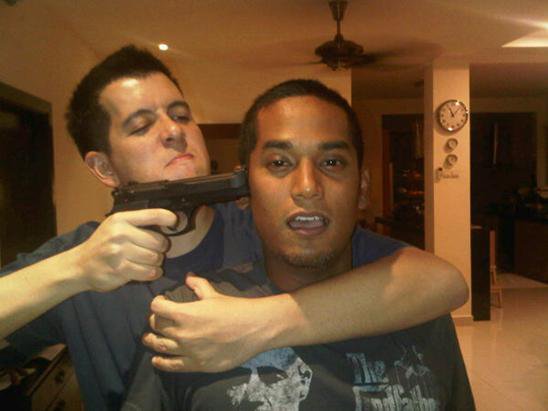 DON’T DO THIS WITH A REAL GUN! We forgot the context of this image, but found it posted on the Lowyat Forums. Click for the link.

We won’t go into the whole argument of whether or not guns should be legalized in Malaysia, but we will leave you with a thought:

“Malaysian gun owners are generally more respectful and mature, which you have to be, because you carry the power of life and death in your hands” – Wayne

If our laws are so strict, why are people getting shot? And got GRENADE summore??! We won’t go too much into the reasons behind the incidents, but suffice to say that the weapons used in most of these crimes are illegal guns which have been smuggled in from neighboring countries – Thailand for Semenanjung and Indonesia for Sabah and Sarawak. This is evidenced with Thai bullet casings found at the scene of a recent shooting. But you probably guessed all this already.

What you may not have guessed is that guns can be smuggled in for as little as RM10, and an illegal handgun can be bought for only RM300. In fact our borders are so berlubang that drugs and even cooking gas are smuggled on a regular basis:

“How serious it [drug and firearm smuggling] is, we do not know because our border area is very porous” – Masir Kujat, Deputy Home Minister, as quoted by The Borneo Post.

And if you can sneak tongs of cooking gas across, a grenade would (presumably) be pretty easy as well. If you remember the other grenade throwing incident from 2014 that happened in Bukit Bintang, it was found that the grenades were military-grade and not locally made, and they were over thirty years old – issued in March 1983.

So while it isn’t all that easy to buy weapons IN Malaysia, perhaps our safety is compromised by those who take that hop-and-a-skip across the border.