If you grew up watching Hong Kong TVB series and movies, you’ll know better than to borrow from moneylenders… Especially if you have a debt from your insatiable gambling habit.

But in reality, moneylenders are found all across the world with clienteles spanning across different races with different reasons. And most times, failure to pay up would really mean… Cialat lor. (Die lor.)

Termed ‘Ah Longs’ in Malaysia, moneylenders are known for doing some pretty nasty stuff to borrowers. Fair or not, legal or not, they don’t really give a hoot. Anyway, we don’t really need to explain la – sure ugaiz all know about them already. 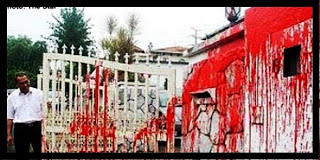 Like their love for abstract art… Image from nontoxicrayons.blogspot.com … especially in red. Image from malaysia-chronicle.com 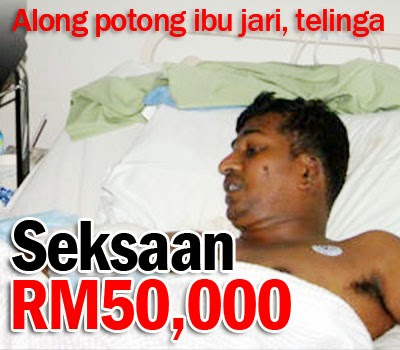 Or their habit of chopping things off…. Photo from khabarkini2 So, we all already know that Ah Longs run unlicensed operations, but just how different are they from licensed moneylenders? Are they same-same but different?

CILISOS speaks to a REAL licensed moneylender in Mid Valley City to know more about the things Malaysians have gotten wrong about them and their business. And of course, we got some of our FB friends to send in some questions.

Now, he has requested anonymity so we’re just going to call him Mr Chin to make this article more reader-friendly. Chin for 钱 (money), of course.

1. Not everyone who borrows money are gambling aunties and uncles So you think everyone who borrows money are kaki judi with no integrity issit? Well, actually so did some of us la… (*cough*Chak*cough*)

“Actually… Most of my customers are professionals. Engineers, lawyers, bankers, doctors, university professors… They’re among the highest salaried individuals, earning up to RM35,000 monthly.” – Mr Chin But so much money already, why loan some more? Mr Chin explained that sometimes it’s just an urgent need at an urgent time. Can be because their car kena towed or they wanna fulfil their promise of buying their loved one a car. So… There’s no beeline for gambling debts? #potongstim

“Nobody comes to us to pay off their gambling debts… At least, that’s what we know,” he said. “It’s up to the customer to disclose as much as they want.” He also shared that, in his company’s experience, they’ve given out loans ranging from RM1,000 – RM20,000.

But why do these professionals choose to go to moneylenders, tho? I mean, they’re professionals with a substantial salary… Well, we think that not everyone has the same commitments and spending habits. A person may earn half a million USD but fail to save RM1,000 monthly if he just, simply, can’t.

To add to that, banks may also not approve loans for some people. Being blacklisted is seriously the worst thing that could happen to your financial life.

“Banks check your credit profile through your CCRIS and CTOS records, so it’s almost impossible to get a lending hand if you’re flagged. But on the other hand, if you’re too ‘clean’ (like, you’ve never had a loan), banks may consider you as ‘high risk’ cause they don’t have your credit profile to check.” – Mr Chin

FYI, you can read more about the super scary CCRIS and CTOS here. Just know that if you continually miss your payments such as car loan/house loan/PTPTN/Courts Mammoth/Digi/Endah Water etc., you really can regret until cry wei.

So the first thing we asked: “Do ugaiz get wholesale prices for red paint?”

“What kind of stupid question is that? We’re not Ah Longs la, we don’t throw paint! We don’t even wear gangster clothes. My t-shirt is from Uniqlo ok.” – Mr Chin

(At this point, CILISOS is sorry for the misleading feature image right at the top. Mr Chin is actually a stylish, modern man with a hipster haircut.) #ihatecilisos #stupidclickbait

It seems that many people, including this writer herself, have the notion that legal moneylenders = stereotypical Ah Longs. But they probably have air-cond offices so no need for Pagoda singlets. Mr Chin set us straight:

“Look, Ah Longs are definitely illegal. But for us licensed, legal ones? We’re governed by the Ministry of Urban Wellbeing, Housing & Local Government (KPKT) with loan agreements complying with the Moneylenders Act 1951.” – Mr Chin

Being a completely legit business, our friend also tells us that they cannot threaten, harass or even use force to get someone to repay their loans. So what do they do then?

1. Call all emergency contacts provided by the customer. This is to determine the whereabouts of the customer as late payment penalty and interests will incur if the payment is dragged for a longer time. If that doesn’t work…

2. Despatch in-house debt collectors or a third party debt collecting agency to the customer’s office, and after that, their homes. (No la they don’t go vandalising and stuff, but they told us that debt collectors can be very, very intimidating.) And if that also doesn’t work…

3. Issue a Letter of Demand and blacklist the customer on CCRIS, CTOS and an internal system shared by other moneylenders in the region.

But on that note…

3. They seem to disapprove of what Ah Longs do Sure boh? Screencap of Along Bukit Beruntung video on YouTube

Mr Chin didn’t outrightly say this la, but it’s something we gathered after our chat. Technically, this isn’t even a truth, which is why we wrote ‘5’ in our headline. Of course, this may not necessarily reflect the sentiments of other licensed moneylenders around the country, but we felt that it was an interesting point to raise.

We talked about how Ah Longs confiscate ATM cards, beat their customers senseless, chop off body parts, lock up houses etc. and Mr Chin shook his head in seeming disapproval. He shared some of the worst illegal practices he has seen:

“At the initial consultation stage, unscrupulous interest rates (in excess of 10% per month) and unnecessary charges are made on the customer,” he said. “The loans can also be forced onto the customer, directly or indirectly.” But if they do take up the loan?

“Upon transferring their monthly repayment to the lender, Ah Longs can make the customer send all original payment slips back to them. Then, they can deny ever receiving the payment and insist that the borrower still owes a certain amount to the lender.” – Mr Chin

Wah damn teruk can?! But that’s not all.. “Once, we had a customer who owed a few other moneylenders at the same time. Because she had difficulty repaying our loan, we sent our debt collector to look for her,” he explained. But when the debt collector arrived at her home, some Ah Longs had locked the gates and doors of her house.

“She wasn’t home at that time, but her grandmother was. Kesian the old lady… She was shaking in fear the whole time,” he said.

4. Not every roadside sticker is from real licensed moneylenders

We asked a question posed by one of our friends:

Stickers and buntings! We see so many of them on the road, so how do they even stand out from the competition? He told us something which completely blew our minds.

“Be wary with roadside stickers and all that, not all of them are really licensed.” – Mr Chin

But he reminds us that not every roadside ad is a fake ad. “Just be careful who you engage with,” he said. “Legit moneylenders have proper websites and offices, so do your own research first.”

So at this point, we’re almost afraid of asking if their money is clean. But Mr Chin was very patient, although we’re pretty sure we’ve offended him more than Joan Rivers on Fashion Police.

“Of course we do la! Like I said, we’re a legit business governed by KPKT. The money that we have, is our own money. We’ve got partners who helped fork out money to start the business.

And yes, we declare our taxes, Profit & Loss and all that to KPKT with details of our customers. We’re credited for every background search we do online. We get professionally audited also wei.” – Mr Chin No need for this. Photo from demotivationalpost.com

In fact, they’re similar to banks in some ways. Adhering to the guidelines set by the government, they do proper background checks on their customers and review their documents (like your I/C, pay slip, bank statement, EPF…), bring you through the process in the office, and provide you with the money in the office itself. (Legally, the money must be given in the office.) They also only give out loans to salary workers.

Licensed moneylenders also have similar processing and up-front service fees. These consist mostly of stamp duty, credit check fees, lawyer fees and attestation fees. They also have a repayment schedule of up to 12 months.

Well for one, banks may take up to 2 weeks to approve a loan. As for Mr Chin’s company, the loan process can be done in a day. They also loan out a sum about 1 – 2x of the customer’s salary. “If we give any more, they won’t be able to repay in a year.” They also give out loans to foreigners, as long as they have a working permit.

And for our dear friend who asked:

Mr Chin said: “No. There is no bumiputera rate.”

6. They actually try to help customers manage their finances Don’t need for this also. Photo from lagiberita.blogspot.com

Now, NPLs (Non Performing Loans) happen when a customer disappears or stops paying. Mr Chin said that they get about 3% – 5% of total NPLs. But do they get compassionate rates for having poor finances? Unfortunately, no.

“If someone doesn’t wanna pay up, they can fake any example. That’s why in this business, compassion towards customers is a different story altogether.” – Mr Chin

But despite that, Mr Chin said that should a customer find extreme difficulty in repaying their loan, they’ll send help in other ways. “We do provide our customers with the best way to solve their problems,” he added. “We understand that sometimes things can get difficult, so we guide them to AKPK for counselling to help them manage their finances.” Do not fear, help is here! Image from TheStar.com.my

AKPK is so much more than a government body… They’re there to help individuals take control of their financial situation and gain peace of mind that comes from the wise use of credit. Yeah we stole that line from their ‘About Us’. But really, they offer some pretty neat services all F-O-C. Financial education, counselling and advice, even debt management programmes…

So… You think Ah Longs will send you to an institution if you cannot pay? Yeah, just not financial la…

Other than the fact that licensed moneylenders have been misunderstood as modern-day Ah Longs, they’re really just businessmen with margins to make.

They’re not the throw-red-paint-dragon-tattoo-ciggie-smoking fellas, they’re actually pretty decent people with a gentlemanly character. Well, at least Mr Chin was, who looked like a very simple, eligible bachelor drinking orange juice in t-shirt, jeans, boat shoes and a Fossil bag. (With no blood stains on them… We checked.)

Loans may not be a great thing, but we suppose that sometimes it’s just necessary. And if you ever find yourself in a sticky situation, there are avenues for help… Just find one that respects the law, ’cause they’ll also respect your rights as a human being.