Before we go into the actual Malaysian part of the story, let us tell you about something that’s been trending lately, where people with funny names are being sent messages with song lyrics. It’s a little hard to describe, so here are some examples: 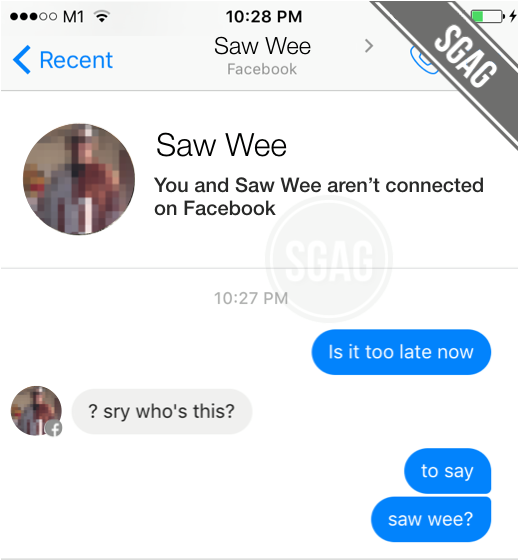 Or this Australian dude with a super unfortunate Vietnamese name:

If you don’t get it, um… don’t ask us. Unedited image from The BBC.

Phuc Dat Bich went viral last year when he claimed that Facebook discriminated against him by suspending his account multiple times because they suspected him of using a false and misleading name. After a whole lotta outrage directed at Facebook, Dat Bich came out and admitted that it was all a prank.

But Phuc Dat, here’s something that’s not a hoax: On Tuesday afternoon, CILISOS friend Fu Ken Ho received a message from Facebook asking him to send in legal documents (such as a passport or birth cert) to verify his identity. This isn’t the first time he’s encountered problems with his name on social media, since we’ve actually written a story on how he got kicked out of a Facebook Fan Page back in 2014: So Fu Ken sent them a scan of his passport and his IC (in black-and-white). But the next morning, disaster struck.

“I sent them every form of identification I had… Passport, IC, Birth cert… Bro, I even sent them links to my YouTube page to show I’m a real person” – Fu Ken Ho, via phone interview with CILISOS.

It seems that this effort paid off in the end since his account was reactivated on Thursday, but another Malaysian wasn’t so lucky…

We all have at least that one friend who doesn’t use their real name on Facebook. Well, you might wanna tell them that there’s a chance they might find their profile page being converted into a business page. For reference, a personal/profile page is the one that you see when you login to Facebook while a public/business page is for organizations or brands – like CILISOS!

PJ-based Geeky Gecko (not her real name, obviously) found out the hard way when she logged in one day to find a message asking her to verify her identity.

“Obviously Geeky Gecko is not my real name, but I sent in my ID anyway” – Geeky Gecko, via phone interview with CILISOS.

A few days later, Facebook decided she was not an actual person, but a brand

This is the email version sent to us by Geeky Gecko.

So what’s so bad about that? Well, we’ll let her describe it to you:

“All my stuff is gone. 7-8 years worth of pictures and posts… all gone. The worst thing is that I have to create a NEW Facebook account with a NEW email address to manage the Geeky Gecko page as an admin. But on the bright side I have 43,000 people talking about me -_-“

NAH, BACA:
Netizens are trying to get Tun M a Nobel Peace Prize. Here's why it might not be a good thing. Yes. That’s me. UiHua. The person writing this article. I am not a middle-aged divorced white man who works on a cruise ship. Anyway, someone who tried to add me on Facebook informed me that there were a few accounts with that name and that I should report them. So I did.

Facebook decided that “UiHua” is obviously NOT an Asian name 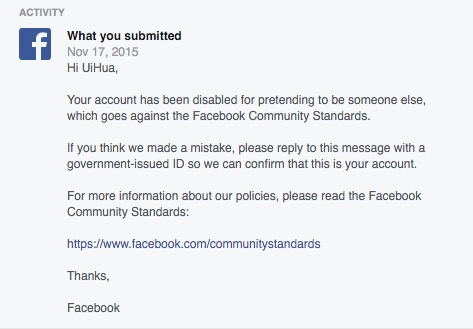 Not just that, all the other UiHua accounts weren’t suspended. Mine was the only one.

Long story short, I had to submit a scan of my passport and resort to complaining about it on Twitter.

“I learnt a very important lesson from this. Don’t report fake Facebook accounts.” – UiHua, in interview with himself.

But that’s not all, our editor Chak also kena! Back in February, a bunch of Chak’s friends (including me) got a friend request from “Chak”. While we appreciated the physical improvements, we also kinda guessed it was a fake account. Chak reported it to Facebook and was told that it wasn’t a fake name.

At least they didn’t suspend his account. Sigh. #Facebookhatesme In order to weed out all the trollers/macais/spammers/bad people, Facebook implemented a Real Name Policy which requires you to use your real name when you sign up. However, one thing they didn’t properly account for is that there are 1.59 BILLION Facebook users from all over the world with different names and views on identity. Facebook has acknowledged that the policy has run into problems with the LGBTQ community and those with Asian names; prompting an apology from Facebook’s Chief Product Officer Chris Cox ← Why didn’t his account get suspended? Cis.

But at the end of the day, the take home message here is about identity. Whether you’re a Batman bin Suparman or a plain John Tan, your name is one of the things that makes you, well… you. And you really don’t need a social media site (or anyone else) to tell you otherwise. After the 2014 incident, Fu Ken Ho got #FuKenHo tattooed on his arm. When we asked him why, he said:

“[After] the whole fiasco about my name and that it’s my name, so why not? Cos I’m who I am, nobody gonna change it.” – Fu Ken Ho.

And if you have one of those names that people make fun of, keep a scanned copy of your passport ready. You might need it.  😉