*A few of our readers have shared an epic video related to armpit censorship. Click here to head straight to the update, otherwise read on!*
Call us old, but we sometimes question the over-sexualization of the YOLO Generation in social media and how our eyes are bombarded with sex almost everywhere we look. And this is where we’re glad that the Ministry of Home Affairs have provided certain guidelines to prevent such material from seeping into publications that can be accessed by the general public, you know, like newspapers and stuff.

However, every once in awhile someone along the editorial chain gets a little too over-semangat and we get this: No, of course you don’t. It’s been censored. Duh.

But if you’re wondering what exactly was censored, here it is:

Yeahhhhh… They censored her armpits (Spoilers)

This picture was published as part of a New Straits Times article promoting the Yayasan Sime Darby Arts Festival, a free-to-attend two-day arts festival featuring film, music, arts, theatre, and workshops which you have probably missed if you’re reading this article now.

The Girl with the Mosaic Armpits (this should be a movie!) is singer-songwriter Bihzhu, an award-winning songstress who has been featured both locally as well as internationally.  She was pretty amused by the photo, from her Facebook posts:

We got in touch with her and….. yeah, we can confirm she was pretty amused:

I laughed my head off! It was so absurd to see this pixelated patch of my underarms in national print media. It was like, whoa, achievement unlocked.

You can give her music a listen by clicking here.

It… depends. We contacted a few people in the newspaper and magazine publishing business and they generally agree that what can and cannot be published is quite a go-by-feel thing. There IS a list if things that can’t be published prepared by the Ministry of Home Affairs but we suspect the one we found on their website isn’t the full list.

However, they all agreed that the revealling of armpits are a definite no-no although no one’s really sure why.

As a Mass Communication student, I was aware of this ruling of ‘no armpits’ in the media, although most people aren’t, because how many people actually realize that they never show real armpits in deodorant ads? So I wonder what led to this ruling… – Bihzhu

While we suspect that it might be related to the revealing of aurat – the intimate parts of a woman’s body according to Islamic interpretation – we can’t confirm it at this point because the person we spoke to at the ministry hasn’t gotten back to us yet.

Right now, the only proof of it being an aurat thing is this a recalled 8TV ad from 2011 which featured what was intended to be a humorous presentation of a Public Service Announcement asking people to not wear revealing clothing during Ramadan.

So what else is censored?

Here’s a rough list of the things they’re not supposed to show, but do note that it’s a very grey area so experienced editors use their own discernment to know what’s too much and what’s just fine:

2. Legs spread out to form a V shape, especially with bikini bottoms and short shorts. Cause you know what V stands for, right?

4. A man and a woman in bed. They have to look clothed, and married.

5. The pelvic bone. Cause if you can see that bone, you’re showing too much. Or in this case, wayyyyyy too much (Image from wikipedia)

6. Revealing clothes on Muslim models and celebrities – even if they’re okay with it. 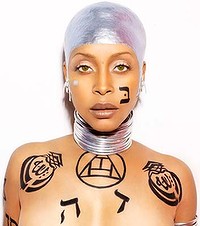 The shot that got her in trouble in Malaysia. Image from tattoodonkey.com

It seems that the armpit restrictions apply to ad agencies as well since it’s a bit of a running gag in those circles, as shown in this video from the 2003 Malaysian Creative Circle (MC2) Awards:

Just to note, the MC2 is an annual event to recognize creative leadership among Malaysian advertising companies which has since been cancelled. And no, not because of the video la.

Thanks to FORMER AD-WOMAN, Cahaya Ilana Zaini, and Jay Sheldon for sharing this video with us 😀

Eh, but I’ve seen armpits in some other pictures before….

So the reason why we mentioned that the authorities are a little more relaxed with women’s magazines is due to the audience the publication reaches out to. Considering that most readers of women’s magazines are female, the need to cover certain body parts isn’t as great.

A newspaper reporter we spoke to said that as far as he knew, there was no media guideline when it came to armpits; and he’d be surprised if there was – suggesting that the NST article might have been someone’s preemptive attempt to avoid trouble with the authorities or simply someone who put his or her personal beliefs into it.

But, we do need to clarify that we’re not pointing fault at the reporter for this. In fact, Bihzhu told us:

…it was a really, really good article. The reporter Aref Omar had really done his research and asked us all thoughtful, insightful questions and I think that’s reflected in the article.

We’re not pointing any fault at all

The publication guidelines are there for the right intentions. Sure, sometimes gaffes such as these happen, but they are harmless and do provide some form of (unintentional) humour for everyone else. If anything, we just wish the guidelines were a little clearer and better enforced. Even here at CILISOS, we do get into the occasional discussion of what we can and cannot publish. But that’s the industry for ya.