We took to Google and Twitter to see if we can learn more about these slogans and to see how the context of their use has changed over the years.

Unfortunately though, we haven’t been able to find a proper list of Malaysian slogans, the most comprehensive actually being an entry from Patrick Teoh’s blog. In fact, our previous article made it to the top 5 on Google’s search results for “Malaysian slogans” a day after it was published. Getting information on some of them is even harder, and this is why we’ve distilled it down to five slogans that we can comfortably write about without making stuff up. It’s not because we’re lazy, okay!

Wait, what’s a slogan? Well, according to the definition that best suits us (wikipedia), a slogan is defined as a memorable motto or phrase used as a repetitive expression of an idea or purpose.

For the purposes of this article, we’re sticking to nationwide campaign slogans which are not advertisements intended to sell you a product, so slogans such as “Minum Milo Anda Jadi Sihat dan Kuat” and “Selangor ku” won’t count. However, we will consider those that didn’t start off as a slogan but eventually became synonymous with the campaign.

Okay before we start, we just wanted to point out something really strange. When we searched “Malaysia Boleh,” we got pr0n links. Anyway, back to your scheduled programming.

While Dr.Mahathir is commonly credited for coining it, “Malaysia Boleh” was actually created by Milo back in 1992. It was the result of a brainstorming session between Nestle (who owns the Milo brand) and the Olympic Council of Malaysia who were trying to find a way to encourage and support Malaysian athletes overseas. You can read a detailed account here.

Malaysia Boleh is kind of like the Kanye West of Malaysian slogans – actually pretty decent but gets way too much hate and ridicule. Its use has evolved from a motivating cry of support to a more cynical jabs at the government, referencing the ability of governmental bodies and political figures to seemingly make decisions that are against public or legal sentiment and get away with them. It has also spawn one of the more enduring pet-names for Malaysia – Bolehland. 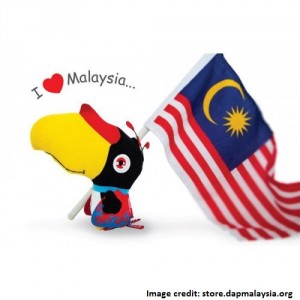 Ubah is kinda two things: It’s a slogan as well as the name of the Hornbill mascot that people have come to associate with DAP and, by a larger extension, the opposition coalition.

Ubah the Hornbill was designed by Ooi Leng Hang during the Sarawak state elections in 2011 and has proven to be extremely popular. With a candid personality – Here’s an interview between Ubah (yes, they actually interviewed the mascot) and Malaysiakini – Ubah has since become both a merchandising and public relations success. MCA has tried to mimic the success of Ubah with a panda mascot, to mixed success.

Usually accompanied by the words ini kalilah to demonstrate the hope that the GE13 would be the election to topple the ruling BN coalition, “Ubah” became the rallying call for supporters as well as meme makers country-wide. As to which came first, we’re quite sure the Hornbill did, as Ooi has mentioned that the name “Ubah” was inspired by the party’s aspirations.

After the results of the last election as well as problems within the Pakatan Rakyat, Ubah has also been used to refer to… well, the lack of change.

However, we’re pretty sure that Ubah the Hornbill will entertain children and car back windows for elections to come.

We don’t think there’s a single Malaysian out there right now who doesn’t know this one. The only thing is that 1Malaysia isn’t a slogan – it’s a concept. The actual slogans have changed over the years, with the more familiar ones being “Rakyat Didahulukan, Pencapaian Diutamakan” (2009) and “Janji Ditepati” (2012).

Introduced in 2010, The 1Malaysia concept quickly became the buzzword for the positive changes planned by the Najib administration. We say “quickly” because RM38 million and 191, 709 promotional activities were used to promote it in 2010. 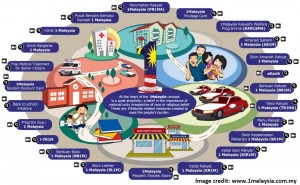 As evidenced in the picture above, 1Malaysia initiatives cover everything from groceries (KR1M / KIR1M) to anything that can be cutely abbreviated with a “-1M”, so we’re instead giving you links if you wanna read more about it. It’s not that we’re lazy, but it’s just that we aren’t too keen on writing 20,000 word articles. So sorry if you potong ST1M.

BTW, did you know we have a 1Malaysia map (1MAP?)? It’s powered by Bing so we’re pretty sure the smartphone version would be 1MMOBILE. Hur hur hur.

Screenshot of the 1Malaysia map

Anyway, all this is fine and dandy until Anwar Ibrahim alleged that 1Malaysia was part of a conspiracy involving Malaysia, Israel, and public relations firm APCO. The gist of the story is that 1Malaysia is similar to One Israel, an Israeli political coalition, and APCO was involved in conceptualizing both campaigns. What this implies, according to Anwar, is “your own interpretation.”

Anwar’s claims have been denied by BN and APCO. We think it’s probably just a one off-coincidence.

After the extensive promotional work done, we’d be very surprised if 1Malaysia doesn’t stay in the public consciousness as much as “Malaysia Boleh” did. We can only wonder what sentiments will be attached to it then, since it’s not exactly setting off on the right foot.

It hasn’t reached the level of cynicism as that of Malaysia Boleh, since there’s still a certain degree of hopeful positivity in many mentions of it. Perhaps we’ll only know when businesses stop using it as part of their promotional campaigns.

Introduced in January 2013, there was a lot of hope placed on “Endless possibilities.” It was meant to complement the country’s “Malaysia Truly Asia” and 1Malaysia campaigns, boost Malaysia’s country branding for investors, as well as be an extension of the “Malaysia Boleh” slogan. We guess one might say that the slogan had……endless possibilities.

For RM330,000, it honestly isn’t bad if not for the fact that Israel used the tagline as well. Considering that a student who liked an “I Love Israel” page on Facebook can be investigated for sedition, it’s safe to say that Malaysia’s position on Israel isn’t going to inspire a buddy-cop movie anytime soon. However, Putrajaya has mentioned that they unveiled “Endless Possibilities” first, as Israel’s “Israel. One Place. Endless Possibilities” campaign came out four months after Malaysia’s initial unveiling.

We could argue that something as catchy as “Endless Possibilities” would have been thought up by others as well, and indeed it has – Mongolia used it about a year before Malaysia did, so no big deal, right?

The “Endless Possibilities” campaign has been indefinitely postponed. We think it’s probably just a one-off coincidence.

Because “Endless Possibilities” never made it to the public eye, we don’t think it’ll have the staying power of any of the other slogans here except to be used as an example of doing your research before launching anything.

Chances are pretty high that most of us who grew up knowing the Power Rangers won’t know the “Malaysian Malaysia” slogan. That’s because it came out in the 60’s and was the slogan that moved the split between Malaysia and Singapore. Of course, there were loads of other factors, but this was the slogan in use at the time.

“Malaysian Malaysia” is most popularly associated with Lee Kwan Yew who used it in opposition to racial policies. After much disagreements between the People’s Action Party and the then-Alliance party (You can read one such transcript here), it was eventually decided that Singapore was probably better off on its own. 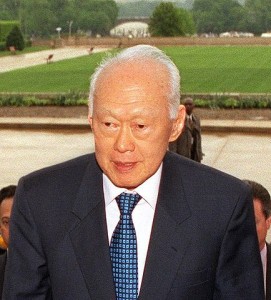 We couldn’t find anything that represents this slogan, so here’s a picture of Lee Kuan Yew instead. Image from Wikipedia Commons

However this slogan was brought up again in 1999 by Lim Kit Siang of DAP. Let’s just say that it’s not exactly rocket science to figure out how well UMNO took this. There have also been comparisons between “1Malaysia” and “Malaysian Malaysia” to necessitate an explanation on why this isn’t the case on the 1Malaysia website.

Yeah… Considering how sensitive this one is and that even we came across it by chance, we don’t think this would be making a comeback anytime soon. It still gets some mentions on Twitter though, usually in discussions of the Singapore-Malaysia divide or in racial policies.

Slogans remain an integral part of any campaign, be it political or commercial, as it summarizes what the organization wants the public to know and remember. It has the equal power to draw in supporters but can also be used by opponents just as easily.

On one hand, we do agree with some opinions that politicians might be hiding behind their slogans; but on the other, we feel that there needs to be a database of these slogans as well as the history behind them since it provides an eye to the social and political situations of the past but moreso because it’s that awesome sense of nostalgia that comes with rewatching them again.

As mentioned, we couldn’t really find many campaign ads on YouTube, so here’s a collection of RTM ads over the past 50 years. Enjoy 🙂