Mention Terengganu and you would probably think of keropok lekor, PAS and songkets. But just recently, there’s a new attraction that has been opened to the public: We’re talking about the bridge. Img from The Nation

Terengganu’s latest attraction, which is a bridge, is creatively known as the…

Yea, the name may not sound as grand as the bridge itself but it’s probably because that is not the bridge’s official name anyway. Although it may look complete, the bridge isn’t officially launched by the state govt. In fact, it is currently being opened to the public for a test run from June 2 to June 17 (soz gais, we wrote this a bit late but still got good news later so read on okies?). So that’s probably why you can see selfies and videos of the bridge online.

Despite visitors’ excitement to use or take selfies with the bridge, we found out that…

This bridge will be the first drawbridge in Southeast Asia

The Terengganu bridge is actually Terengganu’s fourth bridge(!). Here are the other three: Not only that, the Terengganu bridge may be able to shorten the time taken to travel from Kuala Nerus to Kuala Terengganu, especially if you’re heading to the airport because the bridge is said to be a direct link towards the airport. According to Muhammad Sollehin Yunus from Seberang Takir, Kuala Nerus, it normally takes him about 15 to 20 minutes to travel from his home to the city (Kuala Terengganu). But with the new bridge, he can arrive there within 10 minutes!

Oh, and the 638 metre bridge with 16-story tall towers to support it can actually be raised and lowered accordingly which is probably why it is considered a drawbridge. This was reportedly inspired by London’s Tower Bridge, which is like, the quintessential drawbridge. A boat passing under the bridge. Img from Nona

“The characteristic of the drawbridge and ‘Bascule Span’ need about two minutes to open and the same duration to close.” – previous Terengganu MB, Ahmad Razif Abd Rahman to Teganukita, translated from BM.

Okla, not exactly two minutes if you calculate the total time taken for the whole process. If you add the duration to clear off the bridge from vehicles, it may take about 20 minutes for the whole process to be completed. But why is it even necessary to build a drawbridge tho?

Apparently, there were plans to develop the area around the bridge such as by building boat docking facilities, which means there’ll be ships nearby the bridge. And since the those ships would pass underneath the bridge, it is probably necessary to build a drawbridge instead of a normal one so it can give way to those ships. And plus, this apparently makes the Terengganu drawbridge the first of its kind in Southeast Asia.

And the cost to build this drawbridge is… over RM200 million!?

Actually, the Terengganu bridge is a part of something bigger than just a normal state govt project. It is reportedly a part of Kuala Terengganu City Centre (KTCC, not to be confused with KLCC okies?) by the East Coast Economic Region (ECER) – an establishment in line with national aspirations to become a high-developed nation by distributing wealth across the nation equally. ECER covers Kelantan, Terengganu, Pahang and even Mersing, Johor.

ECER allegedly allocated roughly RM5 billion to develop KTCC, a project that pretty much took up a 7 km radius from the Terengganu estuary. ECER plans to develop many things like a five-star hotel, shopping mall, international shipping facilities (like the ones we mentioned earlier), a condominium and, of course, this RM248 million Terengganu drawbridge, which is also said to be able to enhance the growth of KTCC as a hub according to ECER’s master plan. Just to give ugaiz a clearer picture of how much that is, we’ll compare the construction of Terengganu bridge to the construction of the longest bridge in Southeast Asia which is the Sultan Abdul Halim Muadzam Shah bridge (Penang’s second bridge). The cost to build Penang’s second bridge is a whopping RM4.5 billion! Here’s a comparison of both bridges:

Bridge specifications for both Penang second bridge and Terengganu bridge.

NAH, BACA:
How much time do you spend in front of the TV? Take the CILISOS Kaki TV Survey 2017 now!

Speaking of construction, ECER is a local establishment btw so most of the people involved in the construction of the bridge – from supervisor and construction manager to construction workers – are locals (about 80% out of  250 workers involved).

OMG, got a super atas restaurant in one of the towers!  😮

So you might’ve noticed the towers on the bridge with two sky bridges connecting two towers. Actually you can enter the towers as, according to Jebasingam, there will be a gallery at the bridge for the public to enjoy the sights of the city and shops nearby the sky bridges. As a matter of fact, there is reportedly a super fancy restaurant located on the 14th level of the north tower! 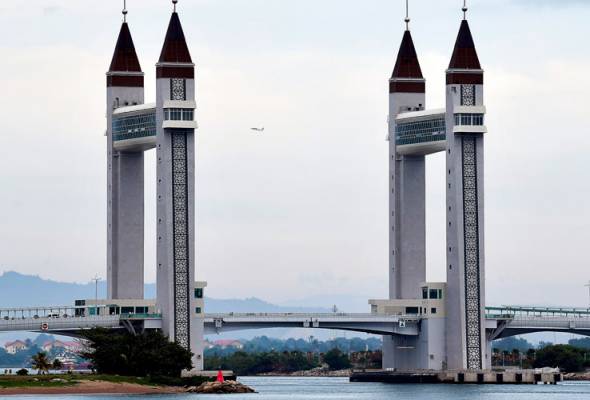 Err… we’re also not sure which one is the north tower based on this pic. Img from Astro Awani

But if that is too atas for you, then you can probably opt for restaurants nearby the bridge like the one at Taman Selera Tanjung Shah Bandar which is apparently popular for its cockles: “Visitors will also certainly look forward to seeing the bridge being raised and lowered, and we have plans to do this twice or thrice a day depending on the traffic situation. Just like the London Tower Bridge, where visitors can see the raising and lowering of the bridge. It will be an exciting phenomenon for visitors.” – Jebasingam to Bernama.

What other better ways to do that than by eating somewhere nearby the bridge, right?

Besides restaurants, another business seems to be gaining more demand each day thanks to the bridge. Began operating in July 2018, the Payang Water Taxi recently offers a RM5 tour package called ‘Selfie at the Drawbridge’, among other tour packages.

“It offers a very nice view. We are using this opportunity to make some income. God willing, when the bridge is fully opened, more will come and we promise better service.” – Zakaria Dagang, chairman of Cas Ligas Sdn Bhd, operator of Payang Water Taxi told NST.

Zakaria mentioned that the boats operate on Friday and Saturday from 5pm to 6.30pm where trips are normally loaded with passengers.

But with all these developments and tourism activities, there are repercussions too la. When the bridge was still in construction, several boat operators who ferry passengers to the city and back from Kuala Nerus feared that they will lose their business.

“Long ago there were so many of us waiting eagerly for passengers to board our boats and the jetty was a hive of activity. Those days I could get up to 200 passengers a day. Sadly today I would be lucky if I can ferry 20 passengers who are mostly the elderly traders from Pasar Payang. Ever since the 60’s the fare was only increased by 20 sen from 80 sen to RM1.” – Ali Muda, boat operator to Bernama.

Not only that, since the drawbridge was opened to the public during Ramadan, many people took the opportunity to buka puasa there. And because of that, this happened: Aiyo, we really can’t have nice things, can we? Screengrab from Berita TV9’s YouTube

As it turns out, the public who went there to buka puasa reportedly claimed that there weren’t enough rubbish bins provided at the area. This would probably bring us back to our main point where the bridge and the area around it are still under construction. Having said that…

When will the bridge be completed and officially launched??

At the time of writing, state secretary Datuk A Rahman Yahya claimed that 99% of the bridge has been completed.

“We will open the bridge for testing and also for the people to use it during the upcoming Hari Raya celebrations, then we will review every aspect and expect it to be fully open in late June. Currently, the bridge is 99% complete. The other 1% is the finishing work such as the installation of road signage.” – Rahman told The Star.

As a matter of fact, only vehicles are allowed to be on the bridge throughout this test run period. Pedestrians aren’t allowed on the bridge because the pedestrian walkway is still under construction. The walkway is closed at the moment. Img from Harian Metro

As we approach the final day of the test run (and the end of this article), you might wonder when the bridge will be getting its official name and will be officially opened to the public. Although there were reports stating that the drawbridge would be fully completed in September and would be officially launched a month later, according to ECER Development Council’s senior manager, Razlee Hassan, the official launch date would be announced after June 17.

We’ll keep ugaiz updated on that. And once you know when it will be launched, then you may wanna visit the Terengganu bridge yourself. #notsponsored 😀