If you’ve been on social media lately, you might have heard of a rare event that will happen tonight (Wednesday, 31st Jan 2018). If you are to look up at the full moon, you’ll be able to witness a triple moon event happening: a blue moon, a supermoon and a blood moon (caused by a lunar eclipse).

The only moon some people want to see. Gif from Imgur.

But what’s the deal with all these different moons? How can the moon be bloody and blue at the same time? The terms may be a little confusing to non-telescope-toting people, so…

Here’s a brief definition of what you’ll be looking at.

The event will consist of three different events: a blue moon, a supermoon and a blood moon.

What is it: An extra full moon for the month.

Despite its name, the moon won’t really turn blue, so no new baby Smurfs will be born on the night. There are events that cause a full moon to appear blue, like volcanic eruptions or forest fires, but a blue moon is simply an extra full moon in a month/year/season. See, the time it takes for the moon to go through all its phases is approximately a month, so it’s held that a year with 12 months should have 12 full moons. However, a full moon cycle is only about 29.5 days, meaning that 13 full moons in a calendar year is possible. That extra full moon is called a blue moon. 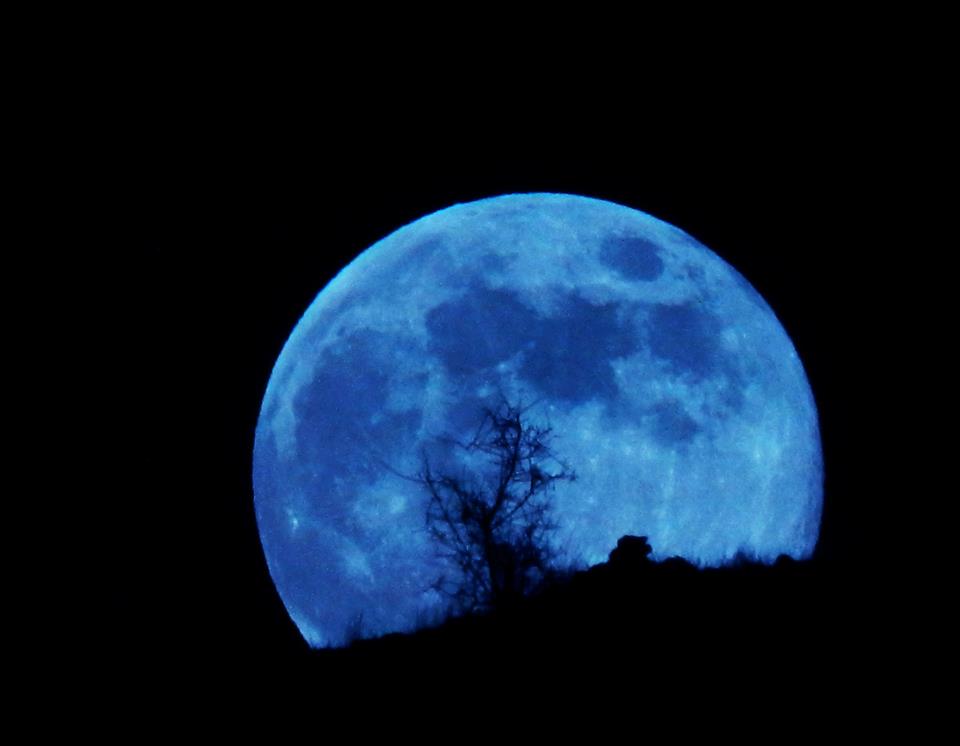 So it won’t probably look like this, but hey. That’s what Photoshop’s for. Img by Priya Kumar for EarthSky.

However, the modern interpretation of the blue moon is an extra full moon in a month as opposed to a year, which is why we can have a blue moon so early in the year. So anyway… yeah. A blue moon event looks pretty much like the regular moon. It’s just that it happens twice in a month.

For the old blue moon definition (extra full moon for the year) the phrase ‘once in a blue moon’ may be accurate, as out of the three events that can be seen tonight, a blue moon is the rarest, happening once every 2 years, 8 months and 18 days. The modern interpretation makes it less rare.

What is it: A full moon that’s bigger than usual.

The actual term for this phenomenon is called a perigee syzygy, which is a term you can use to impress your friends. Basically, the path the moon takes around the earth is not a perfect circle, and there’s a point along the path where the moon is the closest to earth. This point is called the perigee, and since objects closer to you look bigger, the moon will seem to be 14% larger than when it’s at its furthest point from earth (the apogee, and the moon at this point is called a micromoon). Seasoned moonwatchers will be able to tell the difference. Img from UniversalLifeTools.

A syzygy, on the other hand, is when celestial bodies align in more or less a straight line. In the case of the earth, the sun and the moon, this can result in either a new moon, a full moon, a solar eclipse or a lunar eclipse, but we’ll get to that later. Basically, a perigee syzygy aka a supermoon will happen when the earth, sun and moon is in a straight line and when the moon is the closest to the earth.

Someone worked out a calculation of the number of times this can happen, and she determined that a supermoon is possible at least once every 412 days (almost 14 months).

What is it: A full red moon.

Despite the blue moon not being blue, a blood moon (a lunar eclipse) have a high chance to be red depending on the air quality (cleaner air gives a better color). Basically, eclipses happen when a syzygy happens between the sun, earth and moon. When the moon is in the middle, it blocks out the sun, causing a solar eclipse. When the earth is in the middle, we cast a shadow on the moon, causing a lunar eclipse.

Or maybe when the moon spirit is threatened. Gif from boringbengali’s tumblr.

Img from an Ohio State lecture.

The shadow cast by either the moon or the earth is relatively small, so more often than not we miss each other’s shadow, giving us new moons instead of solar eclipses and full moons instead of lunar eclipses. On the rare occasion that the moon moves into the earth’s shadow, we get a blood moon, colored red from the sunsets and sunrises happening on the edges of the earth.

“That red light you see is sunlight that has skimmed and bent through Earth’s atmosphere and continued on through space to the moon… In other words, it’s from all the sunrises and sunsets that ring the world at the moment.” – Alan MacRobert, of Sky and Telescope magazine, as reported by The Hindu.

Or, if you prefer a less romantic definition, colored red due to Rayleigh scattering.

A blood moon (a complete lunar eclipse) may happen between two to four times a year, but not every part of the earth can see it.

While all these events by themselves aren’t that rare, according to Fox News, the last time all three happened together was in 1866, at least for the western hemisphere. The most recent super blood moon (not a blue moon) was reported back in 2015, and this year’s super blood moon will be the seventh since 1900. It’s pretty rare, so you might want to step outside and take a look.

So how can I see this super-blue-blood-moon thingy? You don’t really need a telescope or binoculars to see the moon turn red, but you’ll be able to see the event in more detail if you use them. Just remember to look east. The eclipse starts at 6.51 pm, but West Malaysians will only see it starting 7.15-ish. The moon will start to turn red at about 8.50-ish, and return to its original color at about 10.10-ish. The event ends a little after midnight.

If you just have to see it through a telescope but doesn’t own one, or just don’t want to watch it alone, observatories across the countries are opening their telescopes for use. Some will even be providing activities for visitors during the event. Here are a list of observatories, with a link to their locations on Google Maps:

You can also catch the eclipse’s live stream on Angkasa’s Facebook. But what if you missed it? Well, there’s another lunar eclipse we can all see on the 27th of July this year, but it will be a bit smaller than this one due to the moon being far from the earth at that time.