Remember back in Sekolah Rendah when teachers used to ask you what you wanna be when you grow up? As Asians, you’d expect to hear occupations like doctors, engineers or even astronauts (but never writers T.T).

But what if we tell you that there is a kid in Malaysia who is a student by day and an astronaut of some sort by night (literally)?! And he goes by the name Arav Annamalai. Arav and one of the images of the moon he captured in 2020. Img courtesy from Arav and Annamalai

We say he’s an astronaut of some sort because, back in 2020, Arav was internationally recognised by space agencies for his discoveries of the surfaces and activities on the moon. He calls this his lunar space exploration, which makes him a space explorer (in a way), and he did all these by using his iPad!

While that’s a bit old news (boo-hoo CILISOS is covering a not-so current issue #ihatecilisos), Arav has recently gotten in touch with us to share that he was supposed to host an exhibition of his lunar space exploration. Seeing how we get the opportunity to kepoh with Arav and Annamalai, we decided to talk to them about their journey in exploring the moon.

So, what did Arav discover through his iPad?

Most of the time, Arav and Annamalai would capture images of the surface of the moon… 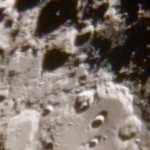 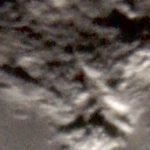 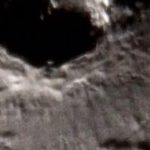 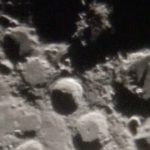 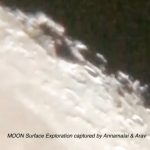 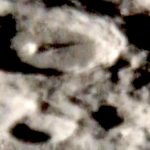 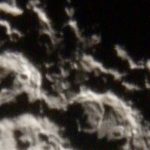 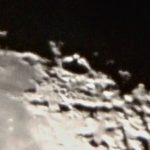 At times, they would see moving objects on or in contact with the moon…

But waitamin. How did Arav and Annamalai capture all these with just an iPad when the moon is 384,400km away from the Earth?? That’s 30 Earths away from the moon!! 😱😱😱

And if you’ve tried taking a picture of the moon with your phone, you’d probably end up like this writer with this kinda picture… Maybe this writer is a noob at taking pictures of the moon. :\

Well, before we get to that, let’s take a look at how he started this lunar space exploration in the first place. As it turns out…

Just like any child (and adult la, tbh) in Malaysia, Arav enjoys spending his time on his phone, particularly playing video games. His interest in astronomy only began a few years back when his mother, Banu Namasivayam, took him to several astronomy sessions.

“My mom inspired me to look at space (by bringing me to astronomy sessions) and, along the way, I learnt about Malaysia’s astrophysicist, Datuk Mazlan Othman, who became my inspiration.” – Arav to CILISOS.

But what truly sparked the idea of a exploring the space was a gift from his neighbour, which happened to be a telescope. Arav’s telescope (but this telescope was bought by Annamalai). Img from @sunsaucer Instagram

Seeing how Arav’s interest in astronomy piqued, Annamalai decided to assist Arav in his astronomy journey. Now, don’t get us wrong tho. Arav clarified that his parents are not astronomers or scientists of any sort. Annamalai owns a company called PVA Cosmic Telescopy Solutions, which specialises in educational research in astronomy for children.

“My father is a creative designer and photographer, who makes invisible art, security features and photography using ultraviolet and infrared light frequency. My mother, on the other hand, simply loves smartphone photography.” – Arav.

Using what they know at hand, along with a lil bit of research here and there, Annamalai and Arav built a telescope that is connected to the iPad to capture those images we showed earlier.

Annamalai shared that they first started by capturing images of the Sun. And just as with the moon, Arav and Annamalai detected many objects on the surface of the Sun, which they found fascinating.

However, when they wanted to submit their findings to the International Astronomical Union, they were told that this finding is pretty well-known. This was why they moved to exploring the moon instead.

But it wasn’t an easy start, because…

Ok, here comes the bad news, kiddos: there are no science grants in Malaysia for kids who wish to be space explorers like Arav. Y’all probably gotta grow up and eventually find your way into the astronomy field to get one. :'(

This may have been why he teamed up with his father, mother and his father’s business partner at PVA Cosmic Telescopy Solutions, Istal Zainee Abdul Rahman, whose family was formerly attached to the Malaysian embassies in Bahrain and New Zealand; for his lunar space exploration project. Back in 2016, Istal visited the United Arabs Emirates (UAE) mission to Mars (which was launched in 2020) and, according to Annamalai, this triggered Arav and the team’s interest and eventually helped them in their research for the space exploration project.

Istal (right in the first pic) at the UAE mission to Mars and with the Agong (left in the second pic) a few months back. Images from Annamalai and Istal

Together, they submitted their discoveries to various local and international agencies and competitions. And they participated in these competitions under Annamalai’s company, PVA Cosmic Telescopy Solutions.

“Sometimes we just participate to learn and not to win. In doing so, people get to see our creative skills in space and lunar surface exploration. It was trial and error and we learnt many things in the process.” – Arav and Annamalai, in an email to CILISOS.

Some of the competitions they’ve participated in were ScinEx 2020, which was hosted by Universiti Teknologi MARA and Pejabat Pendidikan Negeri Sembilan and the NASA Space App Challenge 2020, KL (this is not fake news like that other guy ah).

Despite not aiming to win in any of the competitions they participated, Arav and his team eventually received various awards from organisations like the World Invention Intellectual Property Associations (WIIPA) and the Toronto International Society of Innovation & Advanced skills (TISIAS) Canada. These awards were given to Arav as a sign of recognition towards his lens innovation (read: device combining iPad and telescope) that could capture images of the surface of the moon.

With all these participations and awards, Arav’s lunar space exploration was eventually noticed and featured by Innovaspace London, a global think tank specialising in science projects and educational initiatives. Arav with some of his awards. Img from Arav

But even with a team of adults, it seems impossible for them to get local science grants. According to Istal, it’s not just time consuming to get one but also really, reallllllyyyy expensive.

“They will ask for a lot of information like bank accounts and data on top of lab test results. Even if you get a grant, you’d only be given 40% to 50% (of what you’ve spent) of disbursements. It’s far cheaper to head overseas and get exposure for creative space explorations.” – Istal.

This is true seeing how stringent the criteria for Science, Technology and Innovation Ministry’s grants are.

So, what is Arav doing at the moment if he can’t get science grants? Well, at the time of writing, Annamalai had helped Arav out with getting their discoveries patented in July 2020. They are currently going through the process of completing it.

Just like every other Malaysians who made it internationally, Arav and Annamalai are only getting noticed after being recognised by various space agencies.

“Little by little that’s how we ended up getting recognised by the Science Ministry of Malaysia (MOSTI), Ministry of Tourism (MOTAC), National Library Malaysia and National Aeronautics and Space Administration (NASA), among many others.” – Arav and Annamalai.

And thanks to this recognition…

NAH, BACA:
Now you need permit to fly drones in Malaysia. But what about small drones?

You can explore the moon and space with Arav soon!

As mentioned in the intro, we learnt about Arav and his lunar space exploration when he contacted us to share his latest exhibition. After the recognition and awards for his work, Arav was offered to host an exhibition at the National Library before the announcement of the MCO 2.0.

“The Ministry of Tourism and National Library came forward to assist us and now we are discussing ways to showcase our works after the COVID-19 subsides.” – Annamalai. The space where the exhibition will take place. Img from Annamalai

Needless to say, this exhibition is postponed to a later date. In the meantime, you can join Arav’s lunar space exploration by visiting Annamalai’s YouTube or PVA Cosmic Telescopy Solutions’ Facebook or Instagram, where they update their discoveries there. At the time of writing, Arav mentioned that he’s also observing the surface and activities on other planets on top of attending school.

“I only explore space at night when the moon is visible or else early morning at 4am to 7am. My dad limits my observation of the moon, Jupiter, Venus, Saturn and Mars as the digital devices affect my vision and my behaviour.” – Arav.

Arav is keen in getting Malaysian kids to join him in his lunar space exploration. So, watchu waiting for?