Because of the MCO and the travel restrictions, barely any of us are able to cuti-cuti overseas. The most we can do to mengubat our rindu of travelling is to watch foreign TV shows on Netflix, and travel vicariously through those shows.

But when we started seeing memes of Azmin Ali across the world, at the risk of sounding old, the first thing that came to our mind is Where In The World Is Carmen Sandiego? And just like how Carmen was chased around the world by two teenagers, Azmin is chased by our very own internet bawang rangers.

So we bring to you: Azmin Pergi Mana Hari Ni? Netflix actually has a reboot of Carmen Sandiego released in 2019. Img from SyFy

For this article, we’ll be looking at the trade missions Azmin’s done in those countries where surprisingly,  he’s actually been pretty successful in securing trade deals overseas. But don’t worry – we’ll also include the meme moments that happen there too because as it turns out, Azmin is equally successful at creating enough fodder during his travels for our internet bawang rangers to make fun of him.

We’re not just gonna tell you about his trade missions, as we’ll also include extra trivia about the place, just like the show.

We’re going to update this article every time he travels to a new country, so hopefully at some point we’ll actually go around the world in 80 Sheratons (or more). Despite being a senior minister for a year, this was Azmin oppa’s first overseas trade mission. In 2020, just like us marhaens, he was limited to having virtual meetings with other world leaders, such as the one he had at the ASEAN summit.

April is peak cherry blossom season in South Korea, so we expected him to at least have some pictures of it on his Instagram. Sadly, he was all business. His primary mission in Seoul was to discuss South Korea’s entry into the Comprehensive and Progressive Agreement for Trans-Pacific Partnership (CPTPP) – basically a free trade agreement where potential new members had to negotiate with the 11 current members before joining.

On his second day, he did show his fun side and posted an image of the Paris Croissant – one of the largest bakery chains in South Korea. According to reviews, their pastries are good, if slightly overpriced. April is also cherry blossom season in Japan, but Azmin-chan didn’t have time for a picnic under the sakura trees uwu (`･ω･´). He was there mainly to finalise an agreement with Nippon Electric Glass, where NEG agreed to invest RM1 billion in Malaysia starting in 2022. Overall, he managed to secure RM8.75 billion worth of investment from Japanese companies during the trip.

To reward himself, we thought he’d at least visit touristy spots such as Shinjuku and Akihabara. Probably due to the time constraint of 2 days, he did the most Malaysian thing – he went to Daiso. More specifically, he met the President of Daiso. Interestingly, Daiso in Japan actually carries 160 products that are made in Malaysia. Nani-kore?! We know the first thing you’ll think of is the meme, but hear us out. Azmin actually had a successful trip to Saudi Arabia – the country agreed to be an import hub for Malaysian palm oil and palm oil products. This is actually a major trade deal, because it means we’ve gained larger access to the Middle East and North African markets, which are very lucrative.

Sadly, the only thing we’ll remember about this trip is the viral picture of Azmin helping to clean up the wet floors of Masjidil Haram. Which led to an impromptu Photoshop Battle on the internet. 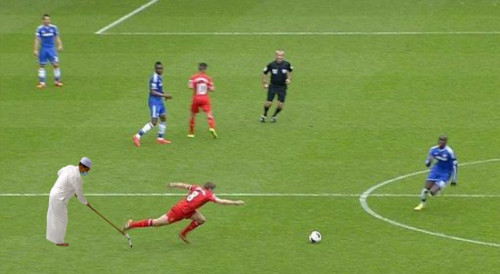 Aside from oil reserves, Saudi also proved they have a strong meme reserve when their Minister of Commerce printed out the tweet featuring Azmin’s viral image, framed it, then presented it to Azmin. After the meme-filled trip to Saudi Arabia, this was a very quiet trip. Azmin’s visit to the UAE was to monitor the construction of the Malaysian pavillion at the Expo 2020 Dubai, which will start in October. It might sound unnecessary for a minister to watch trade booths being built, but it’s due to the scale of the expo. UAE basically built a freaking town in the desert just for the expo. At 1083 acres, that’s enough to fit 613 football fields inside it. And each of the 192 participating countries got their own pavilion, which is basically a building by itself. Malaysia’s pavilion itself is four-freaking-stories tall.

Unlike trade expos that will run for a few weeks at most, this one will be running for six months, so it makes sense to make sure that everything is in order for the 300 Malaysian companies that will be participating. Background img of Doha from tourist-destinations.com

Azmin must be enjoying the serenity of this part of his trip. The meeting was to discuss the potential of Qatar using Malaysia as a trade hub, and creating a travel bubble between Qatar and Malaysia. In fact, Langkawi might be the very first place for direct flights from Qatar under the initiative. So who knows, soon, you can literally follow Azmin pergi mana hari ni.

Strange. The second country in a row without memes created from it. If Azmin went to a country and no one memed about it, did he actually go there? Background image of Sound of Music from Culture Trip

Nevermind. Austria will make this trip come alive with the sound of our bawang rangers.

The trade mission to Austria was to look for potential investors, with some Austrian companies in renewable energy expressing interest in investing in Malaysia. They even posted a nice picture of their Economic Affairs Minister and Azmin on the Austrian minister’s page after their discussion and…oh right. Our bawang army spammed the Facebook page with 28,000 comments, and asked the Austrian ministry to keep him there, or if they prefer give us back a loaf of bread in exchange for him. Another commenter asked Azmin to reopen parliament, so he could enact an anti-bullying law to save himself. A taster of the 28k comments. Screencap from FB This was supposed to be a routine trip. Azmin came here to sign an agreement to expand the Malaysian-Turkey Free Trade Agreement, which will now include investments as well as e-commerce. They also looked into a potential deal for both countries to jointly secure more vaccines.

Then the Hagia Sophia incident happened. An overeager tour guide posted an Instagram picture of him with Azmin, and mistakenly captioned it as with “Azmin and his family”. That mistake was soon corrected, but Malaysia’s Internet bawang rangers never forget. His family was harassed through social media for illegally travelling, so they attempted to prove that they were in Malaysia by…posing with the TV3 logo on a screen. Probably not the most fool-proof method, as this just led to more harassment. He brings in memes AND investments

If we were to judge on general social media sentiment alone such as the 28k FB comments bashing him on the Austrian Minister’s page, Azmin isn’t currently on the top of most people’s favourites list. At the same time though, it’s gonna be hard to deny that he looks like he’s pretty good at his job since, other than memes, most of these trade missions resulted in confirmed deals as well as potential foreign investment coming in.

So whether you hate him or just dislike him, you might need to admit that Azmin is doing his best to contribute to the Malaysian economy….or at the very least, to our meme economy. Original img from Know Your Meme