Malaysians can only get to see snow when TV stations spam their Christmas specials. And with no experiences making snow angels and tossing a snowball (we only get to do it in i-City), or just feeling chilled to the bone when it rains for more than a couple of hours, how can Malaysians even tahan the snow? But did you know, there are a couple of Malaysians out there who are doing their best to represent us by competing in winter sports?

If I became a winter sport athlete

Yup you heard that right, a few Malaysians have already formed their very own alpine ski team. This sport involves skiers racing downhill while maneuvering through the snow covered slopes. The team already competed in various winter games for the past few years, and has been trying to put Malaysia out there in the winter sports scene.

But in a country like Malaysia where it only rains, or occasionally hail, why did the idea even came up in the first place? Did they started because someone slipped on a bowl of ais kacang like a boss? CILISOS managed to get in touch with one of them to find out more.

Our ski team is made out of… Dr M’s grandchildren?!

Well, partly. Our team was made out of Othman Mirzan, his sister Khadijah and Jeffrey Webb. The Mirzan siblings are in fact the grandchildren of former Malaysian prime minister Tun Dr. Mahathir Mohamad, and very avid skiiers who used to play the sport during family trips. Khadijah was in the team for a couple of years, but has since retired to fully pursue her academic commitments.

“He doesn’t like the cold so he doesn’t come to the races but I know that he’s very proud of what we’ve done.”

“At the end of the day his mantra for his years in office was ‘Malaysia can’ — so being able to represent Malaysia in a field that has never been represented before, for me, that is pushing the envelope and what he was and is all about.” – Othman Mirzan as quoted by The Star 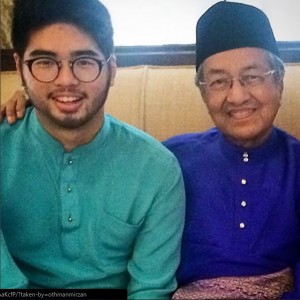 As for Jeffrey Webb, he was born in KL but moved to the U.S. at the age of 5. Already a competitive skier in training in the U.S, Jeffrey’s coach suggested if heWait would like to ski for his native country. He got really interested in joining the Malaysian team when he heard his father mention how Othman started Ski Malaysia through a magazine.

According to Othman, the idea all started as a joke with his siblings during their family trips. Calling themselves the Malaysian ski team (because they were the only Malaysians seen skiing there), his passion for the sport had him trying to turn his cool idea into a reality since the age of 17.

“From that, the idea kind of grew. It started out as let’s see if this is viable and then we figured out it was viable we had to see what it takes and then at the end of the day it was just putting in the sweat and the tears to make sure that happened.” – Othman Mirzan as quoted by Olympic Council of Asia

Although the Malaysian Olympic Committee were enthusiastic about Othman’s idea, they didn’t see how a 17 year old could form a national team, especially of a sport climatically impossible to practice here in Malaysia. But after more than a year of consideration, they finally approved it and thus began the many peaks of their journey.

So where do they even practice? What have they achieved so far?

Obviously, there isn’t a mountain of ais kacang in Malaysia to ski on. The team trains at different locations because they still have classes to attend. Both of them are currently located in the U.S, where Othman studies and trains at the University of Colorado Boulder, and Jeffrey trains at the Mission Ridge Ski Team in Washington. During their off seasons, these athletes are in charge of their own physical conditioning and does their best to exercise and hit the gym as often as possible. The training isn’t just so they could give their best on the mountain slopes, it’s also to prevent injuries as well. Othman himself mentioned he had personally suffered broken ribs, dislocated shoulders and fingers, experience frostbites, and even concussions!

“…it’s the thought of pushing Malaysia into the history books that keeps me going.

…as an individual who’s racing it would be best to set an example and to see who comes forward with experience to form a team!” – Othman Mirzan

Although only running a boutique operation, Ski Malaysia’s recent achievements include a run in the 2017 FIS (International Ski Federation) Alpine World Ski Championships (a world class winter sporting event held since 1931). It was the first time Malaysia was represented in the championships. Othman went for the run, and was only armed with the support of the President and VP of Ski Malaysia during the race. He completed his first run there, but faced an error and crashed out of the race.

Although Othman faced a wipe out during his time there, he did not give up. He packed up and moved on to Japan to face another run.

The team in Sapporo

Not long ago, Othman and Jeffrey finished their run on the mountains of Sapporo for the Asian Winter Games (a once every four year event by the Olympic Council of Asia), placing Malaysia 8th out of 19 nations competing there in their respective discipline. Certainly a great feat placing a tropical country in the winter games along side world class skiers. Are we looking at the next Lee Chong Wei(s) in the coming Winter Olympics? 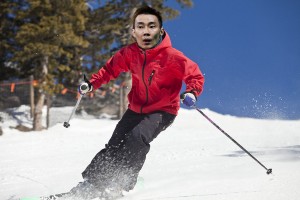 Othman and his team has already set his sights for the upcoming Winter Olympics at PyeongChang South Korea in 2018, and Beijing in 2022.

But how successful can Malaysians be in a winter sport?

The ski team are currently aiming to qualify for the Winter Olympics. But did you know a younger and more flexible Malaysian had already beat them to it? Jeng jeng jeng… But not exactly though, because it’s the Winter Youth Olympics. Meet figure skater Chew Kai Xiang. When he was 17, he officially became the first Malaysian to participate in a Winter Olympic game in 2016, although it’s the youth Olympics. Kai Xiang took a year off school to train in Osaka, Japan and went to Lillehammer for the Youth Olympics.

But what’s even cooler is that Chew Kai Xiang actually wasn’t the first choice, but this guy.

Pic from The Star

Julian Yee Zhi-Jie qualified for the Youth Winter Olympics but was replaced by Kai Xiang because he was getting too old to qualify for the youth games, as he was over the age of 17 when the games were held, and Kai Xiang had to step up and take his place. It was unfortunate because Julian had won medals in past events, but fret not as Julian is also eyeing on the Winter Olympics in 2018.

These sportsmen definitely show how Malaysians can qualify for winter sports although we’ll never get to build a snowman. Their dreams might sound far-fetched, but an unlikely team of people from Jamaica had accomplished a similar goal as well. Jamaica managed to form a bobsled team and participate in the 1988 Winter Olympics. Their participation was so historically astounding, a movie (Cool Runnings) was made based on their accomplishment.

It isn’t too late for Malaysians to join them

“Malaysia has never featured in the Winter Olympics and I believe that the time has come for us to make our debut.

Other Asian countries like India and Thailand already have their own national skiers … Malaysia should have a national skiing team too.” – Othman Mirzan as quoted by The Star

Despite Othman and Jeffrey being the only members of the ski team, he’d like more Malaysians to come forward, pick up the mantle together, and grab the opportunity to represent Malaysia in other winter sports like ski jumping, cross country skiing, free-style skiing and biathlon (a combination of cross-country skiing and…rifle shooting! kewl).

Perhaps it isn’t a sport for anyone due to the nature of the sport, and the need to travel to specific terrains required to train, plus it’s evidently a costly sport to play. But if you’re really want to give it a go, you can contact them here.

“In Malaysia right now, football and badminton are the main sports, but we’re really hoping to show people to look beyond that and consider other options,” – Othman Mirzan as quoted by the Olympic Council of Asia

So, here’s to wishing Ski Malaysia and other winter sport athletes success in their future competitions, and also to Malaysians out there who wish to join them, or start an uncommon sport. Quidditch anyone?