Jho Low may still be missing, but his name so far remains synonymous with fraud, money laundering and corruption. Which is why it’s a pretty big claim to call someone Jho Low 2, except that’s exactly what The Star said about a certain Malaysian businessman by the name of Tedy Teow.

Now coincidentally we had also been looking into this Tedy Teow guy since last week, so we guess you can say ‘great minds think alike’? But anyway, back to Tedy Teow: just who is this guy?

He first made headlines for running… a pyramid scheme cafe? We got this image from his own company’s website. Image from MBI International

Tedy Teow Wooi Huat, who formerly went by the name Terry, certainly had a penchant for wheeling and dealing. It’s been said that when he was a schoolkid in the 70s, he used to bring stuff like pencils, combs, books and other various items to sell at school.

By the 90s, Teow apparently saw that mobile phones are bound to takeover the world, and so in response, he launched a chain of shops in Penang called CTI Mobile World. While he was said to have founded CTI Mobile World in the 90s, conflicting reports place that date to be February 2000, which is pretty amazing considering that by March of that year it would get acquired by Seto Holdings Inc, a US-listed company.

We couldn’t find out what he went on to do after that, but what we do know is that by 2008, he had a new venture: Island Red Cafe. Apparently claiming that they have the ‘best coffee’ and a ‘new spirit of coffee culture’, Island Red Cafe was more than just a chain of coffee shops. We found some blog postings from around that time that listed down how Island Red Cafe worked, and it seemed to be a hybrid blend of a restaurant chain with multi-level marketing. How it works is like this:

2. If an area has 50 slots, a new Island Red Cafe branch would be opened, and the investors become shareholders.

3. Shareholders would allegedly get a number of benefits, such as:

We also somehow found a 5-minute ad for Island Red Cafe that’s still online and, uh, well, you can watch that below:

The amount of returns one could apparently get after investing would’ve ringed some alarm bells, but if Island Red Cafe really did serve up a lot of customers, it’s not impossible they could rake in enough to cover these expenses to shareholders right? Indeed, it was marketed as an easier way for people to own their own franchise. However, the guaranteed returns starting at RM300/month would have been a clear sign of a ponzi scheme going on, along with the extremely high investment returns (they claimed to be able to triple your investments).

Well unfortunately, we found a number of anecdotes about Island Red Cafe’s lackluster food and poor service, and it seemed as tho by mid-2009, many of those shareholders had apparently stopped getting their monthly returns and food vouchers.

This would be far from the end of Tedy Teow tho.

Tedy would bounce back with a shiny new investment company

Perhaps he was just diversifying his business, but before he was sentenced to jail, Tedy had ‘set up’ another company called MBI International Sdn Bhd in 2009 (MBI apparently stands for Mobility Beyond Imagination). We use the term ‘set up’ a bit loosely here because another to a 2017 report, a Companies Commission of Malaysia report showed that MBI International Sdn Bhd was actually registered under Teow Mooi Goay and Teow Ee Meng (his son).

As for what MBI International actually does, it also depends on who you ask. While it seems to bill itself as an investment company, MBI’s credit report lists its nature of business as ‘operating convenience stores, dealing in body lotions, shampoo products and general trading’. It also seems to love putting its name out there as a frequent sponsor of events and corporate social responsibility such as the 2017 Penang Bridge International Marathon. Heck, it even has its own line of MBI International smartphones!

We have no idea what a 3D smartphone is. Image from Multicom on FB Image from Wikipedia, by angys

Now we’ve covered the bitcoin mall before, but the TLDR is that MBI International launched the mall with its own ‘digital currency’ called Mcoin, which you can use to buy and redeem stuff from M Mall.

NAH, BACA:
Datuk, Dato', Tan Sri and Dato' Pahlawan - What's the difference between all these titles?

Apparently, to get these Mcoins, you’d first have to become an MBI member. And how do you become an MBI member? Well, you have to pay for various ‘packages’ that cost anywhere from USD100 to USD15,000. Only by becoming a member and investing some money into the scheme will you get the ‘virtual currency’ to spend at the M Mall. Furthermore, they claimed that the more you spend on your membership for these coins, the higher your potential returns. Members who recruit new members also get commissions; these are known to be pyramid scheme calling cards. However, Bank Negara caught on to the act, and in May 2017, redflagged MBI for its scheme. M Mall would also be raided, while 91 bank accounts linked to MBI International were frozen. Tedy woud later be charged with two charges of issuing unrecognised payment instruments. Eventually, in 2018 he was fined RM3 million, while MBI International was fined an additional RM2.5 million. MFace International, a company under MBI was fined RM7 million as well. 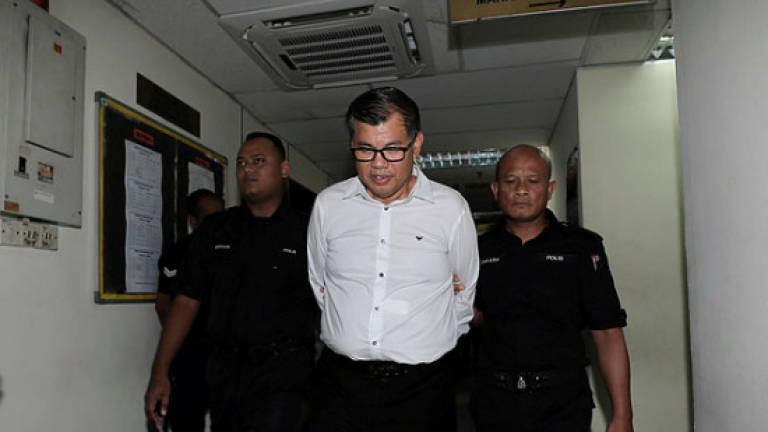 Tedy at court. Image from The Sun

By 2019, his infamy had yet to fade, as hundreds of Chinese nationals staged a protest in front of the Chinese Embassy in Kuala Lumpur, asking for help from the Chinese govt to recover the hundreds of millions in investment they had poured into MBI International.

Meanwhile, Tedy’s son was even held at knifepoint after three Chinese nationals broke into Tedy’s house looking for him. They only found his son, and demanded that he give them back their money. His son managed to yell for help, leading the three to escape – but not before dropping off two fake bombs at the house.

2020 was a relatively more quiet year for Tedy. The only mention of him we found in the newspapers was in The Edge in a report about Ooi Chieng Sim – a former executive chairman who was charged with drug trafficking. According to The Edge, many had linked Ooi to Tedy, however there’s been no evidence to prove that.

2021 however was a lil more unfortunate for him. On the 3rd of January, the police held a press conference to inform that they are on the lookout for Tedy and his two sons Teow Ee Meng and Teow Chee Chow, after busting a Macau scam allegedly run by them.

According to Johor police chief Comm Datuk Ayob Khan, the syndicate would try to get victims to transfer money into a mule account. The money would then be transferred again to yet another mule account belonging to a different company, before being used to invest in Bitcoins and to purchase properties totaling up to RM336 million.

Police have so far found 91 different mule accounts, attributed to 73 company accounts and 18 personal accounts. Tedy is their main suspect, while his two sons were placed in two different companies as proxies to buy properties.

“This modus operandi aimed to avoid detection from the authorities and was their way of money laundering.

Since June last year, some RM25 million has been used to make progress payment for 100 condominium and commercial units in George Town,” – Comm Datuk Ayob Khan, as quoted by The Star Datuk Ayob Khan explaining the Macau Scam syndicate that they had busted. Image from Kosmo

He added that Tedy is believed to be in Danok, Thailand right now, while his two sons remain in the country. He had apparently fled the country in January 2020. Bukit Aman’s commercial crimes investigations dept has in response formed a task force to track him down, so it remains to be seen if he would be brought back to face the courts.

Update: On July 23rd 2022, Tedy Teow was detained by Thai Police in Songkhla for money laundering, allegedly using money from online gambling business to build an entertainment complex in the district. He’s now awaiting deportation to China, where he’s wanted for questioning over the investment scam mentioned earlier.

So for now it looks like, despite the comparisons, “Jho Low 2” was actually caught.