[Update 29/8/2018: Datuk Hasanah Abdul Hamid has reportedly been arrested when she was called to the MACC headquarters yesterday.]

On 21 May, everybody reported that news portal Malaysia Decides reported that police raided the home of a woman, said to be working for former Prime Minister Datuk Seri Najib Abdul Razak. It was reported that the woman was the head of a powerful intelligence ring within the Prime Minister’s Department!! And that cops are investigating her over allegations that Najib handed her important documents two days before GE14. Oooh what could those documents contain? Probably not receipts for Tupperware products.

But when Commercial Crime Division police went to the Seri Kembangan house on Friday and Saturday, they couldn’t recover the documents. They also sealed two buildings in Putrajaya and Jalan Bellamy from where the unit operated, yet no documents were found. The cops believe that it could be stashed away in one of the safe houses operated by the innocently-named Research Department. Anyway, the woman had gone on leave pending the probe.

There have been WhatsApp images going around of the possible identity of this woman. Being shared on WhatsApp

Cilisos did a Google Search of those images (see above) and learned that her name is Datuk Hasanah Abdul Hamid. The photos on WhatsApp lead to various sources – the big wall emblem leads to a few blogs, the collage of Hasanah leads to the Prisons Department’s page (the only credible source we found), and the photo of her receiving the plaque whilst shaking hands with the police officer is from a blog.

Then we did a quick search on her name on the PM’s Department’s website jpm.gov.my reveals that she holds the General Director’s post in the Research Division.

The name matches. Screenshot from jpm.gov.my

Dang, if it’s really her, then this is so badass! She looks like any regular, unassuming tudung mak cik, but don’t let her looks fool you. She’s like M from James Bond wei. Bad to the bone

So what is the Research Division? A Google search on Research Division yields nothing other than a Wikipedia page, but we were able to glean more info from there. According to a US embassy cable dating back to 2007 that was leaked by Wikileaks, the Research Division is actually the public name for the Malaysian External Intelligence Organisation (MEIO), the country’s main foreign intelligence agency. 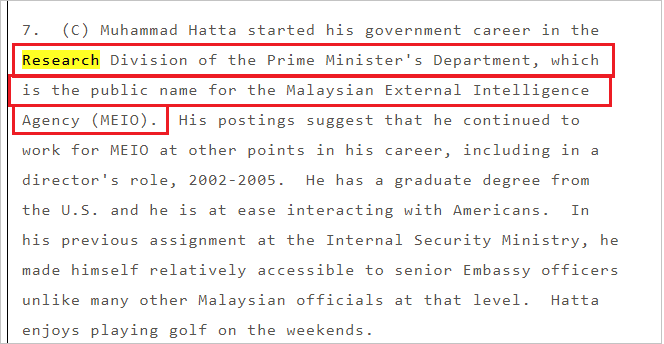 Muhammad Hatta mentioned above, was the Secretary of the National Security Council and was said to have served as MEIO’s Director General from 2002 to 2005. Don’t bother Googling him coz you won’t find anything…except the Indonesian PM, but he’s… a different… guy The Research Division/MEIO is not a new body either, though we can’t find an exact birth date.

“The Malaysian Special Branch and External Intelligence Service [MEIO] has a long history of managing rebels in their midst that goes back to the Malayan Communist Party of the 1940s and ’50s.” – plucked from Wall Street Journal

In fact, Hatta had started his career in MEIO in 1976, though he moved around jobs before becoming Director General in 2002, according to the Wikileaks document. 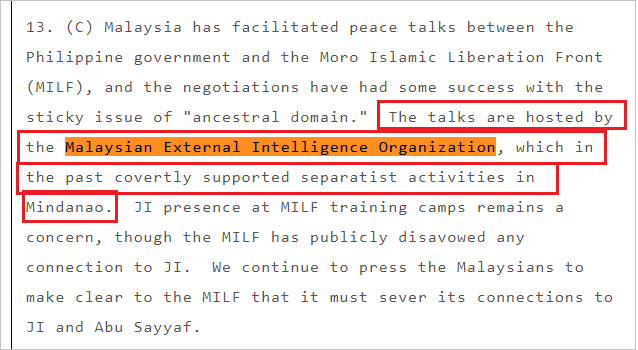 We found this photo of Hasanah with the Bangsamoro secessionist group in 2014. Img from bangsamorodevelopment.org

Quoting unnamed government sources, Malaysia Decides said the unit had massive funding and was used to keep track of government critics in the country and abroad under the Najib administration, The Sun Daily reported. The top officer, backed by 300 personnel, reported only to Najib.

“It basically operated as a spy agency, and all its activities were tailored at keeping the Najib in power. They even had operatives stationed abroad.” – Malaysia Decides quoted an unnamed well-informed source, plucked from The Sun Daily As we were writing the article, there have been updates to the case. PM Tun Dr. Mahathir has said the Government will disband the agency.

“I have to review. I haven’t been fully briefed…I know their activity is not good for the government, we don’t want to be spying on the people. We don’t need them, including their intelligence. I think we are quite intelligent now.” – Tun Dr. M, quoted from Malay Mail

Watch the video of that press conference below:

NAH, BACA:
The US is spying on other countries by selling them this machine. Malaysia bought one.

Hold on… MEIO is not the only spy agency in Malaysia We found 4 other Malaysian intelligence organisations, they are: This is the one you probably know. The Special Branch also goes back to the late 40s, where they fought the Communist movement, but at least it isn’t as mysterious as the Research Division coz there’s information about them. Modeled after the UK’s Special Branch, ours is attached to the Royal Malaysia Police.

The SB is empowered to collect intelligence on internal and external threats to the nation, subversive activities, extremist activities and activities of sabotage and spying. They’re the ones you often see taking down terrorist gangs or suspects in the news. And they’re empowered to advise various departments and agencies (under PDRM and other related agencies) on the necessary course of action.

They were linked with a hacking company in 2015

The Defence Staff Intelligence Division is the military intelligence agency of the Armed Forces, as SB is to PDRM. Its role is said to be equivalent to the US Defense Intelligence Agency, which specialises in defense and military spying. Then it informs civilian and defense policymakers about the military intentions and capabilities of foreign governments.

DSID is headed by army Lieutenant General Dato’ Paduka Abdul Hadi Haji Hussin (whose pangkat is known as Director General) and reports to the Minister of Defence (now Mat Sabu) and the National Security Division.

It was linked 2 years ago to software company Hacking Team, when leaked documents showed DSID was one of its clients for controversial government spying and surveillance tools. The agency allegedly paid this company RM2.32 mil between 2012 and 2015.

In other news, Sarawak Report claimed that Najib paid RM7 million to “Ketua Pengarah Perisikan Pertahanan” (DG of the DSID) on 8 April 2013, about a month before the 5 May general election. Formed on 7 November 1969, the Royal Intelligence Corps aaaaas usual, has its origins in fighting communists. Always the communists. So the commies were causing trouble and stuff in the Federation when a young Private Hashim Rauf joined a British spy team. He showed good potential and convinced the British to recruit more local spies.

A group of young non-commissioned officers from the Rejimen Askar Melayu, Rejimen Kereta Perisai Persekutuan and Jurutera Persekutuan were then assembled and trained to spy. After Merdeka and Malaysia’s formation, the group went through some shifts and was renamed. Finally in 69, the Intelligence Corps was officiated by General Tengku Osman Tengku Mohd. In 1997, it was formally bestowed the “Royal” title in front of its name.

Besides the usual spying, this group specialises in psychological warfare, reconnaissance and counter-intelligence operations (which means spying to protect against spying 🙁 ). It also manages the propaganda and counter-propaganda effort of the Army. Additionally, the corps does background checks on recruits when they first enroll in any training courses. The Chief Government Security Office or CGSO is a unit under the Prime Minister’s Department responsible for providing ‘security protection’ on all government assets, such as federal buildings, submarines (ahem) and so on. CGSO also provides ‘security clearance’ for the candidates who wish to join the civil service, to ensure that he or she is not a member of any extremist groups, kinda similar to the Royal Intelligence Corps.

Oh, btw, this is the only agency with its own proper website unlike the others, who are probably more uhh undercover. Actually all the other countries also have have intelligence organisations. Some more than others and some have very fearsome reputations, MI6 from the UK (James Bond’s agency), one of the oldest existing intelligence agencies in the world, for instance. Then there’s the CIA, the Australian Secret Intelligence Service (ASIS), the German Bundesnachrichtendienst (so fearsome, people can’t even pronounce it) and the Israeli Mossad.

These real spies’ exploits could make James Bond movies seem like a vanilla lollipop. During their famous Entebbe Rescue (aka Operation Entebbe), Mossad agents disguised themselves as Ugandan soldiers and one agent was even made to look like the president of Uganda, Idi Amin. They created a perfect replica of Amin’s motorcade and fooled erbodeh. The agents freed all the Israeli hostages and even destroyed many Ugandan Jets along the way.

In reality, a nation is dependent not only on its army but also on its intelligence agencies to counter external and internal threats. These intel agencies know everybody’s dirty secrets and that is exactly the fact that makes them so dangerous. Across the globe, they all pretty much have the same functions… jaga tepi kain orang lain. WHICH IS WHAT MAKCIKS DOOO!!

Guess we should never ever underestimate makciks…