You may have seen the viral video of a crocodile swimming in the Klang River that caused a lot of hooplaboopla a month ago. But did you know that the crocodile LEFT?! Its first sighting was its last sighting, and all this after Majlis Perbandaran Klang (MPK) had already put up warning signs that say: “Awas. Anda berada di habitat buaya”. To add to the insult, Perhilitan and Bomba spent time and manpower regularly monitoring the river to make sure it doesn’t pose a danger to the public. Then, MPK made a cautionary video (below) for people’s safety, plus, they had hopes of making RM10mil out of it as a new tourist attraction in Klang. And.da.fler.just.LEAVES.

But what da heck was a crocodile doing in the Klang River in the first place? Most of us would think the Klang River is sooo dirty that no animal can survive in it, unless they’re mutants. “It may have wandered from its natural habitat due to various reasons and was just swimming back,” explained Perhilitan Director Abd Rahim Othman.

There are a couple of theories as to why the reptile didn’t stay (Klang gangsters is not one of them) – Zoo Negara Assistant Curator Herman Bernard guessed it could have been frightened off by the crowds that gathered at the riverbank to see it. Or it could have left in search of fellow 4-kaki kakis, coz crocodiles are social reptiles… possibly to pikat girlfriend if it was a male (literally buaya darat). This saltwater crocodile captured in the Philippines is the largest one ever captured, according to the Guinness World Records. Image from BBC

The 2m-long scaly beast swimming in the Klang River was identified as a saltwater crocodile, known locally as buaya tembaga, and informally as saltie. Don’t be fooled by their funny name, salties are the most aggressive of all the crocodile species and the largest of all living reptiles.

Males can grow up to 6.3m and weigh between 1,000-1,200kg, while females only grow up to half that size at 3m-long. It’s like looking at Shaquille O’Neal and…anyone he’s ever dated. Salties are apex predators, capable of explosive bursts of speed in water (24-29 kmph), to either DROWN their prey, or they would just SWALLOW them whole! They have massive biting strength with their wide snouts…all the better to eat you with. In the event that you come across one, click here to know what to do.

Poking its eyes is the best way to escape, but whacking it on the head might work too. Faster go practise at the arcade.

Whack a Gator! Image from taringa.net

Most importantly, DO NOT carry a clock with you, especially ones that go tick-tock-tick-tock. Just kidding. Never smile at a crocodile. Image from disney.wikia.com

One legendary Malaysian saltie named Bujang Senang used to terrorise Sarawakians living along Sungai Batang Lupar for many decades and supposedly killed 13 people, until it was was shot dead in 1992. On the list of largest crocs ever recorded, Bujang Senang comes up at No.4! How impressive is that? Video of Bujang Senang by Wong XinYi WXY on YouTube

Crocodiles are actually not very common in the Peninsular. They are mostly found in Sabah and Sarawak, especially the latter. As a matter of fact, Sarawak is infamous for having a lot of man-eating saltwater types, and it is where most crocodile attacks in Malaysia are recorded (40 of the 42 attacks recorded in the last 5 years took place there). Croc attacks are also the most common type of wildlife attacks registered, followed by wild boars (36 cases), and snake bites (19 cases).

Apart from random sightings, captures and attacks, there is not much data on crocodile breeding populations in the Peninsular, except for two (possible) spots – the Linggi-Rembau River between Negeri Sembilan and Melaka, and possibly the Nipah swamps of Pulai River, Johor. Definitely NOT the Klang River! So despite seeing the 2m-long fler a month ago, don’t get your hopes up.

Although it’s rare now to see these scaly creatures in the Klang River, this wasn’t always the case…

Did you know the Klang River used to be a crocodile haven in the 60s and older? 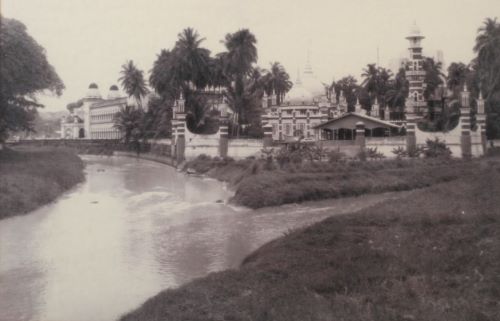 Sorry, we kenot find old photos of crocs in the Klang River : ( Image from The Star

Some netizens said that when Kota Bridge was first opened to the public in 1960, crocodiles were often sighted in the river below, and occasionally some could be seen chilling by the riverbank to catch a bit of sun. We tried to hard to find old photos of the Klang River and crocs but there were none. 🙁 This postcard of a crocodile caught at the Klang River is being sold online. Click to buy

Apparently the reptiles had been residing at the Klang River for a long time. As far back as the 1920s, when KL was less developed, Victoria Institution’s students couldn’t resist tormenting the scaly monsters by throwing stones at them.

“Mr. B.E. Shaw (the Headmaster) used to shoot crocodiles on the riverbanks, mostly behind the HM’s bungalow. The crocodiles would come up to sun themselves and the HM would shoot them. By the time Mr. Richard Sidney took over there were not too many crocodiles left.” – George Yap Swee Fatt, former V.I. student

Ohhh, now we know why there aren’t any crocodiles left -_-

BUTTT it’s probably not so much the bullying as it is the POLLUTION that drove the reptiles away from the Klang River! Ew. Any crocodile in its right mind wouldn’t stay there. Original image of Klang River from NST

Those days, the water in the 120km-long river was crystal clear and you could see fishes swimming, Siew Wei Hann, 58, a beef noodle seller recalls. Today, this is SO NOT the image we have of the Klang River – today, the river looks uninhabitable, inhospitable, vegetable and teenage mutant ninja turtle. Aiyoyo, Klang river. What happened to you? 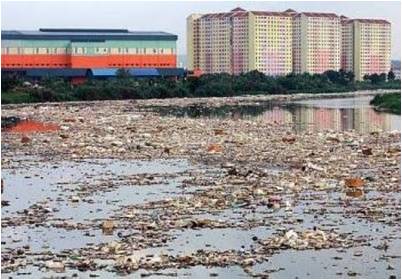 It is mainly polluted with plastic bags, bottles, and polystyrene containers, though other weird things have been found floating, such as a kayak, motorcycle helmets, footballs, sofa sets, refrigerators, washing machines, dead bodies, and stuff. A study has shown that the Klang River is the dirtiest river in the whole country in terms of the amount of rubbish found. An estimated 77,000 tonnes of garbage are dumped into it each year.

People like to give Klangites crap for the river, but the majority of rubbish and other grossness actually comes from KL *cough. The Drainage and Irrigation Department reported that 500 tonnes of waste is DUMPED DAILY in KL’s Sungai Bunus, which then flows into the Klang River. Additionally, the river is also being polluted by sand-washing in… KL! Just saying.

Just be careful la, coz buayas still make an appearance from time to time

Even though crocodiles no longer live and make their nest at the Klang River, they have been known to pop by from time to time. Aside from this recent case, one popped up in the river near Old Klang Road in October 2016. And there were FOUR spotted in 2004 at the riverbank near Kuen Cheng Girls High School. Maybe they miss their old home, we dunno. So we would still advise caution.

As MPK’s video advised, avoid going into the water (but we’ll bet the pollution is deterrent enough), respect the AWAS signs, don’t get too close to bushes by the riverbank, and whatever you do, DO NOT try to tackle the reptiles if you see them.

Better to be safe than sorry, because…