Penang has been in news spotlight recently, but not exactly for very pleasant reasons. Even the attention and criticism of high profile politicians from DAP, UMNO and MCA have been drawn to the issue, fueling the buzz surrounding this Penang tunnel project under the sea.

The issue exploded when 2 company directors were arrested by the Malaysian Anti-Corruption Commission’s (MACC) in relation to their investigation of the Penang undersea tunnel project. More than one month later, even when the MACC had uncovered no findings, the project is still the point of contention of the news and politicians.

So, just how big of a scandal is this project? Why are we still reading it on the news after more than a month??! And more importantly, why did Penang build a tunnel instead of a simple bridge? Let us break the whole situation down for you.

At first, MACC was investigating allegations of bribery. But suddenly… 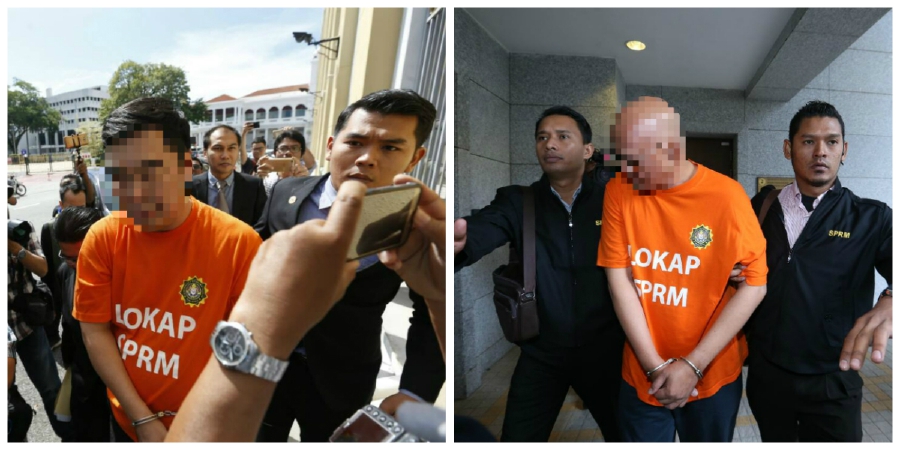 The 2 directors arrested by MACC. Image from New Straits Times.

Lets start at the very beginning, before the directors were arrested by the MACC. The planning of the undersea tunnel project began way back in 2011, and the agreement between the Penang statement government and the contractor was signed as early as 2012. But fast forward many many years to today, the lack of progress of the project raised many questions, despite payment being made (as some folks have claimed).

Because of that, reports were lodged to the MACC, and they launched an investigation. The MACC raided 43 locations in Penang and Kuala Lumpur, from offices of the companies involved to Penang state government offices in Komtar, recorded the statements of 76 people, and also made 4 arrest in the process (so far).

At first, the MACC’s investigation was focused on alleged bribery of politicians involved in the project, with some claiming that MILLIONS were paid by companies as bribes to obtain the project. But later, the focus of the investigation has been shifted. Instead, the MACC is now investigating if the RM305 million reportedly paid by the Penang state government is too much or not.

For reference, the Works Minister Fadillah Yusof said the federal government only paid a RM19 million consultation fee for a 30km highway in Johor. Granted that this is underwater, but really worth 16 times more ah?

Penang says they haven’t paid for the tunnel, but they did pay for… 3 other highways?

The undersea tunnel is actually only one part of the Penang MEGA ROAD project. Aside from the tunnel, there’s also 3 other highways planned, collective known as the “three main roads” project. The 3 highways will be built on the island itself, while the undersea tunnel will connect George Town to Butterworth on the mainland. The details are as follows:

Together, the entire project (tunnel + the 3 highways) will cost a total of RM6.3 billion, so the RM305 million mentioned earlier was just a small fraction paid for consultation! In light of the growing allegations, Public Works Committee chairman Lim Hock Seng released a cost breakdown of the projects to clear the state government’s name once and for all:

So according to the state government, RM305 million is the total cost of the studies and designs for BOTH the projects. The committee chairman also adds that the state government has only paid for the 3 main road project (RM208 million), and they haven’t paid anything for the undersea tunnel so far. Regarding the delay surrounding the tunnel project, the committee chairman said that since the tunnel would only begin construction in 2023, so there was no pressure to complete the survey on it now. Hopefully these guys got the memo. Image from nst.com.my

However, in regard to the method of payment for the studies and design for the 3 road projects, the Penang state government’s has invited more flak from their opponents when they decided to pay by giving away 2 pieces of land.

“We do not have money, so we paid through a land swap.” – Lim Guan Eng, Penang Chief Minister, quoted from Free Malaysia Today

News about the project gets hard to follow, because the subject keeps changing! Unedited image from The Little Mermaid by Disney.

Before we continue, we have to introduce Consortium Zenith and China Railway Construction Corporation Limited (CRCC). For the project, something called a Special Purpose Vehicle (SPV) was set up by a few of the companies involved. A SPV isn’t actually a car or anything, but more like a company established for a specific or temporary purpose, which in this case is to complete the Penang projects. Consortium Zenith is the SPV in this case.

Going back to where we left off, the Penang state government made payment to Consortium Zenith by giving them 2 pieces of land totaling 3.7 acres (161172 square feet) at RM1,300 per square feet. If you’re wondering if paying with land is a thing, it is, but the company only gets to hold the land for a period of time.

But the fight between MCA and Penang is no longer about the land swap now. Instead, they are going back and forth on whether or not CRCC is a shareholder of Consortium Zenith. It seems that back in 2013, the Penang government may have “mistakenly” listed CRCC as a shareholder in the SPV, while in fact, CRCC is merely the main contractor engaged by Consortium Zenith to do most the construction. Transport Minister Liow Tiong Lai met with CRCC in Beijing recently, and has confirmed this himself. 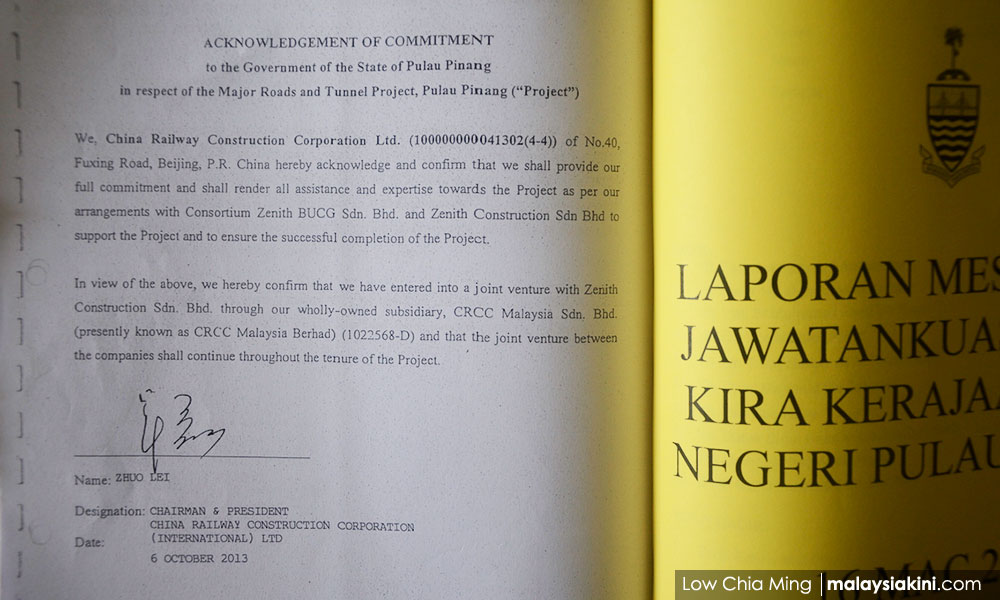 Penang did not address the “error” of listing CRCC as shareholder, it only continues to insist that CRCC is the main contractor of the project. Even until the writing of this article, the debacle over CRCC remains an issue. One can’t help but wonder if the upcoming elections have anything to do with the persistent verbal onslaught.

But actually, does Penang actually need another link/bridge/tunnel? Penang Island City Council (MBPP) Dr Lim Mah Hui, shares the same thinking. He elaborates that the roads in Penang city are narrow and not meant for high vehicular traffic, so bringing more cars to the island will probably make things worse. On top of that, the traffic of the second bridge (opened in 2014) is still not at its full usage yet. The current traffic is only at 14,300 vehicles daily compared to 25,000 expected by 2019.

Another question we should be asking is, why build tunnel and not bridge?! We didn’t really find a solid reason, but the reason might be because the federal government is refusing to approve a 3rd bridge, as Lim Guan Eng wrote in Malaysiakini.

“As compared to building a bridge, a tunnel costs at least twice the amount…

… if the federal government can give approval to the state government to build a bridge instead of the tunnel, the savings gained can be used to finance a toll-free bridge.” – Lim Guan Eng, quoted from MalaysiaKini

As for the fate of the project, we have to wait until MACC completes their investigation

In case you’ve already forgotten (because of all the blame blowing about in the news), the MACC is currently investigation whether paying RM305 million for the project was too much or not. One reason this might not have really been the focus of the on-going dispute between the politicians is because this is still an ongoing investigation. 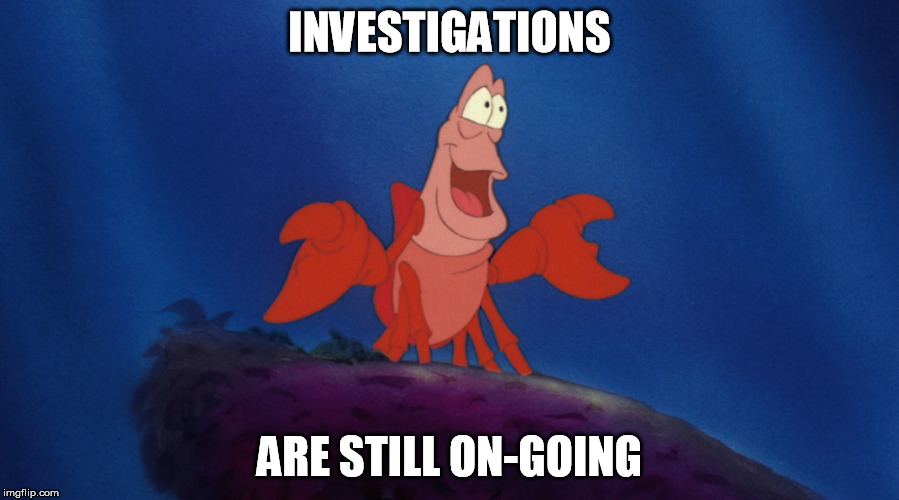 What’s interesting is, back in June 2017, Penang admitted that they’ve paid 17% extra in “civil and structure fees“, but said that overall, the amount paid was still within the acceptable amount set by the Board of Engineers Malaysia. What’s even MORE interesting is, CM Lim Guan Eng said that the MACC has actually investigated the tunnel project before! He said back in 2016, MACC initiated investigations but found nothing in the end.

“You ask us why work has not started. You interfere, you sabotage, how do you expect work to go on?” – Lim Guan Eng, quoted from Straits Times

The CM adds that because of the MACC probe, the future of the projects is in question now. So for now, we’ll just have to stick with the facts and wait till the MACC completes their investigation. Alternatively, you can turn up the volume of Chinese New Year songs and hope the bickering will stop soon.