So… MAAAAAYBE you’ve seen the new Tourism Malaysia logo on your social media recently? As you can see, a lot of people are not happy, taking to social media to express their disappointment. Unfortunately, it does seem that Malaysian gomen is defending the logo and going ahead with it anyway.

“Criticism is normal, we cannot get the consensus of the whole of Malaysia” – Tourism and Culture minister Datuk Seri Nazri Aziz, via the Star

But how efficiently are the Tourism Ministry using taxpayers’ money? We were curious to explore if Tourism Malaysia’s expenditure matches its results over the last few years. So as usual, CILISOS dived head first into… EXCEL SHEETS YAY!

Malaysia is ranked 9th in the world for tourism arrivals

On top of that, we’re rated the number 1 Muslim travel destination in 2017 – our country took the number one position for the third time in a row, outperforming other Muslim countries like United Arab Emirates (UAE), Indonesia and Turkey. Malaysia was also voted the best travel destination in Asia by the World Travel Awards Asia and Australasia 2016. Wahh… not bad wo. Except 2015 la, but two plane crashes will do that – Img from Tourism Malaysia.

Of course, in 2015, the industry saw a record 30% drop in tourists in the first 6 months of 2015. Some people attributed this to the MH17 and MH370 incidents, while others blamed BERSIH. Haiz. BERSIH always kena blame for everything. Img from newmandala.org

But according to the Tourism Ministry, no la! The protests show that ‘we’re a healthy democracy’ and because Westerners are used to all these street protests and rallies, so it’s no big deal.

“In fact, we have probably saved billions of ringgit in free advertising to show we are a healthy democracy!” – Tourism and Culture Minister, Datuk Seri Mohamed Nazri Aziz, via the Malay Mail Online

Thankfully, tourism receipts rebounded in 2016, growing 18.8%. Despite having less arrivals in 2016, we still made more money in total revenue than 2014. Amazingly, the gomen did this despite their budget getting slashed by 50% to just RM378mil. Considering Malaysia is raking in billions of ringgit per year from tourism, it looks like the budget allocated to the Tourism Ministry is well spent.

But wait… how the heck is Thailand’s tourism revenue TRIPLE ours!?

Below is the graph obtained from the World Bank, comparing tourist receipts from Malaysia, Thailand and Indonesia. Total tourism receipts of all 3 ASEAN adik-beradik, in USD. Img from The World Bank.

We felt it’s only fair – if you wanna analyze whether our tourism sector is really that great, we should compare to other countries like our neighbours. We chose Indonesia and Thailand, as all three countries have several similarities. We’re developing nations within ASEAN, we’re multi-cultural and highly dependent on tourism to contribute to our economies. Bonus point: Indonesia is a Muslim country just like us! We’re basically the adik-beradiks of ASEAN.

Based on World Bank data in the graph above, Indonesia’s tourism industry is kinda struggling –  they’re like the baby of the Malaysia-Thailand-Indonesia tourism family. But one adik is definitely more of an abang because Thailand makes US$48.5bil compared to Malaysia who only makes US$17.6bil. That’s almost triple our revenue! According to the World Bank, Thailand has the highest number of tourists arriving in their country (29.9mil) but Malaysia is a definite close second (25.7mil). So Thailand have only 4.2mil more tourists than us, but actually…

Malaysia kinda cheating a bit by counting Singaporeans as ‘tourists’

About 13 mil in 2016 or almost half our total tourist arrivals in Malaysia are… Singaporeans.

UPDATE: One of our friends from AirAsia has clarified this statement (thanks WF!). Singaporean tourists are only counted if they spend at least ONE NIGHT in Malaysia, which Tourism Malaysia is following international guidelines on. The low exchange rate is giving Singaporeans more disposable income, with more Singaporeans coming to Malaysia to shop for groceries, clothing or simply to holiday here. They’re mostly the middle-income group who come here to cut costs, since they pay a fraction of the price for the same stuff.  However, this number is dropping, thanks to the RM20 road tax on any foreign vehicles entering Malaysia, which resulted in a 7% drop in Singaporean arrivals in 2016.

But the Malaysian tourism industry has generally felt that Singaporeans should not be included in the tourist arrivals stats. Singapore also doesn’t count Malaysian land arrivals as tourists, which is significant, given that Malaysian tourists to Singapore only numbered slightly more than 1 million in 2017.

The Thai gomen, meanwhile, still counts Malaysians entering Thailand as tourists because the United Nations World Tourism Organization stipulated that ‘any foreigner who enters a country through proper entry points is counted as tourist.’

Oh, and not all tourists are made equal

Below shows a graph from the Thai Authority of Tourism (TAT), which shows how much an average tourist spends per day in Thailand, based on where they’re from. 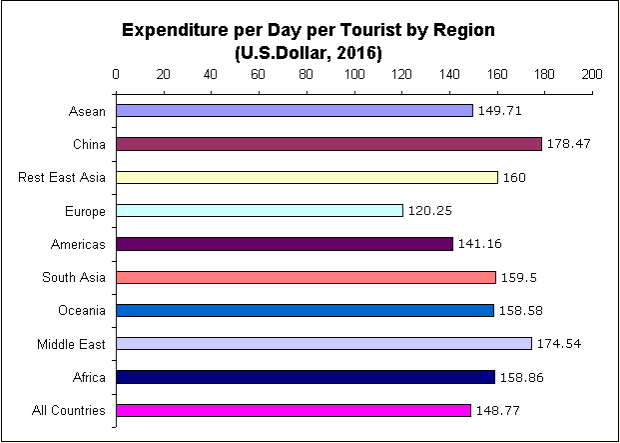 What? Asians actually spend more than Europeans or Americans Img from thaiwebsites.com

In Malaysia, a majority of tourists are from ASEAN countries. Only a small number of tourists who come to Malaysia are Westerners. According to this media release by Tourism Malaysia, the tourists that spent the most shopping in 2015 were mostly from Asian and Middle Eastern countries. Not one Western country made the list for top spenders.

Similarly, Thailand’s visitors are mostly from ASEAN countries and China, while Europeans as the third largest number of tourists visiting Thailand so there are definitely more ang mohs going to Thailand annually. These stats show that Chinese tourists actually spend the most per day in Thailand. They also found that Europeans don’t even spend that much – Middle Eastern and Eastern/Southern Asian tourists spend more than Westerners while they’re holidaying in Thailand.

The Ministry of Tourism and Sports Thailand also notes that Westerners spend at least 50 to 60% more per visitor, mainly because they stay longer in Thailand, typically stay two weeks or longer. Asians also have much less holiday days per year than Europeans.

So the key difference is basically that Thailand is focusing on increasing the yield per tourists rather than the number of tourists itself.

“This is another year that we will focus on quality tourism more than tourist numbers” – Deputy Prime Minister Thanasak Patimaprakorn, via Reuters

On the other hand, Bank of Indonesia found that US tourists spend the most in Bali. BUT Malaysians come in second place as top spenders, while Singaporeans spend the least (KIAMSIAP!).

Instead of just getting tourists to come, maybe the gomen should get people to do more stuff? To be honest, while we were looking for a featured image for this article, we wanted something recognisable as a Malaysian tourism icon – and only a few names were thrown around. KLCC (too tall), A Famosa (just used), and maybe the National mosque? Look on TripAdvisor for KL top 20 attractions, and you’ll see…

Looking at ThaiVisa’s forums or on Quora where they were asked whether KL or Bangkok was better, a large majority seems to think Bangkok is better, with a lot of them saying that Bangkok has more stuff to do. Everyone raving about Thailand je… Screenshot from Quora and ThaiVisa.

On top of this, Malaysia seems to be shooting itself in the foot, retiring the Malaysian F1 Grand Prix, and last minute cancellations of big international acts

“With tourists now opting for other countries, KL needs to be marketed as more than just a shopping heaven. Our city has much more to offer than shopping and sandy beaches. For most events with international acts, more than 35% tickets are from overseas” – Edy Fathullah, VP of SEA, Total Sports Asia

Tourism in Malaysia has become the second highest foreign exchange earner (after manufacturing) contributing 4.7% of GDP in 2016, so it’s pretty important that our industry keeps growing by showing tourists what Malaysia have to offer. Maybe if we take a few tips from our abang Thailand, we can increase tourist spending in Malaysia and someday beat them.

Malaysia is “a destination full of unrealized potential” with the main strength as the availability of a broad range of diverse attractions to suit all tastes, relatively affordable prices and largely unspoilt destinations – United Nations’ World Travel & Tourism Council (WTTC) via Tourism Industry in Malaysia

Share this article:
NAH, BACA:
Indonesia is moving its capital to Borneo... Here's how it could affect Malaysia